As someone who’s been absolutely ga-ga over Shining Force II since 1994 it’s more than a little embarrassing to admit that I hadn’t played through series starting point Shining in the Darkness until just last month, but here we are.  I’d like to pretend that this was just down to a fear of running into another Dinosaur, Carmine, or something slightly more interesting than the plain old truth but the fact is there are simply an awful lot of games out there and only so much Kimimi to go around. 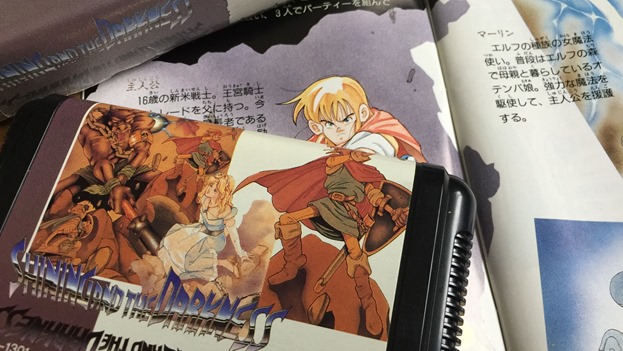 I want to start this blog post by talking about something that doesn’t normally get (nor deserve) praise in a 1991 console dungeon crawler – the excellent script as well as the fantastic localisation work that brought it to life for overseas players. Now at this point I could mention the wonderful plot twist that sees the delicate rescued princess cheerily join the party to dish out a demonic butt-kicking, or how the terrifying Big Bad admits he’s actually been a little bored since discovering he’s so powerful nobody (but you) can stop him, but as good as those points are it’s all the little details that really make a difference: There’s the beautiful variable-width English font with proper dangly bits for letters like ‘y’ ‘j’ and ‘p’. Battles concluding with ‘[Hero]’s party stands victorious!’ rather than the standard ‘[Monster] was defeated’. Magical herb water is sprinkled, spells are weaved, and powerful attacks land as awesome blows. It may not sound like much but small flourishes like these add that special little sparkle to a oft neglected part of the dungeon crawler experience and the game’s all the better for it.

It’s not flawless though, and a few problems typical of the era still raise their head from time to time: Japan’s nefarious Mephisto became Dark Sol in English, presumably to avoid the most enduring of all localisation sticking points, religion; and there’s a range of more minor details such as the kingdom of ‘Storm’ became ‘Thornwood’ and ‘King Storm’ being renamed ‘King Drake’ – probably because the poor soul deserved a name all of his own. But bar Dark Sol accidentally ending up with the same name as his own father everything else can be brushed aside as either a good editor’s personal preference or a mild case of the nineties, and there’s really no reason for most people to fuss over the authenticity of the official translated script when it reads as well as it does.

Of course there’s no point writing about Shining in the Darkness without taking a look at the great labyrinth itself, and it’s my pleasure to report that while I was busy bracing myself for a maze of Psy-O-Blade proportions the game instead offers a relatively compact and hassle-free experience that’s skewed in the player’s favour with no invisible walls, disorientating teleports or teeny-tiny grey buttons hidden in grey walls (sorry, Dungeon Master) in sight. Even a total wipeout sees your party’s souls whisked off by valkyries to the town church shrine with your XP and gold unmolested, and as the first floor of the labyrinth acts as a hub area to all the other parts it never takes more than a minute or two to get back into the action.

Other user-friendly help comes in the form of an automapping spell that costs just 1MP to cast and shows everywhere you’ve walked as well as your exact coordinates and direction, a quick bit of pop-up text informing you where you are when you enter or clear a trial, and saving the best bit for last – the designers were kind enough to make all four trials their own entirely self-contained mini-dungeons to be started, puzzled through, and completed as a standalone experience – something that really doesn’t happen as often as it should and spares the player an awful lot of backtracking.

The game’s exceptional graphics help enormously with dungeon navigation too, with decorative touches such as elaborate statues and torches used to break up the twisting cobblestone corridors into bite-sized memorable chunks. Even puddles of water are carefully considered features in Shining in the Darkness, with your party either making a small harmless splash or on random occasions disturbing one of a selection of unique water-based enemies as they pass through them.

Bar a bit of unpleasant but unsurprising grinding here and there I had a lot of fun with the game – proper fun fun too; the sort where I was looking forward to my next session with the game again rather than taking the ‘Well I can appreciate what they were trying to do’ approach I sometimes need to wheel out for older titles I didn’t catch the first time around.

Twenty six years after its initial release Shining in the Darkness can still stand proud as an excellent example of console dungeon crawling done right; it’s a well-designed and beautiful game with enough optional story content and missable equipment to make it worth playing through more than just the once. It’s not an especially cheap purchase in English if you want a cartridge all of your own (although it’s far from the insanity of Vampire Killer, to name just one of many through-the-roof Mega Drive titles) but the good news is Sega have it available digitally on Steam for the grand sum of seventy-nine pence. Not even a pound for a fantastic game that kickstarted a much-loved series? Brilliant!

3 thoughts on “Shining and the Darkness”