This 1992 Japan-exclusive Game Boy game has to win the award for the most unhelpful and unsearchable title ever so if you’re the one person who’s somehow found this blog post in years to come: Hello! I hope your dystopian future is more the cool cyberpunk sort than the “Everyone works for Amazon” kind.

Before worrying too much about the alien-infested future found in the space year XXXX (yes, X – that’s “Ex”, not “Cross” – really is set in XXXX, the one retro-future date that doesn’t make me feel old) we must first bow down to the incredible realtime wireframe 3D the team managed to pull off on the humble original Game Boy: It’s smooth, it’s readable in the heat of battle, and most importantly of all – it works! Enemy forms are varied and well animated, items squish, morph, and rotate before your eyes, tunnels of changeable size curve off into the distance – it really is amazing to see the Game Boy flex muscles nobody even knew it had.

But the real surprise isn’t seeing playable 3D on such a technically incapable format, it’s finding out there’s a decent game tied to all of that impressive programming too. 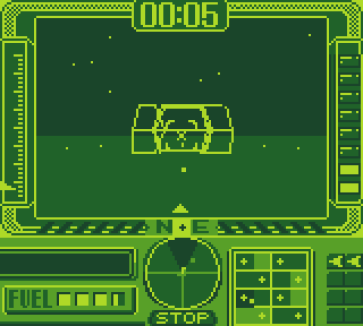 Nintendo however clearly lacked confidence in the traditional Game Boy gamer’s ability and willingness to grapple with a portable game set in a 3D environment, even one released in the same year that gave us Alone in the Dark, Ultima Underworld, and Wolfenstein 3D,  which is why X has an extensive set of tutorial missions covering all of Space Tank VIXIV’s (isn’t that a brilliant name?) fundamental movement/combat abilities and the box includes not only a thorough thirty-nine page manual but a fold-out FAQ/quick reference sheet too.

They really didn’t have to worry though because even with nothing more than a plain old d-pad and two main buttons X is as easy to understand and responsive as any other first-party Nintendo game. Movement along the ground is simply a case of using left/right to turn and up/down to set the speed, ranging from a gentle reverse to a fuel-burning turbo. In the air – yep, you can fly if you hit one of the numerous ramps found in each area at full speed or at any time if you’ve go the jet pack equipped – or in a tunnel things change just a little; your speed is constant and the up/down controls switch to altering your height instead of your speed. The important thing is both control types make immediate sense and there’s a good “feel” to it too: The way your tank bumps around as you travel, the dramatic sense of speed as you turn in the air and the whole world tilts with you as tiny dots rush by below, your tank’s turning circle having a feeling of heft as you bring a strange alien creature into your gun’s sights – it’s little details like these that create a tactile experience through the viewport shown on screen.

Reasonably enough soaring through the air or zooming at turbo-speed across the map uses up fuel; something you’ll need to keep topped up from radar bases or by picking up gas canisters dropped by defeated enemies or destroyed beacons if you want to keep using these abilities. Your space tank isn’t especially thirsty and replenishing fuel isn’t difficult (it’s more that taking a detour to a radar base or finding a beacon wastes precious time and more than likely puts you further away from your objective) but it’s enough to make you pause for thought before unnecessarily burning fuel. 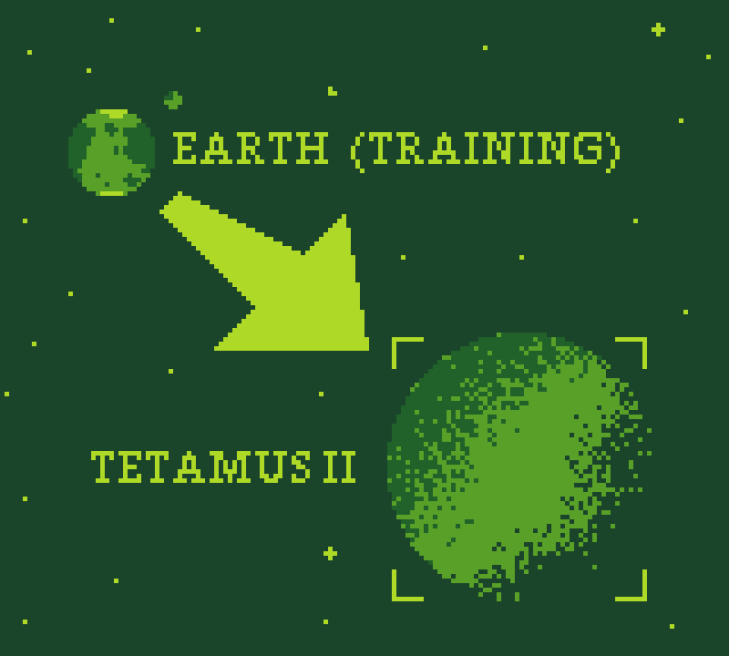 X is an action game at heart, and like all good space-based action games this means a lot of your time is spent zapping aliens with laser beams. Your standard weapon can be used as often as you like and is just the thing for taking out most of the planet’s generic roaming nasties but anything tougher will more than likely require something a little more specialist, available to equip (one thing at a time, although you’re free to change equipment as often as you like during a mission) at any of Tetamus II’s eight radar bases. While there are some missions where you really, really, must use one particular thing on the whole you’re left to pick whichever you feel works best for you.

Your four pieces of extraterrestrial-aggravating equipment are:

LOCK ON: The “does what it says on the tin” piece of equipment. This is the one you’ll pick the most as it allows you to fire missiles (one at a time, from a maximum of eight) at enemies so long as they’re close enough for you to get a target lock. These missiles will damage enemies that are too tough for your standard lasers and will slightly home in on most targets with a few exceptions – the humanoid tanks are probably the most notable example.

HIGH EX: This is the special one, your ultimate attack! This launches an extremely powerful charge that creates a powerful blast radius guaranteed to obliterate absolutely anything nearby – including you. In fact it’s so dangerous it’s not only possible but likely that you’ll die in the explosion, and if you do manage to clear the area you’ll still take heavy damage to your shields. This destructive accessory consumes all eight of your missiles at once to fire just one single shot, so it’s best saved for very special occasions.

JETPAC: Or “Jet pack”, if you prefer. This is the only item that isn’t directly linked to causing more damage but it’s still a useful and versatile thing to have around as it allows you to take to the air any time you like without needing to find a launch ramp first, something of a must-have on later missions that have you chasing after and shooting down airborne targets.

BOMB: This isn’t something you aren’t ever going to need outside of mission five but it makes up for this shortcoming by being integral to an unforgettable experience. This mission has you carrying one of these bombs deep into alien tunnels, dropping them at exactly the right moment (don’t worry, there’s an enormous “DROP NOW, YA DUMMY” arrow to let you know), and then hurtling away to the exit before the thing goes off and collapses the tunnel around you – as a huge fan of Star Fox‘s tunnel segments this was the highlight of the game for me.

Once you’ve been through the basics it’s time to head out from the safety of Earth to the alien plains of Tetamus II and start the game proper. Just as the tutorial was so careful and concerned that portable gamers would take to 3D like oil to water, the main mission briefings also go to great lengths to explain exactly what needs doing and to visually show you your objectives and any noteworthy new enemies you may encounter before you go. It’d be easy to laugh off this cautiousness in an era where people complain if phone games aren’t running in 1080p 3D (and we can now have 3D 3D at home) but the extra detail given in these segments really does help these wireframe objects become everything from hostile aliens to important power crystals after you’ve had them explained to you, not to mention the simple joy of having a good grasp of what the heck you need to do. If you need any extra mid-mission assistance every radar base on the map gives out dynamic and genuinely helpful advice on where to go next, so if you find yourself hunting for that last alien butterfly or reactor rod-carrying superglider you don’t have to tediously scour the map all by yourself as you’ve always got a general idea of where to head and once you’re in the right area a pointer will appear at the bottom of the screen to more directly lead the way.

Even though there’s only one wraparound map (as the fold-out sheet tactfully reminds players, planets are round) with a mere ten missions to play through it never feels simplistic or repetitive because every single mission is very different from the last; constantly introducing new things to do and new enemies to blow up right to the very end. On top of this every ability and piece of equipment you’re given is used in some really imaginative and exciting ways over the course of the game and even if you do find yourself playing the same mission twice (for fun or due to failure) the unpredictability of the enemies you have to chase down means it’s unlikely you’ll have the same experience both times.

Let’s not forget something important either: short is good! It’s just long enough that I wouldn’t recommend sitting down to play through all of X in a single sitting (don’t worry, the cart auto-saves so you can always pick up from the start of the most recent mission), but between the quality and the length I found myself being happy to come back to it when I fancied a go without that feeling of being caught deep in the middle of something, and when it was over I felt satisfied with the final mission as well as a little sad there wasn’t more to play – always the best feeling to finish on in my opinion.

If you do find yourself blown to smithereens or hitting zero on one of the time-critical missions all’s not lost: You can pay for a continue using stars earned from successfully completing previous missions. Every mission costs one more star than the last to continue (so from just one to retry mission two to a whopping nine stars to retry the final stage) and if you don’t have enough stars to pay the current mission’s cost the game puts you back at the highest stage you can afford to continue from. I can’t say this system would suit every game but here it feels like there’s a fair chance to recover from your mistakes while still dangling the threat of punishment (even if it’s never going to be a complete reset) over your head.

X could’ve very easily been nothing more than a demoscene-style programmer’s pet show-off project with a poor excuse for a game slapped on top – and to be fair to the programming side of the development team seeing enemies break apart and reconstitute into something else before your eyes is a stunning effect – but from your very first moment inside VIXIV it’s clear that this is a great game entirely on its own merits; chasing down destructive humanoid tanks as they tear through your bases, defending friendly trucks from leaping alien insects, and full-on aerial combat with warnings of nearby alien missile launchers appearing on-screen is all very exciting, and the whole package just comes together as one brilliantly balanced whole. If you want something that shows off your Game Boy without skipping on the fun then this is definitely it.

If you find yourself a bit stuck while playing there’s a helpful walkthrough here (Japanese): https://www.dopr.net/retrogame/Ｘ（エックス）ｰトップページ

And if you’d like to spend some time with the localised DSiWare sequel you can still find the game known as X-Returns (Jp), X-Scape (US) and 3D Space Tank (EU) for sale on their respective 3DS e-shops.