The last time I was vaguely aware of wrestling Saturday morning cartoons were a thing, “We Didn’t Start The Fire” would’ve been on the radio, and… well, let’s just say my knowledge of the perennially popular entertainment-sport is a little bit out of date, that’s probably the most polite way to put it. B-but I’ve got back into it recently! I mean I pick Pikachu Libre when I play Pokken and everything!

…That’s not fooling anyone, is it?

Fine, I’ll admit it: I sound like I’m about the last person on the planet you’d ask to talk about Fire Pro Wrestling S: 6Men Scramble, Fire Pro in general, or indeed anything even vaguely to do with wrestling… but here’s the weird thing – in spite of my embarrassing levels of ignorance, I love it. I love Fire Pro Wrestling.

Clearly this enjoyment doesn’t come from the sea of familiar-but-not-quite-familiar-enough-to-sue wrestlers to choose from, the wealth of different styles and the huge quantity of techniques they can use, or the rabbit hole that is the create-a-wrestler mode that lets you fuss over everything from specific grapples to their armband/face paint/belt/shoe colour (if you decide to have any of those accessories in the first place). What makes Fire Pro so good is that it gets that unhelpfully non-specific “feel” just right; that way everything always makes perfect sense first time and it all effortlessly flows together like the best game of Tetris you’ve ever played in your life or that time you meant to have a “quick” go on Tempest 2000 and then came to your senses an hour later, all bleary-eyed and with a high score you didn’t think was possible.

A lot of that feel is down to the excellent visual feedback the game throws your way:  Wrestler’s are tossed out of the ring, lean on the ropes, and bounce off the mat with a tangible weight and when they clash – even though they’re 2D sprites built from segmented parts like so many brilliant 16-bit bosses of old – the contact always looks clear and believable even when legs are locked around other legs or someone’s being pulled up by their lustrous wrestling hair. I can’t tell you whether these moves are strictly authentic or not, but the push and pull that occurs as two people try to out-grapple each other always has a genuine tactile quality to it and always feels believable. 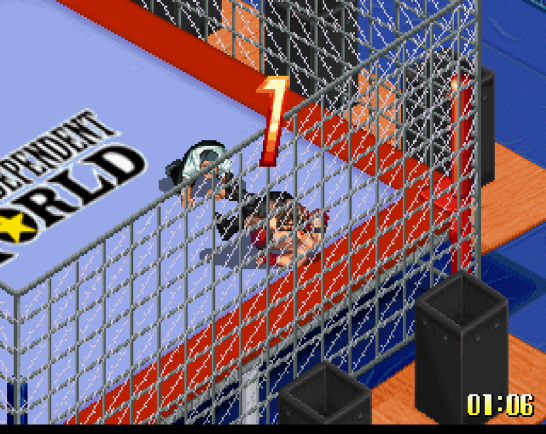 This sense of being believable is especially important in a game with absolutely none of the usual bars, gauges, or other useful markers you’d expect from a competitive title. It’d be very easy to feel lost at sea when there’s no health bar or power gauge to tell you how you’re doing but once again the visual feedback you get from the excellent animation does all of the hard work for you; so when your wrestler starts panting after falling prey to a few heavy throws or because they’ve been running around the ring like their well toned butt cheeks are on fire it comes across, even to someone with basically no understanding of the sport, like a completely reasonable reaction. These visual clues take on a variety of helpful forms as the match wears on (even going as far as blood splatter in extreme cases!), so when your wrestler takes longer to get up off the floor than they used to, doesn’t counter the reverse grab they dodged so quickly last time, and generally gets a bit sluggish it doesn’t feel unresponsive or unfair but a natural continuation of the fight, their abilities doing nothing more than reflecting their visual state.

This is also why when you’re on the attack opening with your most special of special moves and trying to finish things quickly just won’t work, you have to soften up your opponent first with some quick and simple attacks first before moving on to the more complex pins and dives. Of course a fresh opponent will have no trouble moving out of the way as you try to impress the crowd with a flamboyant somersault, and as a player knowing when to bring out a devastating attack is far more important than knowing how to pull it off.

Not that executing moves will ever give you any problems; the range of wrestling styles and the moves within may feel almost bottomless, but as their execution follows a universal Smash-like system (Sorry, I know Smash Bros. didn’t come first) of weak/mid/strong attack options that are further modified by a combination of up/down/left/right on the d-pad. But don’t mistake “simple to use” for plain “simple” as the game’s brimming with positional and situational moves even in the most vanilla of one-on-one matches and things only become more complicated when you throw in co-op holds, running attack counters, cages, tags, corners, and the titular six man scramble… but the important thing is you can pick absolutely anyone in the game’s extensive roster and at the absolute least have a single solid foundation to start with.

Because Fire Pro’s always so clear and confident with the player’s grasp of the basics the game feels consistent and fair even when it decides to break the rules: The dirty moves the referee doesn’t see because they’re preoccupied with another tussle, the way your tag partner will duck into the ring and kick off your opponent if you’ve been pinned, the showboating on the top turnbuckle before a rival elbow-drops into your beautiful prone face – it’s all there and it does a fabulous job of communicating the entertainment side of the sport without any detriment to the timing and technicality of the aspects of the game.

6Men Scramble’s a big ol’ wrestling sandbox designed around keeping players playing through the joy and satisfaction of a good personalised match rather than endless unlocks hidden behind difficult or tedious busywork. Sure, some characters do need you to win the main “Victory Road” mode before they become available but that’s a very tiny minority of the wrestlers on offer – right from the first load there’s well over a hundred to choose from of all shapes and sizes and every mode is available to play. So if you want a tag team match in a particular arena, a straightforward one-on-one bout, or a fully customised tournament right down to using a specific referee then it’s all there for you, no problem.

I’ll be honest here; I can’t tell you what 6Men Scramble offers over other Fire Pro games or if it’s lacking some popular feature the current go-to version of the game has, but I can tell you that it helps me, a complete idiot, understand what all the fuss is about – and I can’t think of any greater praise than that. Thanks to Fire Pro, I can see why people like wrestling – I can play a match in this and appreciate the thought and technicality that goes into a perfectly executed hold – and yet for all the reverence Human clearly have for the sport they’re emulating there’s no question that, even as “just” a game, this is still a heck of a lot of fun. I can’t say that Six Men Scramble is so good that you should track down an import copy of this over something like Fire Pro Wrestling World but this Saturn title’s widely available and very much on the cheaper end of the import game price scale, so if you’re in the mood for adding another Sega game to your shelves (that’s everyone’s base mood, right?) and you’d like to play Fire Pro then this is the eBay search for you.