This little old thing is the first of three HuCard-based strategy games by NCS for the PC Engine, but confusingly the second in its own fantasy trilogy that began with Elthlead (PC-88) and charts the struggles of the good King Sieghart against the dark forces of Böser. If any of those names sound familiar then you must be a Langrisser fan – nice! These games are the foundation that Masaya’s popular SRPG series was built on. Don’t worry too much about the details or feel that you’ve missed out on the plot by jumping in with Gaia no Monshou though, as the story in this entry is often little more than a bit of post-battle “We have won the battle, but the forces of darkness remain” flavour text.

Compared to the initial 1987 home computer versions for the PC-88, MSX, and Sharp X-1 of Gaia no Monshou this PC Engine port, released a year later, looks a little less sharp but generally survived the move to console intact. The only major difference as far as I can tell from looking at the game’s Project EGG store page and a quick poke around the net are that the battle maps remove three columns worth of tiles on either edge – reducing troop numbers on both sides to match the smaller sized battlegrounds as well – to compensate for the differences in screen resolution.

The game’s pretty light on the “RPG” side of things but very keen on the “S” part of the genre label and as such if you’re not fighting then you’ll be busy preparing for one. Every single skirmish takes place on a 14×11 grid of offset squares, giving movement and attack reach a feeling of hex grid combat, just without the hexes. While Langrisser would eventually go on to host complex multi-scenario sword-based epics the setting here is a more straightforward and linear good-vs-evil affair, however the fantasy setting it’s all wrapped up in ditches a lot of the typical clichés in favour of dolphin-riding Aqua Knights on your side to fend off exciting-sounding enemy Gunner Wolves and Bone Dinos. As these forces are all represented by small and rather simple sprites with no flamboyant cut-in battle animations or even artwork in the manual (please remember this game – even this later PC Engine port – is so old it predates the original Famicom Fire Emblem by several years) it is admittedly quite hard to get really fired up when your Turtle Knight blocks a King Lobster, but it still adds a little zest that would otherwise be absent and I’d love to see more imaginative combatants like these make a comeback. 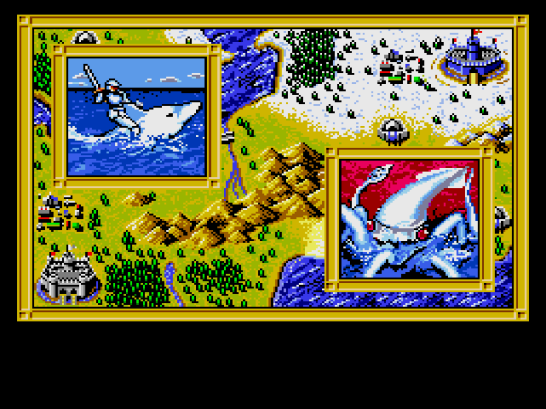 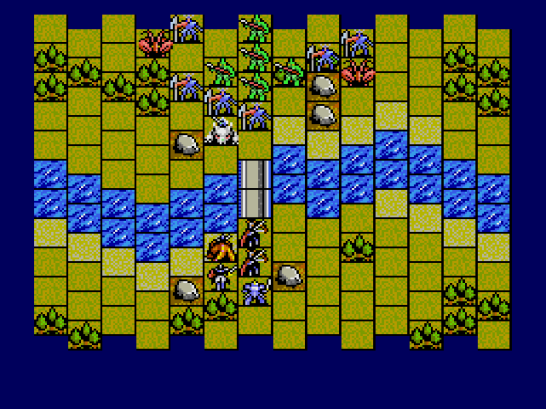 There are thee main modes of play in Gaia no Monshou – Scenario, Construction, and Campaign – and they all play a little differently from one another so we’ll start with the basics that apply to all of them and then look at the specifics afterwards, OK?

Battles are phase-based: At the start of every turn the game randomly decides whether the light or dark forces get the initiative, and whoever does gets to use their entire side first before the game switches to the other. I can’t say I’ve done any formal testing on the invisible rolls the PC Engine performs here but it always seemed to be weighted in my favour, making dark-side initiative more of an unexpected spanner in the works than a constant problem. In any case some units on both sides – fighters and armour knights are the most readily-accessible for your team – have the ability to counter-attack if they’re within fighting range (there are some handy tables at the back of the manual with this sort of information in them) so you don’t have to worry about powerful warriors standing still and politely taking a beating due to an unlucky roll of the virtual dice.

The positioning of your units is very important as certain types of terrain can block your line of sight, preventing an attack you could otherwise make, and likewise opposing forces can physically block the other side from passing by even if they technically have the movement range to do so. This helps add a little strategy to the otherwise flat skirmishes, allowing you to physically keep enemy thugs away from your delicate archers simply by plonking a sturdier ally in their way or hemming in troops with careful management of your team and giving you control of the flow of battle.

As all battles take place on a single-screen of uniform size there are practical limitations as to just how much of a difference one is from another but you always get the feeling that they’ve done the best with the materials at hand, and a quick go at any mode will reveal a range of ruins, lakes, rivers, castles, and mountains to tussle over. The small space actually makes it feel pretty nippy and dangerous as there’s nowhere to run and no long setup periods where you spend five turns tediously moving every single unit just to get everyone within long-range distance of the enemy. The lack of space also means long-range fighters have to be a little more careful than usual and slow-moving units can realistically take the lead without holding everyone up.

Magic is present in Gaia no Monshou, although you need to leave any notions of casters throwing fireballs and priest carefully healing their friends at the door. Here a single spell is chosen from a small semi-random selection before the start of the conflict and this magic then has a percentage chance of activating with no input from you whatsoever. As these effects cover everything from attack boosts to ignoring terrain changes and even destroying random enemy units I find it’s most helpful to think of them as force-wide tactics than traditional sparkly-mage magic, but maybe that’s just me.

There are a couple of significant quality-of-life options too if you find yourself short of time: Pressing the Select button in battle brings up a menu that allows you to skip the already basic walking and attacking animations (it does still show static icons moving from one tile to another, so you don’t have to waste the time you saved working out where everyone is), as well as the opportunity to have the AI control any unused members of your party. You have to deliberately turn this on for every single turn if you want to use it, preventing you from walking away and mindlessly winning (or losing) on autopilot. The AI itself isn’t brilliant but on the other hand it’s no worse than the CPU side of things so if you’re not sure what to do or if you just fancy a turn off it won’t deliberately hobble your battle plans.

With that out of the way let’s take a look at what unique twist each mode brings to the table:

Scenario mode offers thirty maps to choose from – all of which are available immediately – in a more immediate take on the typical SRPG campaign. The first twenty-five of these are also used in the campaign mode with changes to the enemy troop deployments and the final five are an odd mix of Japanese tanks vs dark dragons and fights with ninjas – why wouldn’t you? Each map here is a complete and self-contained experience with its own little story chunk given out beforehand, and all of your units are pre-picked for you.

Construction allows you to choose from any of the scenario mode’s pre-made maps and then set up a battle using as few or as many (up to twenty) units on each side – one Light Lord against a horde of enemies? Dragon against dragon? It’s entirely up to you. You can even play against a friend if you’ve got two PC Engine controllers to hand.

Oddly enough the campaign mode’s traditional story-like structure is listed last on the in-game menu select, although that’s probably for the best as it’s definitely the weakest of the three. Here you are made to progress through twenty-five maps in a linear order – that’s fine. The problems arise here when you come to the points system: You hire troops using points, and the points available to you are based entirely on your success in the previous mission. Let a friendly unit die? Points deducted. Did an enemy retreat? Points deducted. Take too many turns? You get the idea.

To make matters worse there’s no base amount of points given out per map or even a default set of mediocre free troops to use so there’s absolutely no safety net at all – if you end a map with only enough points to summon a single archer on the next one then tough, that’s all you get.

Because of this it’s very, very, easy to find yourself at the beginning scraping a victory and having insufficient points to mount a meaningful offensive next mission – you win, but you lose too. The only option you have here is to re-enter a password (Yep, password saves! Although they’re not too bad here) from a more successful earlier finish and work your way back up through the campaign, hoping you do better next time. This really dampens the mood because whenever you lose a battle there’s always that little thought lurking in your mind that maybe your strategy was absolutely fine, you were just never given the opportunity to use the right units in the first place – the thought of spending an entire game with that worry bouncing around your head is an unpleasant one.

Sometimes games rise above their age or inexperience and give you something spectacular years ahead of anyone else, but not this one – Gaia no Monshou is one of those games that simply feels as old as it looks. But even that doesn’t prevent it from being a fascinating experience in a different way as you get to see an entire genre emerge from the primordial mud right before your eyes. It’s very rare to get to play first-hand something with such a clear lineage that runs right through to the current generation of gaming, but thanks to the Switch and Playstation 4 remake of Langrisser I&II that’s exactly was this game can offer. It’s also short, simple, and thanks to the game’s scenario mode it’s also a great “coffee break” SRPG, for those times when you just want something to occupy a free afternoon with no strings attached.

If anyone wants to make a serious go of it the information here is very helpful (Japanese): http://www2u.biglobe.ne.jp/~yamachin/eofgaia/eofgaia0.htm

3 thoughts on “Gaia no Monshou”