(I apologise if that song is now stuck in your head for the rest of the day, but I typed up that title as a quick filler and it’s sort of stuck)

Great, aren’t they? All the shouting and the big portraits on the character select screen and the posing about after a win. I’ve always loved them, from the  serious action of IK+ to my slack-jawed awe at Samurai Spirits‘ beautiful attract sequence in a poorly-maintained arcade cabinet to jamming all sorts of imported ROM and RAM carts into the back of my Saturn because even if the world didn’t think much of that console a few people at Capcom did and were determined to show you what it could do in the right hands. Heck, I love the genre so much I was the best person in my whole house at Street Fighter II: Special Championship Edition back in 1993; the fact that I made up 50% of everybody in the building who played the game is only slightly relevant and not something we’re going to spend too much time thinking about.

But it’s also true that I’ve felt pushed away by the genre for along time too: It’s all about channelling you towards direct win-or-lose (or just lose, in my case) online competition against a tireless and endless army of vastly superior players – perfectly reasonable, really – except I am just not good enough to compete. But more significantly than that, I’ve also long passed the point of even wanting to try.

This means online play – and therefore, the raison d’etre of modern fighters – is a closed book to me unless I am invited to personal sessions with friends who are happy to tolerate a lot of “Hang on, how does this work again?” as well as my almost farcical attempts at joining a session/room, all for the sake of a few matches featuring the most casual of beat ’em up bopping with characters I tend to pick at the spur of the moment just because I happen to like the look of them.

I should stress here that I am not laying the blame, if there even is any at all to dish out in the first place, at the genre’s door – it’s great to see fighting games doing well! In this day and age we’ve got a great selection of the old and new across any modern system you can think of, those dark days of having to import not just a game but a whole console (and premium-priced yet largely average arcade sticks to go with it) for the sake of a single genre little more than a hazy memory for most people. Things don’t have to be for or liked by me for them to be good, and virtual fisticuffs are no exception to that truth.

But that hasn’t stopped me from wanting to regain that… “ignorance”, if that’s the word, that I used to have for these games. That contentment found in not even being aware that your favourite fighter’s a bad choice, or that cool combo you did by accident one time is supposed to be a reliable core part of your basic toolset, or what any of these terms mean.

“Don’t play online then!” “Don’t check guides!”: These are obvious, and reasonable, responses to my self-inflicted dilemma. But it wasn’t enough to simply avoid these things; even if I’m not actually any good I still have some desire to understand what’s going on and how to play “properly” – that approach just didn’t work for me. What I wanted to grasp was that feeling of playing just for a bit of knockabout fun rather than failing to shake that feeling that every offline match is nothing more than some poor-quality “training” just so I can have the dubious honour of lasting ten seconds instead of five online, but I couldn’t work out how to do it…

It turns out the answer was “My son”.

He’s just finished his Easter school break: a time where the weather can switch from blissful sunshine to literal storms-with-official-names faster than a cat can decide it doesn’t want the food it’s just spent half an hour begging you for, everything costs more than it usually does, please no I don’t want to play Exploding Kittens one more time, and you suddenly feel that cleaning out the shed – no, no, I’m happy to do it by myself, you stay right there – is a great way to get a little peace and quiet.

How do you find some fresh family time in those long two weeks? What do you offer a kid with a vague fondness for Marvel characters (thanks, Squirrel Girl comics!) who’s played Super Smash Bros. to death? 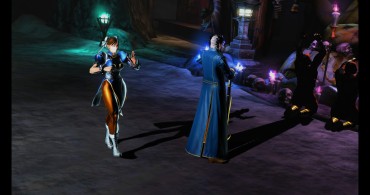 You ask if they want to play Ultimate Marvel vs Capcom 3, of course! It doesn’t take much effort in that game to do something that looks impressive and the cast’s cartoon goofiness is endlessly endearing even if you don’t understand any of the numerous references the game constantly throws your way. It also has the added benefit of letting him play with normally off-limits characters from “Mum’s scary games” and “The game with Mum’s boyfriends in it“, as well as interdimensional tentacle monsters and a sassy space raccoon. When you’re eleven years old the only legitimate complaint you can have against a roster like that is it lacks dinosaurs, really.

He also cares nothing for tiers or reversals or tech hits or anything else that’s supposed to matter; he’s just there for the daft taunts, the cool stuff going on in the backgrounds, and picking decent outfits for his team – he’s sitting there next to me because he’s having fun in the moment, to the point where beating me up is almost a secondary concern.

The knock-on effect of his attitude is that if I’m not also there just for the fun of it, if I’m trying too hard and thinking too much and worrying about how my “performance” (meagre as it is) measures against how I “should” be playing then there’s no point in me being his player two.

Which would also make me a terrible parent. The sort of parent who is more concerned about a structurally sound Mouse Trap than making sure everyone’s having a good time. The parent who doesn’t allow a kid to use FARTS (eight points) or ZORDON (sixteen) in a game of Scrabble because this is a serious game that one must take seriously, child.

So thanks to him I’ve had a week of not just enjoying but outright relaxing with a fighting game of all things, something I’ve not really been able to do since my brother and I would play the likes of Killer Instinct or Marvel Super Heroes together all weekend long when we were younger. What’s even better is that I’ve actually improved! Funnily enough playing against a spammy little sod with no concept of shame means I have to actually learn how to use the characters I’ve picked because if he finds a move I struggle to find an answer for he’s going to use that damned thing over and over and over until I’m pinned in the corner and turned to mush. Again. I’m sure this is how any “real” fighting play works, but it’s a much nicer experience when it’s against someone who’s howling with laughter and excitedly getting up off the sofa after a round to act out the on-screen action. “Yes, very impressive!” I say in encouraging tones as I mull over the last round in my mind. I did hold back that time, didn’t I? I’m sure I eased off at the end so he could win, just like always… That’s the lie I’m trying to tell myself, and it’s not working. “I did my best and my son still won” is one of those silent moments nothing can prepare you for as you gaze into the infinite abyss, forced to confront your own mortality and mediocrity head-on.

Which is a rather roundabout way of saying I’ve got my fighting game groove back, even though I’ve not mastered anything and I’m spending most mornings getting Ghost Rider’d to death by a young boy.

It’s not about not wishing or caring to understand – I’ll always want to be better than I am. At everything. If I ever master the art of microwaving popcorn without burning it then I’ll let everyone on Twitter know, I’m sure. Yes, it’s annoying. And by “it” I mean “me”. But now I can finally treat proper arcade fighters like the old “Spare pocket change and done” or “Let’s have half an hour while we’re free” experiences I used to, with a smile on my face and blisters on my poor thumbs.

My son taught me something about video games last week. I can’t wait for my next lesson.

One thought on “I’m gonna take you for a ride!”