I first heard about this (under its international name, Mercenary Force) when I was just a wee little Kimi-mite in one of those old review/cheat compilation books you used to get – you know the sort, surely – it would have been printed on a hundred pages of paper so cheap you’d have been disappointed with the quality if you’d bought it as budget toilet paper, had half a dozen blurry photo-screenshots spread out across the entire book, and a huge “100% UNAUTHORIZED!” notice on the front, possibly with a few unnecessary extra exclamation marks on the end to try and make the whole thing feel more exciting than it really was. To be fair to whoever’s responsible: It clearly worked on me. I couldn’t tell you what information that little book contained on that game or any other if my life depended on it but it was enough to get it caught in my head as a bit of mind-fluff; one of those games, like the Lynx version of Rygar that I have never ever bought but have always wanted to, that I knew I had to find and play – one day. But time passed and I eventually forgot all about the game until this year’s little burst of “Gotta Game Boy!” hit and I went trawling through the dark and musty corners of my mind for those old games that had once caught my eye. The timing was perfect: I had my Game Boy (the same Game Boy as I had back then! Bless that indestructible brick), I had the name of the game, and I had money! Do you know how often I remember the name of a particular game I’m after and have the money on hand to buy it? It’s… it’s not very often, let’s leave it at that.

Now going after a lost childhood memory is a terrible idea: The memories always far sweeter than reality could ever be, especially when they’re based half-formed ideas that have sprung from second hand information and sharpened by a kid’s imagination running riot. But my nerd-senses were tingling when it came to Tenjin Kaisen and, like that first time I laid my eyes on Hard Edge and felt in my very soul that it was unquestionably My Kind Of Thing, I just knew I had to go with my gut and track a copy down.

And you know what? It’s a really nice shmup! It’s a bit like a horizontal Guwange or Kiki Kaikai. A bit. If either of those two had a flexible multi-class party system with leader and formation changing on the fly. And were made for the humble old Game Boy. All the way back in 1990. Which they weren’t. 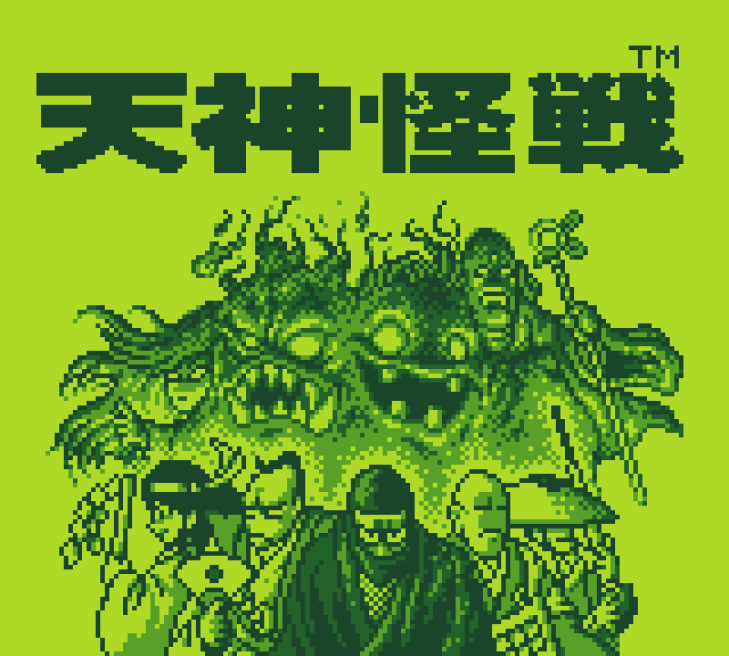 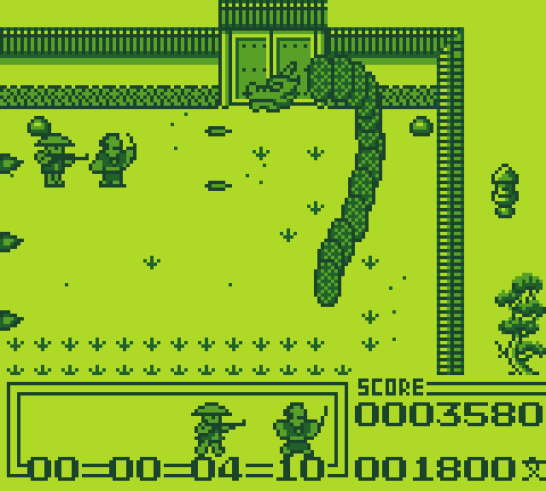 Anyway! The mercenary force bit of Mercenary Force is something I love about this little game and definitely title-worthy: These generic little hire-able units (although not that generic – ninjas love bananas while shrine maidens prefer French cuisine, apparently) freely combining into your very own shmup-army in any arrangement you like – so long as you can afford to pay for them out of your limited funds, that is. In a lesser game this would mean the cheapest troops were rubbish and the most expensive ones were always what you really wanted to have but here every class is so useful and distinct from each other you could make a strong case for just about any team you can imagine. The differences between their shot types and the four battle formations you can use are blissfully immediate and obvious, perfectly combining that practical need for on-the-go simplicity with just the right sort of depth that makes practise and awareness of each character’s strengths and weaknesses worthwhile.

But I don’t really want to talk too much about that side of things today, so if you suffering through this meandering pile of text because you wondering if the game is any good I’ll save you from any further misery – yes, it’s very good. Go buy it. Yes, right now.

Right! With that out of the way we can talk about the real best bit of the game – the incredible graphics Meldac managed to squeeze out of Nintendo’s underpowered box of tricks. From the moment you gaze the incredible artwork they for some reason make you hang around on the title screen to see you know you’re in for a real visual feast with this one and things only get better as you’re instantly cast into a very special character select screen taken up almost entirely by beautiful character designs that not only look incredible but react to your presence as you move the cursor over them, like a really fancy arcade character select screen.

As you’d expect the sprites while playing are no where near as large or detailed as the ones that came before, but for the time and the hardware (not to mention the genre – you’d normally want to keep things small and simple with an action-packed shmup!) they’re impressively clear and distinct even if they do only stand sixteen pixels high. Whatever’s happening on screen your motely crew are always easily discernible amongst the action, no matter how many giant centipede monsters or enormous dashing tigers dare to attack you. 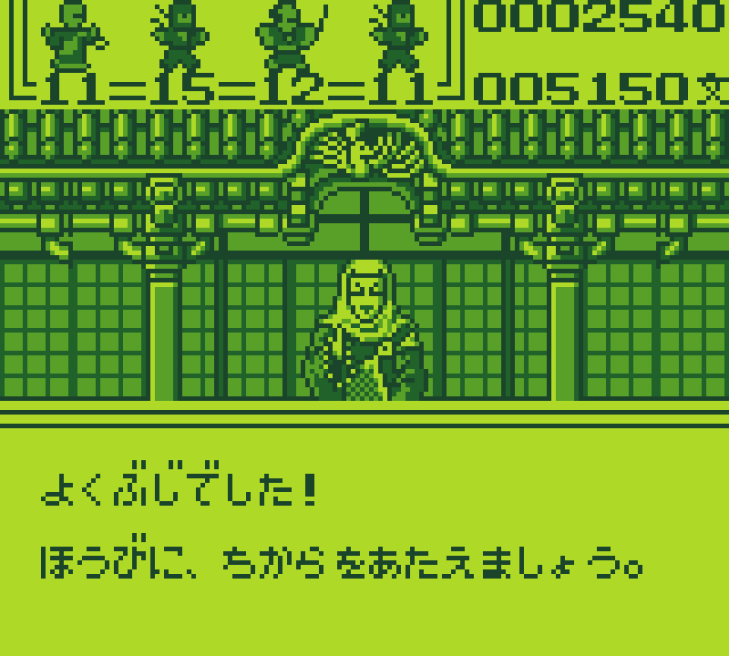 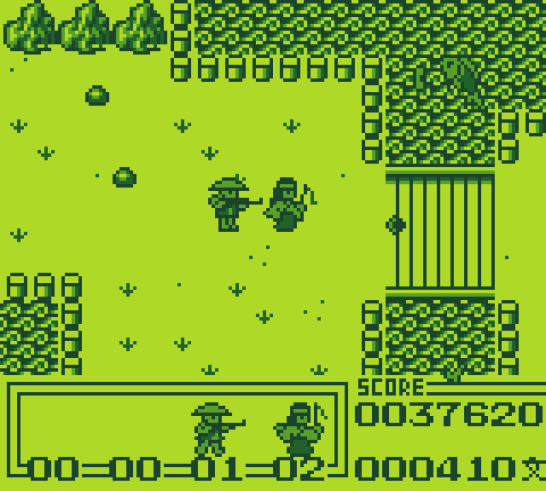 Oh yes, the enemies! The first round does its best to ease you in gently, assaulting you with waves of ninjas, monks, and samurai with just the odd tiger thrown for good measure. The incredible dragon at the end and its mesmerising swoop around the screen is a suitable step up from the common riff-raff but it’s just the tiniest taste of what’s to come; before long the game plunges into full-on yokai territory, throwing classic umbrella, lantern, and numerous other spirits your way as well as the slightly less unusual fish, skeletons, and um, giant screaming ghost heads. There’s probably a proper name and nightmare-inducing morsel of folklore behind those too, but some things are best left unresearched. If these beautiful snippets of animated pixel art were just for show that would be impressive all by itself – the Game Boy isn’t famous for its ability to sling lots of animated sprites around the screen at speed – but what makes it truly exceptional is when you realise the variety and designs of these enemies feed into their attack patterns just as much as they do their artwork. It would have been a lot easier to just have everything wibble across the autoscrolling playfield in a selection of sine wave patterns but here the personality of every enemy’s behaviour really tries its hardest to shine through: Frogs hop on screen before letting off shots that fire in a leap-like arc, flying squirrels dash in from above before rushing straight towards you, bone-throwing skeletons that rise out of the ground before attacking like a Golden Axe tribute act, and best of all an enormous ghost samurai summons two damaging illusory outlines for you to avoid – and this enemy is used once! There may be a bit of flicker when things get busy but it always feels reasonable when you see just how much is going on all at once – it’s fair to say that in an ideal world there’d be no flickering at all but at least it only happens when things are really heating up, making it feel more like the natural slowdown found in an arcade shmup than something that could or should have been ironed out at some point during development. 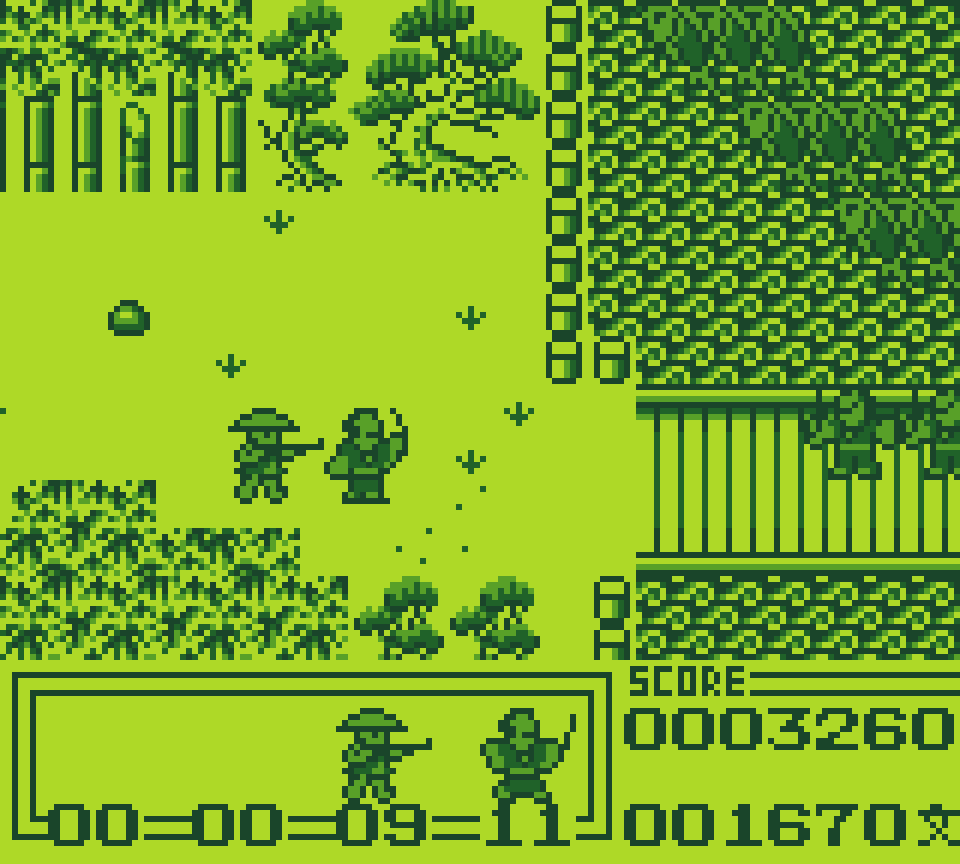 And all of this before we even get to the various shopkeepers, priests, unique special attack graphics… or the scenery, which had me smitten the moment I saw the bridge section in the very first round scroll into view (shown above). It’s not much, not really – there’s a short bridge over a bit of river – lots of games do that. But the texture they use for the water here, an amazing interlocking pattern of ukiyo-e style curls, is just wonderful. It’s one of those techniques that isn’t going to knock your socks off the way Treasure ripping up the Mega Drive’s programming rulebook to make Alien Soldier does but it’s just a really crisp and spot-on little bit of artistry, perfectly intertwining the setting with the technical limitations of the Game Boy’s four-shade screen. Within the context of the hardware and the year of release there’s absolutely nothing you could do to improve this game’s water effect, it’s just that good.

If tiles of pixellated water fail to float your metaphorical boat then the game’s still jam-packed with plenty of other visual delights that are sure to distract you from the approaching hordes of darkness and make you wonder just how on earth they crammed all of this into a little old GB cart; this game’s got bamboo thickets, detailed shrine bells, abandoned carts, and even giant Buddhist statues that scroll by like it’s nothing special at all to earmark all of that data for something that’s used once in one place across six whole stages worth of game – a very modest sort of excess that heightens the whole experience without taking you away from the action.

Whether you know this as Tenjin Kaisen or as Mercenary Force (oddly enough this is one game that wasn’t Decap Attack’d when it came westward) it’s one of those games that still feels as fresh as the day it was made, challenging what you’d expect the system while still fitting the Game Boy like a glove. It’s taken… oh I wish I hadn’t worked this out – twenty-nine years for me to play Tenjin Kaisen, but I can honestly say it’s lived up to my own hype and I’m as happy with it as my childhood self would have been. Phew!