Scary games? Pfft. Drop me in a room filled with virtual zombies, giant crabs, or aberrations that have clawed their way up from the depths of Hell itself and I’ll have that place cleared out faster than you can say “Actually I prefer the psychological horror found in the likes of Silent Hill 2” – and then I’ll go back and do it armed with nothing more than a feather duster in record time just for good measure. If you’ve got room for nightmares and unsettling thoughts to enter your head when playing a game like that then you’ve clearly not been busy filling your noggin with delicious speedrun strats and super-important information like “I need to keep three Magnum rounds back for the last boss” in my opinion.

You know what’s really scary? Navigating absolutely everything to do with high school. The mysterious and fickle world of fashion, especially as it relates to attracting another person. Making pleasant small talk with strangers I would like to impress. Tokimeki Memorial Girl’s Side Premium 3rd Story is all three of those terrifying things wrapped up in a pretty package of delicate pink flowers and gently smiling boys. 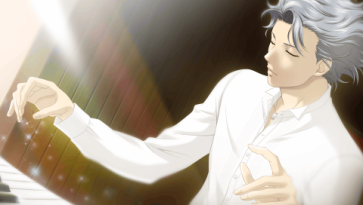 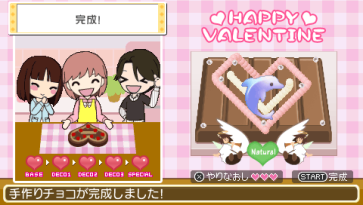 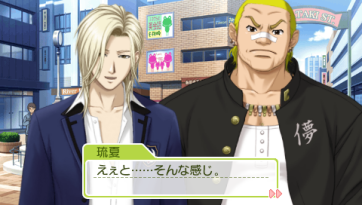 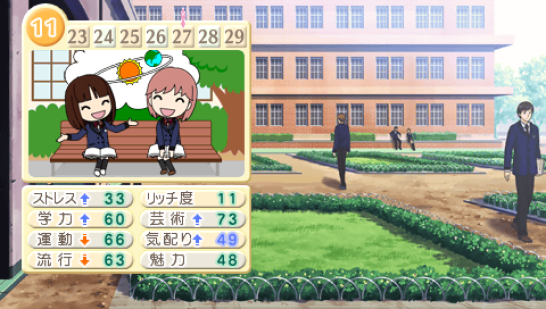 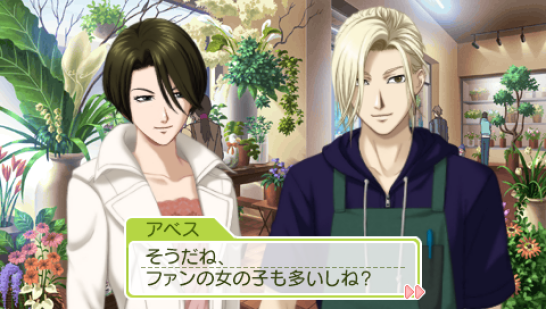 It will come as no surprise to learn that the sort of woman who fills her blog with space diaries and love letters to Alisia Dragoon wasn’t an incredibly confident social butterfly who always had the perfect outfit to hand during those TokiMemo teenage years – or indeed any other year I’ve been alive either. As such I’ve always assumed I’m a walking disaster at virtual dating because all of the seasonal frilly skirts, girly chatter, and awkward phone calls found within these scenarios are completely alien to me, something real girls do when they’re busy doing… whatever it is real girls do, which I guess is all the stuff that would help you know what to do if you were trying to get a digital date.

If this was going to be a regular blog post this would be the part where I’d break out a little TokiMemo-flavoured history then dive in to Girl’s Side 3rd Story’s various additions and tweaks to the established formula before ploughing ahead with some of the details of my rather sorry attempt to woo the guy with really nice hair (Ruka, the blonde one found in most of the screenshots on this page) – the usual sort of rhythm I tend to fall in to when I write about games people may not be familiar with. But not today. 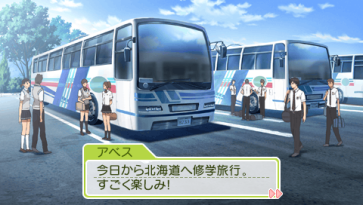 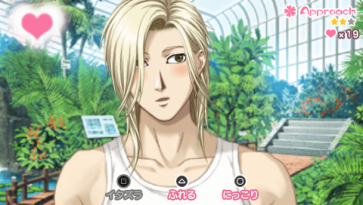 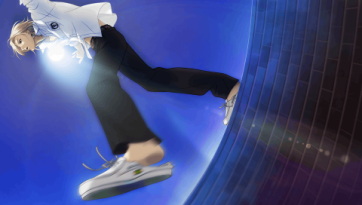 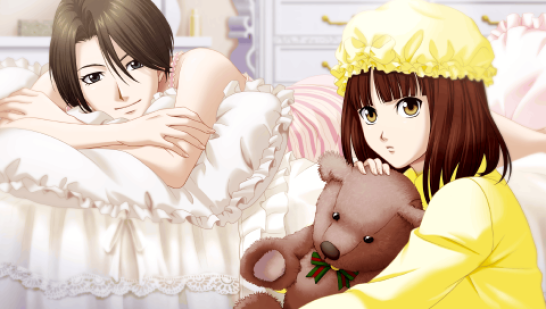 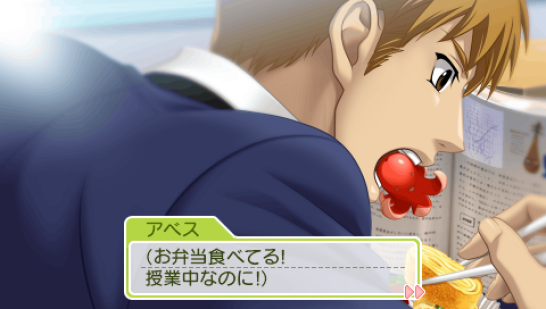 I was, as I usually am, incredibly nervous when I started Girl’s Side 3rd Story. I’ve always put this down to a fear of rejection – everyone’s afraid of rejection, aren’t they? Of putting their heart on the line and watching it get kicked into the nearest bin? That sounds like a reasonable thing to not want to happen when you ask someone out for a date, even if you don’t know what’s supposed to happen when you ask someone out for a date. It turns out I was wrong. As I was playing Girl’s Side 3 I realised this was more than just a bit of worry that the pretend person might not like the pretend me and I’d have wasted precious gaming time on a bad ending: This was genuine anxiety – a real adrenaline-fuelled fight or flight flutter that’s clearly nothing to do with the atrocious decorations I applied to Ruka’s Valentine’s Day chocolate gift (The first attempt was a heart drawn very badly in strawberry icing with edible “pearls” haphazardly dotted around and a decorative dolphin on top – he seemed to like it, but it never would’ve won Bake Off) or my ridiculous attempts to gaze lovingly at him in a public place. Heaven knows how long it’s been since I played whatever my first dating game was but I know that it wasn’t until yesterday that I understood what the source of my problem is: it’s not the potential for failure that’s been bothering me – I’ve already failed at far more games than I’ll ever remember – what I was afraid of was the reaction of these virtual dates. You see no matter what’s actually happening on-screen my mind is always screaming at me, warning me that bad things will happen to me if they aren’t happy.

The “problem” is Ruka and the rest of the game’s cast, including your tirelessly supportive girl friends, are all very nice people, even the ones that insist otherwise and the ones that you assume would never be interested in you in the first place. Of course they are – that’s the whole point of the game, literally their raison d’etre. All you have to do is grind out the right stats and trigger the right event flags and then boom, they’re your perfect forever love. Going on dates that eventually blossom into a relationship is supposed to be a pleasant experience, a reward, a positive. Except… I’m not used to that. 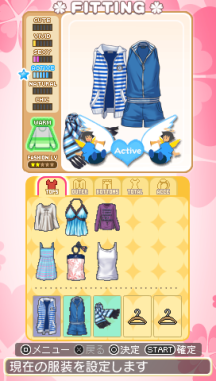 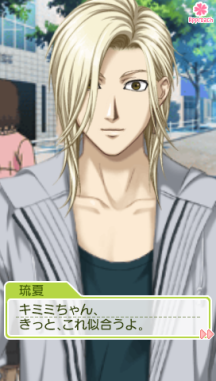 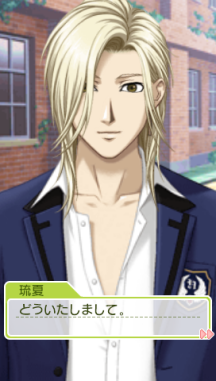 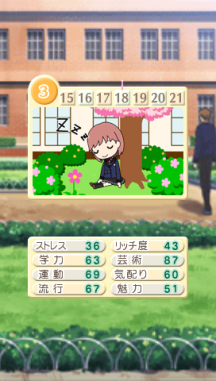 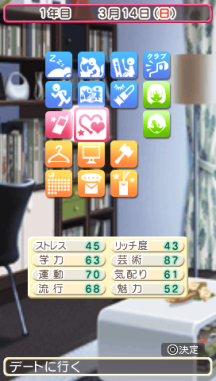 So what has been happening in these games is a guy or girl would approach me, or I would be pushed by the game into approaching them (you can’t really blame a dating game for trying to get you a date), and the intended reaction is plainly supposed to be some level of romantic interest, some sort of cute spark for me to take further if I choose to. Only when my mind tries to draw upon past experiences with other people who were in a caring/loving position in my life to use a template for these interactions all I get back is an alarm response – other people are dangerous, remember? It’s dulled by the fact that I’m aware that I’m playing a videogame on a small screen and none of the people I’m interacting with could ever pass as a living, breathing, human being but I still can’t help it. I’m always waiting for that “but” – waiting for them to casually remind me they always – always – carry a knife. That they can throw me out of my home at any time. That they’re sorry they said they killed my pet, but I shouldn’t have made them angry. That they’re not drunk again, they just need to unwind.

But I can see nobody in these games ever does anything like that. No, it’s more than that – none of them ever will.

It takes all of one functioning braincell to realise that they won’t because they can’t – these awful scenarios simply aren’t possible in Girl’s Side 3’s world, or in any other mainstream dating sim I’ve ever come across (hopefully any dating sim full stop). These games are all about copious amounts of blushing, shyly asking someone if they’ll go to the concert with you, and laughing with a potential date at a mildly embarrassing incident that probably involves ice cream. So if I call Ruka by a nickname he really doesn’t like, or get him the wrong sort of present at Christmas, or take him on a boring date at a bad time of year he’s never going to do anything more than give me an annoyed sigh and maybe not be so keen on agreeing to go out with me next time. In fact I could deliberately sabotage every last date I go on in Girl’s Side 3 – maliciously leading multiple guys on, being as rude as possible, and standing them up in front of everyone after promising to go out with them a week ago and the very worst that could possibly happen is whoever was on the receiving end would stop talking to me and I’d finish my three years at Habataki High School without a boyfriend.

For me that’s not a fail, that’s a revelation.

And when I first realised I didn’t have to live in fear of displeasing any of these virtual people I was more than a little bit upset with myself – that thought process is not, for want of a better word, normal. Which means I’m not normal. Which isn’t news to anyone really but I was always hoping to be more amusingly quirky-weird abnormal than buried-trauma-manifesting-in-unexpected-ways abnormal. Still, here I am regardless. This realisation may have hit me harder than Opa-Opa’s 16-ton weight but it did allow me to really understand what had been going on and the knot in my chest started to ease off – getting compliments for wearing fashionable clothes and still being able to walk home with whoever I happened to see after school that afternoon started, cautiously, to be an event to look forward to. By the game’s third year I was enjoying myself and even looking forward to Ruka walking “me” home or seeking me out so he could ask me out on a date. I’m still not entirely comfortable with this but thanks to Girl’s Side 3… I think I’d like to be. 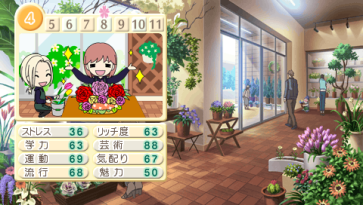 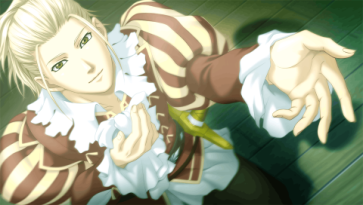 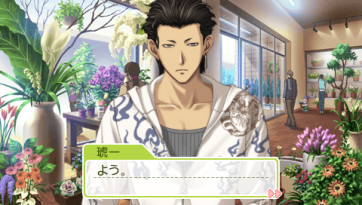 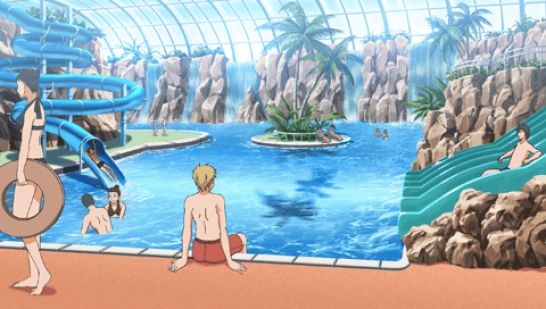 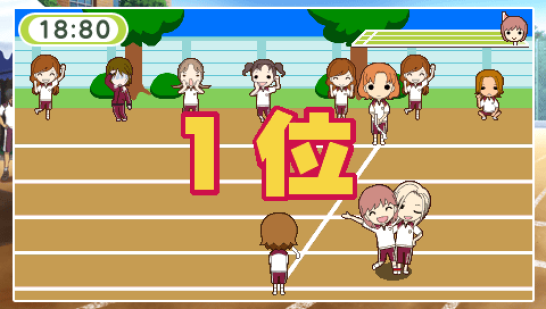 The twist in this sorry little tale isn’t that I’m about to abandon my loving husband and marry my PSP because I’m head over heels for a (very well animated – Girl’s Side 3’s “Live 2D” is really impressive) drawing of a young man, or that Girl’s Side 3’s writing is so remarkable it’s as intimate and loving as being in a real relationship – it’s not. The greetings, dialogue choices, and basic date events repeat an awful lot and for all of the eighteen years (!!) that have passed between the original TokiMemo’s debut on PC Engine and this PSP game’s release the whole affair is still very much about stat manipulation and using mechanical repetition to produce the desired outcome rather than, I dunno, emotions, for whatever use they’d be in a game about finding true love – dating sim’s gonna dating sim, and I suppose there’s nothing wrong with the game sticking to this formula when it’s served the series so well for so long. For most people all this means is it’s another high quality entry in the genre, but for me it’s my own protective little playground of emotions, a private world where I can safely see what it’s like to speak to a work colleague after hours and not have to offer anyone an apology or a grovelling explanation, to have someone make the smallest promise and be reliable enough to actually keep it, to see first-hand that when it does all go wrong negative reactions between two people don’t have to include being threatened or suffocated.

In the end it didn’t work out for me and Ruka – and considering this is the same guy who was still calling me his Juliet long after the school play we starred in had finished this came as more than a bit of a surprise – but I’m still happy. I may have ended Girl’s Side 3 single but I came away from it feeling a little more whole.

[The experiences mentioned in this post are a genuine albeit deliberately anonymised amalgam of past events/people and I want to stress do not involve any friends, family, or acquaintances I have any sort of current relationship or involvement with]

10 thoughts on “Back to school: An unexpected lesson at Habataki High”