I have to open this one with a slightly embarrassing admission: I bought this violently pink set solely for the included PocketStation – having a game as well as some other bits and pieces bundled in there was just a neat little bonus extra for me. That may sound like a bit of a weird way to go about things (and normally I’d agree) but at the time it was the easiest and cheapest way to get my hands on one of Sony’s little VMU-beaters (yes, I am prepared to die on that hill) that didn’t look like its previous owner had tried to polish it with an angle grinder after setting it on fire – or as an eBay listing would describe it “Good condition, a few light marks”.

Since then I’ve used the beautifully transparent PocketStation for all sorts of fun things (I love the design so much I’m even happy to have one hanging around purely as a cute little digital watch) but beyond a quick fiddle just to make sure there were no unusual issues with the disc I’ve not really touched the game itself… until now. And the official Kimimi Verdict™ is? …Yeah. Cardcaptor Sakura: Clowcard Magic is still a PocketStation with a game thrown in.

Which is not the reaction you’d expect to have to a title made by Arika, creators of the mighty Skullomania and the marine-ated Everblue/Endless Ocean games – they’ve got a long history of making (as well as porting) some truly excellent stuff, so it’s a shame to find I’ve caught them on a bad day. 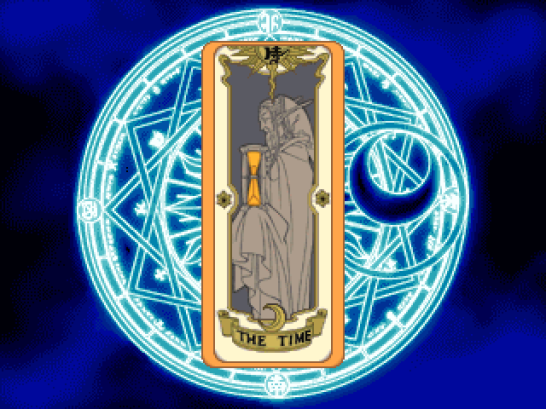 Clowcard Magic’s a colour-matching puzzle game – a noble genre that goes far, far, back into the mists of gaming time, way back when we had literal floppy discs and computer displays that may not have actually been in colour themselves. Columns, Puyo Puyo, Klax… the genre’s always come in all sorts of shapes and sizes so adjusting to Clowcard’s unusual into the screen shooting-puzzle action doesn’t take as long or feel as odd as the screenshots here may make it appear; what is unusual is sailing through all ten stages on the hardest setting available on my first try – and by the end of it still having no idea how the game works. Something’s gone very wrong if you can beat a game without failing on your first go and still come away from it thinking “I couldn’t tell you what happened there”.

OK so “No idea” is a bit dramatic: The basic aim is to shoot a magical projectile down the marked lanes of the same colour as an upcoming card, making the card disappear. There are four colours in total, each corresponding to a button on the PlayStation’s pad so if a blue card’s ahead, you press the cross button (because it’s blue!). If a green card’s ahead, you press the triangle button, and so on. Well… almost: If a yellow card’s ahead? …You press the pink square button – probably because pink and red (the circle button) are a little too similar for comfort. On the surface that’s fair enough – who wouldn’t want these four colours to be easily distinguished from each other while you’re playing? But it’s also an uncomfortable reminder that the game didn’t even get as far as fully committing to something as simple as the in-game action consistently matching the buttons on your controller. If colours didn’t work out, then why not use the shapes instead, or their positions on the pad? Why not come up with anything that didn’t hinge on a half-arsed “kinda but not really” idea?

Sometimes these cards will combo with others of a different colour (either pre-placed sets or mini-combos you’ve created yourself by blind luck), removing whole trails of cards with one shot and racking up a nice healthy score bonus for you at the same time. How does this system work? I honestly haven’t got a clue. After I’d finished the game I had a flip through the manual hoping to see all the clever tricks and techniques I’d failed to understand the first time only to discover that the reason why yellow combos with blue, blue combos with red, red combos with green, and green combos with yellow is “Because we said so”. You’d expect some sort of visual clue or underlying theme to be there, some little “Water beats fire” flourish that makes it all oh-heck-I’m-an-idiot obvious, but Clowcard Magic’s like taking a game of rock-paper-scissors and calling it octopus-apple-towel. Why does the apple beat the towel? Because them’s the rules. When a game places reactions and positioning at the center of its puzzling experience then it’s crucial that the core mechanics are so rock-solid you can feel them in your bones – so it’s somewhat telling that Clowcard Magic comes with a set of combo-explaining stickers to put over your joypad’s face plate, and a little sad that there’s some evidence they were aware of the issue and chose to fix it in the worst way possible.

Not that this is the first puzzle game I’ve failed to understand from the off – I still don’t understand Puyo’s chaining system (I know, I know…), but even though I couldn’t deliberately set up a decent blobby chain if my life depended on it I can still see how it works and I have a rough idea of when a chain’s coming or not, even if I can’t really take credit for it. A puzzle game’s systems should be immediately obvious – a Puzzle Bobble pop, a Gunpey line, a Tetris, um, Tetris – the basics are straightforward, and the skill comes from learning how to perform those basics well. In contrast Clowcard’s combos are woolly and obtuse, and that decimates the skill and satisfaction that’s normally involved in setting up a clever chain and then watching it play out. 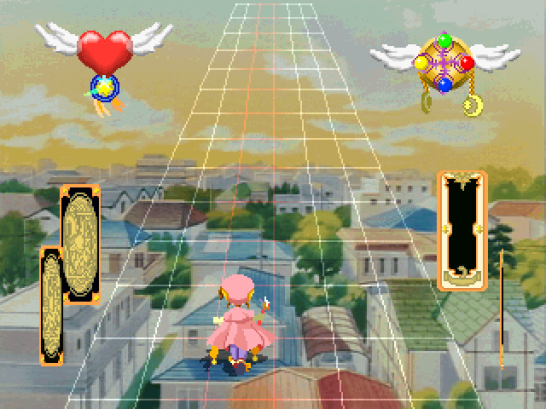 At least a game based on a popular license can always fall back on brand recognition if the game’s struggling to stand on its own two feet, reviewers reliably dusting off the old “If you’re a fan of the series…” line before walking away into the sunset. Except even here Clowcard Magic feels oddly cold and distant – it’s only ever you (as Sakura or Syaoran – the difference is negligible) against the incoming wall of cards, with nary a CPU or 2P opponent in sight. This feeling of personality-free isolation is only amplified by the abstract look of the stages themselves, always a plain wireframe grid with an endless expanse of “whatever” underneath. Even when Taito took to digitising random photos for backgrounds they at least went for visually interesting subjects like ancient landmarks and sunkissed beaches – here you’ve got exciting locales like “some buildings”, a wibbly fire effect that would have made for an impressive spell effect in a SNES RPG five years earlier, another wibbly effect (water this time), and a generic starfield that doesn’t even have the decency to do the whizzy parallax star thing like all good games with space backgrounds should. It all feels like a huge waste of a character-based license, even for someone like me whose knowledge of the franchise could be summed up as “I think I know which one’s Sakura’s friend and I recognise the mascot character when I see them”.

If you need a break from the game’s half-hearted attempt at puzzling you can spend some time looking at unlocked card and character artwork in the gallery or have your fortune told by Sakura, Syaoran, or Kero – although as they’re (not unexpectedly) using the series’ fictional “clow” cards and weirdly decided to play this section straight you’re left with a hollow lump of text that has neither the overwrought daftness of:

“When that the angel readeth these words of mine, in his shoppe of other menne’s books, then the final days are certes upon us. Open thine eyes to understand. Open thine eyes and rede, I do say, foolish principalitee, for thy cocoa doth grow cold.”

Nor the potentially amusing babble of a fictional newspaper horoscope:

“Today’s a great day for a bike ride, but make sure you avoid the tigers. A cake will say hello. Your lucky colour is 42.”

I’m at a loss to understand what purpose this mode serves – even when considered purely as a mild form of amusement there’s no sense of engagement with the characters you’re supposed to be calling on for help as their interaction is restricted to a short snippet of dialogue and one small face-on character portrait, and of course the fortune-telling’s less accurate than cromniomancy for goodness’ sake – you’d get a more accurate glimpse into your future as well as better entertainment and life advice from a mass-produced fortune cookie. 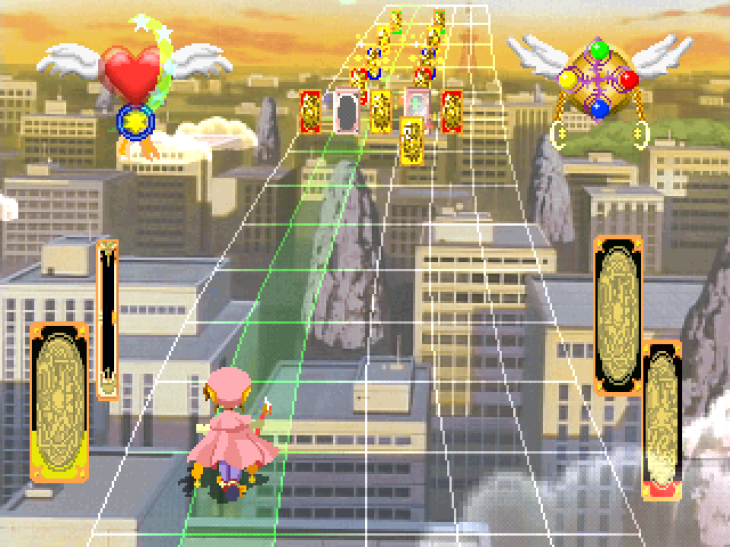 After all that disappointment, maybe we can turn to the wonderful PocketStation to save the package – I’m prepared to put up with a lot if I can get my hands on even the most half-baked Chocobo World-alike, and I’d like to imagine the sort of brave soul who’s survived to this point in my interminable waffle would too. Sadly there’s even less to do here than in the extremely undemanding Pocket Sakura: Should you wish to do so, you can fill up fourteen of your fifteen free blocks of PocketStation data with a maximum of four unrelated voice samples from Sakura and friends. That’s it, that’s your bonus feature. Why? Your guess is as good as mine.

Clowcard’s a superficially polished but weirdly vacant experience that makes no serious effort to either scratch a puzzle gaming itch nor throws in enough Cardcaptor Sakura bits and pieces for fans of the license, casting the overall package into a sort of gaming limbo: It’s not bad, or good, but most bizarrely of all it doesn’t even do enough to be considered an average “Fine if you like that sort of thing” kind of game, it’s just… there. The most remarkable thing about this game is the included extras, and even those are easily outdone by a whole heap of earlier rivals – it doesn’t take much effort to think of a Game Boy game in a fancy tin (Hudson made a few), or the legendary “Killer Cuts” CD, or numerous computer games with better goodies than this. Best leave this one for strange people who want a PocketStation in an awkward box that doesn’t fit properly on any shelf ever built by human hands and go find both your puzzling and Cardcaptor-ing elsewhere.