Now not so very long ago I went to great foaming-at-the-mouth lengths to explain exactly how classic-flavour Resident Evil just doesn’t work as an all-out action game – it’s simply not built for that sort of thing. The movement system, the fixed camera angles, the… well, the everything – it’s all wrong. So it may sound just a bit contradictory to go and dedicate an entire blog post to singing the praises of a PlayStation action game by Capcom starring tank-controlled 3D characters (and at one blessed point, a tank-controlled tank) laid on top of lush pre-rendered backgrounds but I’m just going to have to plough on through this mess and pray my apparent about-turn all makes sense by the time we hit the bottom of the page.

I am of course talking about Dino Crisis 2, a game that actually feels much closer in its core design philosophy not to the survival horror classic it owes its very existence to but a completely different type of PlayStation game entirely: Bishi Bashi Special. Yes, really. Promise! And that’s not because I’ve finally taken leave of my senses (not that I’d deny that I have) but down to them both focusing on doing the same single thing: Making sure the player’s having as much fun as is humanely possible at all times. 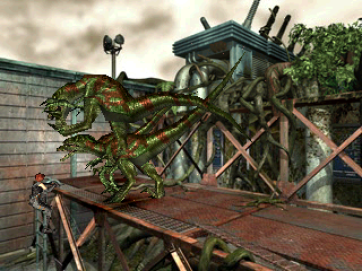 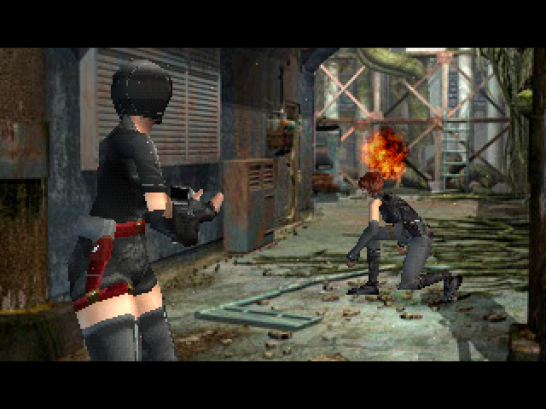 I’d argue that the game swiftly backs my somewhat unusual claim up with hard evidence in the form of an opening FMV featuring a time-travelling boat before swiftly following that up with a literal Dino Crisis (there is sadly no title drop – I’d have loved to hear someone say in a deadly serious military-style tone “We’ve got a real crisis here Regina, a dino crisis, and only you can stop it”) and judging by the direction the story takes after that fabulous introduction I can only assume the whole development team entered into a blood pact with the Old God Streigh t’Veedyo, using their dark powers of bonkers script writing to continually escalate the situation no matter how ludicrous the scenario sounded on paper: After all if they’re going to start with temporal trips to beat up dinosaurs that everyone’s treating so casually they make The Doctor look like a rank amateur then it’s only natural for later events to include taking a tank for a spin against a vindictive one-eyed T-Rex or for Dylan’s barely-communicative teenage daughter from the future to show up in short-shorts and what can only be described as a futuristic motorbike helmet before trying to kill him. The plot’s in the style of the very best kind of B-grade (I feel a “B” might be a little generous there) action popcorn flicks, the sort of thing held together with little more than lots of shouting and sticky tape. But rather than dismissing this bananas scenario as the product of an overactive imagination tied to limited writing skills or a childhood spent watching too many eighties cartoons (can anyone really watch too many eighties cartoons?) it’s important to note that Dino Crisis 2 is perfectly aware of and sincerely revels in its own absurdity – at a point in time when games were trying very hard to “grow up” in a mainstream sense (sadly discounting the mountains of mature stories from years passed) and impress their still relatively new adult-leaning audiences all this title wanted you to do was feel good about playing it; it’d take a heart of stone to not get swept along with such an enthusiastic ride. 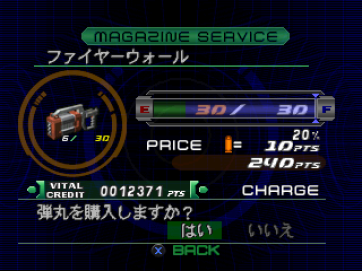 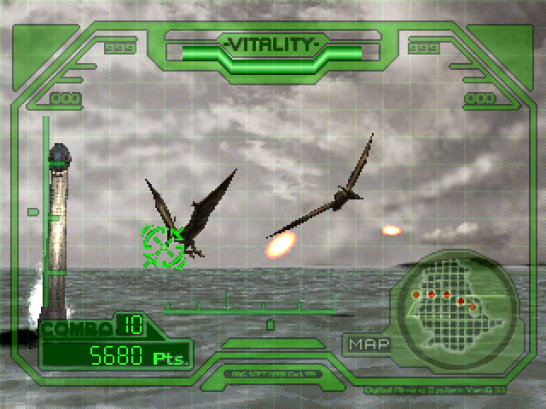 Left at that the game would be an excitable puppy of a diversion – a bouncy and happy weekend’s worth of entertainment but with little substance beyond hoping being bouncy and happy was enough to keep you interested. There’s nothing wrong with games that are like that – everyone needs a “brain off feet up” kind of game (or film, or TV show, or…) – but what elevates Dino Crisis 2 into bestest-forever territory for me is how perfectly the design of the game itself compliments the dinotacular mayhem of the story. Just as the original Devil May Cry retained some of that unmistakable Resident Evil DNA but also firmly established its own identity at the same time, so too does Dino Crisis 2 look superficially like its survival horror parent with added dinosaurs but in reality was created around its own clear vision: To enable you to behave like the sort of of nigh-invincible action hero the game clearly wants you to be – the sort of person who sees an enormous monster from the distant past lurching into view and thinks “Yeah, I’ll fight that, it’ll be fun”.

To keep up with the pace set by the plot (taking in underwater labs, being chased by a pair of rampaging triceratops and one memorable “race for cover” segment where Regina and Dylan must take turns evading an endless stream of allosaurs while the other provides cover – doing more interesting things with the “two characters at once” concept in a single area than Resident Evil 0 managed all game) combat is kept mechanically simple but still feels arcade-style satisfying. The game’s weapons pool may be small but rather than behaving as straight upgrades for one another they’ve been designed to sit comfortably in their own niches and suit particular play styles which has the very welcome effect of making even your starter weapons truly useful from the first moment you use them right up to the final boss. This thoughtful decision also means you never have to fear wasting points on the “wrong” upgrade or sub-weapon at any of the game’s numerous save points/shops: You’ll find some will personally suit you more than others, or one will be weaker per-shot than another (making up for that in other areas), but there’s never a feeling that you’re struggling because you’re using [Weapon X] instead of [Weapon Y].

To help encourage aggressive play as well as experimentation with your available weaponry both characters start off carrying far more ammunition than a member of STARS may find in a whole mansion’s worth of horrors and on top of this magazines for all weapons can be infinitely refilled for a trivial and fixed amount of points from the various save-shops scattered throughout the game. It’s all very clear from the off that you never have to be careful with your supplies or even your recovery items either for fear of running out while you’re busy fighting dinosaurs or that you may not be able to afford to replace whatever you’ve exhausted when you do need a refill due to the generous amount of spendable points the game happily dishes out whenever you change rooms – and this means when you see a group of dinosaurs thirsting for blood you feel like the game is begging you to run headlong into them and take out as many as you dare. 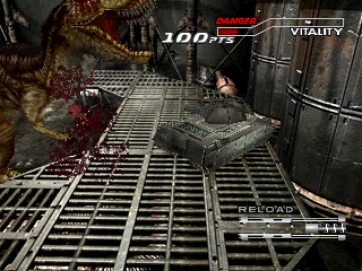 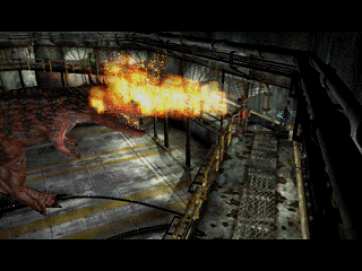 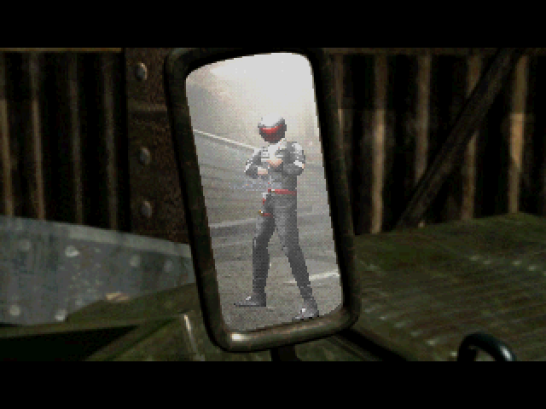 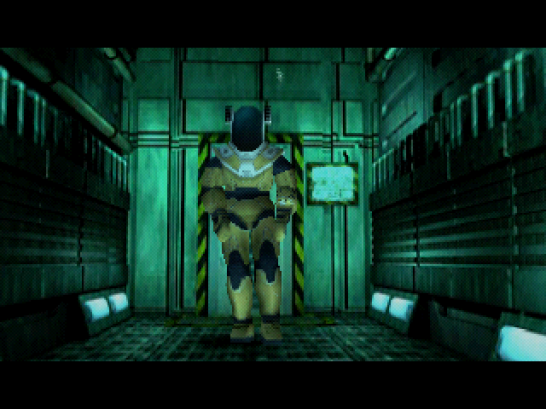 It’s a good thing the game’s so supportive of your gung-ho efforts because most areas unleash a literally endless wave of dinosaurs on you, either leaping out from the bushes or emerging from convenient holes and vents in the walls to replace whoever you just killed. That doesn’t mean this dino-distribution is thoughtless or merciless though – if there’s an area where you need to stop and search for an item or perform a particular task then the dinosaurs will either stop appearing after the first batch or never show up at all, making sure that when you do come across something with more teeth than braincells it feels like the exciting combo-boosting points-pinata it should be and not yet another irritating distraction standing between yourself and the one thing you really need to do.

So does this mean the game’s all roar but no bite? That it’s too eager to please, too quick to skew everything in the player’s favour for the sake of brainless shooty-bangs fun times? No. It’s important to consider how the action is framed: The game isn’t trying to make these encounters tense do-or-die situations – theropods of any type, even the screen-filling ones that shake the ground and can (and if you’re unlucky – do) swallow you whole, aren’t meant to be ruinously dangerous to your health. You’re supposed to be enjoying the the rough and tumble of a dramatic scuffle, to take risks and get stuck in for the sake of an impressively high arcade-style combo streak, to stumble across a setpiece battle and think “YESSSS ITS TIME TO KICK SOME PREHISTORIC POSTERIOR” before unleashing a barrage of missiles on them or a big zappy ball of electricity. It’s about being excited – because why shouldn’t a game combining time travel and dinosaurs and a SPACE CANNON FINALE be anything but hugely exciting?

It’s rare to see a game be so serious about being bonkers – to be so infectiously confident and happy just being itself that you can’t help but love it. But that doesn’t make Dino Crisis 2 a vacuous novelty act – it’s not a game to laugh at, but with. Even without the dinosaurs and all the rest it would still be a genuinely great action game that wholly succeeds at everything it sets out to do, a wildly inventive experience that does more, and better, even just in it’s one-off “gimmick” events than lesser titles can hope to achieve all game.