Stories usually describe the legendary city of Atlantis as a wondrous place – imagine a fantasy version of ancient Greece but with more ornate fountains, fish, and the casual use of technology so advanced it easily blurs into the magical and you’re halfway to writing your own tale already. Whatever take you read on the place it’s invariably a peaceful civilisation based around Poseidon-worship, philosophical discussions, flowing white robes, and a mystical treasure or ten. It may always end up lost forever beneath the waves by the end but even then you can rely on the city’s fate to be written as a warning for others, a solemn tale of mankind’s hubris or the dangers of displeasing the gods: Unless you’re playing Tomb Raider, the game that launched a thousand fake nude cheats. As we all know Lara Croft’s debut adventure is for the most part an engaging athletic-exploration game with a gently atmospheric soundtrack (and sometimes dinosaurs) – it’s just also happens to think Atlantis should be less mermaids and temples and more pulsating exposed muscle-walls and bone and nightmares. 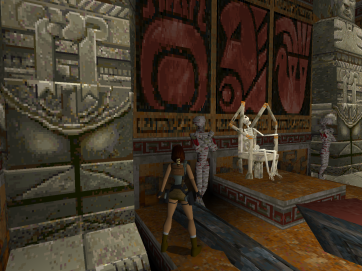 As surprises go this unusual take’s a very effective one – nobody really expects a game that pits players against relatively mundane threats like gorillas, angular lava, and a functional statue of King Midas to suddenly assault them with SKINLESS ATLANTEAN MONSTERS IN A CAVE MADE OF FLESH, and yet that’s exactly how Tomb Raider’s climactic final areas play out. It’s far from the first game to subject players to genuine unease in unexpected places: Ecco the Dolphin is an easy example of horror permeating what appears to be a game about happily splashing around with cetacean friends to its very core, but what’s surprising about Tomb Raider is how deliberate and committed it is to this final twist in its tale. A reveal as extreme as this one wouldn’t have a hope of hitting its mark unless real work had been put into crafting the build-up, and Tomb Raider features a very carefully considered set of events to introduce players to these more unusual elements.

Your first face-to-face meeting with these violent structures of teeth and sinew comes very early on in the Tomb of Qualopec – only the fourth level of the game – and is so subtle you’d be completely forgiven for not noticing anything at all. Here’s what happens: Qualopec’s final resting place houses not only his fragment of the Scion but also his skeletal remains sitting on his unusual throne/bone-suit/whatever the heck it is in those flashback FMVs, flanked by two mummies in a typical god-ruler/guards sort of arrangement. The mummies have a certain strangeness to them – their silhouette’s not quite human and those patches of red showing through their bandages don’t feel right but even so they still fall more on the interesting-weird side of things than horror-weird, and it’s easy enough to waltz up to the Scion and rush off without giving the room any thought beyond “Hey there’s that thing I’ve been looking for”.

But if you do take the time to look… the mummy on Qualopec’s right watches Lara as she moves around the room, and if you shoot it enough times it will eventually give out an unearthly groan before falling over dead. There’s no need for any of that to happen as far as completing the level’s concerned, but it’s a little seed of wrongness in a game that until that point had been straightforwardly Indiana Jones-y and a small taste (or warning, depending on your point of view) of things to come. The obvious move after this minor reveal would be to pepper the game with similarly unsettling things to make sure everyone knew something wasn’t quite right with Lara’s globe-trotting quest, but Core Design bravely went the opposite way entirely and the next few levels have no Atlanteans (living, dead, or mummified) in them at all, leaving players to wonder if that first creature was just a weird one-off a bored level designer put in for a bit of fun, or in the days before always-on internet and countless walkthrough videos, if they ever really saw anything at all… 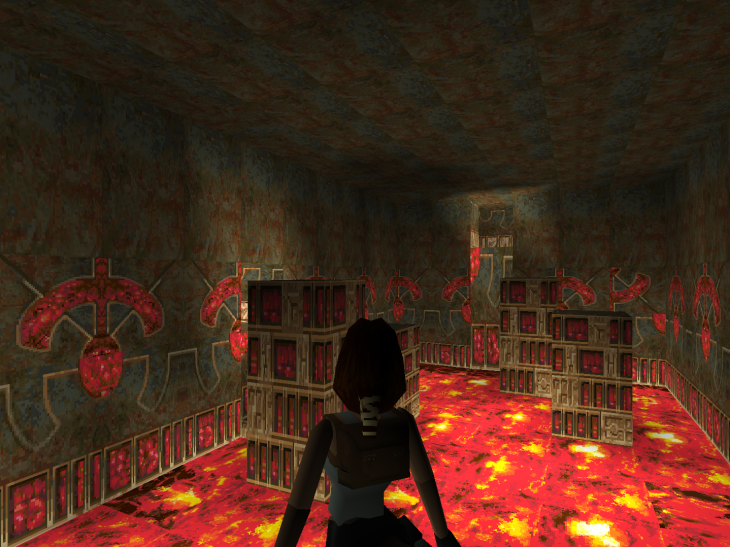 Which only makes the centaur statues OH WAIT NO THEY’RE ATLANTEANS WITH DEVASTATING PROJECTILE ATTACKS THAT EXPLODE WHEN THEY DIE that guard Tihocan’s tomb later another memorable shock to the system and not too long after that Lara’s finally in Atlantis itself, all marble columns and delicate statu-sorry I meant to say “Looking like something you’d find in Doom“. Everything’s made up of pulsating slabs of bare muscle and… Cartilage? Bone? Whatever it is, it’s clearly organic and disgusting and a world away from the quaint mosaics and crumbling ruins you’ve spent most of the game exploring. What’s especially notable about this huge environmental shift is that you’d expect it to feel disjointed and jarring – like someone had got carried away with the level editor and hadn’t the time to replace their fleshy mayhem with something more appropriate – but those earlier confrontations as well as the brief segments where the uncomfortably squishy rooms or more elegant areas collide with hard rock or long-collapsed sand banks keep this twisted vision of Atlantis firmly grounded within Lara’s world, as real and as dangerous as anything else she’s faced along the way.

Although it’s not really the danger that lingers in the mind over two decades on from the game’s Saturn debut, it’s the unbearable tension of coming across pods filled with skinless Atlantean monsters and not knowing when – or if – they’re going to burst forth and lunge at Lara’s triangular form. This horrible lesson is demonstrated to new players in the very first chamber they come across, as three of the six waiting beasts will erupt from their cocoons if Lara ventures too close, then two of the remainder follow suit once Lara reaches the upper part of the room, and the final one… does nothing. Doesn’t it? Will it open? Won’t it? There’s not much worse in a horror game than a potential threat, and Tomb Raider does an admirable job of setting players on edge and keeping them dangling there in a game that was chiefly designed around climbing or jumping up lots of very square structures. 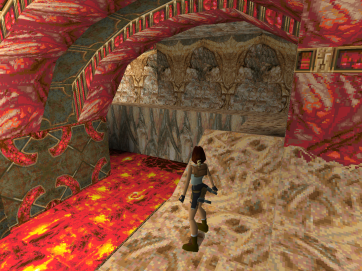 Of course even well done jump scares would wear thin very quickly even without the ominous giant-cocoons-of-doom looming in the distance, so it’s important that when they do decide to attack the enemies themselves back up the threat promised by all the teasing done beforehand – and oh boy do they ever deliver: All three standard types of Atlantean are strong, fast, and incredibly aggressive, tearing through Lara’s health bar with ease whether they’re up close or picking her off from further away. This in itself is something of a surprise the first time it happens as most of the other adversaries in the game can be dealt with like they’re rickety old Doctor Who Daleks, asking nothing more of Lara than to climb up the nearest small ledge and hold down the fire button until they fall over, but in these final stages there is nowhere she can get that’s beyond the reach of these manufactured abominations even if she tries. Even when they’re not on the attack the grunts and moans of these monsters are intimidating and unnatural, and the reaction to hearing one of them giving out an awful mouth-breathing groan from somewhere close is very much like hearing the footsteps of one of Resident Evil‘s zombies shambling towards you from an unseen corner of a room. It’d have been simple enough to make something weird for weird’s sake and call it a day but all of Lara’s Atlantean antagonists – including Natla herself – are just the right (wrong) side of the uncanny valley to make that gruesome leap from “A monster” to the likes of “A half-formed giant baby that drags itself around on its semi-skeletal hands” and “You, if you had peeled your own skin off and wanted to scream and scream and scream but couldn’t”.

Of all the horror games I’ve looked at this month this one – this adventure game that’s outdone on the gore front by 1989’s Prince of Persia, for goodness’ sake – is easily one of the most disturbing. I’m sure part of that is down to how unexpected the spooky elements are but to leave it at that would be unfair – it’s no accident that these inhuman enemies with their permanently exposed teeth and dead eyes are concentrated in a area based around an imposing central chamber so large you can’t see the top when you’re at the bottom, and you can’t see the bottom when you’re at the top, or that you’re given the opportunity to stare down at a nightmarish clone of yourself curled up in the foetal position in the inescapable lava pit you put it in and see it stare back at you.

9 thoughts on “The mystery of Atlantis”