Christmas will soon be upon us once again which for many means an awful lot of cooking things that won’t get eaten, unwrapping socks (“I thought you might need some socks” is a phrase that has been said to me far too often, and by which I mean “More than zero times”), raiding the chocolate tin for the best ones before anyone else does (NOBODY TOUCHES THE GREEN TRIANGLES UNLESS I SAY SO), and avoiding being seen happily playing videogames within view of relatives society would generally describe as “normal” to try and dodge the awkward questioning that inevitably followed: As a child it was “Isn’t she hurting her eyes?” or “Isn’t that going to rot her brain?”; fast forward a few decades and those old concerns about my health have been replaced with appropriately adult worries over the imagined cost of whatever piece of plastic I’m prodding away at – any piece of technology more advanced than a lump of sharpened flint simply must be a finance-destroying extravagance and not something I actually picked up second hand for less than a pack of bloody socks from a popular auction site.

But Christmas Day is long, and there comes a point when this Kimimi’s just got to play a few games.

As an adult the way to handle the day is to only spend it with people you like enough to see for pleasure outside of enforced family get-togethers, but as that wasn’t an option as a kid I discovered the trick wasn’t to resign myself to an afternoon of tedious Monopoly, “Now we’re all stuffed to bursting and in need of a nap… let’s go for a bracing winter walk!” and whatever the BBC had on but to get some properly family-friendly gaming gaming going. The secret, which I now lovingly pass on to you just in time for the holidays, was to stick to this short set of rules:

So what the heck’s left after all that? 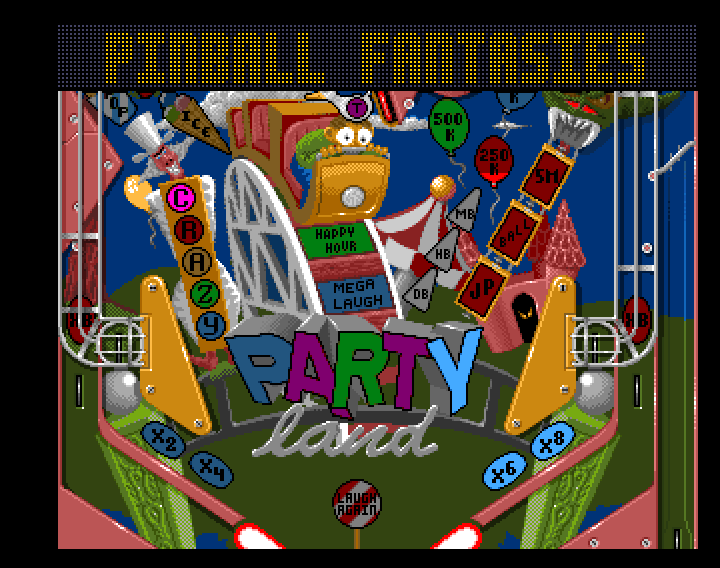 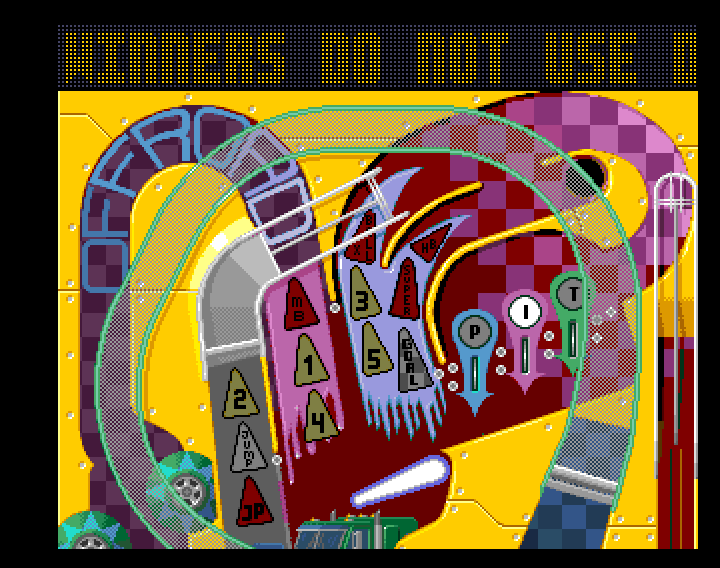 Many people agree on Tetris being the perfect game but I think you could make a strong argument for pinball being the perfectest perfect game of them all: Everyone understands pinball, it never gets more physically demanding than “Press two buttons at the same time”, there’s usually just one thing to concentrate on, and most important of all at a big social gathering… because there’s no direct player-vs-player action family friction is kept to a minimum. Oh and there’s the not-insignificant benefit of getting to have a good swig of tea and a mince pie while you’re waiting for your turn to come around again too.

Fantasies was the excellent follow-up to 1992’s equally well received Amiga favourite Pinball Dreams, this time featuring four different tables split across two floppy discs (in addition to a main program disc)… which might sound laughably basic to some (OK, most) but I really do like the physicality of having specific tables on specific discs – the need to literally place your favourite table’s floppy in the drive makes it feel more special somehow, in the same way that carefully pulling an LP out of its sleeve and having to get up and turn it over halfway through an album is infinitely less convenient than tapping an image on your phone but a heck of a lot more gratifying too.

After Fantasies did its thing (and over the years got ported to more formats than you may expect – including the Jaguar, iOS, SNES… it even ended up as a PSP Mini, for heaven’s sake) Digital Illusions went on to make the equally fabulous Pinball Illusions which was later spruced up and rebranded as True Pinball for the PlayStation and Saturn. Every game in the series is worth somewhere in the region of absolutely stuff all these days, lacking as they do the brand recognition that shifts premium licensed DLC in modern pinball simulations as well as the more videogame-y intensity of certain demonic-themed tables graced with a killer soundtrack – Digital Illusions games are the pinball tables you pick when you just want to play a damned good game of digital pinball.

And as far as the technology of the era allowed it really did feel spot-on: The ball had just the right sort of weight and inertia to it, behaving exactly as you thought it would whether it’s bouncing off bumpers or sailing through a loop and the wide array of sound effects it made as it passed down chutes or was flicked into tunnels really helped sell the feeling of Fantasies being a collection of table simulations rather than a simple game. The faux dot matrix score display (shown above the table on the Amiga version, but below on DOS) was also used for a variety of fancy visual effects that most of the game’s competitors simply didn’t bother with at the time. Peel back all of that gloss and you find a game that was simple and intuitive to play – the down arrow on the keyboard pulled the plunger, the left/right shift keys operated all of the flippers on their corresponding sides of the table, and hitting the space bar acts as the equivalent of giving the whole thing a cheeky nudge (don’t overdo it!). The key placement makes for a good physical approximation of the actions and locations of a real pinball table – always helpful when you’re trying to coax others into giving something new a go. Anyone could work it out just by playing a few balls – and anyone that couldn’t, or anyone who wanted to get a little too competitive over a game of pinball, would find a full and thorough explanation of every table’s scoring gimmicks in the manual.

Let’s take a quick tour of Fantasies four tables in no particular order:

I said “no particular order” but I’m going to make a point of getting this one out of the way first as it’s my least favourite of the lot. Cheesy gameshow hosts aren’t the most appealing subject matter at the best of times but when the theme’s deliberately cranked up to eleven it becomes an unassailable brick wall of immaculately polished teeth. As a table it feels quite simple – there’s not a lot to hit and most of the interesting parts are stuffed away right at the top, requiring you to master that awkwardly-placed upper-right flipper to if you want to hit anything.

Now this is more like it! The targets on the lower half of the table are more dangerous than they might appear, as walloping them a touch too hard can have the ball rushing back towards the flippers before you’re ready for them. Details like “The Tower” “The Well” and having one of your post-ball bonuses measured in screams… well, it all appealed to my edgy “I’m a real grown-up now!” phase that I’m sure all twelve year olds go through, and now I’ve come full circle and am permanently stuck in big-kid mode I can enjoy this table for its brilliant mix of budget movie horror stylings and fun design.

So good it’s the only table shown on the front of the box. Everyone – everyone – likes playing Partyland (apart from people with coulrophobia). It’s got a fabulous balance between the trickiness of some of the scoring gimmicks and the rhythm of the loops like Stones ‘n’ Bones but without the mock-horror decor that your one elderly relative who’s convinced games are just a gateway to full-blown Satanism would disapprove of (you’ll just have to hope they don’t notice that top P-U-K-E bonus).

I’m always a bit torn on this one – looking at it purely as a table it’s as good as Partyland or Stones ‘n’ Bones to play with some really satisfying loops to send the ball up and around (complete with nifty overtaking car imagery on the scoreboard), but the car race theme feels quite sterile and makes it a hard table to really enthuse about.

It’s unlikely many people still have an Amiga set up under the TV for casual use (including me, thanks to a husband who insisted on getting a fancy modern 4K set with no RGB SCART socket no I’m not bitter) but even so the game remains perfect party fodder, a mini pinball platter that’s always enjoyable and approachable regardless of your skill level. There’s enough personality in the over-the-top ghoulish laughter and rubber duck quacks to rope in anyone with even the slightest bit of curiosity and when that initial novelty’s worn thin the tables are more than good enough to be worth spending some quality time with. Whether purchased second hand, downloaded from GOG (DOS versions), or emulated on your format of choice, to my mind Pinball Fantasies is one of the very best original examples of the genre in all of gaming.