Sometimes I love sitting down with a good old shmup like Batsugun; scouring the internet for the best scoring techniques and all the secret tricks they don’t mention on the little arcade cabinet control panel strip, practising day and night until I know where enemies are coming from before they’re even on the screen while squeezing through the tiniest gap in a haze of bullets and eventually basking in the glory of a hard-earned high score with “-ALL CLEAR!-” proudly displayed next to my gleaming initials at the top of the leaderboard.

And if that regard Batsugun’s sure to please even the most seasoned shmupper: There are suicide bullets to avoid, secret point bonuses awarded for destroying (and for not destroying) very specific things at the right moment, hidden cartoon pigs in two colours capable of generating massive score bonuses (and displaying a fun “shocked” animation) if you fly close to them, and minor bullet pattern differences to fret over depending on whether the shot button’s being tapped or held. The game’s often considered to be the birthplace of modern bullet-hell shmups as we know them as well so players can sneak in a little historical game appreciation while they’re at it and I can pretend to be a chronicler of shmups of yore by noticing things in here that I’ve also noticed in DoDonPachi and smugly nodding to myself about it.

The thing is… if I’m being honest with myself… that’s not really why I enjoy playing shmups – and even if I did feel a burning need to claw my way up international rankings it’s never going to happen when it feels like my brain’s been replaced with cotton wool and I’ve got roughly ten precious minutes per day to concentrate on such a skill-intensive game anyway. So for times like these I love sitting down with a good old shmup like Batsugun; picking a ship because I like the way its neon-coloured lasers look, enjoying making everything explode, and watching some fabulous scenery scroll by in one direction at high speed.

And the ships really are impressive, with three evolving types split across six characters (sadly permanently separated across player one and two), all armed with one specific type of laser fire that takes mere seconds to be able to fully grasp without any outside help. When I’m after something a little more straightforward it’s always a relief to know that bar the obvious shot differences shown before committing to a character (and even then there’s nothing stopping me switching to another one when the continue screen inevitably pops up) the ships all behave in the same way when they’re out there shooting down the armies of King Renoselva A. Gladebaran VII with no weird changes to their bomb behaviour, quantity, or usage or engaging-but-complicated changes to the way each ship racks up points either.

Scoring is naturally an integral part of Batsugun’s design, even if it looks relatively simple (I prefer saying “laid back”) when compared to modern equivalents – modern equivalents who seem to have decided the only way to make the genre hold anyone’s interest is to take everything that was good last year and then slap another scoring mechanic on top. There’s a line that can be drawn here with another arcade-born genre – puzzle games. Puzzle Bobble 4 must be “better” because it has more, even if that more for more’s sake means losing out on the beautiful simplicity and streamlined focus of the series’ true pinnacle Puzzle Bobble 2. Batsugun feels very similar to me, being chiefly concerned with encouraging players to shoot at lots of things and not die instead of filling every corner of the screen with combo meters, counters, counters for counters and proximity-based kill bonuses flashing up all over the place. It’s the genre pared back to the things that really matter, a game where I don’t need to make an indexed series of flash cards for every floating icon or coloured gauge. Pickups – both of them – are equally stress free: Floating bombs trace a lazy square around the screen in perpetuity and power-ups bounce off all edges forever rather than quickly fall to the bottom or fly away from the sides – they’ll be there when I’m ready for them, and I can concentrate on dodging this incoming swarm of bullets first if I want to. 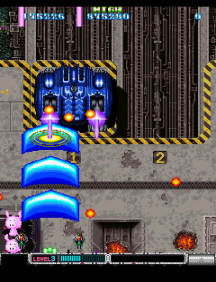 Not that Batsugun’s ever mistakes “straightforward” for “dull”: I enjoy big explosions and impressive backdrops and this game’s got plenty of both. Even the opening section of the very first stage feels exciting as I blast off from an underwater base and spend the whole stage under the sea, whales, dolphins, and turtles swimming by and submerged tanks exploding in a cloud of bubbles… or maybe I just need to play more In the Hunt. I probably do. But! Compared against the usual neo-future cityscape or space station with twinkly parallax background the genre usually gets lumbered with it’s a truly memorable opening level that’s only made eve better by its climax against a mechanical horror bristling with guns that almost fills the whole screen (as all good end-of-level arcade enemies should). It’s great! I’ve got a pad in hand and a big grin on my face as I sit there, blowing things up and occasionally dodging bullets, the collectable medals are very shiny and come in two sizes – large or huge – and as I’m lucky enough to own the Saturn release I have the pleasure of flitting between vanilla Batsugun and Batsugun Special as I please. There are differences between them: Serious, important, game changing differences… that real shmup fans will respect and understand…

There it is again. That gnawing feeling in my stomach that I’m not having the “right” sort of fun with the game – and certainly not one as prestigious and historically significant as Batsugun. I shouldn’t be enjoying it, not even when I just fancy a quick blast on something I have to hand, I should be appreciating it. That’s the “right” way to look at an arcade game by a team as shmup-famous as Toaplan. I should know who the best character is and use them exclusively even during a short half-hour session, regardless of who I like the most. I should always quit instead of using a continue, and I must never, ever, throw bombs outside of that one secret bit on one boss where I must throw bombs for my score’s sake, which will never be high enough to impress anyone who’s played the game anyway.

Then I thought about where these games come from, and the environment they’re designed for – the arcade is practically the Valhalla of gaming after all, a place for proven warriors to revel in their craft forevermore: There’s always that one guy who comes in and somehow hogs the Pac-Man machine for an hour off a single fifty pence piece, and a Time Crisis 5 machine displaying a high score table filled with just one person’s set of initials. However… arcades also have crane games filled with cute toys at the front and shiny coin pushers to entice people in, and for every one person dominating a Cave shmup squirrelled away in a distant corner there’ll be fifty others who come in and play whatever driving or light gun game’s closest to the front door for a single credit before walking off with a bag of chips in hand and think nothing more of it than “Yeah, that was fun.”.

Arcades can be – no, are made for – both extreme ends of the gaming spectrum and all the players in-between, so it stands to reason that the games within them have the same accommodating nature as well. My home is now my own personal arcade and I must remember to treat it as one, allowing myself to wander from game to game as the mood takes me or to become completely absorbed in a single title that happens to catch my eye. Both experiences are equally as equally “arcade” as the other, and Batsugun’s flexible enough to suit either mood.