A rag-tag bunch of battle-hardened survivors of a past war and prodigious specialists picking their way through the dark.

Out of control robots and bizarre creatures roaming the dark halls and abandoned rooms of an eerily quiet space station orbiting a planet a million miles away from civilisation.

Shadoworlds has all the hallmarks of a tense sci-fi classic… if only the characters could get through the damned doors. 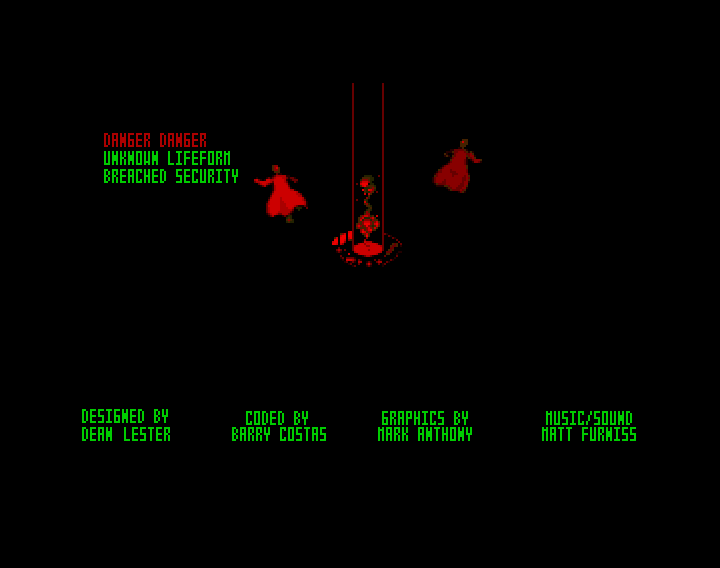 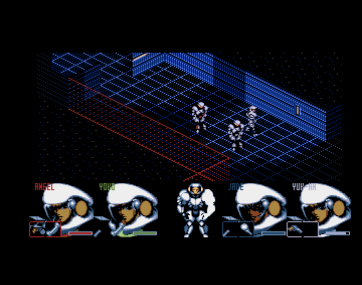 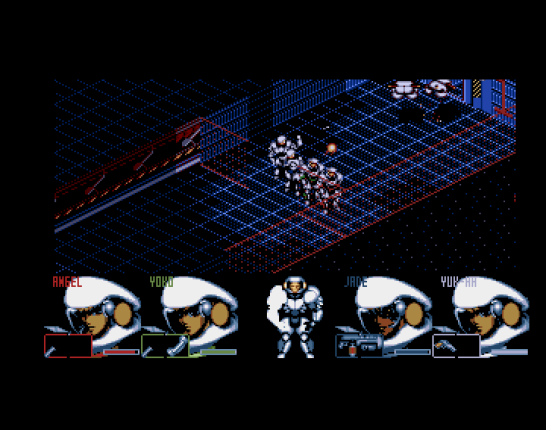 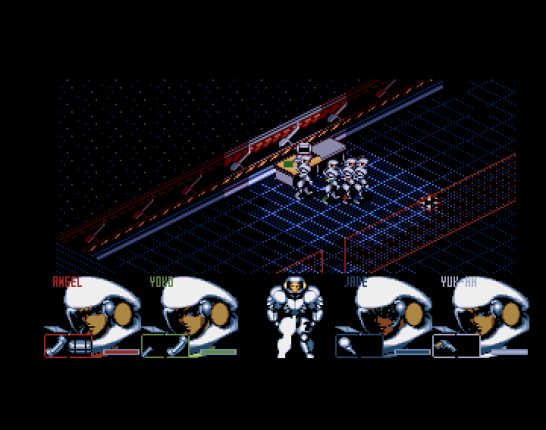 Teque’s 1992 follow-up to their similar fantasy-themed game Shadowlands brings plenty of ambitious concepts to the good old Commodore Amiga… only to then perpetually struggle to cope with the tasks it asks itself to perform.

Most of the game’s problems stem from its unusual control system: Rather than use individual icons, hotkeys, or context-sensitive clicking to issue commands to your hand-picked squad of explorers everything is instead controlled using the spacesuit avatar shown between the character portraits at the bottom of the screen. Click the face to examine nearby screens (hold to turn on the selected team member’s headlamps), the left arm to use whatever’s held in the first item slot (or attack if a weapon’s equipped there), the right arm to interact with switches or pick things up, the left leg to move all nearby units together in formation, and the right leg to only move the currently selected unit. It’s one of those ideas that’s almost intuitive – using a leg to walk certainly makes sense – but in practise is infinitely worse than the less inventive cluster of rectangular boxes with words written in the middle of them. The icons are all different sizes and shapes for starters, making clicking on some tasks more likely to work first time than others, and several hours later it still takes me a few goes to remember which arm prods switches and which one viciously batters security droids with my currently equipped weapon. These little molehills are turned into snow covered mountain peaks by Shadoworlds’ real time gameplay: If you happen to spot an enemy across the room and want everyone to attack before it turns around and unleashes a team-killing bolt of energy you’ll need to click on an individual portrait to select a character (there is no All>Attack>Target shortcut), click on the avatar’s left arm (our left), hope the cursor registers your murderous intent as you waft it over a small/thin moving enemy, and then repeat this sequence from the beginning three more times. And heaven help you if you need to dodge.

Unfortunately even the sort of mouse-wielding computer warrior who could execute such fiddly orders with ease would soon find doing so a terrible idea, as the AI in this game is literally laughable: My son couldn’t stop giggling as he sat next to me, watching my team think nothing of repeatedly shooting each other in back of the head as they stood rooted to the spot and firing in a direct line at the enemy, regardless of whatever came between the two of them. In fairness the teammate on the receiving end acts no better, happily standing completely still even under close-range flamethrower fire until they expire. Nobody ever ducks, or moves to the side, or even simply refuses to fire if their shot’s going to hit a friendly target – I’ve had half my team die to each other as a robot continues to aimlessly patrol a corner of a room on far too many occasions, which is any occasion that happens more often than never. 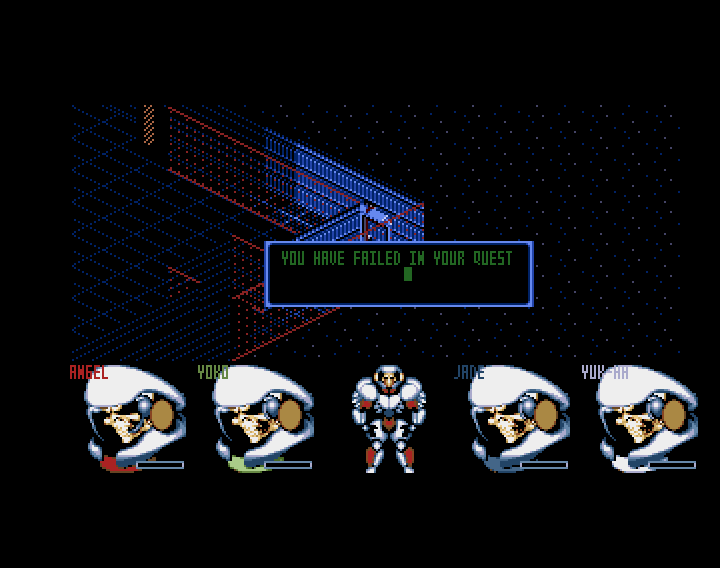 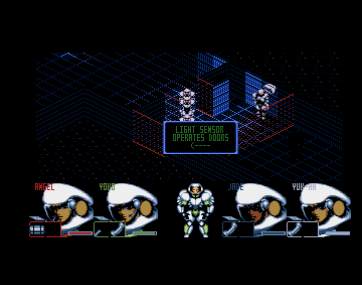 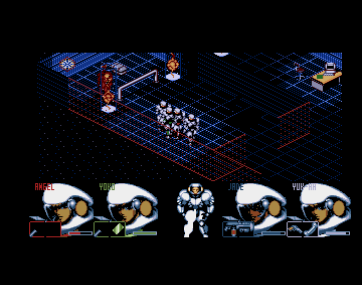 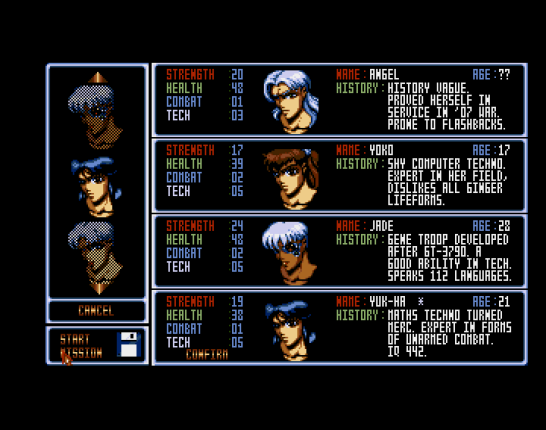 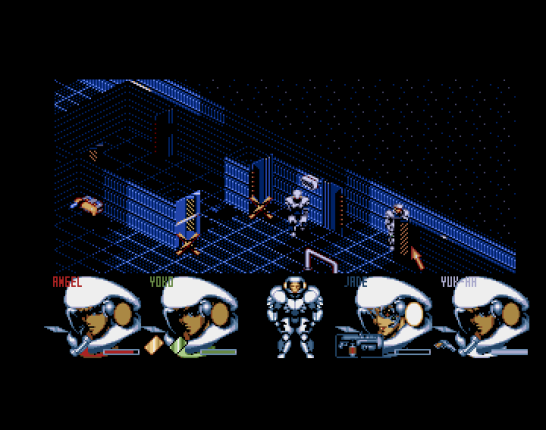 Suffering death-dealing problems during combat is bad enough, but Shadoworlds decides that even doorways are potentially life-or-death situations, the navigation of which must be carefully managed lest anyone get left behind. I’ve had the team automatically split itself in two, half going ahead and the remainder wandering away in the opposite direction, just because the pathfinding couldn’t cope with them all walking in single file through a narrow entrance. I’ve had someone get stuck in a corner and need step-by-step clicking to free them. This team of spacefaring combat vets have even got caught on office chairs and featureless walls – and they’ll take damage for doing so. Just getting everyone into the same room is such a delicate and unreliable task I’ve literally saved the game after doing something as monumental as walking everybody through an unlocked door.

Equipment fares no better. Guns are often split into front/back pieces, allowing you to customise weaponry based on swapping in/out compatible parts. I love this idea: It’s simple to understand, allows for some survival-style “We’ve got to make do with whatever we can bash together from scavenged remnants” play, and offers a little customisation for those who thrive on such things. There are, of course, numerous problems with the way the game handles an otherwise straightforward system. These double-part firearms sit as two separate halves in a character’s held item slots, and anything they pick up along the way – a medikit, a flare, a keycard – isn’t automatically squirrelled away in their general inventory but added to their first held item slot. You can see where this is going, can’t you?

Yep, that’s right: What was two seconds ago a beam cannon-toting toughie is now left holding a crate and the back end of a non-functional gun – and some gangly monstrosity with a long-range attack has just shuffled out of a nearby dark corner… It takes a trip to the menu screen to sort out something that shouldn’t need sorting out, enabling you to pass this new item alo- oh wait no, you can’t pass it along to someone standing three feet away – teammates have to be within touching distance to swap items. There’s no arguing that it makes perfect sense to not be able to send things to someone standing in the corridor outside, or even all the way across the room, but when everyone’s in perfect formation and you still have to pass things down a chain… it’s not even infuriating, it’s just petty. 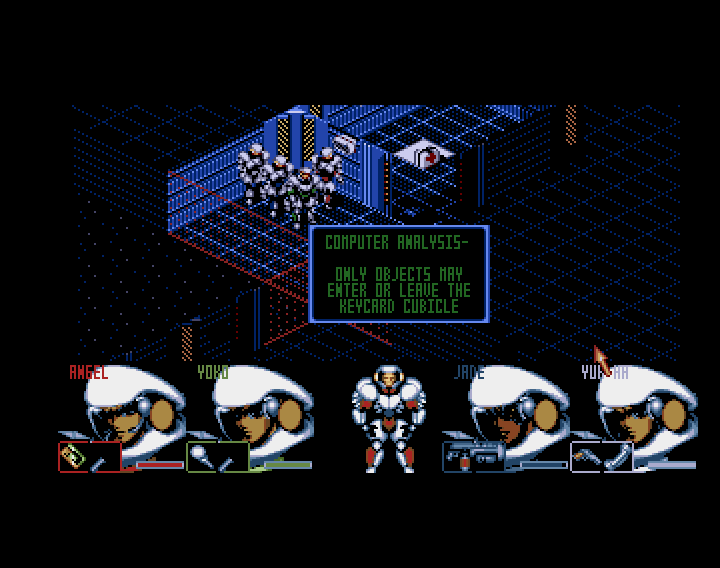 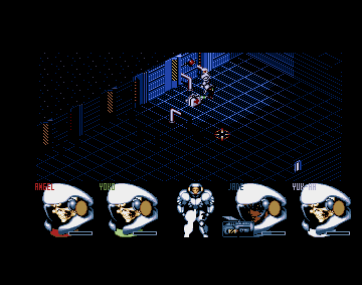 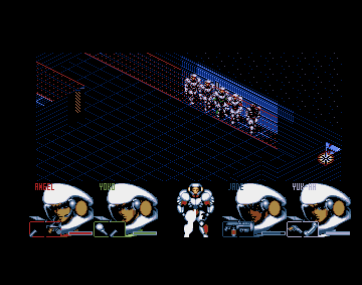 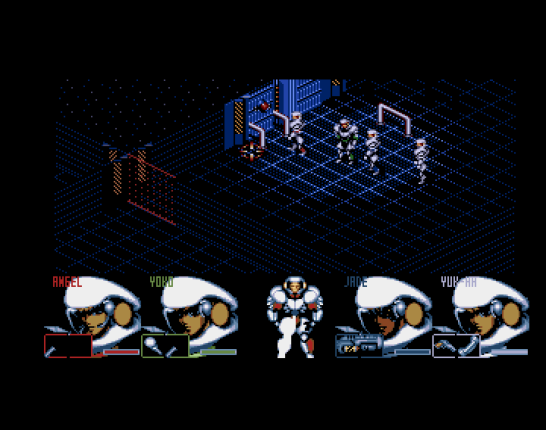 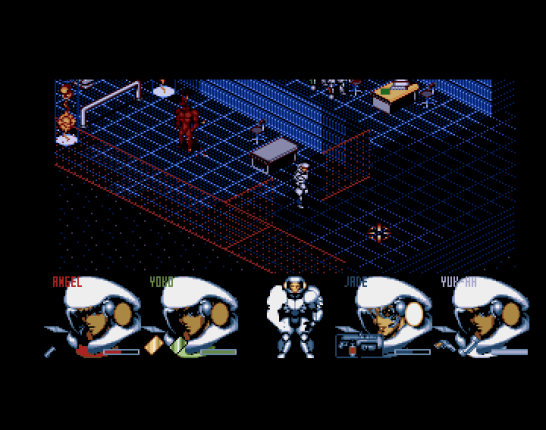 And all of this fiddling does a lot of damage to the claustrophobic ambience created by Teque’s incredible “Super Photoscaping” system, a technique that calculates light intensity, direction, and whether the source is occluded by doorways or sharp corners in real time. Thanks to this technical wizardry gunfire can travel down a pitch-black corridor, lighting it up as it goes before bursting into a bright plume as it hits the far wall, an ignited flare can be carried around or thrown across a room, and battery-powered headlamps can dimly illuminate the surrounding gloom – this play of light and dark is the main reason why I can still remember staring at magazine screenshots of the game almost thirty years ago. Sadly this beautiful style has little meaningful impact on the game design itself: If a door doesn’t need a keycard to open then it’ll more than likely need you to shine a light on a nearby photosensor instead (or perhaps three at once, with the remaining character now free to pick up whatever was left on the floor for them to find), which isn’t even close to a puzzle at the best of times and makes no narrative sense unless it is completely normal for other humans to operate a top-secret weapons facility in total darkness.

Shadoworlds is filled with these missed story-related opportunities. Your bizarre crew can contain spacedogs, green-skinned people, cyborgs and teenage tech wizards but once you’ve got past the character select screen it makes no difference as nobody ever comments on anything at all, not even so much as a personalised “Ouch!” (or even a generic one) as they shoot each other to death for the nth time. Computer screens above morgue carts draped with bloodstained sheets or weighed down by covered corpses will take the trouble to say “They’re dead” in four different ways but say nothing about when, how, or even who. “Extensive lacerations to the neck and chest”, “All blood mysteriously drained” or even “Chief Security Officer Jenkins found dead in service duct #375” are all an improvement on “Patient deceased” “Lifesigns absent” and “Patient has no lifesigns” – you’d think the cold motionless bodies under a white cloth would have already given that part away. The game claims to be an adventure to uncover the truth behind this empty space station, but when the closest it offers to plot progression in a level is a monitor saying something like “BIOLOGICAL RESEARCH AREA” and the room behind it looks much the same as any other it’s hard to shake the feeling that the real mystery is “Where did all the story go?”. Even Dungeon Master, narrative-lite game that it is, has more meat on its bones: that feels like an environment that’s actively toying with you even though the lost scrolls and carved wall messages are in reality few and far between.

Dungeon Master was five years old by the time Shadoworlds came out. 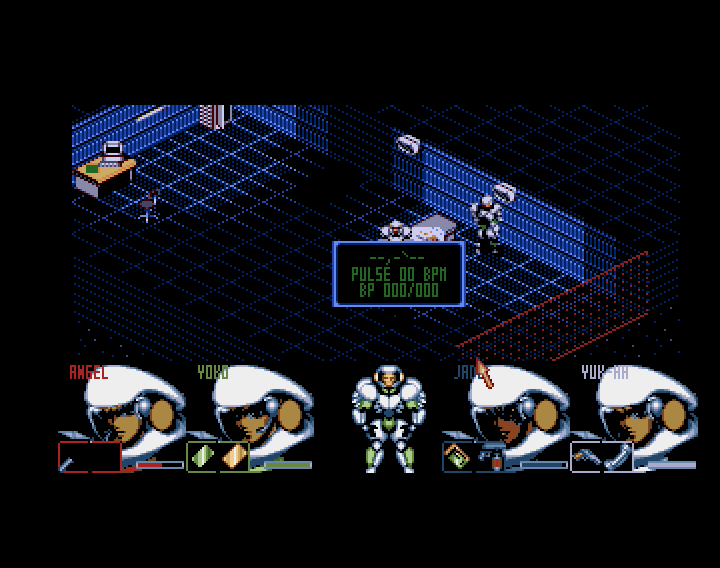 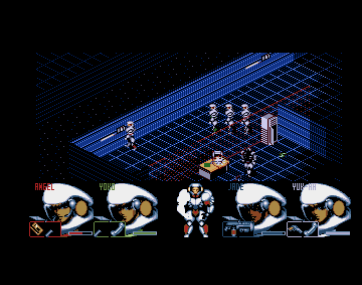 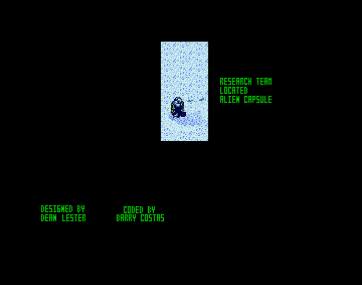 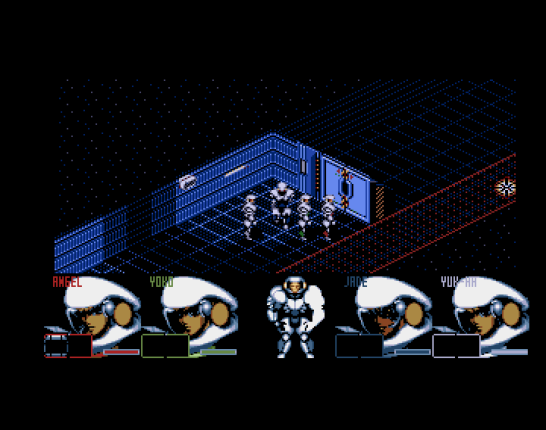 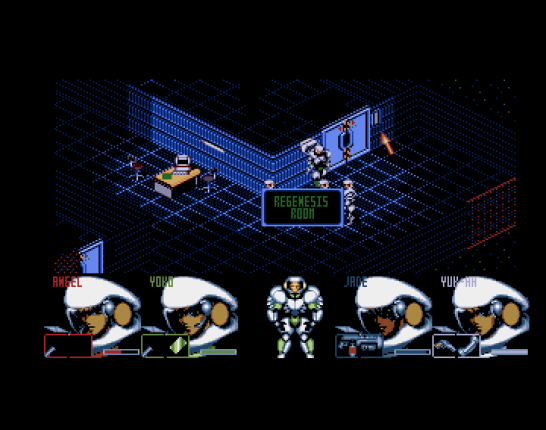 For games of this generation turning to the manual is usually the answer to most problems but outside a few vague sentences there’s nothing to learn this time – no enemy names, no character biographies, nothing. But perhaps that’s because it’s all been safely wrapped up in the included novella, a flimsy pamphlet eager to make bold game-enhancing claims… that immediately goes on to state all of the characters mentioned within can do things your team can never do and has no relation to the game itself. Now the short stories included in Frontier‘s extra book were the same, covering events you could never participate in and starring people you will never meet, but those really did feel like an expansion of the game’s concepts – a hidden taste of what lay in the galaxy beyond your ship’s cockpit or the interior view of a starport hangar – whereas Shadoworlds’ felt like a random sci-fi short story that had been scooped up and lightly edited to fit. I’ll admit I didn’t read the text too closely – it’s not exactly a gripping tale and in any case once I’d seen “Space Church” with my own eyeballs and written without any hint of irony my brain decided it had better things to do and promptly wandered off.

I didn’t get as far as I would have liked to with this before committing keystrokes to blog – I managed to grumble my way through the best part of four levels out of the eleven in total – but once I’d witnessed three people kill themselves in quick succession in a completely hazard-and-enemy-free room by repeatedly walking into a harmless piece of scenery it was clear I had to choose between turning the game off or adding a few more grey hairs to my already streaky bonce. In spite of my personal game-ending issues there’s no denying Shadoworlds possesses some real flashes of brilliance; when everything’s working as it should you really do feel like the commander of a very small team cautiously moving ever deeper through the shadows of a deadly facility. Wandering around in the dark with nothing but a lit helmet and a dim patch of light ahead to guide you is thrilling, and seeing an unknown something lurking in the dark just behind the one door you know you need to go through creates a real sense of trepidation – it’s just a shame you spend more time fighting with the game than you do the monsters within it.