Firaxis have a long history of making incredible games, with their biggest successes not only reviewing well but also fondly remembered as some of the very best in their respective genres. Nobody lets users 4X their way across the globe or outer space quite like they do: Who doesn’t love spending a day watching their kelp farms expand in alien seas or engaging in tense negotiations for tech and resources with other leaders? They don’t even need the grand scale of planetwide diplomacy to provide engaging scenarios either: There’s not much in this hobby as satisfying as seeing individual alien invaders fall to a well-placed squad of overwatch’d soldiers before they’ve even made that first dash for cover.

I could play games like that all day long… and just lately that’s exactly what I have been doing. Alpha Centauri has been my go-to “I don’t know what I’m playing but I want to play something” game for so long the first time I bought it I had to walk into a shop and take an oversized cardboard box off a shelf to hand to the cashier to do so. My adoration for XCOM may be more recent, spurred on by the unorthodox combination of Chimera Squad‘s trimmed-down approach and accessibility of the iPad port of XCOM: Enemy Within (XCOM? In the bath?!) before culminating in a clear of vanilla XCOM 2, but it has been no less all-encompassing than my teenage trip out to the stars.

…I should probably admit at this point that I’d have blogged a heck of a lot faster these past few weeks if I wasn’t so distracted by one-more-go’ing games with Sid Meier’s name in the credits. Oops. 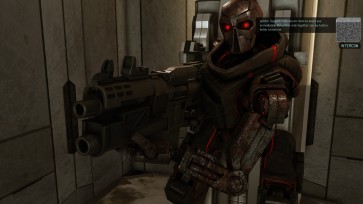 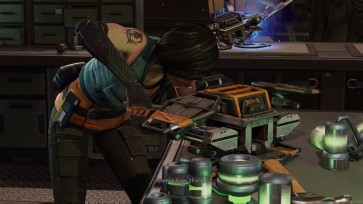 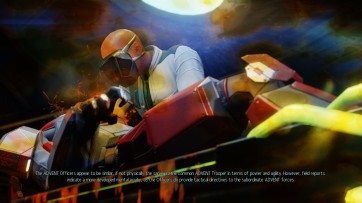 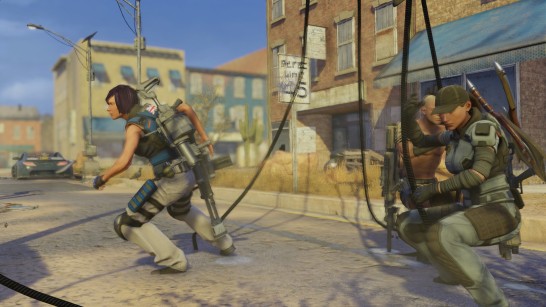 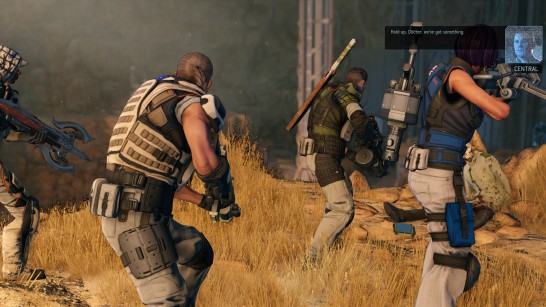 Both of my alien-tinged tactical loves are as challenging as they are deep, rewarding players interested in strategic trials with enthralling sandboxes bursting with an almost endless range of possibilities even before we so much as glance sideways at the breathtaking variety of rule-altering mods on offer. I could exclusively play either of these games all year long and between their broad range of options, the slight randomisation of in-game events, and my own personal choice to perhaps try ruling by force rather than diplomacy this time or fielding a full squad of in-your-face rangers just for the heck of it, I’d have a perfectly fulfilling gaming year.

Except the “right” things to like about these games – their complexity, their deep, deep, well of potential outcomes, their endless alternative ways of tackling ever-evolving scenarios – isn’t really why I keep coming back to them. It’s actually… and yes, I know how this sounds, the characters in Firaxis’ games that have me hooked. It’s seeing the warlike Colonel Santiago squirm over the commlink as she switches from brazen yet empty insults to pleas for another truce as I effortlessly crush yet another one of her bases (and after many turns of her trying to do the exact same thing to me), or watching John “Central” Bradford transform into a scarred battle veteran who can effortlessly take down an entire map’s worth of enemy forces single-handed after spending most of XCOM: Enemy Unknown/Within as a competent and reliable sweater-wearing admin – and after his gun-toting little trip out just as easily goes back to his day job of swigging from a “Commander’s #1 Fan” coffee mug. Thanks to the “soft” side of these hard-edged games I know Chairman Shen-ji Yang of The Human Hive sees no problem in casting his vote at the planetary council meeting to make nerve-stapling the general populace a non-atrocity, Lady Deirdre is being literal when she says she wants to talk to the consciousness of the planet, and no matter what Sinder Roze of The Data Angels says to my face about pacts and treaties I should always watch out for her operatives trying to infiltrate my bases – from her point of view all information should be free to everyone, all the time.

And this is where it all starts to fold in on itself, everything becoming everything else: Those examples above aren’t “just” characters, are they? They’re the gameplay as well. The warlike leader likes war. The sneaky one sneaks around a lot. It makes sense. In fact almost every personality quirk and social preference can be traced back to a particular statistic, function, or faction-wide restriction – and crucially enables those who don’t know their Formers from their Organic Superlubricant or Meld from Mutons to grasp some general sense of understanding, or at the very least form an opinion, on what to the uninitiated may otherwise appear to be a cold and impenetrable web of terminology and confusing interrelated systems. 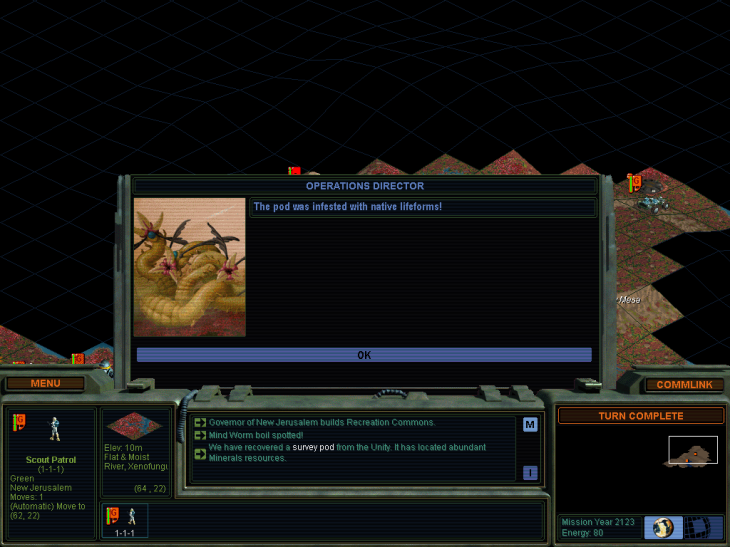 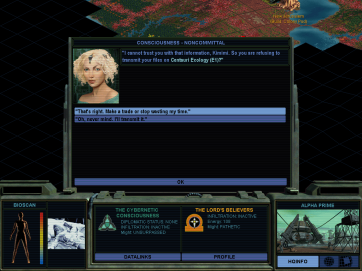 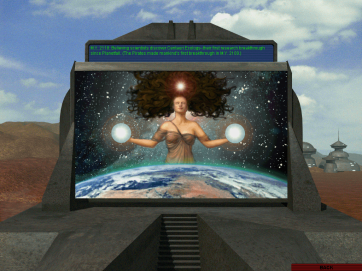 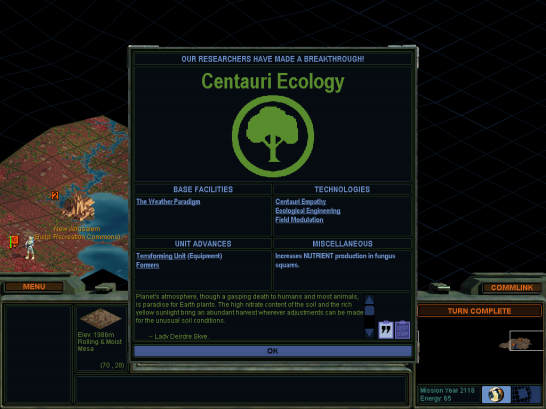 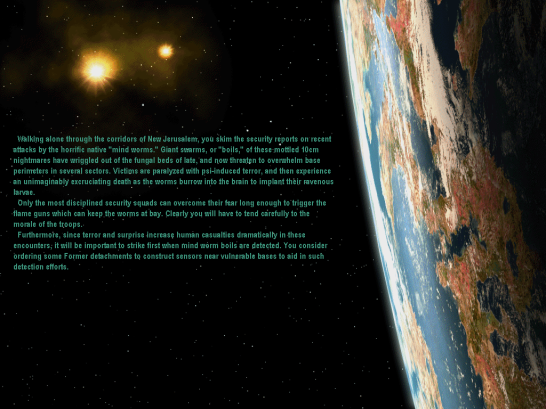 Identifiable emotional traits serve a useful purpose even when abilities get removed between games too: XCOM’s Dr Vahlen was eager to graft a wide range of untested alien characteristics into your battle-ready staff via highly experimental gene therapy – anything ranging from fairly innocent enhancements such as improved eyesight to adding Thin Men-like flexible musculature or unnatural mimetic skin to a human subject. These options are completely unavailable in XCOM 2 – and the characterisation within both games is so strong it’s very easy to believe this has as much to do with Dr Tygan vehemently disagreeing with the rather loose moral compass of his predecessor (he refers to her “a brute” during one conversation, and it’s hard to make a convincing argument otherwise when you’re busy dealing with the unexpected arrival of remnants of her out-of-control biological experiments during an otherwise routine mission) as it is anything to do with game balance or the designers wanting to try out something different.

The people always make sense even when the underlying mechanics (or the absence of) might take a while to understand.

This is also true of generic units or even broad population trends within these games: Disgruntled drones will appear in Alpha Centauri if the populace are not entertained and well managed – they’ll even become a facility-destroying riot or defect to another faction entirely if not cared for (or forced to submit via draconian policing measures and similar government-led atrocities). You never see drones, or workers, or talents, or even the grand faction leaders as more than a static icon yet the presence of this behaviour means these unseen hands still have some abstract form of human presence, of moods and wants and desires that must be taken into consideration as much as energy, nutrients, and other more directly essential supplies. Likewise randomly generated XCOM soldiers, their backstory so insignificant you can choose to at any time rename them all after family members or a favourite sports team, are all likely to feel intimidated by an enormous Muton beating its chest or panic if the person standing next to them gets brutally fried by alien laser beams – these are logical and natural reactions that can be understood without any prior knowledge purely by looking at the visual information given by the game as it happens, so when the unit in question runs off to hunker down in the worst possible place or even waste their last bullet shooting at nothing in particular everyone can get frustrated by their uncontrollable actions, but everyone can also understand exactly why they’re acting that way in the first place. 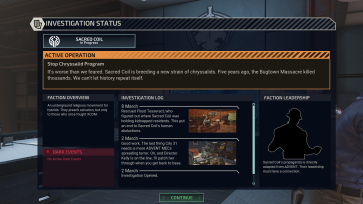 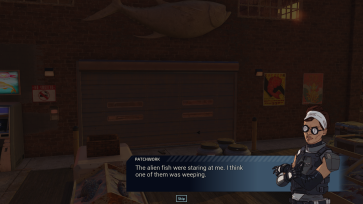 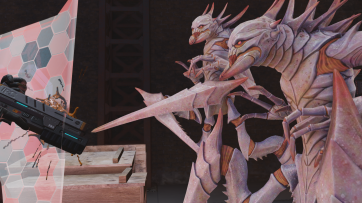 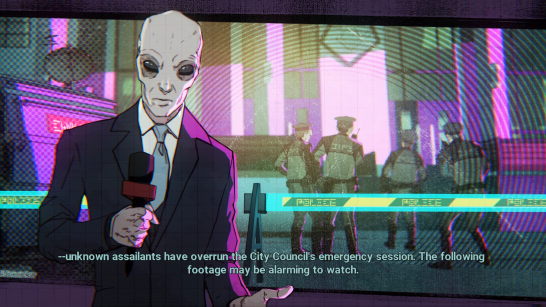 Not everything has to add to the gameplay to add to the game: In XCOM 2 I know exactly how my chief scientist feels about juicy, juicy, ADVENT burgers (the precise source of the meat content within them in a cow-free world best left unquestioned). I know Lily Shen is fiercely protective of the ship she helped her father rebuild (himself already very familiar to players of XCOM: Enemy Unknown), and I know Commander’s Biggest Fan, John “I spent twenty years searching for my captured boss” Bradford, can’t pilot that same vessel well enough to avoid everyone gently ribbing him for his inexperience at the controls. He, of course, has his own opinions on that: “There’s been plenty of gripes about my flying, but I don’t see anyone else steppin’ up other than the autopilot”. These brief snippets of fluff come through at random as you busy yourself with shielding power coils and grenade research, little gems helping to populate your mobile base with invisible lives and plugging the gaps between those big story moments which in turn makes every decision you make feel like it has a place in the overall progression of XCOM’s return to glory, even when you’re not making cutscene-worthy discoveries or storming ADVENT blacksites for precious intel.

It’s exactly the same in Alpha Centauri, even though there’s over a decade and a whole genre between them: I don’t need to read an extract from the fictional “Essays on Mind and Matter” –

– hear some leader’s tangential musings on the latest new facility type, or watch Lady Deirdre of Gaia’s Stepdaughters be mockingly referred to as “dancing naked through the trees” (amongst other things) by faction leaders unimpressed with her ecology-driven ideals (+2 to efficiency owing to their experience with recycling, inherent -1 to the “Police” social stat due to their freedom-loving tendencies), but all of these small fragments add texture to what can in its driest examples feel like a corner of gaming more concerned with charts and numbers than the lives under your command or the other people you’re supposed to by vying for power with. These familiar and relatable hooks can help cut a path through the strategic fog that permeates those early attempts that only turn out to be fail-riddled false starts, encouraging everything from personal investment in a particular style of play to even just persevering on for the sake of seeing where the story goes – just don’t make the mistake of confusing a friendly face for a friendly game: The mechanics hiding beneath these accessible fascias are no less complex for giving your equipment research tree a name and a vocal opinion on your current situation or the exit menu a cute voiceover asking you to stay for the sake of your people – but they do create people out of statistics and clusters of equipment, and make it all the more likely someone who would have given up on a less accommodating thinks “Just one more go…”

One thought on “Strategic personalities”