Konami have something of a… reputation… when it comes to the handling of their many much-loved franchises, and the Suikoden series unfortunately no exception to that rule. Genso Suikogaiden Vol.1: Harmonia no Kenshi, a text adventure (Konami’s exact words there) released in 2000, fills an awkward transitional gap in the saga (to be joined the year after by Suikoden Card Stories and Suikogaiden Vol.2): by the time this came out both the Dreamcast and the PlayStation 2 were sitting on shop shelves, Suikoden II was two years old – and Suikoden III was still two years away. This makes Suikogaiden a sort of awkward pause for the series in physical form, a game well aware Suikoden II’s fan-favourite characters and memorable scenes had been and gone but not quite prepared to let go of that popularity… or entirely sure of what to replace it with.

And now we get to the part where I have to talk about Suikoden’s protracted fall from grace, the inevitable misstep from a disinterested publisher, the cynical money-spinner… except I can’t, because I’d be lying if I claimed any of those terms applied to Suikogaiden. 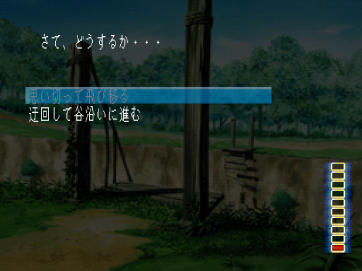 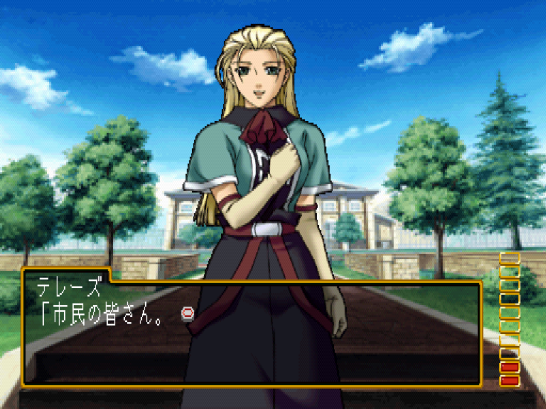 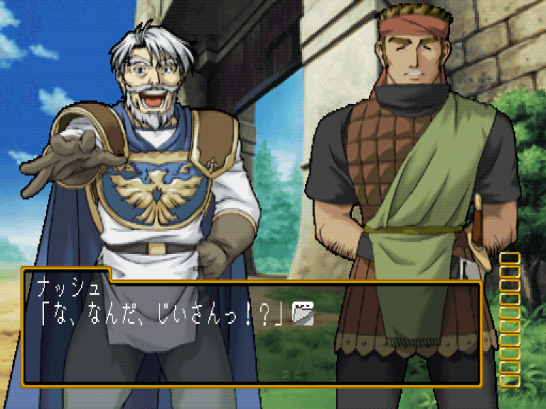 It becomes obvious this game’s aiming much higher than it’s apparent stop-gap status might imply the instant its single CD loads up, quickly diving into an FMV introduction showcasing a combination of exciting scenes from Suikogaiden mixed in with a few key events from Suikoden II and the odd miscellaneous headshot of returning old favourites. The animation here is beautifully fluid and the execution really does make it look as though Konami’s game has sprung to life in a way that wasn’t possible within the previous releases traditional RPG framework. Sadly this flamboyant motion may stop when the story begins but you’ll struggle to find the time to miss it as the static artwork is absolutely gorgeous and the vast majority of the game’s full-screen event graphics are completely unique and frequently changed. Even when Suikogaiden’s not wowing fans with beautiful renditions of recognisable scenes and familiar faces the background imagery’s filled with detail and character portraits span almost the full vertical height of the screen for all but the smallest characters, changing their posture and facial expression to match the text and again employing one-off poses where they would benefit the scene. As with most games of this type any event graphics viewed during the game can be seen again by selecting the “Special” menu option on the title screen.

Which is all pretty fancy but there’s no pretending a story like this, perhaps especially one that runs adjacent to and often mingles with the plot of the mighty Suikoden II, is still going to live or die on the basis of the text within. Nash Latkje of Harmonia (you may recognise him from his later reappearance as a Star of Destiny in Suikoden III) takes the leading role this time, sent to neighbouring lands to investigate the appearance of the true runes. This is all great news for most of us – we’ve just been given the perfect excuse to drop in on a fair old chunk of Suikoden II’s most popular characters in special Visual Novel-o-Vision, and there are even a few extra scenes if you happen to have a Suikoden II save to hand as well (this includes a Suikoden I save imported into Suikoden II, er, too. Oh and your Suikogaiden Vol.2 save can also be imported into a Japanese copy of Suikoden III). However this is a terrible turn of events for anyone who isn’t already acutely familiar with the previous game, as while Nash’s status as both an outsider to the land and almost all the people within it potentially grant him the ability to ask many helpful questions on our behalf, in practise the game expects you to already be well aware of everything yourself and entire chapters hinge on you caring about particular characters, the significance of a battle you’re about to participate in or tiptoe around the fringes of, and the general importance of the true runes. Now of course these are gaiden games, side stories of bigger titles by their very design, but even so some attempt should have been made to make Suikoden’s dense web of ever-shifting territories more casually understandable: An in-game database (imagine someone mentioning the Highland Kingdom and being able to click on the term for further information) or even just some proper background material in the manual – a few short sentences on a handful of characters doesn’t really suffice – would have been very welcome, instead of leaving people who were perhaps a little woolly on the finer details or had never got around to playing the originals in the first place (it can happen to anyone – some of the “must play” games I’ve never touched are downright embarrassing) high and dry. 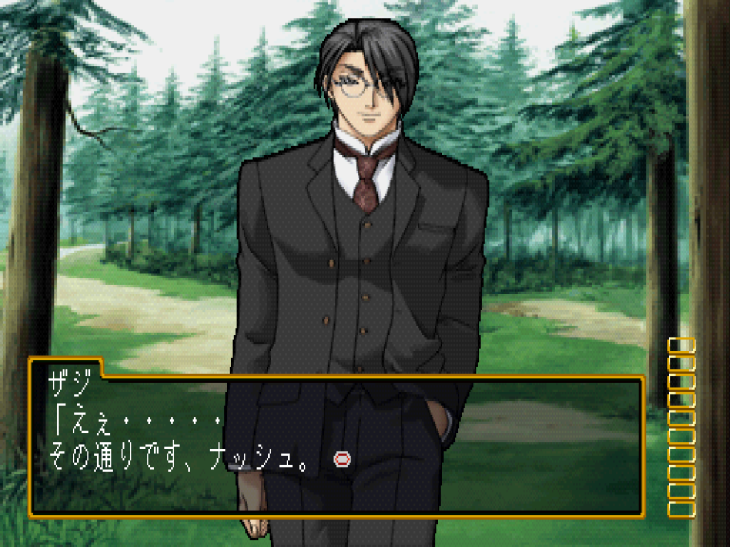 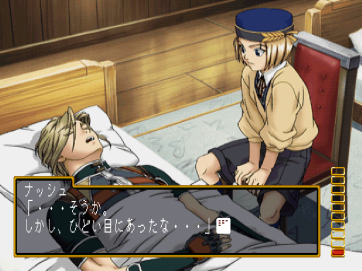 Aside from this newcomer-resistant stumble Suikogaiden handles its text well, and in a game like this that doesn’t just mean “Has an enjoyable plot” either, but also how it’s interacted with it. One small but wonderful detail is to see text is presented as the speech is spoken – a full, calm, sentence will be displayed smoothly with all the proper punctuation exactly where it should be but a more surprised expression might be presented as:
“A-”
“A-”
“A-”
“A GHOST?!”
with the player manually pressing circle (or any of the multiple alternative confirm buttons spread across the PlayStation’s controller) at the end of each line to advance the text. This difference, and yes all the damned lines of nothing but ellipses that force you to indulge in long exchanged silences, give the text a pacing and rhythm it wouldn’t have had if it only paused when words hit the end of the text box and it really do add a little extra something that helps bring the characters to life. Other purely practical but appreciated features include different end-of-line marks to indicate whether the same person is going to continue speaking when you press confirm or a scene change is about to happen/another character is going to speak, and the ability to save or load a file any time you like (so long as the game’s not halfway through displaying a sentence). You don’t even have to worry about unwittingly saving yourself into a game-resetting corner either, as there is nothing you can do to kill Nash off or wander into an early unfortunate end.

To throw something a little unusual into the mix Suikogaiden introduces the concept of Luck Points, shown in the small vertical bar on the right hand side of the text box. These points are awarded (or sometimes, taken away) for picking certain dialogue options and can then be “cashed in” during later events, allowing you to select alternative outcomes that would otherwise be inaccessible. On their own that’s a neat little idea but the interesting twist comes from the way points can be saved indefinitely – even across chapters. This transforms your decision making as spending luck on a different choice right now may mean you haven’t the points to select another and perhaps more significant one later. It also means there’s no one perfect route through the game and rarely one definitively good choice to make – and repeat playthroughs will require more of their readers than simply hoovering up all the Choice B’s to their initial Choice A’s. Luck Points are a small touch that make a big impact, one that suggests your actions will have consequences beyond your immediate options and create a branching path system that feels a little more organic and alive than the usual easily-visualised flowchart. All of these diverging routes and far-reaching actions never become too much to bear even on second (or third – it’ll take completionists more than a few goes to collect all of the artwork) run as Suikogaiden’s a fairly short game: My play through all four chapters took around five and a half hours, and by the end I felt satisfied without being worn out. 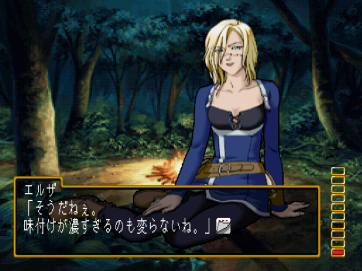 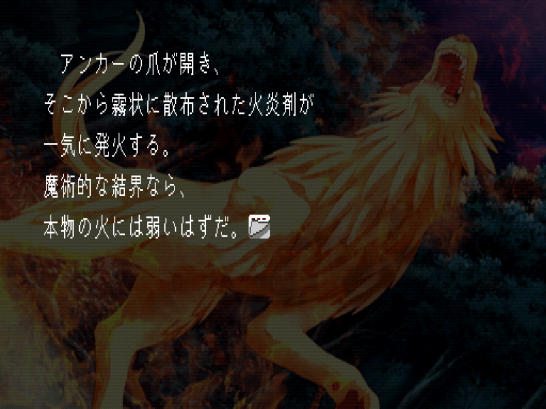 For all the good in here – and there’s plenty of it – Suikogaiden hasn’t wholly convinced me its existence is entirely warranted: On the one hand seeing all new scenes (sometimes even full chapters) starring Suikoden II characters or viewing select highlights from the previous game from an all-new perspective felt exciting, like I was seeing a new side to a much-loved tale. But there’s also no getting away from the fact that Nash didn’t exist in Suikoden II until Suikogaiden introduced some kinda… but-no retroactive shoehorning, making it hard to silence the pedantic little voice in the back of your head pointing out all the times he’s been forcibly inserted into places you know for a fact he wasn’t before. Even so it’s almost impossible to resent such an appealing chap: He’s brave and resourceful but never invincible, amusing and charming but not insensitive or shy of being serious if the situation calls for it. When his own story – and all the fresh dealings with Harmonia and related individuals that go with it – rears its head you sit up and want to learn more, and when Flik, Viktor, and the rest of the gang show up the writing takes care to not sideline Nash or artificially make him immediate best friends with all your Suikoden II favourites.

There’s no question Suikogaiden does its absolute best in a very difficult situation: It has to stay close enough to Suikoden II to soothe the nerves of cheque-writers back at Konami, offer existing fans more of what they know they love to guarantee interest, and also gently inch the series towards… something, even if nobody was quite sure what that future something would be. This release may not quite be a blistering victory lap for the original duology, but I think we can at least call it a pleasant jog around a favourite park.

[My eternal thanks to all the Ko-fi supporters who heard me say “Hey, it’d be ace if I could talk about some Suikoden games!” and responded with a mighty “HECK YEAH” – this post, the next one, and many more to come exist entirely because of you]

3 thoughts on “A Suikoden spinoff, volume 1”