There’s a struggling creative inside me, and in all honesty they should probably stay there. Just when I think I’ve finally put my dreams of releasing a critically acclaimed bestseller to bed 3D Construction Kit comes along and says “Hey you, normal person – would you like to make a game? Would you like making said game to be easy? Then we have the perfect floppy disc for you!”. And I know these programs never, ever, as easy as they say they are and I never really make anything with them anyway, but I can’t help but give it a go just in case…

You may be thinking nothing could possibly be more unsuited to creating home-made realtime 3D than a single Amiga 500 floppy disc from 1991 – but this polygonal game-maker actually debuted on the Spectrum. On cassette. It’s incredible to think they got anything like this out of Sinclair’s little machine even purely as a technical proof of concept, never mind taking it to commercial release (Knot in 3D obviously came first, but this is far more detailed and ambitious). This later Amiga port (the program is also available on Atari ST, PC, Amstrad CPC, and C64) harnesses the greater processing muscle of Commodore’s hardware to bring in a range of enhancements as well as a slightly (slightly) better frame rate. 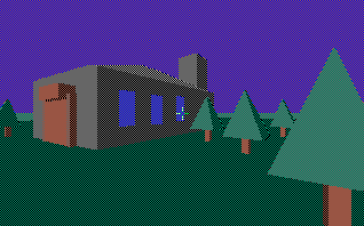 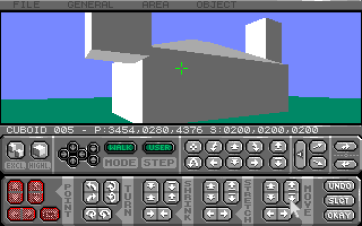 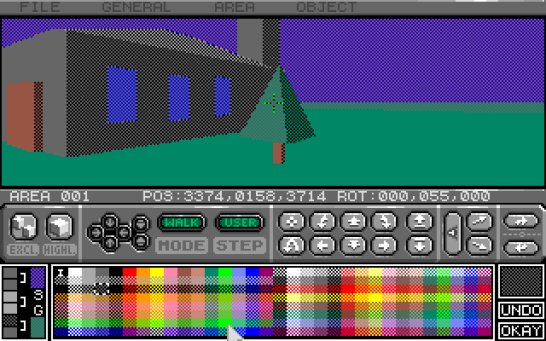 I’ve got the tools, I’ve got the talen- OK I’ve just got the tools but 3D Construction Kit makes a great first impression, automatically booting to a clean workspace and displaying an interface that looks like something designed to be understood by people who don’t code 3D construction kits for a living. Having the default background split between green “grass” and blue “sky”, and being able to see the edges of the “grass” plane from where I’m standing, makes it relatively easy to tell which direction I’m facing even when there’s nothing else in here. Now all I need to do is use all of these clearly-labelled buttons and drop-down menus to make something… I know, I’ll make… a cat! No wait that’s probably too complicated for a first go. OK then… a fish! I imagine a 3D fish, all angled pointy bits and triangle fins. I look at the array of buttons on the bottom half of the screen. …Cube? Cube sounds good. It’s straightforward, definitely 3D, and probably achievable even for a complete novice like me.

And to 3D Construction Kit’s credit making a cube really is easy, even for this blog-writing idiot: I click the “Create” button, then select the “Cube” option, and that’s it! Boom! One 3D box appears before me, rendered using the raw graphical muscle of the Amiga 500. I’d like to take a proper look at this box, to bask in its cuboid magnificence. The right mouse button does nothing, the arrow keys do nothing… ah! It movement must be the numerical pad! I poke a few keys and instantly mess up everything, only able to view my beautiful box from a selection of unhelpful angles with no way to reset. It’s time to do the one thing I should’ve done before I started making anything – read the manual from cover to cover. The detailed cube-making tutorial found on page seven assumes whoever’s reading is the sort of person who carefully follows step-by-step instructions rather than an utter moose likely to prod buttons at random and it takes flipping all the way through to page sixty-four to come across a general list of camera-moving controls and… well. I’m going to list them here – and I want to stress this is in the order they are given – just so you can see how finger-twistingly weird their layout is:

I have never missed the simple genius of WASD so much in my whole life. A quick check of they keys reveals relevant commands are grouped together in twos (ex: forward/back) but the overall impression is one of a programmer throwing Skittles at a keyboard and assigning functions wherever they landed.

Anyway, back to my cube and the extensive tutorial that goes with it…

Colouring the cube is quick and easy: All you have to do is select the object you want to paint (either from a list or by clicking on it directly) and manually pick a colour for each face (this is when you realise the “lighting” is faked, so you have to pick your own light/mid/dark tones). Each side’s current colour is shown in a small box on the left of the colour palette so you only need to do a maximum two clicks (select colour>select side) to fill in even the parts you can’t see – you don’t have to manipulate the camera or the cube at all. Stretching the cube out into a new shape works just as well although as I’m spoilt by modern conveniences I expected this to be a click and drag sort of operation – it’s actually all done from the menu, using on-screen arrows to tease it out into a larger rectangle or to squish it down into something smaller . It works quickly and correctly first time, although the interface always a bit fuzzy on exactly which arrow is going to stretch (or shrink) which side. Even so I’ve made a cube, coloured a cube, and fiddled around with the dimensions of a cube all within the space of ten minutes and I can’t help but gaze at my yellow rectangle with pride. I can do this. I can do more than this. I am going to MTV the heck out of this place (do click the link for an explanation, young people).

So within the same space I make a pyramid. It appears just above the rectangle, its tip disappearing off screen and my confidence vanishing with it. How on earth am I going to sort out two things and then make them fit together? I slowly wrestle this new shape into position, awkwardly squashing and shifting it around until it looks like a roof. A roof drawn by a three year old in mum’s favourite lipstick on the kitchen floor, but still a roof. From here it’s just a case of adding the finishing touches – flat and featureless doors and windows. Everything you create has proper collision against all other materials which means you might have to physically move something up and over another object to get it into position but it also makes it very easy to push these flat rectangles right up against my incredible 3D house and carefully nudge them into position without either of them clipping away into oblivion. Some quick colouring later and my house is finished, looking neither complicated nor impressive but it’s mine and I didn’t need to cry into my mousepad or spend an hour searching other people’s ancient forum posts (you know the ones – they always end with “Edit: Nvm, I solved it” AND SAY NOTHING ELSE) to get it done. 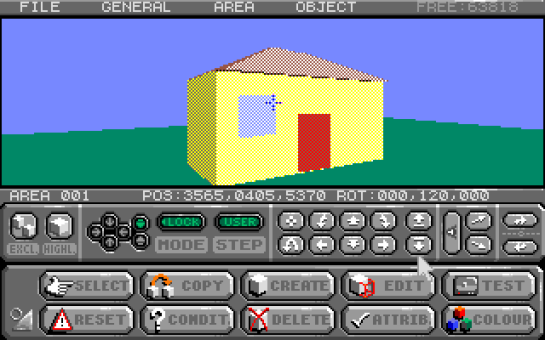 So… what’s next? With one whole project under my belt in record time I’m clearly a master at this and need to stretch my enormous natural skills with something more challenging – like an Arwing. Surely Fox McCloud’s signature ship is the perfect 3D test fodder? It’s only made up of simple shapes after all – it’s nothing more than a big long pyramid with some other triangles shoved on the sides and no fancy details – I just need make those bits and stick them all together… somehow…

I find it impossible to even get anywhere near StarFox levels of shapeliness. There are two triangles on my screen (the pyramid has an un-Arwing-y square bottom and no amount of clicking does anything to change that) and the two shall never meet. Having to virtually “move” around the same space as the object with no external overview and the lack of lighting makes telling where anything is without constantly moving around a futile task, and after much swearing I end up with two pixel-thin triangles sticking out in random directions.

I think fondly of cubes, clear my virtual workspace, and go to make another one.

No wait – let’s do pyramids. Pyramids are just cubes with a pointy end, right? This next experiment goes far more smoothly even if it does come out looking like a background from an old adventure games – the sort where you have to wait for each line to be individually created and filled before carrying on – but I kind of like it. I add a little more “detail”, some squashed pyramids that are supposed to be… sand dunes? Other buildings? Not knowing adds to the mystery of the scene – that’s what I’m telling myself anyway. I wipe the slate clean and try something else – a chair. It’s a bit of a wonky chair, but once again it came together quickly and there’s no mistaking it for anything else. Another reset. A tree this time, something like the ones found in the original Sentinel. It looks nice, but I need more. A single tree easily becomes a whole forest thanks to the kit’s ability to group shapes together (in this case, a brown rectangle with a green pyramid on top) and then copy and paste that object cluster anywhere I like. 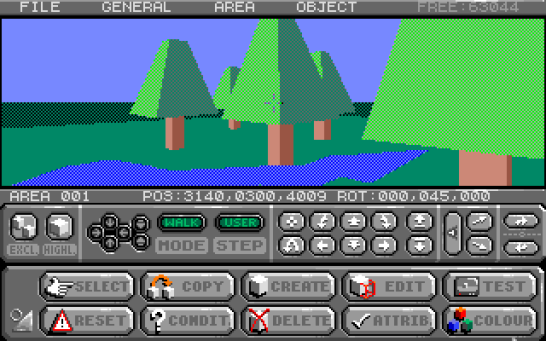 If you choose  put in the work you can create some amazing results with this program: The included example game includes a custom UI, inventory space, room switching, dialogue, health bars, and animated characters that react when you shoot them – and you know what? You see that sort of over-achievement all the damned time. From Deluxe Paint‘s Tutankhamun mask to Corpse Party‘s origins in RPG Maker software, there’s always some super-talented individual aiming for the stars while you struggle to make a save disc. What makes 3D Construction Kit feel so enticing is how quickly I can build something with it, taking a few shapes and turning them into something recognisable with no previous experience at all. My models may only look right from one fixed angle and there’s a lot of visual cheating going on but even so I came away from my session feeling happy, creatively fulfilled, and with a renewed appreciation of the extreme effort that went into making early 3D games.

There are some issues: The movement feels sloth-like even when the screen’s completely empty, not being able to manipulate cubes and pyramids by their points restricts what you can do with these ready-made shapes, and forcing all objects to have collision even when you’re in creative mode can cause some headaches but you have to remember this was all happening at home, using standard hardware to run shop-bought software that didn’t cost an arm and a leg, in the year before Virtua Racing appeared in arcades – in that context 3D Construction Kit is nothing less than an approachable miracle on a floppy disc.

[This post was 100% funded by Ko-fi donations! Thank you for helping me keep this blog fresh and weird!]