Another day, another game set in the now scarily not-so-futuristic year of 20XX. Irem’s Image Fight made its tate-orientated arcade debut back in 1988 with its first no-TV-tilting-required home counterparts arriving two years later, turning up on everything from the unstoppable NES and the wonderfully dinky PC Engine to the highest high-end Japanese computers of their day – the FM-Towns and Sharp’s X68000. That’s a phenomenally broad hardware spectrum for a single twelve month release window and also a perfect demonstration of how incredibly flexible the concept of  “arcade games at home” was at the time – the gulf between specialist PCBs and home technology was absolutely enormous, so much so that nobody seriously expected a purchasable port to do much more than generally resemble the title it was based on. It’s easy these days to look at the Saturn/PlayStation Arcade Gears: Image Fight & X-Multiply collection – a release that’s been on the “stupidly expensive” end of the retro game price scale for a long time now – the slightly rejigged arcade ROMs found in Irem Arcade Hits, or Hamster’s Arcade Archives port, and conclude that there’s no point in me spending any time with the ageing X68000 version spread across two literally floppy discs I’ve got lying around my house (no, I don’t know how that happened either) – why should anyone bother with a thirty-two year old arcade port that’s not arcade perfect?

Because it’s still an astonishing technical achievement, even if it does suffer from the odd bout of sprite flickering (this only ever happened to me when the game rolled out screen-sized ships so it always felt more oh heck here we go than anything else). Because it’s close enough to the source material that in spite of its compromises it can still be used for practise sessions before heading off for a go on the credit-devouring real thing.

But mostly people should still bother playing it because it’s still a lot of fun. 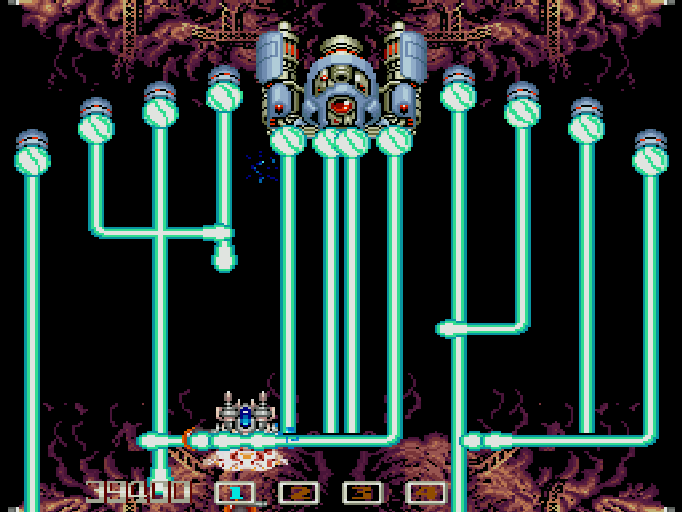 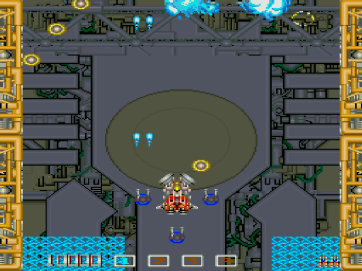 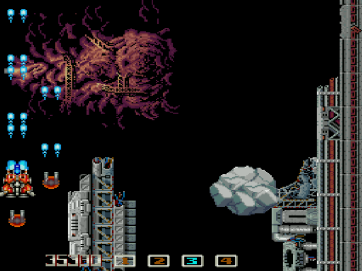 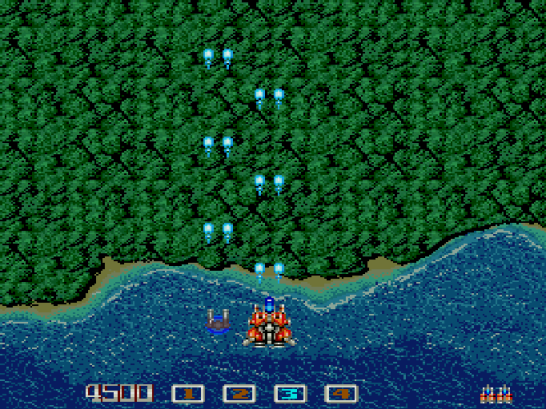 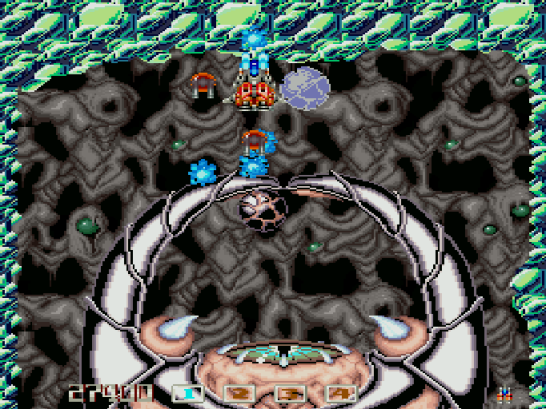 Although having said that… perhaps it’s more accurate to say “It’s still Image Fight“. This is an exacting, challenging, and very memorable shmup that demands only the very best from its players at all times and is not shy about punishing any and all mistakes the instant they happen – and they’ll happen a lot, because everything can kill you in this game – everything. There’s the usual assortment of wotsits you’d expect to try and strip you of your hard-won lives and power ups to contend with: Enemy ships. Missiles. Little wiggly alien things. Sodding lasers. Sudden high-speed bursts of fire from a mounted cannon at close range please no not aga- And if you can survive those then all that’s left to worry about are the little spinning power-up-carrying pods (touch them before you’ve cracked them open and die), the scenery (the slightest brush with anything will make your OF-1 instantly explode), and whether you’ve destroyed on average ninety percent of everything you came across to avoid being sent to an extra-tough penalty stage later on.

Yep that’s right, the first five stages of Image Fight are actually a virtual shmupping exam – I suppose when you’ve only got one shot at solving a dangerous problem on the moon it’s only sensible to be prepared – and if you don’t pass the test then you’ll have that additional stage to go through before you’re deemed experienced enough to take on the Real Fight (See? Clever title, huh?) in outer space. I expected myself to mind being subjected to such formal credit-munching testing but once I’d got through this extended opening gauntlet I could see the thinking behind it: The pass/fail system encourages you to actively engage with every single ship, turret, and weirdy alien blob headed your way no matter how big or small they may be even if it would be a lot easier and safer for you to avoid them – that’s how shmups should always play if you ask me. And although the pass requirement sounds high in reality the game isn’t designed around trying to catch you out with the sort of enemy patterns that would force you to preemptively shoot at empty patches of screen space to catch cheap-and-fast little ships before they vanish forever; I personally found it harder to access the penalty stage than to avoid it – you don’t have to play Image Fight perfectly to avoid its unusual punishment, you just have to make an honest effort. 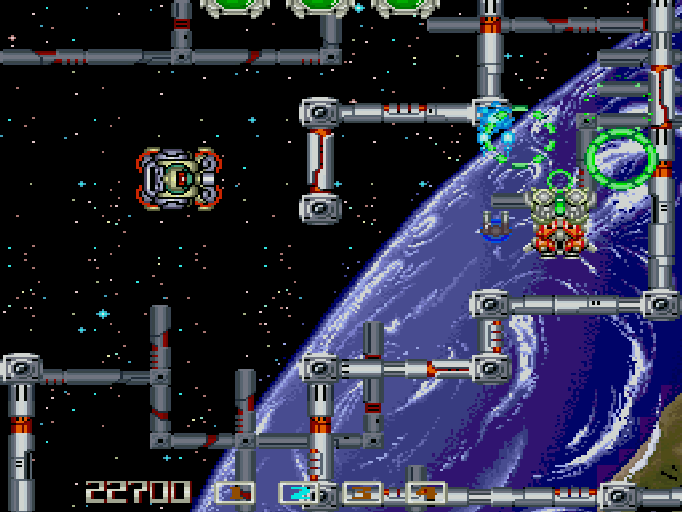 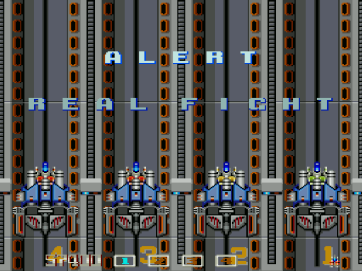 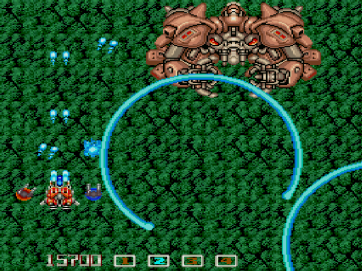 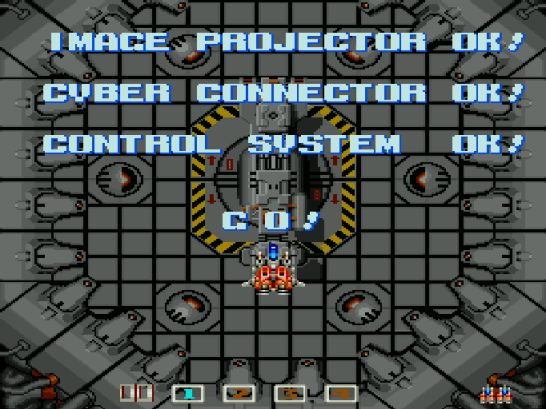 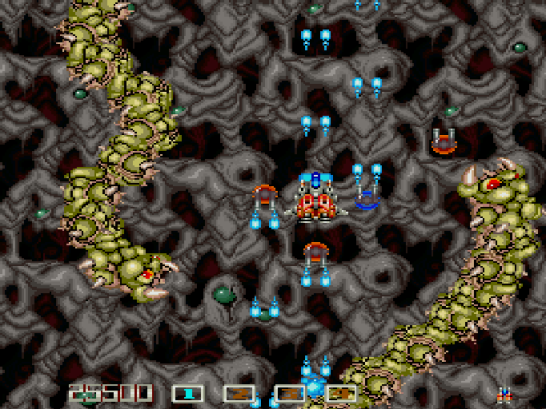 And that’s about as lenient as Image Fight ever gets because for everything else you do have to play perfectly… in short segments. This is one of those dreaded/adored shmups where losing a life returns you either to the start of a stage or to its sole checkpoint (using a continue will mercifully still restart you from the last checkpoint reached even if it does erase your score) meaning you have to learn how to make your way from one section to the next on skill alone – you can’t casually credit feed your way through to the end of this one even with the infinite supply of retries it has waiting for you to use and there are no smart bombs to help you blast your way out of trouble here. When I first began spectacularly failing at Image Fight I thought it was unfair of Irem to not include a checkpoint just before the end-of-level boss fight – trying to learn a boss’ patterns when there’s a significant and pretty intense gap between the checkpoint and the latest giant shot-spewing whatever that killed me isn’t the easiest of tasks – but after a few more deaths I understood why they’d settled on having the game work this way: It gave Irem the freedom to design more challenging battles as they never had to worry about those fresh-off-a-restart scenarios where you’ve got nothing more than a pea shooter and an unreasonable amount of hope to your name. By winding it back a bit and ensuring each post-checkpoint stretch of the level had the opportunity for players to pick up parts (these always grant the same shot type when acquired so the designers always know what you’re likely to have with you by the time the boss scrolls into view) and a few pods (these are little floaty Gradius-like “options” in decided-at-pickup fixed-forward or “fires in the opposite direction you’re moving” varieties) – you’re never forced into an unwinnable situation or expected to take on a boss without enough equipment to bring them down.

This mandatory playing and replaying of every single section until you get them right doesn’t just make the game last a lot longer than most – it shamefully took me just over a day to clear Image Fight’s first loop – it also helps you appreciate how carefully designed each stage is as well; every challenge is layered on top of the last, adding new wrinkles to previously survived problems all the time. Such careful teaching actually made the game’s second loop feel a little underwhelming after all that fun and fighting: It’s harder (as all shmup loops should be) but you don’t get that sort of kipper-across-the-face slap as the difficulty steps up a gear or any sort of wildly altered enemy layouts to throw your previous knowledge off balance. It all felt a bit odd in a game that’s made such an effort to make trouble for players on the first time through especially as it doesn’t try to compensate for this in other obvious ways: There are no new graphics, no increased pass requirements (a 100% pass challenge sounds like it’d be fun in a why-is-Kimimi-crying-again sort of way) or even just a few palette swaps – that opening seascape scrolling by under an orange sunset instead of bright day would’ve been a nice change. Still, after all the blood, sweat, and tears that went into my first loop it was a bit of a relief to discover that I wasn’t going to miss out on anything that couldn’t wait for another day beyond the humorous middle finger of an alternative ending. 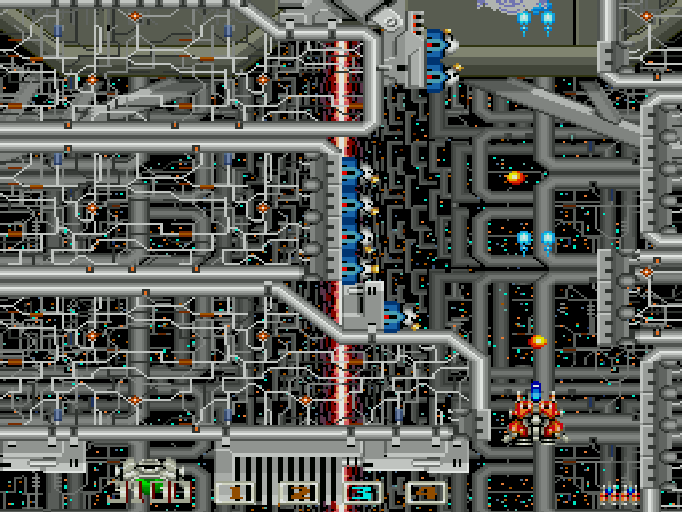 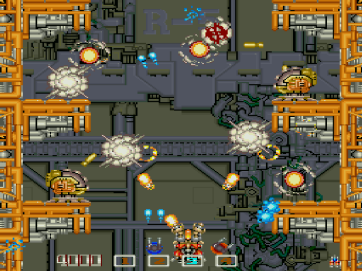 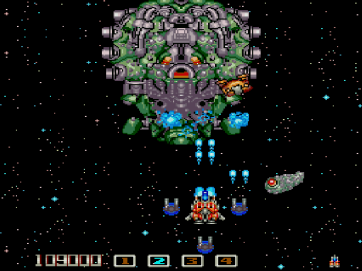 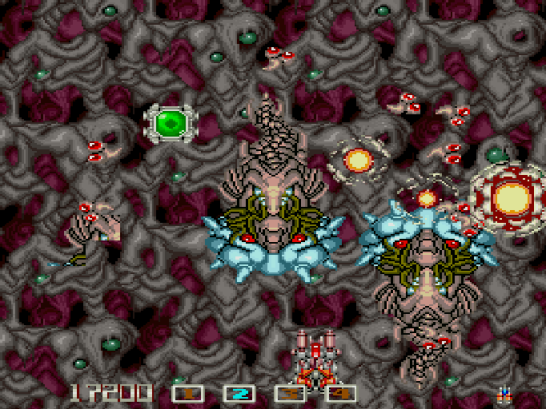 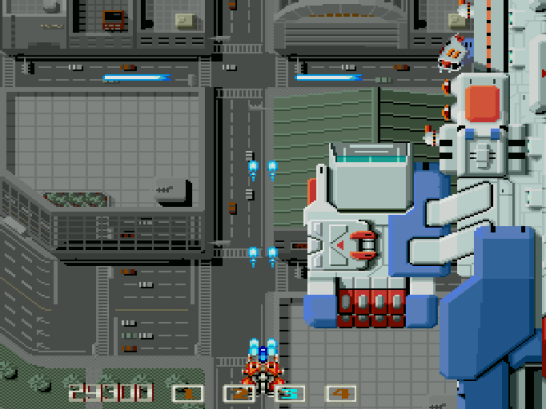 Irem did however take the time to include some other nifty little details for those able to survive long enough to notice them (or for people like me who have long given up on being any good): I love the way they use the VR environment of the first five stages as an excuse to take you through a greatest hits list of otherwise disconnected shmup locations: Image Fight’s opening level taking you over a blue sea and thick green forests before the game moves on to cityscapes and giant fortress-ships, tightly-packed mining caves with little turrets poking out of rocky outcrops, high-tech areas with robotic enemies and energy barriers, and then the obligatory bio-tech stage, all weird alien backgrounds and creepy organic monstrosities. The closing Real Fight areas aren’t neglected either – there’s the classic “planet scrolling by in the background” bit in the second section that’s been done many times in many shmups but always looks incredible when it pops up as well as the final moon base stage having panels in the background that start off marked “Level 1” and eventually make their way up to “Level 3” as if you really are weaving through layers of deadly security on your way to making your final assault on – and I quote – “A weird plant from another planet”. Your eyes are never distracted away from all of the frustrating/enjoyable death-dealing action by these little flourishes, but they’ll always be rewarded if you’ve got the time to take a quick peek away from all the threats constantly flying towards your ship.

And this bright red craft – the OF-1 Daedalus – boasts what may be one of my favourite little shmup animations ever: Changing the speed of your ship actually makes your wings visibly shift the position along the main body, making the Daedalus more or less streamlined as you flip back and forth through all four settings – isn’t that incredible? And whenever you do this a neat little backdraft will blow out of your exhausts and anything caught in the blast will take damage – it’s not enough to destroy anything more than “popcorn” fighters and little turrets but it does mean you always have a (risky) way of attacking enemies behind you (and Image Fight’s very keen on having you attacked from all angles) at all times making it a real life saver in tight spots… and a life ender a few seconds later too if you’ve forgotten which setting you’re on and crash at high speed into the nearest wall (not that I would ever do that, oh no). The only reason I know about this technique is because it’s included in the brilliantly thorough manual, a slight but info-packed little booklet that opens with plenty of background story for those who enjoy reading that sort of thing (the strength of Irem’s narratives always surprises me) – even if it is printed in headache-inducing pink ink over a too-busy starry background – and then goes on to show colour photos of every part and pod alongside proper explanations of their usage and all the other handy little things you need to know but have nobody to ask about.

It’s a tough game and sometimes maddeningly so but I can’t help but love (and hate) it for making me – really “You’re either serious about clearing this or you’re playing something else” forcing me – to get hyper-familiar with it on my very first go, learning when every surprise-from-behind ship was due to appear and exactly which power-up served me best in each stage. As Image Fight’s end sequence scrolled by I felt relieved and exhausted by it all – not the usual emotions I associate with clearing an arcade-born game of any genre, but not a feeling I’ll forget in a hurry either.