The PlayStation was home to all the games you’d expect from the leading format of the time: Glossy racing sims, more movie tie-ins than anyone could hope to keep up with, and an astonishing array of multi-disc RPGs with more FMV in them than we used to find in FMV games just one generation back. What’s often overlooked is that this almost unbelievable level of success also allowed the coolest console of the nineties to be the place otherwise impossible games called home, the mild interest of a small percentage of Sony fans translating into a far greater quantity of open wallets than blanket praise from either Nintendo or Sega’s camps could ever hope to offer.

This was the console that gave pleasantly gentle hot air balloon experiences the chance to shine.

This was the console – the only console – Harmful Park, a lavish 2D shmup by Sky Think Systems (now SkySea Games), a developer whose entire back catalogue could be accurately described as “two puzzle games”, could have been made for. Even so, raw novelty can only carry a game so far. Is Harmful Park actually any good when taken as nothing more than another horizontal cute ’em up, or does the game fall apart once you move beyond the fact it exists? 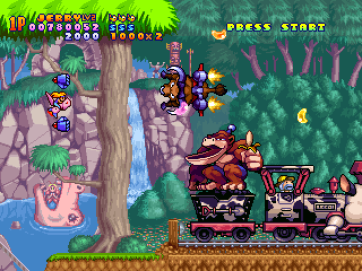 The first thing that hits you is how impressively detailed everything is: There’s not a single screen in this game, no matter brief or unimportant, that hasn’t been polished until it shines. The gorgeous fully-voiced cutscenes bookending each of the game’s six stages (or “Attractions” as they’re referred to here, in keeping with the amusement park setting) bring to mind the colourful scenes found in Detana!! TwinBee – that’s all big arcade-like stuff you’d hope to see but then there’s also the adorable visual pun of bats holding [baseball] bats, and a miniboss battle that opens with a wedding ceremony, the bride’s lover bursting through the door at the last second causing the would-be groom to burst into tears. There are so many visual flourishes hiding away in Harmful Park you may not spot some of them until a second, third, or even a fourth time through, like the little flying cowboy hats that only stop for a second to show a giggling little enemy peeking out from underneath if you go out of your way to not shoot at them when they appear or the completely unique dog-shaped tandem rotor helicopter that breaks in half when destroyed revealing two otherwise unseen characters who call out to each other from opposite sides as their aircraft goes down, both holding out a hand to the other – and we mustn’t forget the large steam train painted with a cow-print pattern either, the one that has a gigantic ape hitching a ride on the coal carriage and slapping its bottom in the player’s direction as the train choo-choos down the tracks before disappearing into a tunnel – a “tunnel” that is in fact a giant train-eating crocodile… not that you’ll ever know that unless you make a conscious effort to destroy the cunning disguise before it scrolls off the screen. The embarrassment of riches found in here so absurd I could write stage-specific lists of all the unique little things that go on and still worry I’d missed something along the way – it’s as if a 4MB RAM cart enhanced Saturn exclusive just decided it was going to run on a stock PlayStation with no compromises. 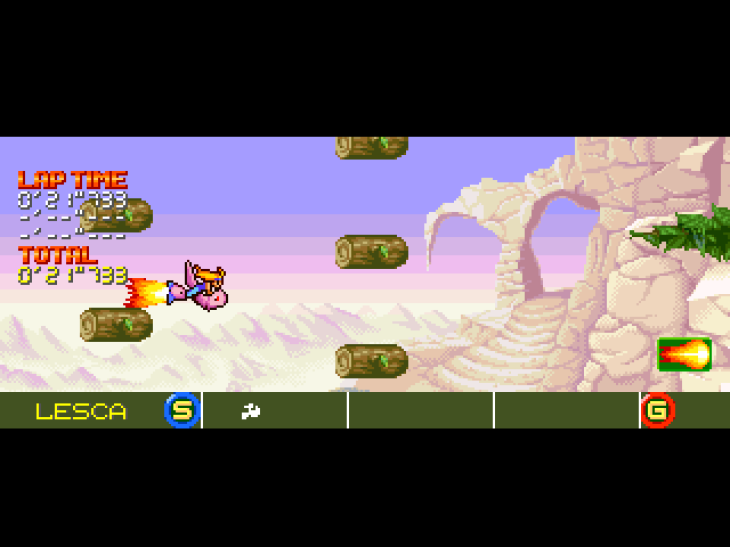 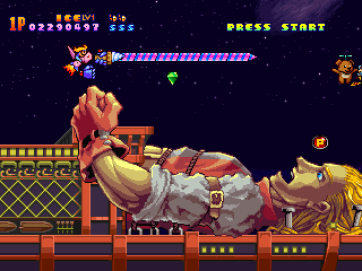 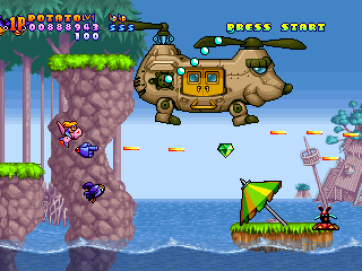 And that alone is all nice enough – it’s always great to see more beautiful pixel art on any format – but Harmful Park’s so impressive because these eye-catching graphics are merely used as decoration for a well made game. It’s an endearingly ordinary shmup, enemies generally coming in from the right as you hang around the left and blow things up while collecting the odd power up or extra bomb that floats along, a game intended to be played by anyone without any real effort or prior knowledge of the genre. This is the reason why the default difficulty level is not just called “Easy” but is actually the easiest setting available (three harder modes are available and greatly increase enemy shot frequency), why clipping the scenery causes no harm at all and spares everyone from Death By Stupid Accident, why you can throw yourself against an attraction for as long as you’ve got the patience to do so using the game’s infinite supply of level-restarting continues.

Maybe that all makes Harmful Park sounds a bit safe, a bit too “everybody gets a participation trophy”, to be worth a go. I’d say it’s balanced rather than boring, a game making a real effort to accommodate the inexperienced without wrapping them in cotton wool while still attending to the lofty expectations of those who have a CRT TV permanently sitting on its side at home. Besides, this is a game that has you flinging pies from giant robot hands at inflatable dragons – who wouldn’t want to blast their way through something like that at least once?

Aside from those comedy pies (power them up enough and they’ll have cherries on top) your remaining offensive options are literal finger guns that behave as your standard shot: they’re fast, weak, and with enough upgrades they’ll turn into a very helpful spread shot. Then there’s jelly beans: these are large and slow but also have a useful homing property. Ice creams are your laser fire: long, narrow, and powerful. Your currently selected weapon (you always have all four available and can switch between them at will) also determines the behaviour of your small pool of bombs, unleash one when you’re firing finger guns and an enormous sweet potato will explode on-screen but if you press the same button with ice creams equipped a large glass bowl filled with ice cream sundaes will fire a wide laser straight ahead. One isn’t destructive at all – activate a bomb with the jelly beans equipped and your character becomes encased in a translucent protective jelly, keeping them safe for a few shots. 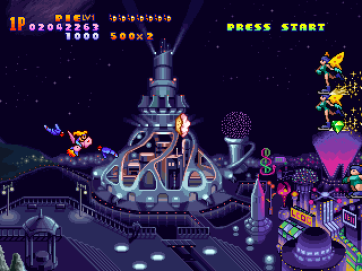 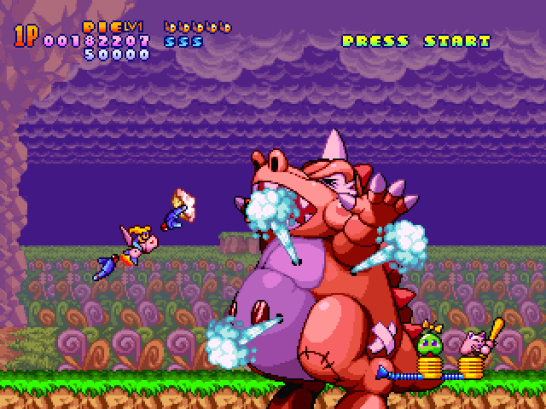 Once you’ve mastered surviving Harmful Park has the depth to allow you to move on to scoring, points multiplier notices popping out of defeated enemies if you can keep the destructive pace up and the value of frequently scattered green gems increasing dramatically if you can scoop them all up in quick succession too. Once a level’s been cleared you’re awarded additional bonus points for the number of bombs remaining and the total quantity of green gems collected as well as the percentage of enemies shot down, and that means it’s not enough to carefully pick the safest route through the incoming bullets, you’ve got to try and take down as many of them as possible if you want the very best scores. If that’s still not enough there’s a separate score attack mode waiting for you on the main menu and in an unexpected twist this isn’t the regular game with the ability to continue stripped away but an entirely unique level created purely for the purpose of challenging those eager to test themselves, the aim being to see how many points you can squeeze out of the specially designed enemy arrangement within.

And normally that’d be the end of your shmupping options – you’ve got the standard game, the ability to rope in a second player for the standard game, an additional score attack mode on top – what else does a shmup need? Well… shmups need unrelated minigames, apparently.

First up is Punch Ball, a Harmful Park variant of good old-fashioned Pong for two human players (and this one does need two players) to while away the time with – and if that doesn’t sound too exciting there’s always the chance to run speed laps of Sky Circuit’s specially-built racetracks. or play some Tank Battle, a four player (AI opponents will fill in the gaps) free-for-all in screen-sized arenas pitting trundling little tanks with reflective laser shots against each other in one of the cutest deathmatches you ever did see. These may be simple little distractions – I don’t think anyone should seriously bother digging out a multitap to play Tank Battle with three other people – but that is exactly what a minigame is supposed to be and it says a lot about the talent that must have been oozing out of Harmful Park’s staff at the time if crafting six shmup stages filled with the impossible still wasn’t enough to satisfy the creative desires of the team.

If you’d like to try this out for yourself and maybe even rope in a friend for some fun low-stakes shmupping along the way Japan’s digital PlayStation store once again spares anyone from paying the now astronomical second hand prices a physical copy commands so long as you have a PlayStation 3, PSP, or Vita to play the downloaded game on.

[Your Ko-fi support made this page exist! Thank you!]

9 thoughts on “A fun day out for the whole family”