After a look at one largely disastrous attempt to bring an unexpected genre to SNK’s action-leaning hardware, I thought it was only fair to balance that out with a more positive example along the same sort of lines: Densetsu no Ogre Battle Gaiden: Zenobia no Ouji, is a side story in Quest’s famous Ogre Battle series and a Neo Geo Pocket Color exclusive focussing on the titular prince, Tristan. Much like the technically impressive Barry ’em up Resident Evil Gaiden for Nintendo’s Game Boy Color this is another game trying to capture the essence of a console series on handheld hardware that shouldn’t be able to get anywhere near the titles it’s based on, and yet it does so anyway – lush green plains shift to dusky oranges before your eyes, elegantly illustrated tarot cards play an important role in just about every aspect of the game, and little units representing everything from monstrous octopi to freshly-recruited fighters – there’s no need to go hunting for broad similarities or vague inspirations between this and the SNES title Ogre Battle: The March of the Black Queen it’s based on because they’re crystal clear from the moment you start playing. 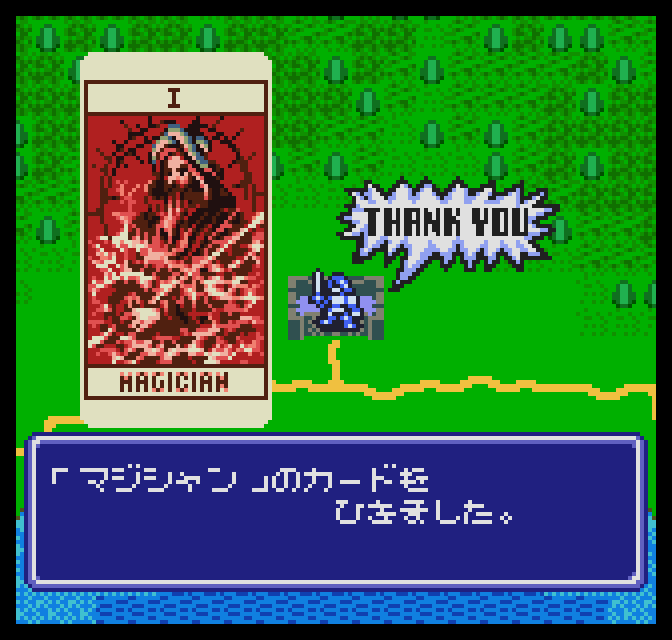 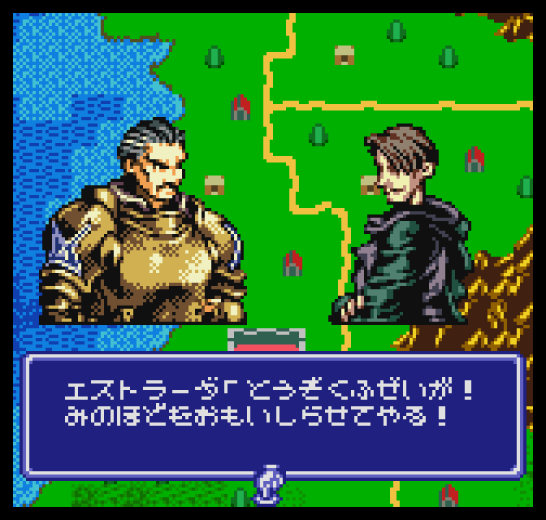 In fact they’re so clear these incredible renditions of Akihiko Yoshida’s screen-spanning tarot cards and brilliant character designs may even feel a little disappointing as so very many images are incredibly close to their SNES originals: It’s well worth remembering in these “Yeah but I’ve seen these all before” moments the little handheld this pixels are displayed on, the one that barely registered as a blip in portable gaming even during its most popular moments and was designed to compete against the technical modesty of the Game Boy Color, has managed to accurately mimic a 16-bit console famed for hosting some of the most beautiful pixel art the hobby has ever seen. This quiet splendour doesn’t just apply to static images either, as all the animated battle sprites – and yes I am aware of what I’m about to say – honestly wouldn’t look out of place on their console counterpart. Wizards throw around tornados while dragons breath fire and soldiers slash away with their swords, the action only pausing for capital-D Death to be summoned via the power of tarot and unleash a battlefield-wide attack as though they’ve all forgotten the hardware they’re running on. And should you tire of seeing monsters lash out with their tails or archers loose their arrows you can speed up these semi-automated conflicts so they only briefly display the basics (as interrupting the action to deploy tarot card effects and change tactics is part of the core gameplay, you can’t eliminate these scenes entirely). Complimenting this visual feast are a full set of clear speech samples, covering everything from “Liberation!” followed by a crowd cheering to “Fight it out!” before another epic clash, as well as “Thank you!”, “Lucky!”, and all the familiar rest. It’s not the only game on the format to contain voice clips, but it’s always exciting when a Neo Geo Pocket game surprises you like that. 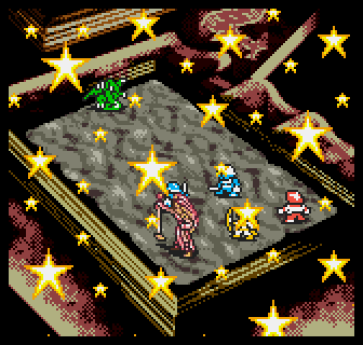 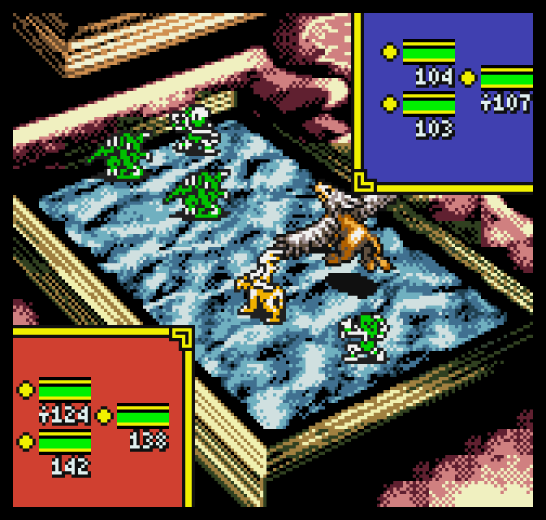 The gameplay adopts a similar philosophy, turning in a simpler, but not simplistic, take on Ogre Battle’s superb tactical formula, the concessions only made where necessary to keep everything running smoothly on SNK’s battery-powered handheld rather than out of a fear portable players wouldn’t be able to grasp the complexity of the real thing. So although maps here may be smaller with fewer moving pieces than their console equivalents, what has survived the transition is just as much “Ogre Battle” as anything else bearing the series’ name, even going so far as to retain multiple endings, extra stages, and other fun surprises – not on the scale or level of sophistication as the rest of the series, but they’re all very good reasons to keep coming back once you’ve reached the end as well as giving your own decisions and successes some impact on the virtual landscape, however small that may be.

Although this is all assuming you ever get that far in the first place: I’ve discovered I’m exactly as bad at this as I am any other game in the series, and so before long little piles of leaderless bones were scurrying back to our home base with their defeated tails between their legs. There’s no doubt Ogre Battle Gaiden’s tough, but that difficulty never stems from a lack of information: A quick press of the Option button at pretty much any time will tell you whatever the currently selected text means, whether that’s major arcana spell effects or even something as simple as the Run icon in battle, and in the early stages optional explanations of new mechanics are offered whenever they’re encountered, even if they may seem obvious to Ogre Battle veterans. In addition to all this very welcome in-game help is the incredibly useful manual, a colourful tiny tome happy to dish out page after page of annotated screenshots and useful tables of spells and items, many of which are decorated with a range of serious to cute illustrations that I’ve personally not seen elsewhere. Need to know exactly what the Luck stat does or what attack a Witch performs when on the back row? This little book has everything you need. 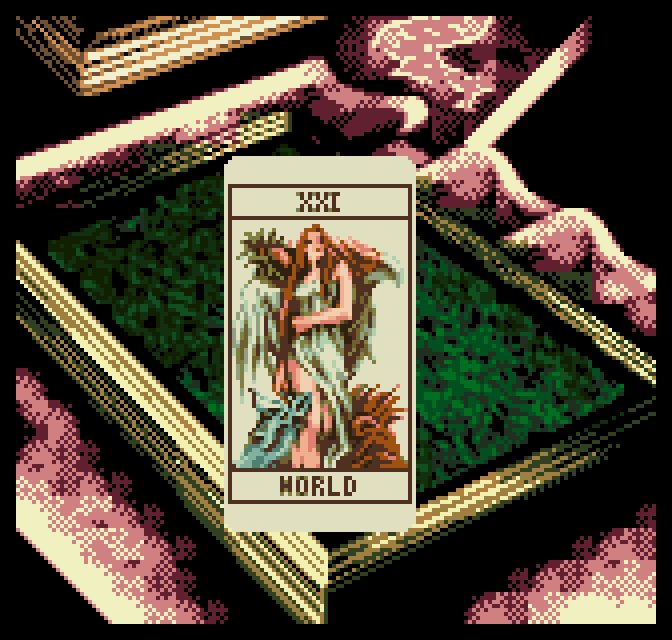 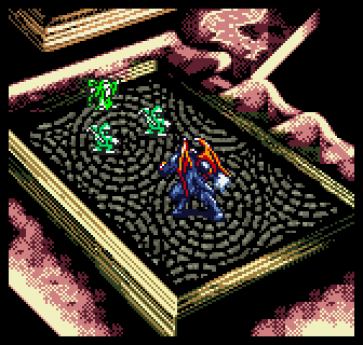 Being officially named as a side story tends to imply a lesser experience to the main event (Ninja Gaiden being the most obvious, if renamed, exception to that rule), and while I wouldn’t claim Tristan’s adventure has the same level of importance as Tactics Ogre or any of the other dramatic stories taking place within this setting Ogre Battle Gaiden definitely feels like it fits comfortably within this magical world – even I can recognise some of the people, place names and character classes used here – and nobody could honestly claim it wasn’t doing a great job of keeping up with bigger and better known entries in the series designed for more powerful hardware and programmed by larger teams with more generous budgets. Think of this as the fantasy equivalent of Konami’s Metal Gear Solid: Ghost Babel: It’s not in any danger of outdoing the game it’s based on, but it’s no less true to the spirit of the series in tone or gameplay because of its perceived shortcomings.

Real time strategy shouldn’t work on consoles, never mind relatively underpowered handhelds… yet here’s this mostly-forgotten spinoff acting like it received the memo, read it through – and then decided to tear it to pieces.

8 thoughts on “A kind of magic”