Much has been made of Mojib-Ribbon‘s calligraphy theme in English-speaking circles over the years, with some persistent claims this renders it utterly impenetrable to those who can’t fluently read Japanese. This, at least on a mechanical level, is not true. The game may be calligraphy themed, but the fact is Capcom’s bark ’em up Okami is more concerned with the quality of your brushwork than Mojib-Ribbon is – this is not a complaint or a design flaw in NaNaOn-Sha’s title, but it is a general misconception that needs dispelling sooner rather than later. You’re here to rap, the game relying on your understanding of the words inked out below Mojibri’s feet exactly as much as PaRappa the Rapper expects you to be able to kick, punch (it’s all in the mind), Um Jammer Lammy expects you to be able to play the guitar, and Vib Ribbon expects you to be able to fulfil the role of a wireframe shape-hopping bunny who can also turn into a worm – which is to say, not at all.

The aim of each stage is to guide your character into turning the circle of clouds scrolling below their feet into the lyrics of the rap using their brush and the limited supply of ink available to them. To write you need to do nothing more than hold the right analogue stick down at the beginning of a section and then release it at the end. To write well you’ll need to briefly flick the stick upwards to load your brush with ink before holding down, and then release it at exactly the right moment to avoid finishing on a blotchy mess. Release the brush too early and the entire segment reverts to fluffy clouds as if you’d never written anything at all. Hold up too early or for too long and you overload the brush, the words below correct but the ink bleeding everywhere and the text indistinct; press down too late and your character trips, losing some of the ink from their reserves and missing the segment entirely until it scrolls around again. So in reality it’s very much rhythm-action business as usual for Mojib-Ribbon – you’re still trying to mimic the pace and “bounce” of a song’s words, it’s just represented in a new way. 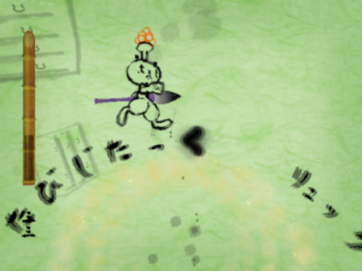 As lines repeat on a loop until you’ve filled in every single word the rap never runs off into the distance without any input from you, but the downside to that is lines repeat on a loop until you’ve filled in every single word, meaning unless you play every line perfectly first time you won’t get to hear the natural flow and rhythm of the lyrics – oh and it also means stages last as long as it takes you to clear them (or until you’ve tripped up enough to completely exhaust your ink supply) rather than as long as the text was supposed to last. It’s not an easy or forgiving game either, and there’s nothing you can do about that other than try to be less rubbish at a stage than you were last time – by rap twelve (of eighteen) I felt I’d reached the limit of my skills and my patience and I hadn’t even unlocked the third and final playable character, Osorezan1999, yet. The end result for most people is Mojib-Ribbon’s charming lyrical adventures – the ones they can clear, that is – will sound a lot like listening to a YouTube’d song streaming over a poor internet connection, or a favourite record played via a dirty jump-prone needle.

Clearing track nine unlocks a text editor, enabling you to go back and change the words of a track into whatever you’d prefer and then play them over the level’s music thanks to the clever text-to-speech generator used throughout the game. The editor gives you almost development-tool levels of control but unfortunately all this really achieves is to make an already challenging game feel intimidating and overwhelming, as if the vast difference between casual kitchen sink karaoke and actual songwriting suddenly been made very clear. Needless to say inputting a rap’s worth of text using a PlayStation 2 controller is a lot like being invited to type out Hamlet on your phone wearing mittens, so you’ll be pleased to learn USB keyboards are supported – which “only” leaves you with the usual issues of content creation, rhythm, tempo, and everything else that goes into creating quality music. The note editor unlocked later is very much along the same lines: It’s fully featured, highly customisable… and not really what anyone’s here for. Like the logo editors found in certain games allowing you to create your own emblem, there’ll be two people on the planet who have the time, skill, and patience to spend days creating incredible work with the tools available here, and the rest of us mere mortals will have a little go, achieve nothing, then swiftly move on. The one definitively bit of good news here is that those two people at least got to share their creativity with other Mojib-Ribbon owning people online thanks to the game’s ability to upload/download user-made text and messages. The game has more pre-made content than its predecessor Vib Ribbon ever did, resulting in a richer, longer and more tonally consistent experience out of the box but Mojib-Ribbon doesn’t stick the landing quite as convincingly as NanaOn-Sha’s earlier musical titles do: The graphical style, beautiful as it is, shows us a more abstract and less well defined world which makes connecting to the entertaining story threaded through the stages more difficult than it should be and the lyrics struggle to pick up the slack, not because they’re in Japanese but because you have to reveal them yourself in a string of demanding reaction-based segments. On a first time through they’re more than likely going to be heard in out of sequence chunks, and if you do get them all right first time you’ll have been concentrating so hard on the timing you’ll find there’s no mental bandwidth left to soak in the fun you’ve just inked out below your character’s feet anyway. Take any one portion of Mojib-Ribbon and you’ll find strong examples of daring artistic vision and wildly inventive ideas, a game that encourages personal creativity and customisation – but it’s hard to ignore the fact these fantastic individual pieces somehow don’t quite come together to form a cohesive whole.

5 thoughts on “Rapping it up”