I’ve loved Mad Stalker from the moment I stumbled upon the X68000 original while browsing Project EGG’s wonderful selection of games, and snapping up the otherwise unpalatably expensive PlayStation remake through Japan’s PlayStation Store for about the price of a large coffee only made me adore the game even more (do grab that digital offering right now if you can, because it might not be around for much longer). So when the cancelled-at-the-time Mega Drive port was not only unearthed but officially finished and then released in physical form – box, manual, and all – by Columbus Circle in 2020 I…

I actually cheered from the sidelines for a very long time because even on preorder and shipped straight from Japan it wasn’t what anyone could consider a cheap purchase, and knowing it was made from the patched-up remnants of twenty-seven year old code didn’t really get my order finger tingling. Why would it? Sometimes games are cancelled because they’re just not working out the way they were supposed to, and modern retro releases are an unpredictable jumble of everything from magical new-old experiences to almost predatory “limited” editions of 16-bit games that are still affordable and easy to buy second hand.

This Mega Drive version of Mad Stalker is thankfully one of the good ones.

It’s an all-new (old) port, with everything from colour palettes to background details remade specifically for the host hardware’s benefit: This is not the X68000 original hastily sanded down into Sega-compatible chunks or the slightly lesser FM-Towns port shoved onto a cart, nor is it Kogado’s exceptionally disappointing PC Engine release with the cutscenes lopped off. They haven’t made the mistake of trying to “upgrade” the game to mimic the later and very different PlayStation remake either or introduce any anachronistic modern comforts: This looks and plays exactly like a Mega Drive game from the distant past that is 199X – and in Mad Stalker’s case that means you get to play a fast-paced single plane side-scrolling beat ’em up with some pleasantly crunchy sound effects and really very well done pixel art. 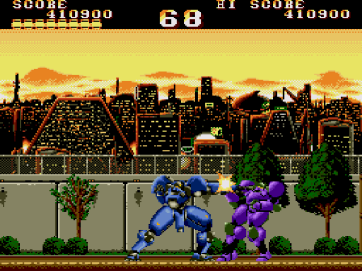 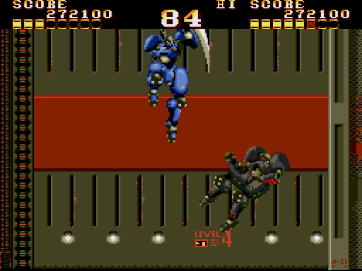 Hold on – single plane? Think of the most popular mainstream examples of the beat ’em up genre and names like Streets of Rage, Golden Axe, Final Fight, Double Dragon, Teenage Mutant Ninja Turtles, and everything in the Capcom Beat Em Up Bundle will more than likely spring to mind. How many of those classics take place on a flat horizontal surface? None of them. Looking further afield your top-quality single plane content amounts to The Ninja Warriors, Genocide 2 (X68k/FM-Towns versions only), PlayStation expensive ’em up Panzer Bandit, and… Oh! And Mad Stalker.

It’s true to say the lack of depth in the field means you don’t really get that sense of being swarmed by your opponents the way you do in the better-known titles mentioned above but what you’re given instead is a stunning amount of control, your light and heavy blows (there’s a button dedicated to each) changing their animations and their attack properties depending on whether the d-pad’s neutral or pushed forward: A standing heavy attack produces an uppercut motion, but if you press the same button and forwards simultaneously and your mech, the fantastically named Hound Dog, will perform a face-high slash instead. The same dynamic alterations hold true for your aerial moves too, with only crouching attacks offering no d-pad based variation – but even then their presence alone is more than many games of this genre ever manage to include at all, and the two low moves you have are genuinely useful.

Special moves are also available and performed using one one three simple motions: down, down, attack; forward, forward, attack; and down, forward, attack – a rising slash, dashing slash, and a single shot from a gigantic mech-pistol respectively. Just like the Hound Dog’s regular moves the behaviour of these fancier assaults can be modified, this time depending on whether you use the light or hard attack button to execute them (as expected, the difference comes down to fast/short/weak and slow/far/strong). In yet another departure from genre standards these cost no health or anything else to perform as they’re designed to be used as often as you need to use them – see them as another tactical string to your offensive bow rather than something left alone until you’re absolutely desperate. So thanks to the incredible range of options available to you a completely normal assault can see you using a dashing slash to safely close the distance, swiftly followed up with a flurry of high and low attacks or even a throw (aerial throws are also possible, and always a real pleasure to pull off) – but be careful when you’re in that close, because there’s nothing to stop them from doing any of these things to you either.

We’re not done yet! I’ve saved the best move for last: Mad Stalker allows you and just about everyone else you encounter to block. Just press A and B together any time you’re standing or crouching (just like “proper” fighting games a high guard won’t keep you safe from a low attack) to raise an invincible arm in front of Hound Dog’s metallic face – you can do this even when there’s not a single enemy on the screen! This is a huge deal. By including blocking as a conscious player-activated decision you can choose exactly when to make yourself vulnerable and go on the offensive, and as almost every enemy can do it too you have to mix up your own attacks as well – a quick low-power jab to open them up, an unexpected low sweep – instead of mindlessly jump-kicking an army’s worth of mechs into oblivion.

All of these moves flow together flawlessly; Mad Stalker playing more like a high speed fighting game, a constant conveyor belt of epic encounters with worthy foes, than a flattened version of Armored Warriors. Even the smaller knee-high enemies (who are also a great reminder of just how abnormally large your own mech is) are capable of causing serious damage or at least doing enough to interrupt your assault on a more formidable opponent, their presence forcing a real change in tactics rather than showing up as part of a joyless fly-swatting exercise. Best of all the game’s not something that can only be appreciated for its not-so-hidden depths either: Mad Stalker wants to be as thrilling as it is mechanically outstanding, and that’s why at the beginning of the fourth stage the entire city gets reduced to rubble in a cutscene, you are made to fight through the debris, and after that you hop on board a sci-fi police aircraft and take off into the skies to finish the job once and for all. This is why the final boss battle is against the Hound Dog’s evil counterpart – fought but never quite defeated several times over the course of the game – on top of the aerial battleship that caused this destruction, explosions shaking the screen all the while. Giant robots with guns and swords should be exciting, and Mad Stalker never gets so caught up in being clever it stops being fun.

If I had to rank the non-remade Mad Stalkers against each other (the PlayStation remake is different – not inherently better – enough to not be directly comparable), and it’d probably be disappointing if I didn’t, then in all honesty the X68000 version’s still the best – but only by a whisker. It’s this Mega Drive version with some (lovely) graphical sprinkles on top, not a vastly superior or expanded experience that drastically differs from the game on this Sega-compatible cartridge in some fundamental way. As it stands this new 16-bit port is an excellent side-scrolling beat ’em up in its own right whether you’re already a fan of the genre/console/era or not, a game that justifies its existence on its quality alone rather than the sheer novelty of being a new-retro game, and at the time of writing is as close to affordable and available as any physical version of the game’s been in a very long time (it’s still not what I’d actually consider affordable mind you).

[Thank you for your support! Without your kind ko-fi tips this post wouldn’t have been possible!]

9 thoughts on “Better late than never”