Before we get stuck into this game’s future it’s worth taking a quick look at its past: Cotton: Fantastic Night Dreams was an arcade game first, Success‘ success followed by home ports to the PC Engine, PlayStation, Neo Geo Pocket Color as well as an even-better-than-the-real-thing semi-remake for Sharp’s powerful X68000 home computer. After that various sequels and side games of differing quality would appear at home and in arcades over the years, and they all without exception ended up regularly selling for ridiculous amounts of money on the second hand market.

With that in mind Cotton Reboot! is already a safe purchase in either its limited or standard edition forms even if you have only the mildest interest in the game. Even on import, with all the shipping, taxes, and inflated prices that involves, it’s still much cheaper than buying the original X68000 game (included as part of this set) alone, the recent official reprint of the X68000 game alone, and at the time of writing getting a brand new limited edition of Reboot! shipped via express airmail from Japan costs less than an A2 poster advertising the original game available on a certain online auction site. While nothing is ever guaranteed, and perhaps nothing more so than the fickle fluctuations of second hand game prices, if Reboot! didn’t also end up being vastly more expensive to buy used in a few years time than it currently costs new it’d be the first Cotton game on any format to dodge that unfortunate curse. 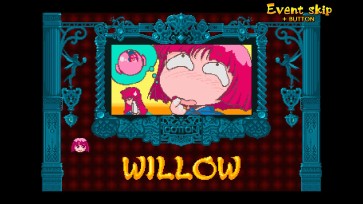 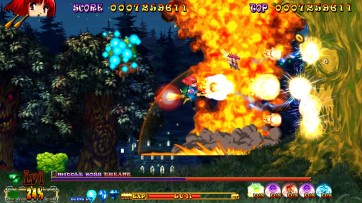 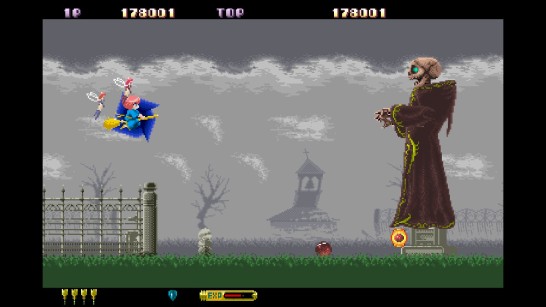 But what about if you’re just looking for a fun new cute ’em up to play, pricing trends be damned?

While this seems to be the usual remake scenario – one very old game bundled together with an optional (and very well done) graphical makeover – it’s more accurate to consider this as two separate games in one handy package as just about every major feature in Reboot! – the way crystals behave, magic attacks, scoring – has been heavily reworked into something drastically distinct from the same mechanics found in the original game.

An easy difference to spot is the way crystals now keep floating in place rather than dropping to the floor if left alone: shooting them still cycles through various colours, granting shot-power-increasing XP boosts and access to magical spells (two new ones on top of the original pair), but now there’s also a new dark crystal that when reached stays that colour, granting a massive score bonus (this can be chained with others) if collected. When crystals are shot they also increase Cotton’s brand-new “Fever” gauge (there are five possible levels of “Fever”, each one filling the screen with juicy points multipliers if activated at the right time), as well as creating a very helpful “split shot” at the first point of impact, causing a stream of green bullets to shoot out in a “V” formation (well, more of a “<” really). As you can imagine the increased graphical mayhem caused by all of these fancy modern special effects combined with a screen full of points bonuses and crystals can make keeping track of Cotton herself (the Willow-obsessed witch) and Silk (the fairy) on the screen a bit tricky when things get busy, which is why you can now see their tiny hitbox at all times, represented by a cute little heart. Further general assistance comes from Arrange Mode’s new design philosophy – the game wants the hardest thing you can do to be getting a new high score rather than seeing the end credits, which leads to the game being on the whole just that little bit more forgiving than the title it’s based on.

Tweaking the game to your liking is also easier than you may expect thanks to every option and setting being written in perfectly understandable English – bar the main menu, which I’m going to helpfully translate for you now:

There is however not a great deal to tweak. The usual lives and difficulty select are available (and the game does warn you if you mess with a setting that makes you ineligible for the online rankings), and the controls are fully customisable – want shot alone on a shoulder button of your choice? Go for it. But that’s about it. The most recent patch removes English as a language option for the game’s humorous cutscenes (and also for the basic-but-helpful digital manual), presumably to avoid cannibalising sales of the upcoming “Strictly Limited” release, leaving players of this Japanese version with the ability to switch between Japanese, Traditional Chinese, Simplified Chinese, and Korean. 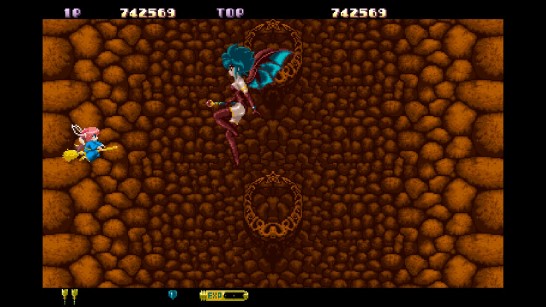 The X68000 mode – and I’ll be honest, this is the mode I bought it for – feels like it’s more of an added bonus than on equal standing with the Reboot!. It’s functional and without a doubt the most affordable and easy way to buy and play that specific version of Cotton in 2021 by a long shot, but it does however lack many of what are considered in this age and on any modern format to be basic retro-related features. For example in the current v1.2 there are no screen options at all, you simply have to take the display exactly as it already is – and what it is doesn’t seem to be an absolutely pixel perfect recreation (or 4:3 stretched equivalent) of the original either. It’s odd because pixels are well defined and crisp on the Switch’s screen, and in play nothing appears to be sloppily squished, stretched, or smeared, but when I tried to overlay a Switch screenshot on top of the same image from the original I couldn’t quite get the two to match up even with any amount of transforming or wiggling (hey, nobody can say I’m not thorough!), and it didn’t appear to be a case of them extending the sides of the screen to show more either. Still, I suppose if I have to go to such lengths to confirm there’s something off, and then can’t even definitively say what’s off after all that fiddling, then in reality there can’t be a great deal wrong – for most people, most of the time, this mode looks like a great shmup from 1993… it’s just not a true mirror of the original X68000 experience (which I really shouldn’t have sold all those years ago…). There are a few other oddities too: The original cutscene fonts have been replaced with out-of-place modern high resolution text (even when playing in Japanese), and the control customisation mid-game just doesn’t work unless before you play you select the “Arrange” option in the control menu (only accessible from the X68000 version’s start screen). Neither of these issues are a disaster (and I’ll be the first to admit the new font is much easier to read), but when the mode touts itself as X68000 mode, not retro mode or classic mode, you’d expect it to hew much more closely to the experience it’s claiming to represent. 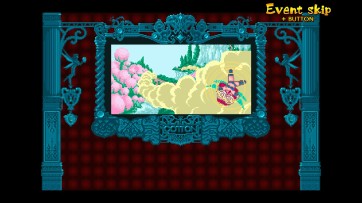 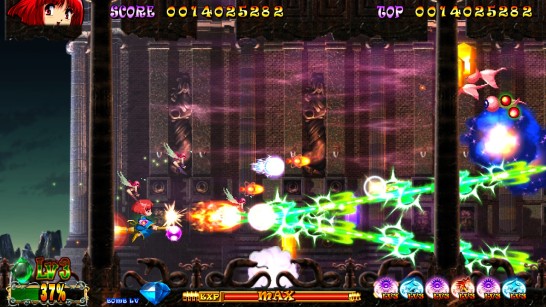 The limited edition contents do, for once, feel worth the asking price even we ignore the Cotton series’ unfortunate habit of skyrocketing in value as soon as possible. The packaging itself feels like you’re opening something special, the outer slipcase giving way to an ornately decorated wood-effect cardboard “crate” with everything neatly and securely tucked away inside. The first thing you see after lifting the lid is the game itself (completely indistinguishable from the standard edition) and although it sounds like such a small non-detail I really appreciated that, because it means the main item in this extravagant set, the one thing they wanted you to get your hands on first, was still the game. The soundtrack CD is a full album containing both the X68000 and new arranged soundtracks in full professional packaging rather than a meagre “sampler” shoved in a cardboard sleeve, and the reproduced arcade materials are, bar their updated copyright text and the direction of the sticky tape on the bottom, accurate to the originals (this includes the thickness of the card used too). Perhaps most interesting of all is the “Special Guide Book”, which includes extremely detailed breakdowns of all of Arrange Mode’s new scoring mechanics, complete level maps, enemy HP levels/point values, tables for just about everything in the new mode that can be tabled, and even scattered pieces of the updated pixel art as well, finishing on extensive multi-page interviews with key members of staff. Its thoroughness (all that’s missing is a segment on the final boss) is as surprising as it is disappointing – access to this information would help a lot of people not only play better but also understand how much more there is to the new mode than prettier explosions and enormous multiplier icons, and it really shouldn’t be locked away in the most expensive version of the game (and only written in Japanese).

Underneath that mountain of treasure is the game’s teacup, a traditional Cotton bonus item lusted after by many, owned by few, and once the mark of a very special sort of shmup fan rather than someone like me who prodded a few buttons over on amazon.jp and waited for a knock at the door. It’s a thick-walled ceramic cup with an attractive print on one side and 寿 written on the other, and still feels like a quality item even though this particular version is readily available and by Cotton’s usual standards, mass produced.

In short Cotton Reboot! isn’t quite the flawless collection I was hoping for as it lacks many of the retro-related features and often painstaking accuracy Hamster’s Arcade Archives series and M2’s extraordinary efforts have made it look so easy to include as standard (reminder: they aren’t), but when taken as a whole this is a formidable, entertaining, and highly recommended package that’s as easy and enjoyable to play for half an hour as it is to dedicate months of your free time to.