I really wasn’t expecting the overlooked and often negatively reviewed Dark Messiah, known in PAL regions as Hellnight, a game I painfully remember passing on for all of five pounds, fifteen years ago (complete UK copies now seem to be worth at least ninety), to be as close in spirit as it is to Warp’s excellent sci-fi horror tale Enemy Zero. There’s the prerendered rooms (budget consciously FMV-lite here) connected by free-roaming 3D labyrinths, the stalker enemy detected primarily by sound, and the (mostly) silent protagonist who isn’t all that they appear to be, even though they don’t know it themselves.

Close in spirit, but not a mindless copy. Although many superficial similarities can be found between this Atlus-published 1998 PlayStation exclusive and Kenji Eno’s 1996 Saturn/PC title, Dark Messiah is far more than a grimy industrial makeover of somebody else’s work. 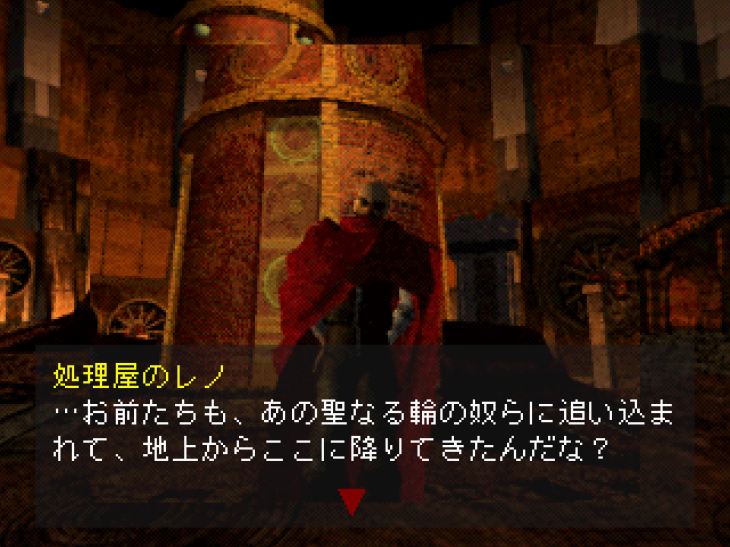 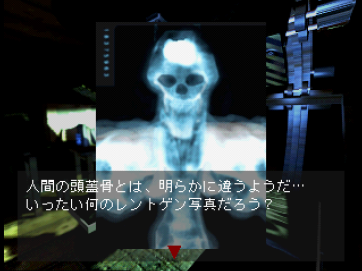 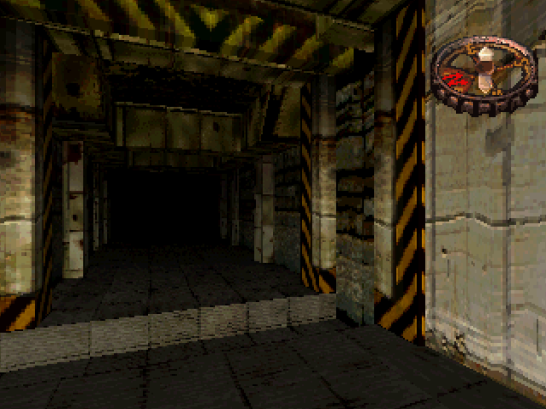 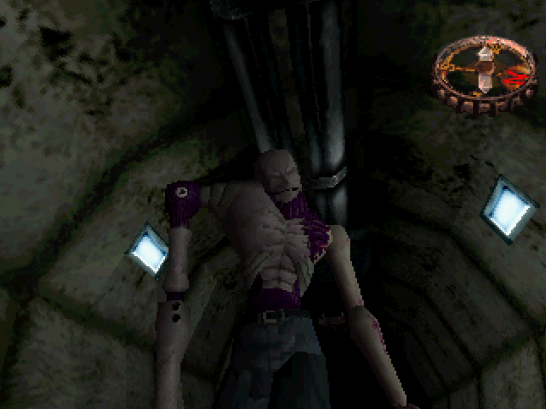 The mystery of the Tokyo Mesh – a forgotten secret underworld festering beneath the streets of modern-day Tokyo – Dark Messiah has you attempt to survive through is as broad as it is deep, the events you encounter as you plunge ever further into the darkness changing significantly depending on who you didn’t or didn’t speak to, where you went first, and even the person you’re currently partnered with. There are five characters who can tag along with you, each with their own interactions with perhaps otherwise silent rooms or objects, their own events along the way, and their own secrets. All bar your first companion, Naomi, a girl who just happened to be on the same train you were on when the monster attacked and started to kill everyone, is optional and the others will only join you (their choice) if your current partner’s died. Yep, it’s true – if the monster prowling the 3D areas of the game catches up with you – and it is very fast when it sees you – it’ll always kill your partner first, and then if you’re alone kill you (resulting in a game over and a trip back to the title screen). Your ally is never equipped with “plot armour”, never safe from harm, and if the monster doesn’t get them then maybe they’ll be killed by another NPC nursing a personal grudge or kidnapped by robe-wearing cultists instead. In one instance one of your partners may even kill you if you dismiss their warnings – maybe it’s not such a shame if the murderer haunted by the mewling of a kitten they killed as a child dies to the monster after all.

The good news is everyone you team up with has some form of defence against this invincible predator: Naomi can detect when it’s near, it’s location showing up on the full map of the area when it’s close by (you can bring up the map at any time from the moment you begin the game – there’s even a permanent on-screen compass too). Everyone else has some form of ranged weapon they can fire at it, stunning it for just long enough for you to make a fraught dash past. And you? You have nothing at all, and if you are alone – and the ferocity of the monster ensures that all but experienced Dark Messiah players will be at several points in this adventure – you can only listen out for the disturbing sound of its unnatural heavy breathing when it’s nearby, slowly peep around the corner into the gloom ahead, and hope it’s facing the other way.

And if it’s not then the only thing you can do is run in the opposite direction and hope you can create enough distance between the two of you for it to lose immediate interest or duck into a nearby room. So why not run all the time just to make sure you don’t get caught? Well, like anyone unused to sprinting for their lives from an ever-evolving and undefeatable monster, your burst of speed is short and limited – so far, so game-y. Unlike most other games with restricted dashing Dark Messiah doesn’t politely switch back to a walking state when you’re done all the running you’re allowed to do but instead lets you to push until you are still running but start to wobble, then push further still until your vision starts blinking red and your heartbeat can be heard over the creepy music and the sound of the monster roaring too-close by, and then you’re still holding down the run button because it’s so close please just a little further and by now you don’t even realise you’re moving slower than a walk until you finally stop dead, unable to move at all until you let go of that damned button. Full recovery from any point of this state is free – you just have to stop trying to run for a bit – the speed at which you return to normal depending on how much of a mess you allowed yourself to get in beforehand. It’s an absolutely brilliant tension-building mechanic for a horror game: You can run… but you shouldn’t – not yet… and so you end up walking slowly and cautiously strafing (shoulder buttons) around corners, thumb hovering over the run button just in case… 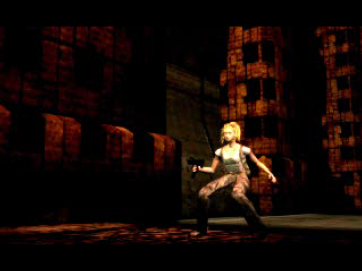 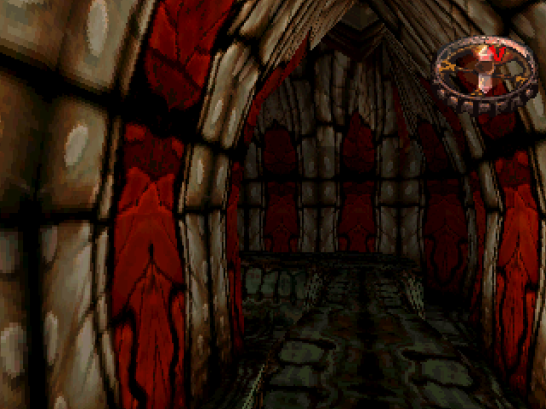 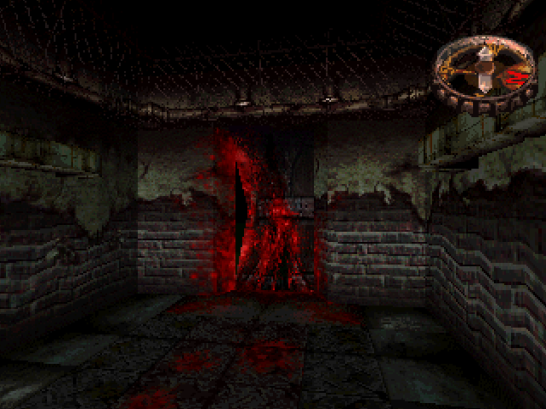 As fun (or “fun”, depending on your personal view of the life-or-death pressure found in horror games) as being left nigh-defenceless and trapped in maze after maze with an immortal beast out for your blood is, it’s also a concept that could very easily wear thin, with contrived appearances in places you need to be making a ten minute walk end up taking an hour and two deaths (Dark Messiah only allows you to save when you change areas which, much like classic Resident Evil‘s limited ink ribbons, forces you to keep on pressing ahead even when you know it’s not safe to do so) after being “surprised” for the nth time. Luckily for us the monster here isn’t wearily predictable or unfair, instead generally set to wander in such a way that you’re just as likely to not encounter is as you are to run head-first into its claws, and when the game does pull a fixed location or event based spawn on you it’s never to block your path and it may not even be near a room that’s essential to your progress anyway (take note, Resident Evil VII). And this leads to another fear: Surely a scary game that shows the player this much consideration is going to leave the central pillar of its terror feeling neutered and harmless? No, not when the story constantly reminds you that any contact at all with this monster kills anyone instantly – you, your partner, and even many of the NPCs you can meet along the way. They may die during scripted events or off-camera after certain tasks have been completed, leaving their bloodied corpses for you to (optionally) find later (I point this out so you know you don’t have to worry about taking too long to figure something out or about luring the monster too close to an NPCs door), with many of them dying for no reason other than to remind you this monster is relentless and methodical, with no-one, no matter how dangerous, strange, or important they seemed when you last spoke to them considered untouchable.

The Tokyo Mesh you spend much of the game running for your life in is split into three strata, each with their own areas, people, and mysteries (there’s plenty beyond that too…). You’re free to explore and go back and forth between each strata’s areas either out of curiosity or to solve the game’s various puzzles, but once you’ve passed through one layer and moved/fallen/awoken in the next you’re done with the previous one forever. This is fantastic because it never allows you to become familiar with anywhere or retreat to safety when things get tough, but it also serves a very practical role too: By greatly limiting the number of areas, items, and points of interest you have access to Dark Messiah never leaves you wondering if that one strange room you found an hour and two strata ago is the reason why you can’t progress now. Map design as a whole is always reasonable, never too large to be a pain to get through or so labyrinthine the early preview available from the information terminals found in many areas reveals a miserable tangle of pathways. Even in the later stages when you’re introduced to conveyor belts, teleporters, and everyone’s favourite dungeon crawler trick – an “infinite” corridor – the level design remains sensible, taut, and always feels like an area designed to be successfully navigated rather than a trap you’re supposed to get lost in.

There are some unusual puzzles along the way – one that would’ve tripped me up if I hadn’t checked this incredible guide involved finding two torn halves of a punch card (used by a machine to grant access to different areas) then using a screwdriver to pierce a memo pad to create a complete handmade replica – but after clearing the game I can say there’s nothing in there that doesn’t make sense in hindsight, and with the way the maps are designed you tend to naturally fall upon the right item, character, or place of interest before you find the missing “Ah-ha! This must be for…” piece of the puzzle. Not everything you can interact with is useful or relevant but there are no red herrings here, only deliberately unsolved mysteries and tantalising threads left dangling in the air, all of them small glimpses or vague clues into Dark Messiah’s bigger picture. 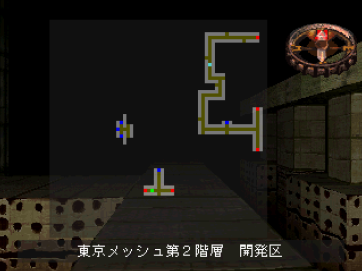 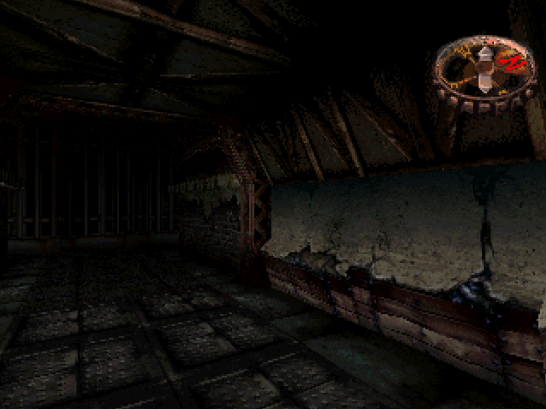 And it’s a bigger picture that never loses an air of deadly secrecy, a place where everything is either strange, dangerous, or both, and you are constantly reminded that your continued existence here is entirely optional. The six endings available (one for each partner, plus one for you alone) all offer interpretations of your harrowing brush with ancient foes beyond your understanding rather than a definitive conclusion, and in an excellent sidestep of the expected rules of any game with an ally permadeath feature this one doesn’t make the mistake of equating fewer deaths with a better ending, each character simply offering a personalised alternative based on their own background and awareness of previous events instead.

Dark Messiah gets a lot of very difficult to judge things right – you are always vulnerable but not helpless, you are always trapped in a maze but never quite lost, you are surrounded by mysteries but always have some idea of what to do, and the story doesn’t even attempt to explain everything but the journey you make still has meaning. The music – if you can really call the haunting uncomfortable soundscape filling your ears that – brings atmospheric wonders like the original Silent Hill and Sting’s Baroque to mind, always unsettling, unpredictable, and exactly the sort of thing you wouldn’t want to hear if you happened to be nervously inching your way through the dark. It’s an enthralling and mysterious ordeal that really does make you believe you’re brushing up against another world but never loses its grip on reality – or its underlying need to be an enjoyable (if terrifying) experience for the person playing either.