Royal Stone is the relatively unknown (and happily now Game Gear Micro‘d) 1995 Japan-only SRPG spiritual sequel to an internationally available Game Gear SRPG you might have already played called Crystal Warriors. It’s also really pretty, the perfect showcase of the handheld’s oft-forgotten expanded colour palette that in the right hands makes Sega’s machine so much more than a battery powered Master System. The chunky sprites and strong colours used throughout the game perfectly compliment the clean lines and strong shapes of Kugatsuhime‘s original artwork, and these solid foundations are further enhanced by the ambitious range of single-use sprites, large portraits, and expressive animations seen both in and out of battle, enabling characters to show some real emotion beyond the four walls of Royal Stone’s pleasantly blue dialogue boxes and battle scenes to have some real action and energy fizzing through them, characters looking back at you over their shoulder when they level up and enemies physically giving chase if a unit retreats from the fight. At times it could almost pass for a good 16-bit console example of the genre, so masterful is this niche little Game Gear title’s use of detail and shading.

And it would’ve been so easy for the game to thoughtlessly trundle down the well-worn RPG path of cute graphics tied to some heroic fantasy evil-bopping as so many have enjoyably done before but instead Royal Stone starts off dark and isn’t afraid of keeping the general tone of the story there. Lead character Ifa begins the game in jail, branded a traitor and due to be executed, while later flashbacks reveal amongst other things a father forced to run himself through with his own sword in front of his daughter and a sweet childhood friendship that is now little more than vicious conflict. It’s an uncommon but effective contrast, and I found the unflinching seriousness of certain events actually cut a little deeper for seeing them play out in what could so easily have been such a vibrant and cheerful RPG – a sense of innocence lost, I suppose.

Another thing you wouldn’t expect to see in title bursting with adorable helpers and fluffy trees is the bane/joy of certain SRPGs (delete as you feel appropriate) – permadeath. When anyone other than Ifa dies in battle (should she fall you get sent back to the title screen) they’re gone forever with no convenient post-fight church revivals or fraught mid-sortie rescues available to bring them back, and as your fighting party is so small – only a maximum of nine characters may take part in any encounter – every death has not only a significant impact on the difficulty of next skirmish but the remainder of the current one as well. To stop your progress from quickly spiralling towards an unwinnable doom new characters can be permanently hired for a small fee at the inns found in the small towns and villages you get to freely wander around between battles, and defeating special monster units out in the field will allow you to use them in your party from the next fight on. I did expect these more outlandish replacements to be a bit of a useless novelty but as you can equip them all – even dragons and sirens – with shop-bought weapons and armour they do make for genuinely helpful replacements capable of fending off whatever’s coming their way from the moment you decide to fling them into the fray. There’s no question that less careful/more unlucky players could still end up fighting their way into an impossible corner while playing Royal Stone, especially as not every town has someone to hire and not every map contains optional monsters to bash into obedience, but the game’s three save slots do make it easy to hold on to an earlier “just in case” file and in practise basic common sense (don’t send a weaker unit to take on a map’s boss, don’t have someone rush off alone, heal as often as possible) tends to be enough to keep the majority of your little army alive.

Sega’s portable SRPG has a few other less intimidating little quirks (also carried over from Crystal Warriors) up its sleeve too: Spells have an incredibly long range right from the get-go, meaning mages and healers can be treated as powerful glass cannons capable of harming or helping units some distance away rather than fragile robe-wearers destined to die a couple of turns after they’ve been brought close enough to actually do something for the first time. Character movement is equally generous and when paired with Royal Stone’s relatively compact battlefields you end up with a game full of short, sharp, fights that wants you to spend more time on the offensive than spending empty turns manoeuvring soldiers into position. Elemental strengths and weaknesses are also present, balanced in such a way the right combination will give you a tangible advantage without being so heavily weighted in one unit’s favour there’s no point in sending a fire-based ally up against a water-aligned enemy. Then there’s my own favourite, the “Scan” spell. In Royal Stone enemies are represented by a generic icon on the map until they’re either engaged in combat or this spell is used on them, and this reveals the enemy you’re up against. It’s an interesting take on the usual “fog of war” concept that adds a welcome touch of tension to the game – you can see something is approaching en masse from the forest to the North, but you can’t tell for sure what’s coming until you’re either close enough to trade blows or you take the time to examine them first. 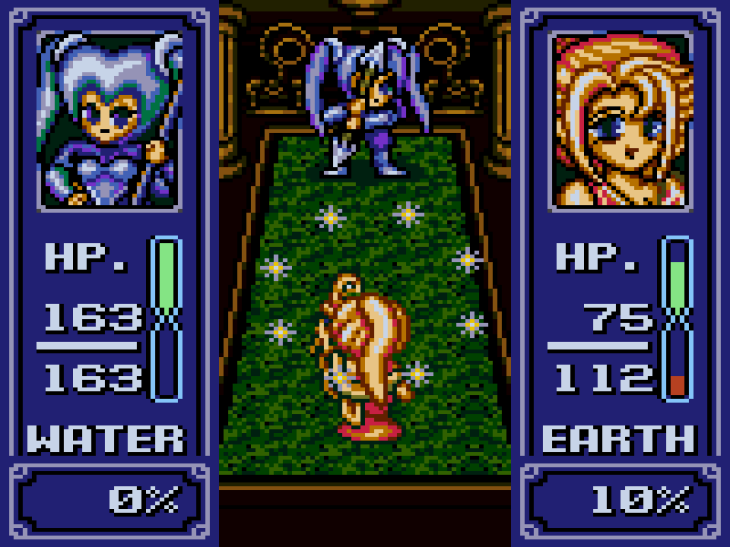 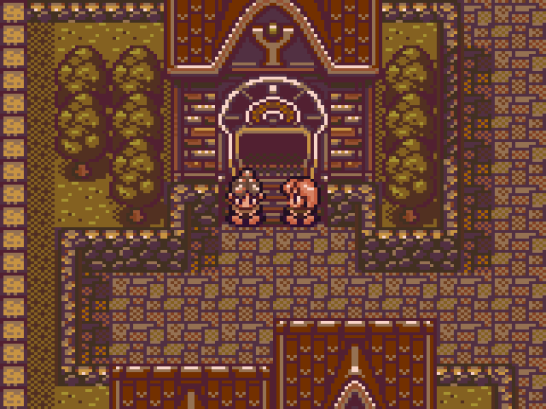 You wouldn’t expect a title like this to have much competition outside of its own equally exclusive (spiritual) prequel but Royal Stone is unlucky enough to have an entire trilogy of Shining Forces, two stabs at Shin Megami Tensei, four Madou Monogataris and plenty more beyond those obvious picks all vying for a Game Gear-owning RPG fan’s attention. Does it come out on top? No – what could when faced with a deluge big-name competitors like that? But what’s here is an above-and-beyond polishing of Crystal Warriors’ foundations and by sticking to a rigid town/battle/town/battle structure for its sixteen chapters portable players can very quickly get stuck in and make progress within seconds of flipping on the power switch, the relative simplicity of the combat system allowing you to spend more time clashing with hordes on verdant green plains and casting magical spells by bright blue waterfalls than draining six expensive AA batteries clicking through menus or fussing over equipment. Royal Stone’s battles may be small, its towns even smaller, and the dialogue unfailingly to the point, but that’s exactly what you’d want from an old handheld RPG, and that’s exactly what Royal Stone delivers.