Kuusou Kagaku Sekai Gulliver Boy (created by Oji Hiroi – of Sakura Taisen fame – and Toyoo Ashida, director of Vampire Hunter D and… you’ll see) is Hudson Soft‘s RPG retelling of the TV series of the same name. Both the game (on PC Engine) and the show debuted in 1995, with this 1996 remaster (as odd as it sounds to use that term to describe a mid-Nineties game) for the Saturn released the year after.

Being a cross-media project brings with it plenty of great budget-friendly opportunities: Two big projects get to share one set of costly character design and general planning/setting work, as well as voice actors, animation studios, and to a certain extent advertising. Unfortunately it also introduces some unique challenges too – who wants to click their way through a series they’ve already seen (apart from those of us buying Galaxy Fraulein Yuna FX)? And who will sit through a TV show week after week if the game they cleared months ago already told them how it all plays out? To combat this both versions of Gulliver Boy follow the same general storyline but exactly when people meet, how they reach certain places, who’s terrorising them when they get there, and even to a certain extent the personality of the cast as well (Edison’s “funny” habit of accidentally planting his face in Misty’s boobs seems to be mercifully absent in the game) will be different. They completely contradict each other in some places and introduce characters or plot points that don’t exist in the other, ensuring both remain worth experiencing (and buying) regardless of how familiar you are with your first brush with the tale.

Whichever adaptation you find yourself sitting down with both Gulliver Boys use a fictionalised version of 19th century Europe that’s been shoved in a blender as their setting, resulting in a mishmash of pilfered names and ideas liberally scattered across a good chunk of almost-Europe. Gulliver’s friend and travelling companion is a gadget nerd called Edison, Lawrence of Arabia makes an appearance, there are ninjas and noodles in Napoli, and a Chinese circus in Venice. Oh! and there are loads of pirates all over the place too.

Wait – ninjas and pirates? In one game? That should automatically make Gulliver Boy the greatest RPG ever made, shouldn’t it?

And sometimes it is. Slick FMV sequences and animated bosses alike almost fill the screen, there’s a nifty inter-town trading system that encourages you to learn which goods sell best where to maximise your profits, and dramatic events will alter – sometimes considerably – depending on your own choices in the heat of the moment or where you went/who you spoke to beforehand. When the game’s on a roll entire cities are flooded to disastrous effect in cataclysmic scenes, ancient Atlantean technology is unearthed and activated, charming new characters unexpectedly join your group, and you find yourself squaring up to intimidating enemies all alone. At its best Gulliver Boy’s got more than a whiff of The Mysterious Cities of Gold about it: three young kids – the hero, the mysterious girl, and the smart one – go off on incredible adventures in their almost magical craft and combat evil forces – and this is surely no accident, seeing as some episodes of that memorable TV series were directed by Gulliver Boy’s co-creator and TV series director Toyoo Ashida. I’ll happily admit I squeaked like a small child watching The Mysterious Cities of Gold for the first time when I saw there was a real connection between the two, thrilled at the thought of finally playing through something similar to a childhood favourite. 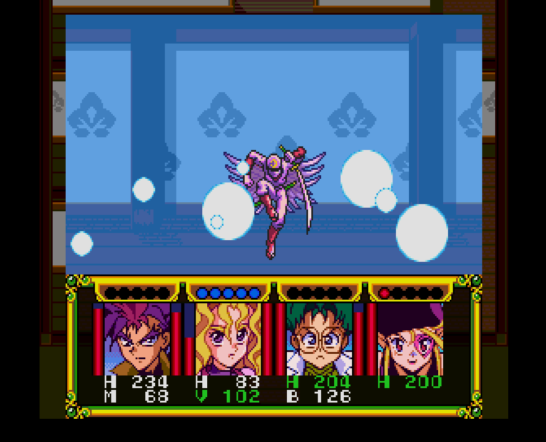 Unfortunately these brushes with greatness are undermined by some very old-fashioned RPG design principles, even when judged by the standards of the time. One of the most immediately obvious (and personally most aggravating) is the “flat” collision detection: Stone columns and tiled rooftops that are clearly high off the ground occupy squares on the floor as far as the game’s concerned, making a potted plant on a desk in the foreground as impassable an object as any rock slide, brick wall, or magical barrier. Even if this was Hudson’s first Saturn game (as it apparently was), it sure as heck wasn’t their first for the PC Engine, and even then 1995 was the year of Chrono Trigger, Tactics Ogre, and King’s Field II – it’s a nonsensical, jarring, and avoidable decision that can’t be generously attributed to a lack of talent or technology. Lots of other little things sour what should be a soaring journey powered by youthful enthusiasm: You’re often expected to grind for grinding’s sake in a way that was only ever really acceptable in computer RPGs created a decade earlier. Certain chests automatically trigger enemy encounters, or have a monster placed nearby ready to rush at anyone hoping for a reward – it’s not a known risk to weigh up against the potential benefits, it’s just a mood-sapping cheap shot. Items gained from a fight can be cursed, slowing your walking pace and battle speed to a crawl until you either purify them at a church or throw them away in frustration (they can’t be used in this state, and you can’t even tell if they’re worth keeping either).

And so Gulliver Boy strangely encapsulates much of the very best and very worst the Nineties idea of this evergreen genre had to offer, with banal wandering through a maze of right-angled dungeon corridors punctuated by high quality FMV cutscenes, the promise of adventure across bright blue seas interrupted by yet another battle of no relevance or tactical substance, and fun new characters found only after talking your way through a very specific chain of conversations with several people in scattered locations first. I keep teetering back and forth on whether I like it or not as I grumble my way through another unforced error or ancient genre hangover (I was going to say “Famicom-like” but the Famicom isn’t short of inventive and forward-thinking RPGs) only to then find myself cheering as another lavish and genuinely exciting event plays out. “Uneven” is perhaps the only honest way to describe it – the highs could touch the clouds in Gulliver Boy’s bright blue skies, but the lows plunge to the very bottom of the deep blue sea.

2 thoughts on “Ninjas and pirates! NINJAS AND PIRATES!!”