Let’s get the one question on everyone’s lips out of the way before we get started: Fans of dinosaurs – I’m sorry to say there are no terrible lizards at all in Falcom’s only first-person dungeon crawler, Dinosaur.

I know, I know. At least we’ll always have Dino Crisis 2.

The good news is this 2002 update of Falcom’s 1990 PC-88/PC-98/FM-Towns adventure, titled Dinosaur Resurrection, is an absolutely fantastic game anyway – and one that’s astonishingly faithful to the game it’s based on. The artwork is in most instances a very straightforward remake of the original portraits, monster art, and cutscenes reusing the exact same expressions, poses, and layouts they did on floppy disc. Much of the dialogue and descriptive text is lifted wholesale from the old game too. The only major difference lies in the mazes you’ll fight your way through and the beautifully executed 3D location art used to represent them: their layouts are always broadly reminiscent of, but rarely identical to, the originals – not simplified or easier for fear of upsetting a modern audience, just different enough to stop old fans being able to play through on muscle memory alone.

The strange thing is Resurrection doesn’t play like a facelift-and-a-bit of what was already a very old game in an even older genre at all – it plays like a confidently made and unique dungeon crawler that stands out even in a niche littered with industry-defining legends and countless other competently crafted titles.

The tone of this fantasy adventure is dark in a way that feels more weighty than the gratuitous blood splatter of some Ys titles or many of the brave sacrificial deaths and grisly plot threads in Falcom’s other works, a sort of melancholy undercurrent of hope lost and precious things fading away and along the way you’ll find the ground piled high with stinking corpses, organic things pulsing with unholy intent, and ghosts lingering in forbidden places filled with murderous shadows, zombie dragons, and unnatural eyeless clusters of body parts. Dinosaur even contains a game-long (and equally bleak) alternative scenario for those eager to spend more time in this grim and unforgiving world, accessible either by performing some very specific actions during the opening section of the game or newly in Resurrection offered up when starting a repeat playthrough. This second story still takes you to the same places to (mostly) fight the same people and monsters the standard tale does, but only lead character Ash – cursed to forever be the last man standing on every bloody battlefield he fights on in this war-torn land – and the lute-playing Heath return; the other three party members are completely new characters with their own introductions, motivations, special events, battle skills, and dialogue. As you may expect from a game that decided to cram a full game’s worth of extra story in as a nifty bonus there’s a lot of attention to detail and small but significant freedoms to be found within both adventures, with many conversations playing out a little differently depending on who you encountered and when, and in one dramatic instance when a certain party member is struck blind you can, but don’t have to, restore their sight – a decision that’s then reflected in every character portrait that follows and even in the artwork shown during the ending as well.

However in a game like this such scenes, no matter how beautifully illustrated or written they may be, can feel at times like the other thing you politely sit through when you’re not playing and only vaguely related to the experience you’ve personally had up to that point. Dinosaur goes a long way to blurring this dividing line between the plot and the gameplay by scattering plenty of short additional scenes and descriptions throughout your wanderings – someone anxiously waiting for news back at town, a mysterious butterfly flitting through the forest, a prisoner pleading with you to help them as you walk away from their cell – as well as quick observations and comments by the cast that double as helpful in-character hints: If there’s a secret door, weird plot-relevant mirror ahead, or something you need to go grab from elsewhere, the characters will voluntarily talk about feeling cold drafts of air coming through the walls or faintly hearing music coming from somewhere nearby, or the narration will mention a humanoid shape in the room off to one side (even though you’ve not looked in that direction yet) and rustles in the bushes ahead. There’s always enough silence and freedom while you’re exploring to let your imagination come alive and for your own choices to matter, but the game will always speak up if doing so will add some texture to your journey or gently offer you a nudge in the right direction. 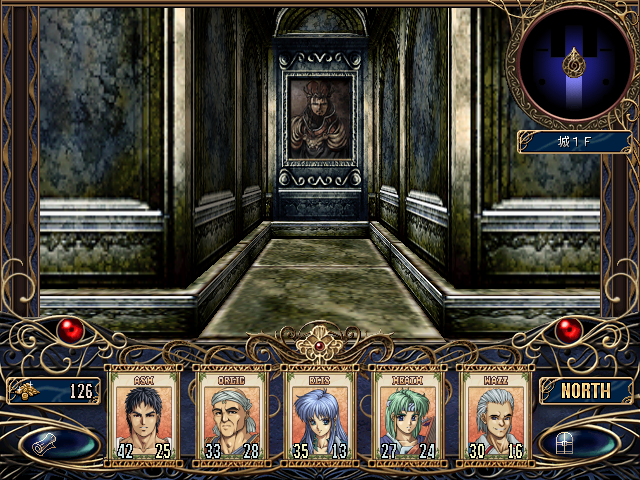 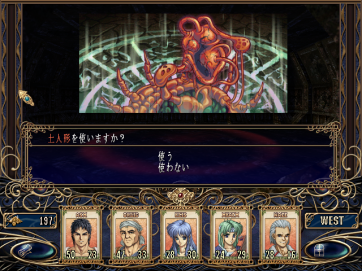 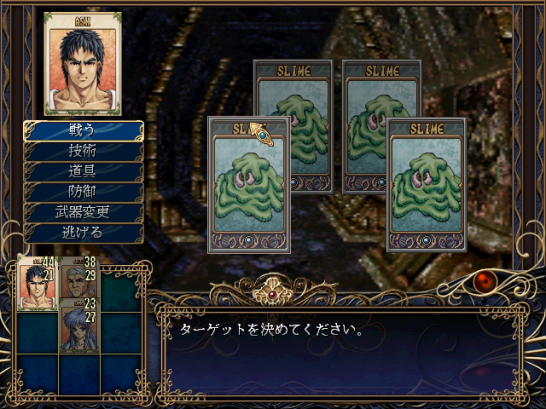 Those little nudges keeping you on the right track come in in plenty of other forms too, such as the generous save system that allows you to save and load at any time you’re not in battle, and do so in any one of a hundred save slots. Find yourself oh-so-nearly defeating a boss only to fall just a few blows away from certain victory due to an unlucky miss or a fudged command? That’s not a huge problem in Dinosaur’s eyes: on death you’re not only given the usual options of reloading an earlier save or hastily quitting so you can go have a sulk, you can also retry the fight from the beginning as many times as you’ve got the patience to do so, regardless of when you last saved the game. Resting is performed by a quick tap of the Enter key absolutely anywhere and if successful will instantly restore a small portion of every conscious party member’s health and magic points… if they don’t get attacked instead. Luckily Dinosaur has a convenient visual aid to help you make an informed decision on your party’s current safety level: small eye-like orbs on either side of the screen’s ornate borders will show a range of colours from a calm green if they’re completely safe to a fierce blood red if they’re more than likely to run into one of the game’s random enemy battles on the next step. Remarkably Dinosaur allows you to exert a slight influence over the frequency of these encounters in a brilliantly common-sense way: You’re always in more danger out in the open than you are tucked away in a little alcove surrounded by solid walls so if you need to recover it’s a good idea to at least have your back to a wall before you try to rest.

When viewed individually these are all good and clearly helpful features, but together they become something amazing – Dinosaur is a game that promises to always let you struggle and fight and hide and explore and swear your way to victory, never cutting a hard-fought dive into the unknown short just because you could only afford five potions back in town instead of the ten you didn’t know you needed to make it through.

This town – Zamhamn – the only place of real safety in the entire game, hosts all the usual RPG vendors but the one you’ll be visiting most often isn’t the medic or the armourer – it’s the item shop. This place sells a selection of handy scrolls and tools to support your dangerous dungeoneering, like the Exit scroll that instantly warps your party straight back to town to rest, regroup, and rearm or the lamps that enlarge the already generous minimap that’s available at all times by default (as is a compass) for a short while, helping you to get a better view of your surroundings. Another welcome aid is a spool of magical thread; a reusable item allowing you to set your current position as a return point and then magically teleport back there whenever you like, making it easy to explore a potential route ahead without finding yourself stuck somewhere you don’t want to be, or to hop back to town using an Exit scroll and then after a bit of shopping use the thread to instantly reappear exactly where you were previously without wasting any time trekking over old ground. The cost of these accessories varies but they’re all attainable even early on, intended as items to be used regularly than the last-ditch spending of someone at the end of their tether. 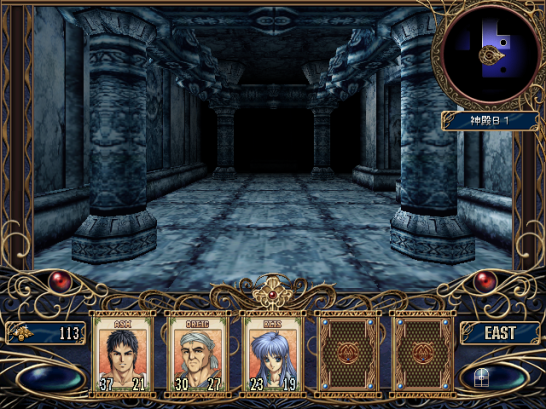 All of the above may sound like far too much friendly handholding for a game that’s trying to convey a harsh and threatening atmosphere but in practise all of this assistance actually gives Dinosaur the freedom to be far more punishing and deadly than any game that makes a deliberate effort to be “hard” in a more obviously crowd-pleasing way. Dinosaur will decisively crush those who pay no attention in battle and leave those without a clear plan or a stack of graph paper wandering aimlessly in the gloom – and it can get away with it because it already knows there’s no setback the game can throw at its players they can’t overcome with skill, patience, and all of the hints and tools that have been made available to them. It’s a good dungeon crawler for people who perhaps normally wouldn’t want to play one, as it generally eschews the labyrinths of locks, switches, pitfalls, and traps found in visually similar titles in favour of… let’s say that if Brandish is a first-person dungeon crawler dressed up like an action RPG then Dinosaur is perhaps closer to being a traditional RPG (with all of the chatty predetermined characters and familiar spells and skills that implies) in dungeon crawling clothes. It’s a very well balanced example of the genre, perfectly capturing the often brutal combat as well as the constant need to keep your long-term survival in mind while still remembering this is supposed to be a game, and the people playing it understandably want to have a good (if challenging) time.

[Ko-fi supporters got to read this seven days early! Want to join in?]

2 thoughts on “I have some bad news…”