This charming little PC-98 action-puzzle game is just one of the interactive diversions contained within Compile’s 1996 release DiscStation Vol.11, alongside a gaming buffet of six other DiscStation-exclusive titles. There appears to be at least one true standalone Tanukids release – a Windows 95 compatible CD called “Pa☆Pa☆Puzzle Tanukids” – but beyond a vague awareness of its existence I’m afraid I can’t say much more than that, and I wouldn’t like to assume which came first either (“Windows 95 compatible” and “Released in 1995” are two very different things, after all).

Still! Like all truly great puzzle games, the aim of Tanukids is deceptively simple: All you have to do is walk up to any of the pleasantly rotund tanuki children on the stage to have them follow behind the big tie-wearing, sake-carrying, dad-like tanuki and then walk them back to the safety of the level’s exit.

If only it were that easy… 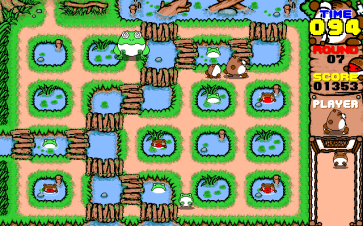 Nobody who has ever had to keep a group of small children in one place for even a few seconds before will be shocked to learn that the tanukids themselves aren’t exactly the best behaved bunch and any time the larger adult tanuki comes into contact with an enemy will immediately send the kids merrily scooting off in all directions, forcing you to go off and round them all up again. They might not even be politely waiting for you to stroll on by in the first place either but instead stuck crying their adorable little eyes out in a shallow pool of water or mischievously following a giant (and very angry) wild boar around, flanked on either side by a pair of very cute boarlets… baby boar… shoats; requiring some quick thinking and good timing if they’re going to be safely brought home.

Your forest-dwelling foes come in three distinct varieties. The main antagonist is a fashionable yellow fox: In some stages he can be found wandering around wearing a pair of bright red boxing gloves, in others he’ll be hiding behind a tree or waiting underneath a lily pad for an unsuspecting player to walk by before launching a comical attack in an attempt to temporarily stun our heroic dadnuki and send the kids off again, wasting precious time. Little boar and later on hoppity green frogs act as tiny free-range troubles to be avoided (unless you want another shoat-scattering scenario and like having ten seconds taken off the clock every time the tie-wearing tanuki’s touched), with the frogs able to take shortcuts you can’t by leaping across dainty lily pads that aren’t capable of supporting a tanuki’s more generous weight. Moles occasionally make an appearance too, poking up from under the surface at pre-fixed junctions to temporarily block your path.

Removing enemies of any size or shape from the field is impossible but thankfully you’re not left completely defenseless against this assortment of mildly antagonistic wildlife as a quick stab of the space bar will make our chunky child corraler beat his enormous belly like a drum, causing all regular-sized troublemakers and kids alike to harmlessly stay in place for a few short seconds – which is just the thing you need when trying to pick up meandering tanukids or need to slip past an enemy without getting hurt. Bosses – yes a cheap compilation game that doesn’t even have a dozen stages has multiple bosses across three unique themed areas, bless Compile – work a little differently. These larger opponents can’t be stunned by any amount of belly-slapping at all, and must instead be manipulated into releasing the tanuki pups by doing something clever instead – like making the giant frog slam its big legs down next to a trapped kid to force them out of the water, for example.

Even so, if that was all Tanukids was you’d have a pleasantly simple little game on your hands that just happened to be beautifully dressed up with some wonderfully expressive sprites… but there’s a special something at work here that makes the game worth engaging with as seriously and intensely as anything else.

You may have to rescue all the tanukids to clear the stage but you don’t have to rescue them all at once. So why bother trailing a long line of fuzzballs behind at all when it’s easier to bundle them through the exit one or two at a time? Because you’re rewarded for making the effort. Taking one kid through the exit adds 10 points to your score – but if you bring in multiple pups at once you activate an incremental bonus multiplier. So! Four lots of one kid is worth 40 points – 10, 10, 10, 10 – but one lot of four kids is worth a whopping 100 points – 10, 20, 30, 40. On top of that you can also earn an additional “Perfect” bonus for bringing in every last floof-pup in the stage to the exit at the same time, the exact amount awarded depending on the stage cleared: Stage 3 will net you a 300 point Perfect bonus, Stage 4 a 400 point Perfect bonus, and so on. 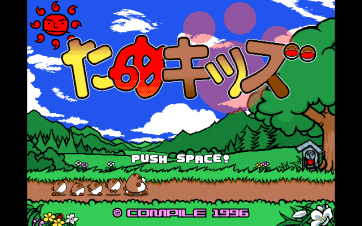 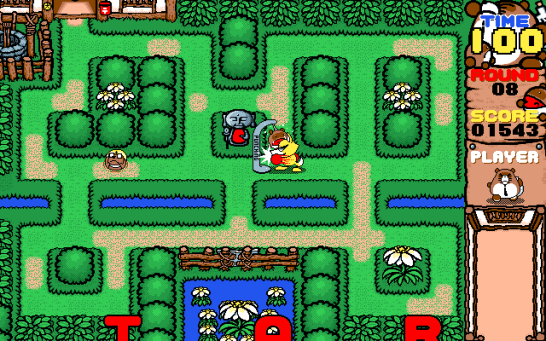 Although this is available free on Project EGG (for active EGG subscribers – and yes, international Paypal-paying customers are always more than welcome there) and presented as a standalone release it’s not exactly fair to compare it to other commercial puzzle games released around the same time: Tanukids was always designed to be one small part of an affordable variety package, an enjoyable snack of a game, something to play for a bit of fun; it was never meant to go up against the likes of Lemmings or Puyo Puyo.

And when taken within that context there’s no doubt Tanukids more than fulfils its intended purpose. It’s short but fully featured, a game that takes an entertainingly straightforward concept and then layers and plays with its established rules in a way that makes every level feel fresh, every marching line of tanukids a personal triumph. Compile’s incredible talent really shines through in every moment –  and to think that for them this was a bit extra on the side, one more nice thing in a compilation of other also nice things? Incredible.

It’s officially free (terms and conditions apply), a fabulous slice of low-commitment fun, and an easily accessible (in every sense of the word) Japanese computer game – what on Earth are you waiting for?

[Ko-fi supporters read this last week! Thank you everyone for your help!]