I find unusual old games by now-famous developers absolutely irresistible – just look at Square’s 1986 sci-fi computer game Cruise Chaser Blassty and tell me honestly that’s not fascinating (if flawed) – which is why I had to snap up Quest’s (yep, that’s Tactics Ogre Quest) Famicom platformer Maten Douji, known in the US under its localised title Conquest of the Crystal Palace (there appears to have been no European release at all), as soon as I possibly could. 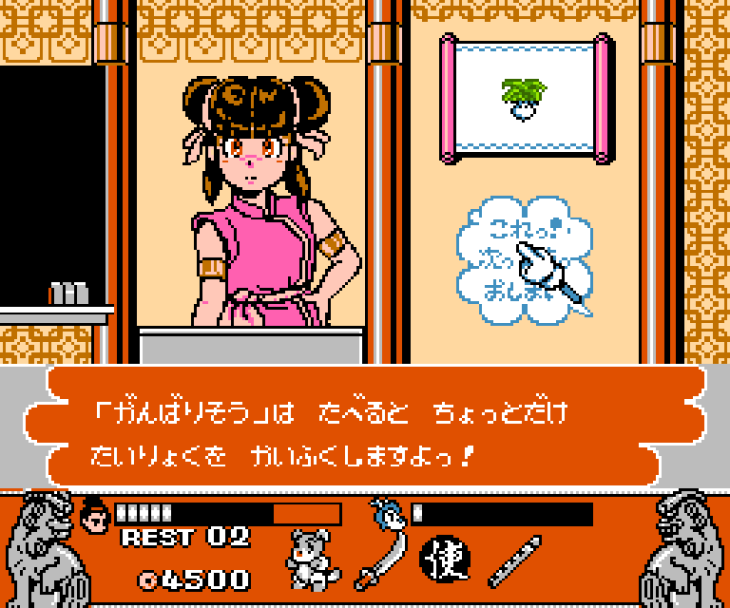 It’s a well made runny-jumpy action platformer for the era that begins in an unusual way: Your magical talking dog asks you to pick one of three permanent benefits from a simple fireball spell, an extended health bar, and a better jump; and this welcome boost will then last for the remainder of your trek across the game’s five stages. Whatever you settle on you’ll always have your (surprisingly capable) sword to hand and your faithful dog to call upon whenever you need them (they behave as a sort of unpredictable independent attack), so long as they’ve got something left in their health gauge. During play enemies may drop a welcome boost to your life bar or even a temporary power up for your sword or spell, but they’re more likely to drop coins, which can then be spent at Rinpu’s shop. Here you can buy items that restore your health (your faithful hound’s too), extra lives, temporary equivalents of the permanent upgrades offered at the beginning of the adventure, and more – for a price. These helpful tools aren’t cheap but they are generally affordable, from a certain point of view: you’re not going to be able to blindly buy everything you want or need but I found through normal non-grindy play I could reasonably expect to restore a good chunk of my health bar and either buy or very nearly be able to buy something else with my left over coins. Those who make the effort can buy more, and those who don’t will still be able to walk away with something useful. 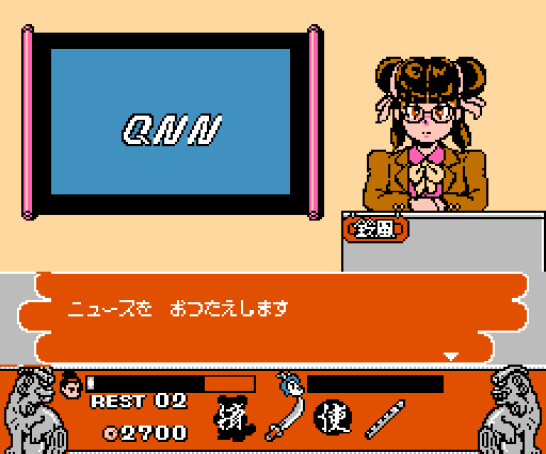 And that’s all great – who doesn’t enjoy a competent Eighties platformer possessing just the right mix of fairness, difficulty, weird break-the-loop endgame bits, and those special safe spots that make gruelling boss battles that much easier?

But what I really want to talk about are the graphics. There are moments where crisp blue water rushes down stone mountainsides, creepy ghost-babies vomit from their pikes onto the ground below, and lava spectacularly erupts from the deadly flames rising up from the bottom of the screen. Some enemies – disembodied hands, giant spitting flytrap-like plants – are seen only in one section of one stage; an incredible luxury in any game, but perhaps especially so in a 2D title running on an 8-bit console. The short intro sequence uses a layer of parallax scrolling to give a sense of depth and speed to our hero’s bounding across the foreground against a clear blue sky. The third stage’s everything is composed of nothing but forever-screaming faces and animated disembodied heads, the ground beneath your feet disconcertingly expressive. Maten Douji is frequently impressive without any patronising “…for a Famicom game” caveats – it’s big and bold in a way that makes the ambitions and efforts of the team behind it obvious even when it’s not filling the screen with enormous boss sprites or keeping the action going with minimal flickering. 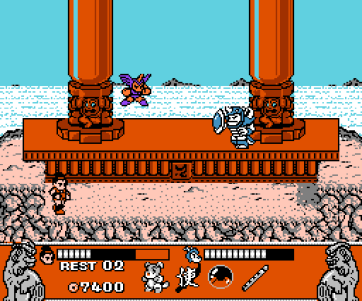 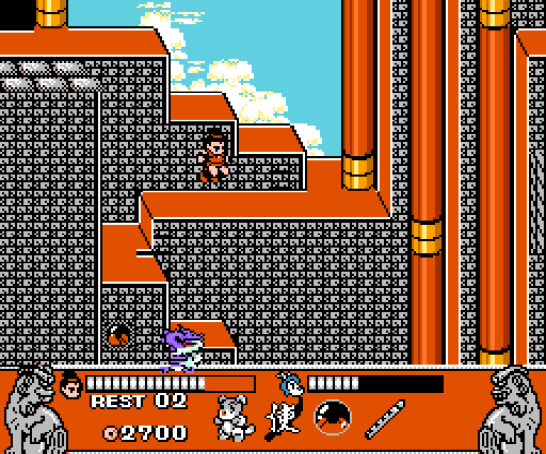 Only there’s a lot more to it than simply (as if doing any of those things was “simple”) looking good, as these artistic flourishes are used not only to wow but also to construct a carefully designed world – an adventure! And this begins the instant you start to play with the first stage’s level design actually reflecting the mountain climb you’re supposed to be experiencing, sending you further and further upwards until bright day wordlessly fades to warm dusk to starry night and back again as you wind your way past rock-spitting monsters and skeletons on your way to the summit. It’s not a long or especially arduous path to the top but everything you can see tells you this was a long and epic journey, and so your little trip makes you believe you’ve accomplished something special without interrupting the action or dragging itself out, as if you’ve just played your way through a rock climbing movie montage sequence. The second stage then carries on from your new vantage point up in the clouds, the background moving from blue skies to golden dragons twisted around bright red columns as you enter the shrine mentioned in the level’s title, and the transition from the end of the third stage to the start of the fourth is on Sonic The Hedgehog 3’s level of seamlessness – it literally carries on from the same screen stage three finishes on as though you’re travelling through a continuous place you can’t get out of rather than from one neatly cleared level to the next. To further highlight your sense of place beautiful unfurling scrolls mark your travels across the bright above and the dark below before each stage, marking past triumphs as well as offering hints at dangers still to come.

And then there’s all the little touches too, like the way doors in the final stage don’t politely open when you try to walk through them (when you think about it, why would they?), so you have to heroically slash them open with your sword to proceed – your own actions creating a tiny flash of interactive fiction. Or when you’re in the shop and ask for an explanation of a new magic type: Maten Douji smoothly slides your view over to a chalkboard showing a “hand drawn” diagram with Rinpu suddenly wearing some teacherly glasses to match, and if there’s “breaking news” (level-relevant tips and secrets) as you scroll through the items the view will slide the other way and she’ll be inexplicably sat behind a desk, reading out the news in a serious suit. It’s ridiculous – and it’s fun. As is getting kicked out of the shop by a visibly furious Rinpu for repeatedly attempting to buy an item you can’t afford too.

Maten Douji’s firm grasp of the fundamentals of decent design make for a good game, but it’s all those wonderful “meaningless” extras that make it a real delight. Effectively communicating everything from gasp-inducing awe to the unashamedly comedic, this little Famicom game is far more than just a curiosity from “The Ogre Battle people” – it’s a grand adventure filled with memorable moments and real excitement.

[This post wouldn’t exist without the support I received through Ko-fi! Thank you so much!]