I’m sure this one will look very familiar even if you’ve never been anywhere near a Japanese PlayStation 2: 2005’s Namco X Capcom is perhaps best described at this point in time as Project X Zone 0, as bar the obvious language barrier (a fan translation is available here) and complete lack of Sega just about everything in here – the general structure of the game itself, the frequent mid-mission breaks as new friends and enemies alike burst onto the scene and talk at each other, those side-on button mashing 2D combos – will immediately make 3DS owners feel right at home.

It’s also exactly as long (or long-winded, depending on your current patience reserves) as its sequels; every phase lasting an age as you rack up damaging aerial combos using the same range of simple button commands for everyone you ever have control over and then defend against every enemy on the battlefield using uncomplicated up/down or left/right inputs as the same is done to you. Bosses will always run off before you can deal the final blow to their inflated pool of HP and new ones appear with a gaggle of goons in tow just as you thought you’d finished a stage, dialogue only stretching things out even further as characters chat with their series co-stars and then go on to talk to people from a clutch of other games set across multiple timelines, the multi-star nature of the game insisting everyone on screen voices an opinion on everything from the relative cuteness of Klonoa‘s Moos to the appearance of Soul Edge‘s titular blade.

And you know what? In this context that’s absolutely fine. Nobody can really buy a license-busting crossover, a game that’s by design all about seeing some of Namco’s finest team up with their famous Capcom counterparts (and even goes so far to call itself nothing other than “Namco Cross Capcom“), and then sincerely complain that it focusses too much on the stellar cast drawn from several decades of the biggest games in their respective genres – that’d be a bit like going to a beach and then moaning about the salty water ruining all of that nice dry sand.

Namco X Capcom knows its gameplay’s here to serve purely as a loose frame to hang many many hours of fanservice on and gleefully plays up to this entertaining task, letting us see what happens when Xenosaga‘s KOS-MOS tussles with Street Fighter‘s Cammy, Darkstalkers Dimitri meets Ghouls & Ghosts Red Arremer, Dino Crisis characters talk to Resident Evil leads about Third Energy, Tales of… heroes fight alongside Gilgamesh (of The Tower of Druaga fame) and Wonder Momo performs in the Namco Theatre (there’s even a Pac-Man statue outside). It creates a soundscape filled with recognisable up-tempo arrangements of all your favourite tunes – always changing to match the currently active character – and perfectly recreates all of the old punches, kicks, and animated special attacks you were hoping to see. That’s what we’re all here for, and that’s what the game delivers. 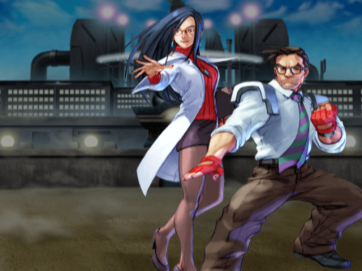 Most importantly of all the game knows better than to take itself seriously – this is a game where Jin Kazama can punch ghosts after all – and there are many events that are created solely for the purpose of making you smile, like the time Zabel (Raptor) unleashes ultra-cartoony heart-shaped eyes at Lei Lei (Hsien-Ko), or when Tekken‘s King had to repeatedly remind Darkstalkers’ Felicia he’s a regular man wearing a cat-mask and not actually a cat-man. Even individual attacks can be humourous meta-references: Attack any enemy at long range using Ken and… Hadouken! Hadouken! Hadouken! Hadouken!… Well, what else did you expect him to do? Crucially these moments always arise from the characters themselves or the situations they find themselves in rather than at their expense, every scene making Namco X Capcom feel like a crossover born out of a sincere mutual love and respect – and a respect that goes beyond cherry-picking the most marketable IPs at the time of the game’s release for inclusion. Resident Evil’s representation comes entirely from the stars of the GunCon 2-compatible Resident Evil: Dead Aim (by the time of Namco X Capcom’s release Resident Evil 4 was already a few months old and had been in development since forever, yet as far as this game’s concerned Leon and co. don’t exist at all), end game bosses from half a dozen different games old and new laugh evilly from the shadows, and Bravoman gets far more screen time than he managed to secure in his own game. It really does make you believe the whole of Namco and Capcom joined forces purely for creativity’s sake, historical weight and the thrill of variety beating potential sales forecasts and focus group testing every time. Which doesn’t mean headline acts are pushed to one side for novelty’s sake – Street Fighter has obvious and early representation in the form of Ryu, Ken, Chun Li (and more) and one of the first things the plot does is introduce Xenosaga’s Shion (ugh) and MOMO – but there is a sense of camaraderie here, that everyone’s equal in crossover land. 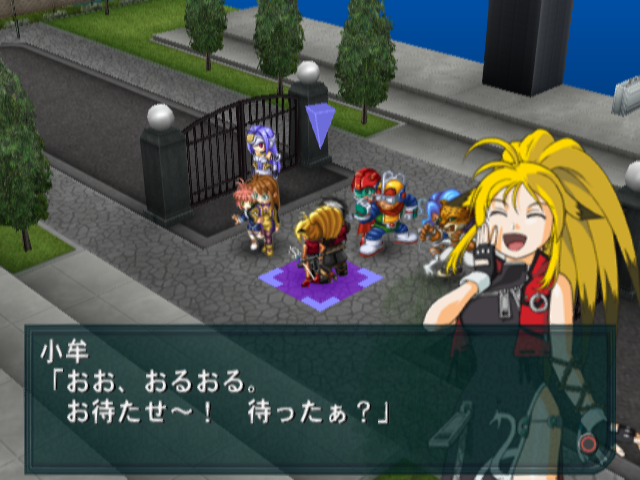 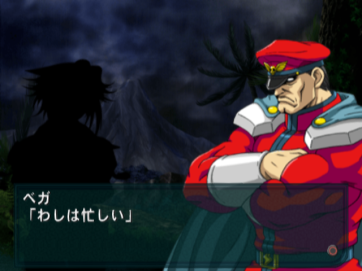 So what is Namco X Capcom, bar one company short of two games you’ve probably already played; or could at the very least buy and play far more easily than you could this? What does it add to the SRPG genre? How do the scenarios elevate or expand upon the characters featured within them? Well… it doesn’t even try to do any of those things, not really.

Not that it matters. This game has one purpose, and that’s to parade as many characters as they could get signed off by the legal departments in front of your eyeballs in as entertaining and accessible a way as possible. Every scene and beautifully realised animation crackles with energy, as if not even the game itself can quite believe its luck – “Namco and Capcom together? Here? Now? Are we really doing this?!” – and the simplistic, repetitive, and incredibly lengthy battles give you the space to focus on the things that really matters: BEATING UP DINOSAURS WITH MIKE HAGGAR Enjoying this carnival of references to your favourite games and revelling in the joyful absurdity of it all. It may not be the world’s greatest SRPG, but then again it’s not really an SRPG at all – it’s a celebration of gaming history, two companies letting their hair down and having a little fun.

[This post only exists because of the support I received through Ko-fi! Thank you!]

One thought on “This battle is about to explode!”