As I was filling up my shopping cart with digital copies of old X-COM games to inevitably lose at and the wonderful Moonstone: A Hard Day’s Knight (a game that routinely fetches second hand prices I can only describe as offensive on Amiga or PC) while browsing GOG in the hope of purchasing some Good Old Games the Microprose-published DOS title The Legacy (sometimes referred to as The Legacy: Realm of Terror) caught my eye. I wasn’t entirely sure what to expect from it beyond “old” and “an attempt at being spooky”; UK-based computer games from 1993, especially ones that want to mash several novel twists on a variety of genres together and then present all of that via a bespoke dynamic windowing system tend to go one of two ways: They’re either a well-intentioned dog’s dinner wrestling with concepts someone else would successfully bring to the mainstream in a decade’s time or an absolute masterpiece that sold all of eight copies on release, and two of those were to the director’s mum.

I won’t keep you in suspense any longer: The Legacy is definitely the latter. 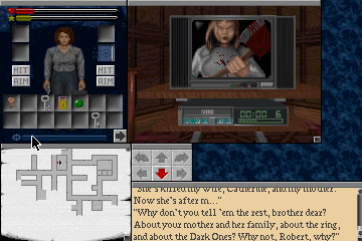 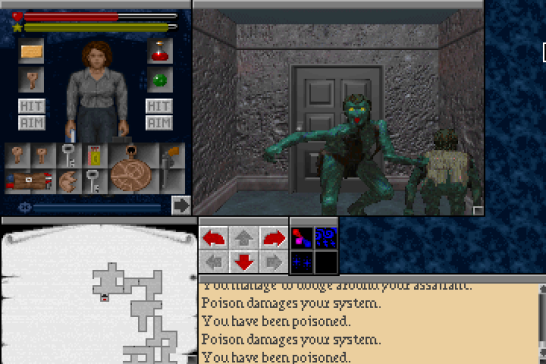 This self-described Adventure Role-Playing Game is set in the Nineties (or the modern day, as it was), and begins with an old mansion door somewhere in the US ominously shutting behind you. All alone, you find yourself in an imposing hall full of paintings and vases, the grand wooden staircase before you splitting off to the left and right as it hits the back wall, with smaller stairs leading up to locked doors in need of a key on the second floor. Zombies roam the corridors nearby, their awful moans an accompaniment to the foreboding minimalist soundtrack playing through your speakers, notes detailing awful events long passed lie on the floor, and an attaché case nearby allows players to not only carry a greater number of items but also play Inventory Tetris with their different shapes and sizes as well.

As eye-catching as typing out “Resident Evil: DOS Edition” is The Legacy predates Capcom’s horror classic by three years and is also well-made and inventive enough to deserve better than be neatly noted and then politely packed away as the mouse driven alike of a more popular game.

So what is it really? 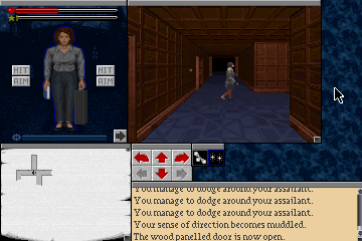 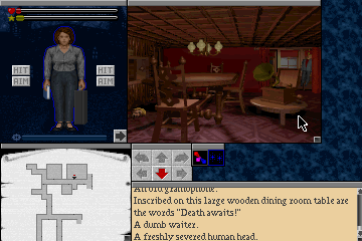 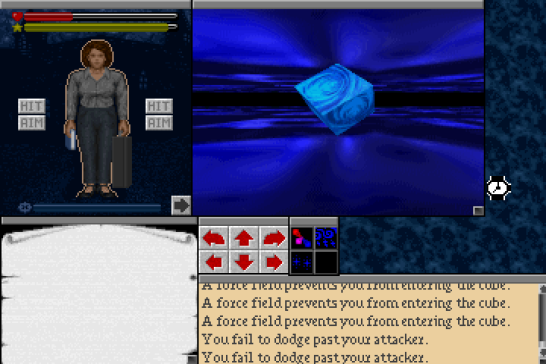 The Legacy is a stat driven, inventory heavy, skill checking, item examining, RPG in creepy clothing. You navigate the mansion’s halls the same way you would the grid based dungeon crawlers of old – think Dungeon Master and Eye of the Beholder  – with you flip-screen stepping between coordinates on the map as enemies stalk the wood-panelled corridors in real time. Your character’s performance is governed by five basic statistics, manually improved whenever you like using the experience/skill points you silently accrue from fighting monsters, investigating strange rooms, and attempting to use the inscrutable objects you find scattered across the mansion. The first three of these (Strength, Knowledge, and Dexterity) break down into four more specialist areas you can spend your skill points improving, for example Knowledge breaks down into Electronics, First Aid, Meditation, and Mechanics; each one having a direct and independent impact on your likelihood to succeed at a range of specific actions (as well as how effective they’ll be once performed) – meaning it’s perfectly possible to be a fantastic mechanic and still be relatively terrible at bandaging yourself up even though the two fall under the same general umbrella. The same is also true for spells, which all belong to one of four different categories (all with appropriately dramatic names like “The Destructors”) – and also consume the same skill points you could be using to boost your poison resistance or sword fighting capabilities too. This seemingly minor detail adds a new layer of tension to your character building: Do you bolster something safe and obvious (such as increasing your strength or stamina) or improve something a little more abstract (such as your ability to muddle enemy’s minds, sending them harmlessly wandering off for a short while)?

With the usual party of four to six valiant adventurers all of this in-depth fiddling this would soon turn into a lot of boring old work – make sure the tank guy’s in front, give the mage all the INT (but a bit of STR so they don’t die to one hit), who was it who could fix machinery again?, and so on – but as your entire group is only ever the sole unlucky inheritor of the Winthrop estate the game always stays on the entertaining side of in-depth. All of your skill points, spell pages, and best equipment only ever go to one character so by definition they’re always going to the best at everything your “team” has to do, and while you may have to worry about fitting a heavy key or a large astrolabe into your limited inventory space you never have to find a quiet corner to pass things back and forth between front/back row characters or dump everything you don’t immediately need on the party “mule”.

You’re still alive? Then you’ve got everything – and everyone – you need.

Crucially The Legacy uses these stats beyond the typical critical hit rolls and skill success/failures, creating an intricate and unpredictable environment where sequence-breaking success is just as likely as unexpected bad luck. It’s possible to force some doors open even if you haven’t got the right key (or even if gaining early access to the area behind is a good idea), nimbly dodge past powerful enemies that would otherwise block your only escape route, and have the gun you just fired jam and need repairing as a monster lumbers towards you in the dark…

And while all of this is happening precious time is passing by, your character becoming more weary and hungry as the night wears on. Edible food and safe places to rest are few and far between – and exhausted characters are more likely to fail or fumble tasks, even ones they’re normally good at.

When taken purely as a dungeon crawling RPG and weighed up against the best of its genre – old and new – The Legacy shines. It’s well designed, creative, and fun. There’s a lot to sink your teeth into, and enough freedom to approach most common problems from a more imaginative angle.  Being able to save anywhere gives you the freedom to experiment or accidentally wander into a deadly trap without having any unfortunate events unravel hours and hours of hard work too.

If The Legacy had left it there then it would have been a a great example of its genre with a modern twist.

But it didn’t leave it there: The Legacy is also a fantastic horror game too. 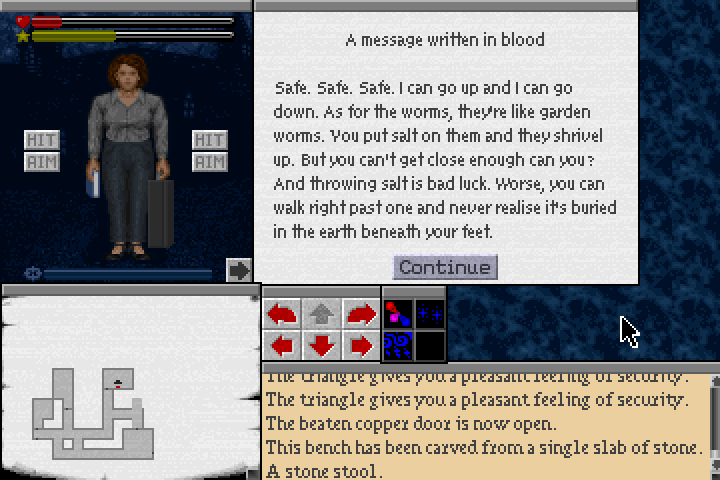 Your avatar is consciously a very ordinary individual, the eight choices available encompassing everything from sporty teenagers to balding professors and evenly split between men and women. Their starting stats are by default distributed along obvious lines – the army major’s naturally going to be better with firearms than an investigative journalist – but you can throw those out and alter them to suit your own preferences before heading into the mansion if you wish. Regardless of their background or how good they are at anything one thing’s for sure – they’ve never been locked inside a building crawling with supernatural entities before, and so the first time any of them catch sight of even a basic green-skinned zombie in the distance they’ll audibly scream in terror (their character portrait’s expression will change to match too), which may paralyse them with fear or even cause them to take a few steps back. More than just making your character act like less like a key-carrying robot this behaviour is something of a mirror held up to your own experiences with the game: At first you’ll see something unknown in the distance and approach with caution, unsure if it’s going to kill you off with ease or ignore you completely. Over time you – and your character – naturally become more confident handling the “standard” horrors within the mansion, calmly blasting them with fireballs from a distance or casually ducking into an empty side room without fear, until eventually not even the sudden appearance of a freshly-severed head will prompt much of a reaction for either of you.

But when you’re not afraid of the monsters, what horror’s left? There’s the constant gnawing fear you may find yourself defenseless, close to death, and unable to do anything about it; lost in a one-way trap in an unexplored part of the stone-clad basement. It’s possible to exhaust what could have been life-saving supplies on repeated failed attempts, making using them something to be done when you’re out of options rather than a few assured button clicks to keep you topped up when you’re running a bit low. You may find yourself blindly stumbling into the ethereal plane, an endless blue nightmare filled with monsters and portals or walk past a locked door and hear someone knock from the other side.

The Legacy is a wonderful example of incredible ambition backed up by good design; always tough, tense, and fair even though there are so many ways for the game to throw a deadly spanner in the works without warning. You’re plunged into a world where fresh blood pools on the floor, notes tell of demonic summonings spanning time and space itself, and even something as simple as opening a door could unleash a terrible monster – and yet when you’re playing the only thing you want to do is press on and try your hardest to unravel this compelling mystery.

[Ko-fi supporters read this a week ago! Thank you for your help!]

2 thoughts on “Home is where the horror is”