What do you get when Hudson Soft, the developers of the Nectaris (AKA: Military Madness) series, are given the keys to Intelligent Systems’ Famicom/Super Famicom/Game Boy Wars?

There’s your little cluster of buildings. There are the enemy’s. Each side has to shoot and shell their way across the map, soldiers taking over any buildings or facilities they find as they go.

You know you’ve seen and done this all before.

And that means you already know how much fun it is too. 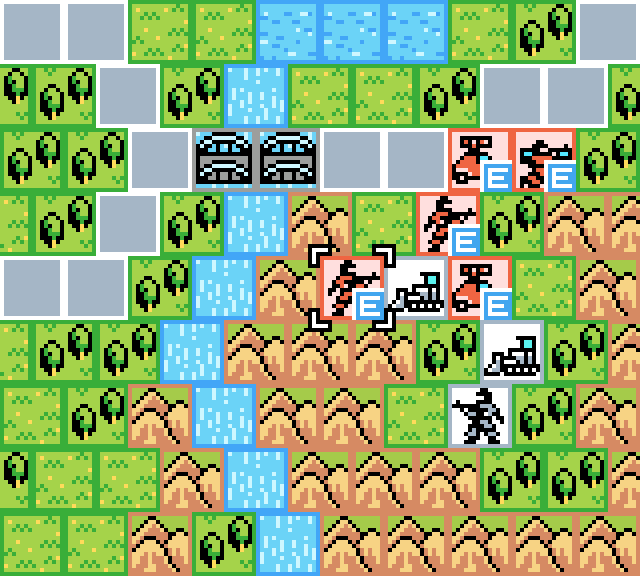 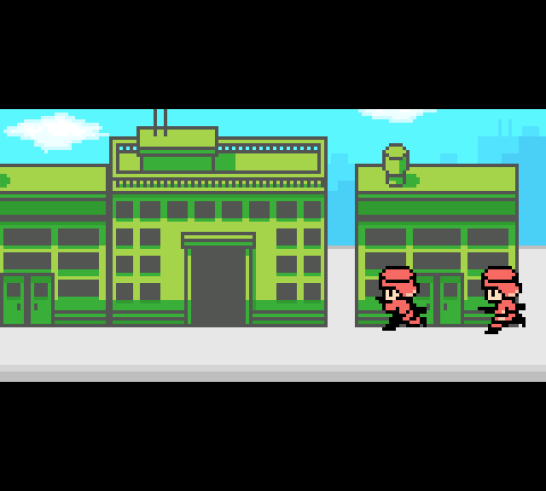 Beginner features sixteen stages to dip in and out of at will, each one intended to teach players some important aspect of successful Wars-ing. Brilliantly this entirely optional mode assumes no prior knowledge of the series whatsoever, and begins with you asked to do nothing more than create a single Red Star infantry unit, march them over to the nearby (and forever completely defenseless) White Moon base, and take it over. With that out of the way this brief mode then goes on to cover all the topics you’d hope it would, leaving newcomers with practical experience of everything they need to know – and if anyone is still struggling after all that, or simply wants to double-check a particular rule or unit statistic, then the well annotated, full colour, sixty-four page manual included in the box is more than happy to explain using screenshots, diagrams, organised tables, or some helpful combination of all three.

With those either successfully cleared, casually investigated, or ignored completely players can then turn their attention to Campaign Mode’s forty-five linear stages of tactical action. Here any units that survive one map automatically carry over to the next and can even be summoned for free with full health and ammo from any valid starting point; the one caveat is that this uses up the chosen facility’s turn, preventing you from thoughtlessly dumping vast quantities of potentially higher-rank (running from D to S) troops on the battlefield from the get-go.

Finally there’s Standard Mode; offering a further sixty independent stages of War-sy Wars-ing to while away the hours with – and you don’t even have to worry about getting caught out in the middle of an epic clash either as not only can you save the game whenever you’re in control, but GB Wars 3 itself silently creates a temporary save at the beginning of each “day” (read: turn), so even if you do have to shut the game off without warning or your battery suddenly dies you never stand to lose more than a few minutes of play even if the very worst should happen.

And if that somehow still doesn’t sound like enough content Edit Mode, accessible from the main menu at any time, enables players to easily create their very own maps and save up to ten of them for future use. For something so fully-featured it’s incredibly intuitive to use, everything from terrain types to the full range of buildings and factories just a few button presses away and quickly “painted” onto the blank sea-covered canvas you’re presented with. 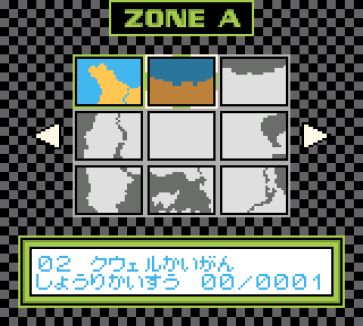 Of course a lot of that’s just Wars being Wars, more or less the same as it’s always has been since its 1988 Famicom debut; what makes this Game Boy title stand out even in 2021 is that it also has a few clever ideas of its very own, features that either weren’t part of the core series at the time or that remain unique to this day. The unmissable (if now completely obsolete) one is the game’s compatibility with Nintendo’s paid-for online service, Mobile System GB. Most famously used with Japanese copies of Pokémon Crystal (and looking at this list, barely a handful of other titles), this optional online component gave users the opportunity to download new battle maps (as far as I can gather these were official Hudson Soft efforts, not user created uploads), gain access to a special restricted-use troop type, and access game-relevant messages too. In-game the biggest fundamental difference is the use of offset tiles for GB Wars 3’s maps rather than the series-standard square grid, effectively giving the game a hex-based movement system without the actual hexes (Gaia no Monshou is another unrelated example of this style). This detail alone creates a range of exciting positional possibilities, all further enhanced by GB Wars 3’s “zone of control” rule: If two opposing squads are within one tile of each other then their movement ranges are greatly reduced even if the tiles they’re trying to move into aren’t occupied, giving each side little choice but to either engage in combat or painfully – and dangerously – inch their way past. Complimenting this are the “siege” rules – if a friendly unit attacks an enemy when another ally is standing within their Zone of Control on an opposite side they’ll do increased damage. Then there’s initiative to consider as well: A soldier or vehicle that attacks (or has to defend itself) before moving suffers no loss of initiative, and is therefore more likely to fire before their opponent, potentially dishing out fatal damage before the other side’s fired a single shot.

What these tweaks do is more than make simple things more complicated, they create strategic opportunities where there once were none, giving units that would traditionally be at a disadvantage or even hopelessly outclassed a chance to stop a powerful tank from zooming straight across the map, or to launch an unexpectedly effective attack on an armoured target far above and beyond what their on-paper stats would suggest they were capable of. 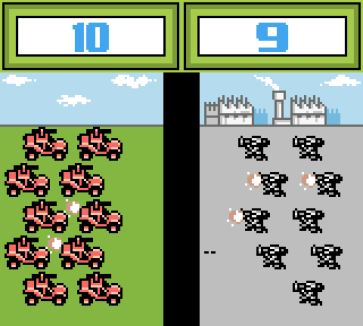 Game Boy Wars 3’s an interesting game down to its very bones, perfectly recreating all of those entertaining little wrinkles that naturally make series so enthralling in one pocketable translucent cartridge. It’s a very easy game to say “just one more go…” to and then find yourself losing an entire afternoon fighting out battles over land, sea, and air – using a whole heap of new and exclusive units of all types, including a construction vehicle that can fortify buildings, clear forests, and build roads – without even realising. It’s similarities to more popular entries give it the welcoming feel of a hug from an old friend and its differences create engaging tactical depth. You may already have, have had, or thanks to the wonders of emulation can play in the next five minutes, a better-looking game that plays vert much like this (handily containing by default an official English translation too), but that’s neither GB Wars 3’s fault or problem. Hudson’s take on the Wars formula remains an unmitigated success, a welcome experience regardless of age that somehow brings huge changes while still keeping everything the same.

[Want to read these posts a week early? Join my Ko-fi!]

2 thoughts on “More of the same, please”