Thanks to the incredible influence of a certain blue hedgehog every company – every company – that wasn’t Nintendo back in the Nineties was desperate to have a platforming mascot animal-ish character of their very own, usually a [Something] the [Something]. With attitude.

And Konami’s was Sparkster, the armour plated, rocket powered, tail swinging, opossum star of Rocket Knight Adventures. In keeping with similar efforts created at the time he looked almost nothing like the animal in question, could do plenty of things an opossum would never dream of doing, and his whole everything sounds a lot like design by pulling nouns out of a hat. He should’ve sunk without trace, consigned to the same scrapheap of mediocrity as the titular Titus the Fox, Zool: Ninja of the Nth Dimension, James Pond, and so many, many, more sharp-elbowed newcomers hoping to become The Next Big Thing. After all, if history has taught us anything it’s that you’re probably not missing out on much if you skip over any 16-bit era platformer starring an anthropomorphic animal.

And somehow the team at Konami made it all look so easy: Every scene of every stage contains unique challenges and fresh dangers in the form of anything from an undulating line of spikey balls to a do-or-die race to the exit against a stomping line of shield bearing robo-pigs. The game never stops being exciting or inventive even for a second – and never gives you a moment to catch your breath either. The first segment of the first stage alone sees Sparkster fighting pig-soldiers in cars, rocket-jumping at bipedal mechs, and then clashing with a tank on a bridge (which then collapses; plunging you both into a river, the fast-moving water leaving a convincing wake for both you and your enemy). This rollercoaster of a sequence is somehow crammed into comfortably under two minutes of gameplay, and that’s including the mid-boss’ final explosion and the briefest fade to black before the next scene – one that includes a nonstop flight across the water that only ends after a battle with a large snake-like robot and Sparkster flying head-first through a castle wall – comes into view.

But volume alone does not a good game make, not even when that volume includes pig-soldiers that run away in a blind panic wearing nothing but their underpants if you hit them or the background of the first screen of the first stage going to the trouble of showing the first stage’s final boss attacking the castle you’ll shortly be jet-boosting your way through as well as the giant pink airship (which you’ll discover later is also the fourth stage of the game) carrying your evil rival opossum Axel coming in to land. What makes Rocket Knight Adventures’ densely-packed action so great is that every thrilling mini set piece is always a prelude to something even more exciting, every victory proof of a skill learned that will be pushed even further the next time those precise jumps, tail-hanging, and well-timed rocket boosts are called upon. The game always wants to outdo itself – to impress – your next encounter with a practised mechanic always that little bit more extreme than the last until you’re taking part in a mini Gradius boss rush remake or forced to fight while hanging horizontally off a pole, one side of the room constantly sucking all the air out into the guaranteed instant-death of outer space – and because the game’s so very smoothly ratcheted up its requests, so expertly taught its players how to handle new problems before they’ve even come up – you take every increasingly outlandish scenario in your stride. 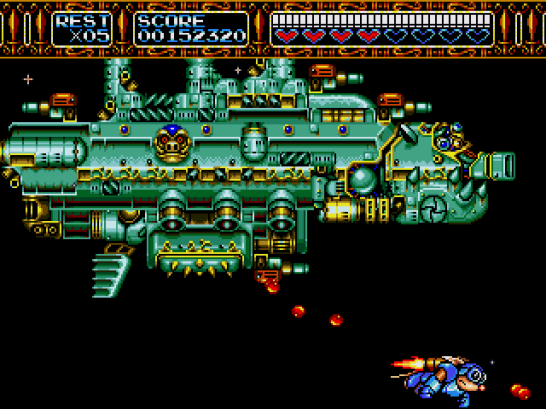 As challenging as it can be at times – Rocket Knight Adventures is not afraid of adding a few instant kill conditions if doing so would set the player’s heart racing – this is a game that never intends to intimidate, not even when a screen-sized boss is making a dramatic entrance and some deliciously grimy chiptune battle music kicks in. What it does instead is use cinematic flourishes cleverly combined with slapstick comedy to give Sparkster’s struggles context, continuity, and a sort of emotional levity: “Hey, it’s not that serious” says the game as it dedicates an extraordinarily indulgent amount of time to a visual gag involving a common enemy hiding inside an enormous wrapped present or plunges a mine cart through a hen house at high speed with predictably feathery results. And so even when an oversized robo-fish semi-submerged in lava sprays painful pellets (and the odd banana) everywhere or you find yourself engaged in a gigantic mecha fist fight or navigating a maze of glowing spikes on a tiny floating platform you always know exactly how you got into that situation, you can always follow the thread backwards and use what you’ve seen and done to build up a better reason for your current difficulties than “I guess someone wanted to build a tricky jumping section“. The game even goes so far as to offer an infinite supply of extra lives immediately before a few instant kill hazards, giving players the chance to learn how they work without penalty.

Rocket Knight Adventures is a lot of things (“unported” is sadly an obvious one) but if we had to pick just one word to describe the game it’d have to be “complete”. This is a game that takes one very good idea – what happens if we strap a rocket pack onto an action game hero? – and then teases that happy thought out in every imaginable way and a few more besides, as if the developers feared they’d never get to make another game ever again and decided it was best to shove as many good ideas as possible into this one. It stands out from the crowd even two unrelated sequels, a reboot, and several decades later thanks to its entertaining mix of welcoming showmanship and perfectly tuned action, and also serves as a reminder that the mascot platformer subgenre could in the right hands offer creative and desirable experiences a world away from not only the crushingly middling ordeals expected of these bland merchandise-shovelled wannabes but even, depending on your preferences, outshine Sega’s quilled speedster.

One thought on “Rocket-powered platforming”