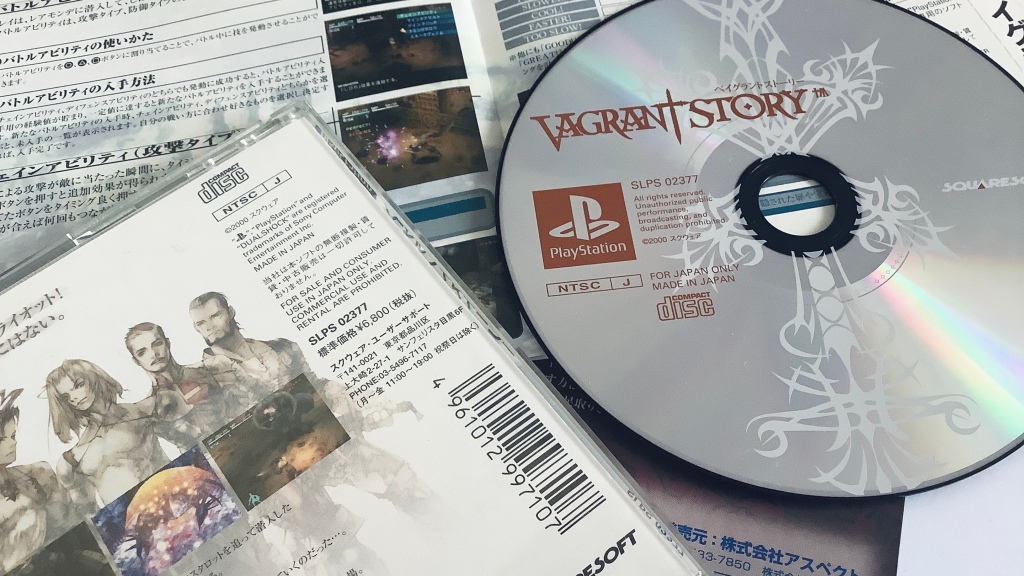 You know when I started my latest playthrough of Vagrant Story the original plan was to use this refresher to discuss its masterful (and arguably unbeaten to this day) use of light, shadow, and colour to convey mood, time, and temperature, to wax lyrical about how it wields texture and sound to create a “real” abandoned place out of nothing more than square rooms decorated with painted-on features. So detailed and considered is the game in this regard you can almost feel how smooth the cold stone walls of its underground labyrinths are, how warm the afternoon sun is as you recuperate in the relative safety of the town centre, the slight frisson in the air as you explore the Dark-drenched blues of Undercity. Every single tiny flame in every crumbling alcove has been placed with utmost care, gloriously culminating in that final room in the cathedral, bedecked with candles and stained with fresh blood, the one that almost feels like a farewell to the light.

I believe everything I’ve just said with all my heart, and a thousand other happy words I could have written on the subject too.

But Vagrant Story, in spite of its confusing UI and the weird insistence by some vocal fans that tedious min-maxing affinity-obsessed play is the only way to go, is not a game short of praise.

So I’ve decided for now to talk about another aspect of it instead, one that seems to get glossed over by some and never reached by many, one that has once again leapt out of thin air and gummed up what was until that point such a smooth and enjoyable experience: That One Weird Stretch about two thirds of the way through where bugger all happens and nobody would miss it if it was gone, the part where an ambitious and beautiful game out of time and budget had to very obviously cut corners, removing – according to Matsuno himself – everything from AI-controlled partners (the shadow of which can still be seen in Ashley and Sydney’s battle with Grissom) to what he claims to be over half of the original plot. 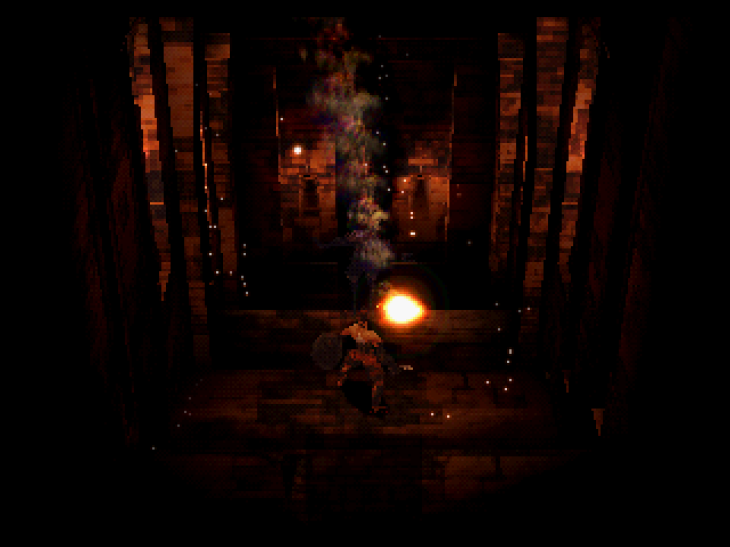 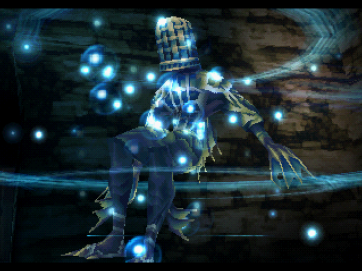 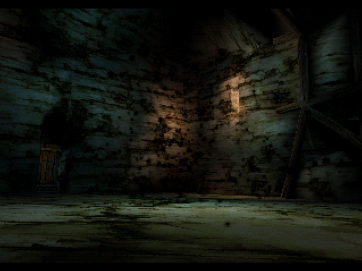 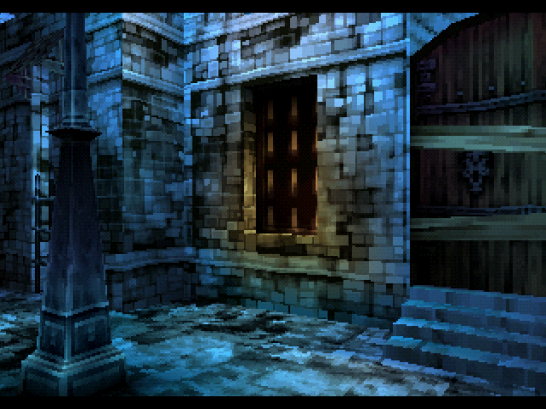 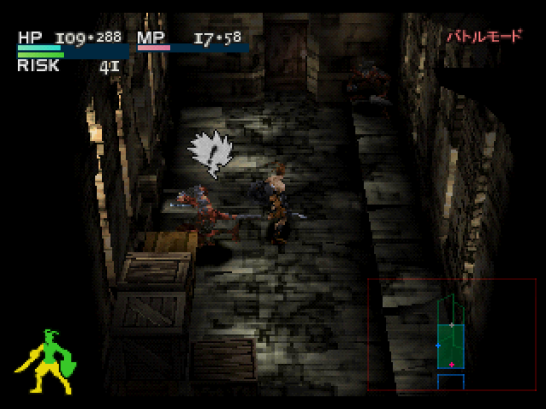 Desperate times call for desperate measures and sometimes all any team can do, regardless of their creative intent or how understanding their deadline-extending producers may be, is stitch everything that’s in a shippable state together and get the game out the door. Vagrant Story is of course not the first game to ever suffer from these issues – Soul Reaver‘s another famously unfinished game from the same era and most of From Software’s modern games are crawling with irresistible remnants of half-formed places that never came to be – but it is one of the few where the cut feels so clean and conspicuous, where it’s not just a mysterious item with no programmed use, a door that never unlocks, or a plot thread unresolved, but a real salvage operation, where what had previously been such a crisp and polished design briefly becomes a rough unfinished mumble of an outline.

The break occurs just after Ashley defeats the Sky Dragon, triggering the scene where he’s aware of Callo Merlose thinking of him, wondering if he’s even alive. From there we move to see her having an extensive chat with her captor Hardin and using her newfound powers to force answers about their plans for Leá Monde, and Duke Bardorba’s connection to it, out of him; a fascinating conversation which had been recently preceded by epic clashes with apparent former ally Jan Rosencrantz, and before that by a brief team-up with Sydney himself, and before that by multiple cutscenes showing Ashley’s awakening powers as he unwittingly slipped into Samantha’s mind and witnessed Romeo Guildenstern’s machinations through her eyes, and bef-… the point is, right up until this moment Vagrant Story had been consistently shepherding the player along one clear and frequently updated path, doing its Metroid-ish best to make adventurers feel like slightly lost explorers while still always ensuring they were gently guided down the correct path.

And then all of a sudden… nothing.

Not the “nothing” of a game giving you a little breathing room for contrast after hours of pushing you through claustrophobic tunnels, nor the more bewildering sort of “nothing” that comes from being suddenly able to use a multitude of abilities in ingenious ways to bravely explore the hypothetical unlocked world before you, but an almost complete absence of the careful design that had made the previous hours such an enthralling delight (Snowfly Forest excepted).

In practise this means you find yourself eventually fighting a couple of ordinary (albeit dangerous) enemies masquerading as midbosses in quick succession in identical square rooms – one of which, without any dialogue, reason, or explanation beyond a short piece of text in the space the UI normally reserves for “The door is locked” style messages, directly grants Ashley the utterly monumental game-changing ability to freely warp between previously discovered save points at will, the MP cost determined by his current distance away from his chosen destination. For a game so concerned with fine detail it bothers to animate subtle changes in facial expression using animated textures during cutscenes (on a console where “They gave the lead an index finger and a triangular nose!” was considered impressive) and has lore so rich item descriptions will tell you exactly which fire god’s tongue stud you now own as well as tales of sad fates and unfulfilled potential, a game that notably teaches every other spell via an inventory-selected grimoire and new abilities via awakened memories, this is a jarring departure from its own pre-established standards and a pretty clear sign something’s not quite right. 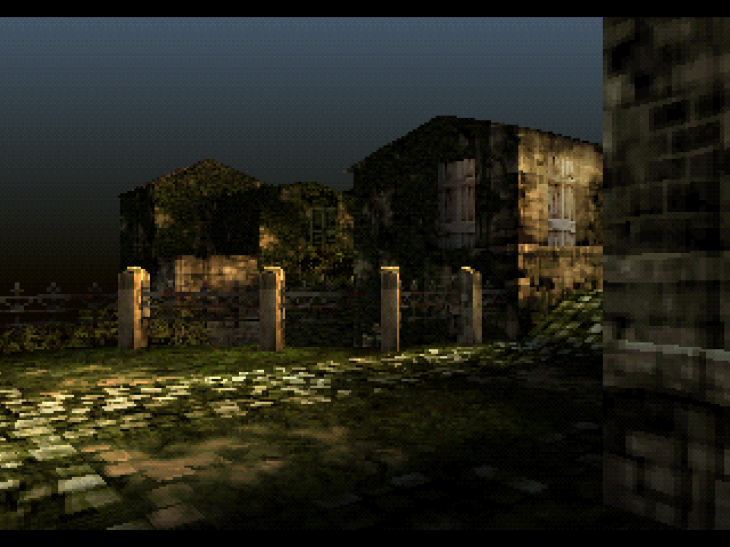 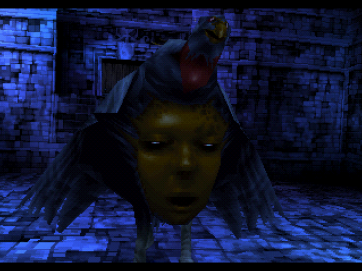 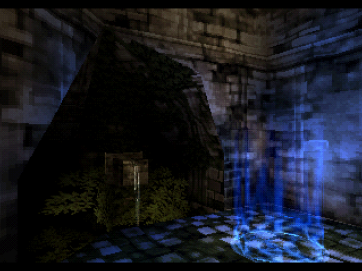 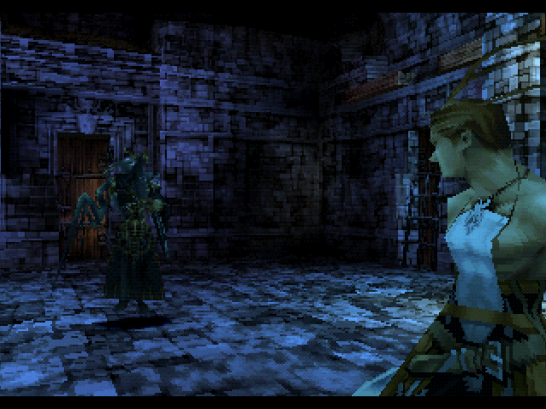 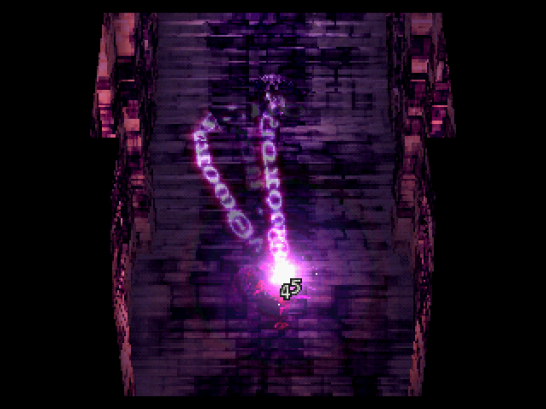 You find yourself in possession of everything and nothing, suddenly given the chance to go anywhere you’ve already been but with no understanding of why you should or if you even need to, while still assuming you probably need to press on ahead but with no particular path unlocked or general direction in mind; Sydney doesn’t charismatically appear goading Ashley to pursue him to anywhere in particular and there is no suggestion selected older locations are no longer an essential part of your progress either, no ominous warning of the Dark forcing you onwards or a sudden influx of Guildenstern’s troops making clear that still-locked door from two hours ago is something best left to the foolhardy or the over-prepared. The silence here is deafening.

To make matters worse sigils – Vagrant Story’s key equivalent – previously found and used in or close to wherever they were needed without warning briefly become awkwardly distributed progress-halting item hunts. Most egregious of all is the Aster sigil, available from a chest in a dead end in Undercity East – but not that Undercity East, not the one you’ve already visited – this is a completely disconnected cul-de-sac of Undercity East that doesn’t show up at all on the map unless you’re already in it, that’s only accessible via one specific town entrance (itself already a warren of locked doors you can’t go through right now, although again you will not know this at the time), that you have no reason to assume even exists and requires a completely different single-use sigil found in Undercity West to enter. Oh and let’s not forget the chest containing the Aster sigil has a hidden damage tile placed directly before it, left there presumably purely to add injury to insult seeing as this is a game where trapped chests are a relative rarity rather than the norm. Where do you need to use this precious magical door-opener? In the Limestone Quarry, accessed via Undercity West. The whole sorry scenario’s an enthusiasm demolishing back-and-forth-and-back-again slog spanning a minimum of five areas (town, town walls – which are distinct maps separate from the town, which is itself divided into south/east/west portions already – and three different undercity maps) even if you already know exactly what you’re doing. I wouldn’t blame anyone for putting it down here, lost in a tangle of area-switching doors, dead-ends, and irritating groups of enemies able to cast (or not – you won’t know until it’s too late) devastating instant-kill attacks.

But of course this is Vagrant Story, and even this fumble can’t set it back forever. Those that do make it to this unavoidable low point and out the other side have the Temple of Kiltia and the Grand Cathedral itself to look forward to, both stunning pieces of digital architecture that bar a few too many block-pushing puzzles are not only a solid return to form but also one of the definitive highlights of the entire PlayStation library.

So why spend all of this time moaning about something I readily admit is a temporary blip? Why not focus on all the good, why not write that article about the game’s gorgeous scenery instead?

Because talking about a real problem isn’t the same thing as stirring up negativity for the purpose of generating hate-clicks or dragging something down for the supposed “fun” of it (just for the record: Neither here nor on my Ko-fi do I receive any form of click or ad-based compensation – it’s literally Ko-fi donations or nothing for me). Because by taking something apart, by identifying what went wrong, we can gain a greater understanding of how it should work – how it usually works – and then use that newfound insight to make educated guesses as to who was going to fight by Ashley’s side, what we might have seen and done if everything had gone to plan, and what these places were originally intended for. If we can see what it took to make what’s here almost work then we can learn to appreciate the hard work it took just to reach this briefly semi-broken state and how much of a struggle it is to make anything at all.

But mostly because if the games we love – and I do love Vagrant Story – are truly as good as we believe they are then they will not fall to pieces or lose their precious indefinable magic the instant we offer honest, well-intentioned, critique. If the emperor is underneath it all a good, kind, and just ruler then pointing out he is wearing no clothes is nothing more than a simple fact, not a grand unravelling of his position and personality. It is not a personal failing nor a reflection on us if the chosen focus of our adoration isn’t perfect, and our love is no less sincere for pointing out when and how things sometimes go wrong. Vagrant Story’s got an inarguable hole in it, a short but significant chunk of the game where for whatever the reason – and there are usually very good reasons why these things happen – players are left fumbling in the dark through a deeply tedious and woolly section. That’s not fine but it is true.

A truly flawless game is an artificial concept, an impossible and unworkable ideal that is forever unfinished. Vagrant Story, warts and all, is real – and the hobby’s better for having it exactly as it is.

[Ko-fi supporters read this last week! Why not join them?]

4 thoughts on “Love for the broken”