We’ve had manga based on video games for about as long as we’ve had video games full stop (and now I’m wondering if Space Invaders ever had its own adaptation…), but for all the differences in their source material and artistic handling they tend to fall into one of four categories: They can be a safely straightforward adaptation of the game’s plot, some a sort of “The further adventures of…” semi-canonical tale, completely made up (for better or worse), or they might follow in the footsteps of the Final Fantasy XII manga, and by that I mean they might be awful and unfinished (yes I am still bitter).

This Tactics Ogre manga, released in four parts between March 2000 and November 2001, is the straightforward adaptation sort, based on (the pre-PSP version of) the game’s Law route. Looking at the alternatives listed above it’s the only game-to-manga treatment that makes sense, as continuing the plot threads laid out in the game runs the very real risk of accidentally treading on another Ogre Battle‘s toes, and inventing a whole new story in a setting like this isn’t the sort of thing that’s easily done no matter how big of a fan someone may be of Denam and his friends (or “friends”, depending on your choices). 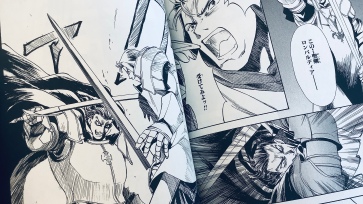 The manga’s astonishingly accurate at times, with some scenes mirroring not only the general content but even the staging of their game equivalents perfectly, showing the right people sitting in the right chairs in the right room of a specific castle as if the author, Hiro Matsuba, had taken a prodigious quantity of screenshots beforehand and then treated them as storyboards. This impressive attention to detail also extends to more minor details too: Stones are thrown at distant targets, gems are used to make hasty magical retreats, and characters classes are immediately recognisable purely by the look of their armour and equipment. There’s a lot of Tactics Ogre in here beyond the oaths warring factions shout at each other on the battlefield or the schemes that quietly unfold behind closed doors, and you do feel that Matsuba either bothered to do some genuine research before sitting down to plan this out or had fond memories of playing the game themselves. When the story inevitably veers away from actual events for the sake of the action and the page count it still makes an admirable attempt to draw as much as it can from the game’s lore and mechanics, leading to segments where wizards call forth devastating ice magic before the physically vulnerable caster ends up killed by a well-placed arrow (as wizards should) to mention of healing leaves, levels (written with more subtlety than I have the space to explain it here), and Nightmare spells forcing people to sleep.

Characters are represented faithfully in a broad-brush kind of way: Denam is the conflicted hero forced to live with a terrible decision he wish he didn’t have to make, Canopus is exactly as cool as a bare-chested battle-hardened birdma-sorry, Vartan should be, and as the manga goes on Leonar becomes frustrated with Duke Ronwey’s decisions to the point of turning his sword on his leader. Vyce feels more absent than you’d think he would (and perhaps should) be throughout this retelling, presumably another practical omission to try and help keep the manga on schedule. Arycelle however does make a strong appearance, riddled with grief and anger over the death of her brother as part of the Balmamusa massacre, although here she holds onto that rage, unable and unwilling to pursue anything but revenge until she eventually falls to Denam’s blade after his repeated pleas for them to find a less fatal solution.

It’s all looking pretty good on the personality front… until you get to Catiua. Oh dear. She’s just awful, even when judged against her already creepy/whiney/clingy behaviour displayed to varying degrees in every version of the game. She’s a high-maintenance drama queen who stomps all over every scene she’s in, constantly crying over Denam and/or failing to be a competent healer – even in those moments when her precious brother’s severely injured and could really use some magical succour; her awareness of her personal failings prompting another round of tears, shaking, and vocalisation of her fear of being left alone. She never learns of her past or ascends to the throne in this version of events, she never becomes anything greater than Denam’s Problem. During one of these many incidents she receives a deserved slap from Sara – it unfortunately doesn’t help Catiua snap out of her self-absorbed crybaby state, but as a reader I did feel relieved that at least someone had taken her to task over her one-note attitude. 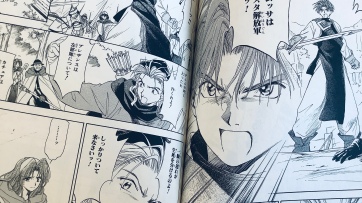 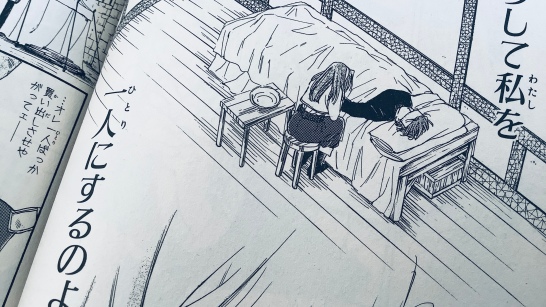 Of course these emotional outbursts are all taking place during a bloody war for freedom, a war where the Pavel siblings and just about everyone else they meet have already lost anyone they ever held dear to violent ends, and to a certain extent her feelings and (lack of) actions are justified. Who wouldn’t be afraid? Who wouldn’t cry? Who wouldn’t ask their sole surviving family member if they really had to fight? The issue with Catiua is that every battle sees her do something stupid that puts Denam in greater danger or forces him to protect her, every problem calling forth little more than a flood of fresh tears. She’s a clear liability to those relying on the skills she obviously has to keep them alive and the manga only makes things worse by dedicating far too much space to her; the intent may have been to show another side of the war-coin, that not everyone can or ever should have to adapt to the terrors of the battlefield, but in practise she instead comes across as nothing more than an obnoxious millstone around the Resistance’s neck.

Thankfully she’s the only real negative issue here, and in all other regards this is an easily-digested take on a complicated story, enhanced by consistently accomplished artwork. Unusual (and harder to draw) angles and dynamic linework are frequently employed to give scenes a sense of grand scale, visual interest, or heightened emotion, and every castle wall, leather belt, and shining jewel has depth and texture to it. Battles are kinetic and brutal, echoing the game’s unflinching and unsentimental attitude towards conflict and the concept of “heroes” well. There are no filler panels here, no scrappy poses where someone looks off-model or noticeably out of proportion, no chapters that feel rushed to meet a deadline.

If you can read the text – unfortunately there only seems to be an incomplete English scanlation online and as far as I can tell it’s never been reprinted or made available digitally in Japanese, making second-hand purchases your only real option – you’re in for a solid if simplified reconstruction of a complex web of events, a practical adaptation that by and large reads well and perhaps most important of all finished what it started.

[Ko-fi support makes the magic happen – and helpers get to read these articles a week early! Thank you everyone!]