One of the joys of buying strange little Japanese PlayStation games in particular is that you never quite know what you’re going to get: Maybe you’ll end up owning an(other) adventure game or train driving sim, or maybe you’ll end up riding hot air balloons over impossible landscapes or blasting away in zodiac themed tunnel shmups.

Maybe you’ll end up with Tokyo Insect Zoo, a self-described “Playing Movie Game” loosely based on the Japanese children’s book “Ryo no Kabutomushi Ryokou” that mixes first-person 3D exploration with 2D chatting and beautifully FMV sequences by Studio Pierrot, known for animating many famous shows including Naruto, Urusei Yatsura, the 1996 Sonic the Hedgehog OVA, and my childhood favourite, The Mysterious Cities of Gold. 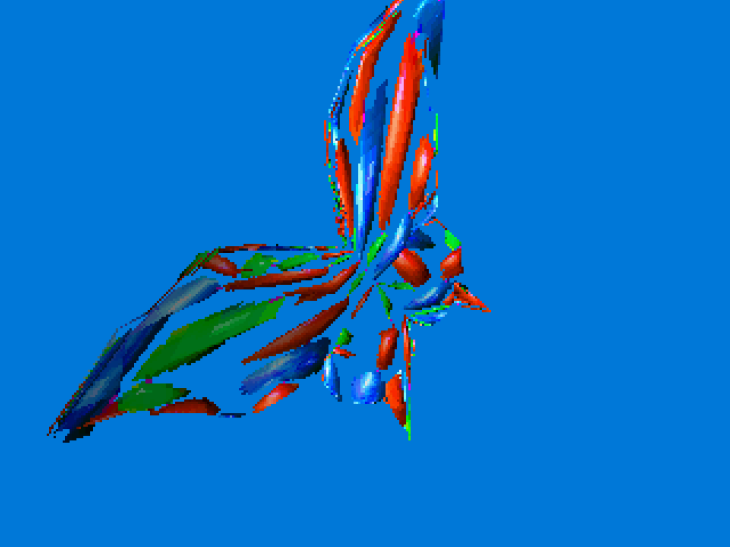 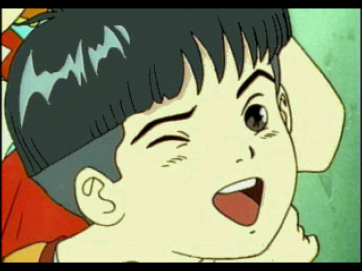 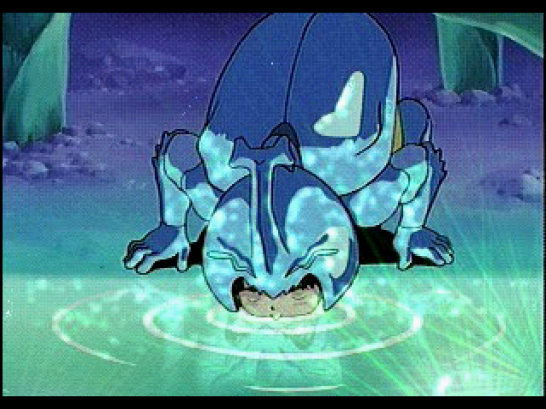 Leading boy Ryo’s adventure starts off ordinarily enough – you’ll meet his friends, family, and before long a mysterious young woman who turns him into a bug for reasons that aren’t immediately obvious – and then…

Well, no. Not quite. Tokyo Insect Zoo actually opens with a polygonal shape floating high in the sky that you morph using the controller’s shoulder buttons into various shapes – a globe, a butterfly – textures changing and shape shifting until it becomes a… a basketball, which then falls to the ground below, and then the game begins, swapping frantically back and forth between (very well made) FMV sequences and tiny 3D sections representing Ryo’s human surroundings until he magically becomes a bug and then…? And then the game begins, maybe?

And then the game offers you inky nothingness, images of glowy… things and insect larva floating in front of Ryo’s eyes (and your camera). You then “walk” towards a huge image of a beetle, which then fades into an image of the mysterious girl from before, and then, at last, does the game finally start for real, Insect-Ryo finally ready to make some strange friends in a strange insect-y land.

You know that feeling when you accidentally flip over too many pages in a book, or select the wrong next episode of a TV show? Tokyo Insect Zoo is like that all the time. On purpose. 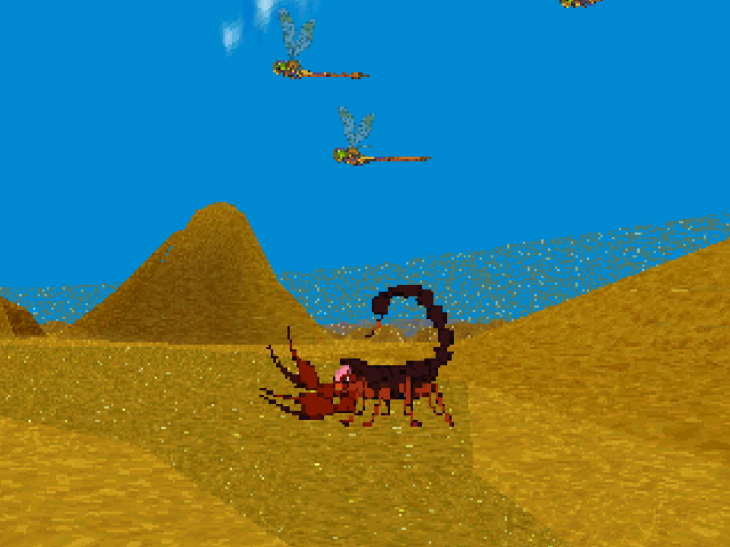 This discombobulation is only exacerbated by the game’s refusal to use text. At all. For anything. Even the save screen – not that you’d know it’s the save screen unless you read the manual beforehand, because there’s no text – uses images of bugs and bug cages and whoever happened to be on-screen looking at when you made the save (saves can only be made during conversations – no conversation, no saving) instead of something as practical as “Save 1: 1hr17min”. The lack of text means that all conversations are fully voiced, the game using a simple selection of large still faces with a range of low/no animated eyes and mouths placed on top to show people (more often insect-people) talking. You’d imagine the use of hand-drawn artwork and speech would be a positive here but unfortunately the almost-anime look coupled with extremely limited movement is more likely to bring to mind the recycled stock footage used in old cheap cartoons than anything else.

You’re expected to direct the flow of these friendly chats by pressing shoulder buttons to trigger potential dialogue and then press the circle button to choose which line you react to/progress from. Depending on the event playing out at the time and “thanks” to the lack of a simple text list you may end up with each these buttons mapped to individual characters, split unevenly across two or three, or offering one character multiple potential responses, their face snapping between emotions with every exploratory button press. The effect is a bit like getting caught up in three different phone calls at once, and made worse by the way many conversations keep flitting back and forth between close-up shots of single people every time they open their mouths, even if it’s only for a solitary “Whoa~!” or similar reaction.

The interactive 3D sequences make no more sense, events triggered by wandering around and hopefully catching the right unmarked place to be. In theory other characters will at times call out to you – straightforward “Over here!”s and so on – the only problem is you can’t actually see them, ever, and their voices don’t for example become louder when you get closer or offer any more descriptive help than “This way!“. Beautifully animated cutscenes showing Ryo and friends stumbling upon a gigantic watermelon (and some other bugs less keen on sharing it) revert to honestly generic 3D maps with no juicy fruit or anyone else in sight, shearing any connection to be had between your own actions and the adventure Ryo is supposedly having. There are sprawling multi-level ducts you’re forced to navigate to reach new areas of the titular insect zoo, none of them letting you know where you need to go, or even where you’ve already been. Fans in these samey labyrinths will not just push you backwards but send you whirling away with no chance of getting your bearing, as the game has neither a compass or a map. To make matters worse the not-fantastic collision detection sometimes allows you to pass straight through fans and grates even though you normally can’t – and sometimes gets you stuck on the one “other” kind of grate that marks an exit from the area, preventing you from passing through to the other side until you’ve brushed up against it from several slightly different angles.

Buried beneath all of this jarring nonsense is a rather sweet plot about a regular young boy who becomes an insect, makes insect friends, and then loses them all as the zoo – their home – is shut down, they die, and he returns to human form – but good luck making it to the end of a game with five different control schemes, a game that at one point has you manually opening and then flapping individual wings to reach “space” (what appears to be a starry ceiling in the zoo, complete with dangling stars and planets), flying past this looping visual noise and into a strange tunnel segment where you must avoid incoming stars and asteroids. I did clear this segment, but I honestly couldn’t tell you how. The disjointed weirdness within Tokyo Insect Zoo, found in everything from just trying to talk to another character to walking around, isn’t a surprising and experimental journey of discovery but a barrier between the game and the person playing it; what’s the point in even trying to engage at all when the rules change from one scene to the next, when anything of real importance only happens when I put the controller down?

In spite of its issues the game’s not without a certain charm: The anthropomorphized bug designs are cute and the cast’s enthusiasm for and wonder at the strange world around them feels sincere. There are even brief flashes where it does feels like you’re a kid in a world of insects, others busily hopping around and getting on with whatever it is bug’s go as you walk straight through another identical green leaf, but it’s all far too obtuse to enjoy playing and the story, even if you exclude the weird and largely inconsequential 3D segments, is poorly told.

[Ko-fi supporters made this post a reality! Thank you so, so, much for everything!]