As you may have already guessed from the photo above, the overly-named Bomberman: Panic Bomber is yet another spinoff of Hudson’s evergreen Bomberman franchise – this time a puzzle game where little Bomber-heads fall from the top of the screen in L-shaped clusters of three, the aim being to line up a trio or more of the same colour in vertical, horizontal, or diagonal lines to clear them from your playfield and hopefully make life difficult for your opponent in the process. Your little groups of beheaded Bombermen have gravity applied to them the instant they’ve landed, allowing you to strategically make a solitary piece or two fall off the side and connect to others below in ways that wouldn’t be possible if each segment retained its “L” shape – so far, so familiar.

Hudson weren’t going to have a Bomberman game without bombs though, were they? It’s literally in the name, after all. So to meet series expectations unlit bombs frequently fall from the top of the playfield in place of the standard faces or sometimes appear in neat lines from below, disposed of by setting them off – using typical Bomberman bomb-chain behaviour – with the lit red bombs that occasionally come your way. These (hopefully) screen-clearing explosions then produce comically burnt Bombermen junk blocks, which are then sent over to your opponent’s screen. Another kind of bomb – a gigantic one – appears only when you’ve filled a gauge sitting in the middle of the screen, powerful enough to not only destroy bombs but also blow away lots of little Bomber-heads too and anything else in the vicinity as well. 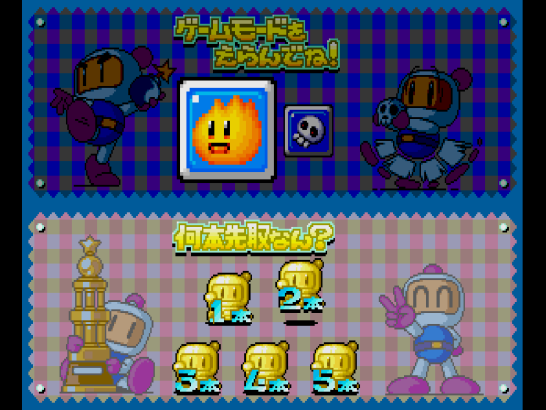 And that’s how Panic Bomber plays – and the source of all its biggest problems too. There’s no real synergy between the two halves of its puzzling whole; the block-combo’ing side of things feeling like they’re at best on polite nodding terms with the bombing game you’re also made to wrestle with, the two happening at the same time rather than together. The most fundamental block-destroying rules suffer a similar fate, the soft blobbiness of these groups of threes at odds with the rigid lines the game asks you to create, an awkward contradictory mash of Puyo Puyo‘s freeform gloopy shapes and Columns clean crystal formations. And that giant bomb I mentioned earlier? Good luck trying to eyeball the actual area of effect – it’s a large round thing in a world of square shapes that doesn’t fit within the clear grid pattern everything else does and its explosion, while entertaining the first few times it goes off, again doesn’t visually match the same restrictions that apply to all the other pieces. Even the “Next” box – that little notch in the top of the playfield is… well, Hudson of all developers damn well know better than this. The Next box, for some mystifying reason, occupies the exact same space your blocks drop from, causing a constant and avoidable state of mild confusion as the two routinely overlap. On top of that there’s also a strange “fuzzy” period when you first gain control of a cluster, your freshest set of three able to pass through the top edge of the playfield if you immediately move to the left or the right (if you wanted to do something as ordinary as… line up a combo as soon as possible, for example), temporarily hiding themselves from view in the process.

This fudged together buffet of discordant concepts and half-baked execution can be inflicted on you via three separate modes: Story, Multiplayer, and “The Path to Bomber Temple”. There’s a tutorial too, although it’s a conspicuously slender run through only the most basic rules and anyone interested in learning how everything actually works is better served by the colourful manual.

Let’s start with the good news: “The Path to Bomber Temple” is a single player challenge mode, throwing up a range of demands such as “Destroy five blocks!” “Create a two-chain combo!” and so on. It’s something a little different from the straightforward puzzling offered elsewhere, and a fresh twist on anything is always a welcome sight. Moving onto something more neutral: Multiplayer allows for up to five people to play together thanks to the PC Engine’s multitap, which would be great if only the game these people were playing was worth the effort and expense involved.

And then there’s story mode: The flagship way to play, the first choice on the main menu and the first thing you see on the back of the box, and… it hasn’t got a story. There’s a bit in the manual that’s given as much detail as any other puzzle game, there’s a very short ending after sixteen stages of puzzling, and that’s honestly it. There’s no chirpy mood-setting opening, none of the charming vs match intros that show the next strange opponent trying to intimidate poor Bomberman the way characters do in Puzzle Bobble 2 or Puyo Puyo Tetris 2‘s enjoyably daft conversations. Now of course nobody should be surprised or annoyed that a puzzle game isn’t filled with hours of elaborately written storytelling (and we really shouldn’t want them to be either), but it’s not unreasonable to expect a story mode to have a story, is it? 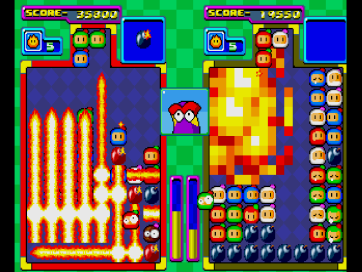 I have spent a great deal of time griping and whinging about Panic Bomber above but in spite of my numerous complaints it’s not an awful game by any means: it can’t be, because falling block style puzzle titles are usually at least fun for a bit no matter how well (or otherwise) they’re designed. But you never reach the point with this one where you feel skilful or excited, and for a game designed around battling CPU-controlled rivals there’s a distinct lack of personality to your opponents; the sort of thing that makes Super Puzzle Fighter II X (or its Monster Hunter-themed variant) such a joy even if the genre isn’t your usual fare. And this is by Hudson – the developers responsible in one way or another for so very many grea- no, more than that – historically significant titles on almost every format there’s ever been; making “Not awful but not exciting” is an incredibly frustrating thing to say about a game with Panic Bomber’s pedigree.

I suppose the silver lining is that at least Panic Bomber shows just how hard it is to make a good game in what seems to be such a “safe” and “simple” genre, and why some puzzles games stay around forever while others come and go before anyone really noticed they existed at all.

[This article wouldn’t exist without the support I receive via Ko-fi! Why not join in – and read everything a week early too?]