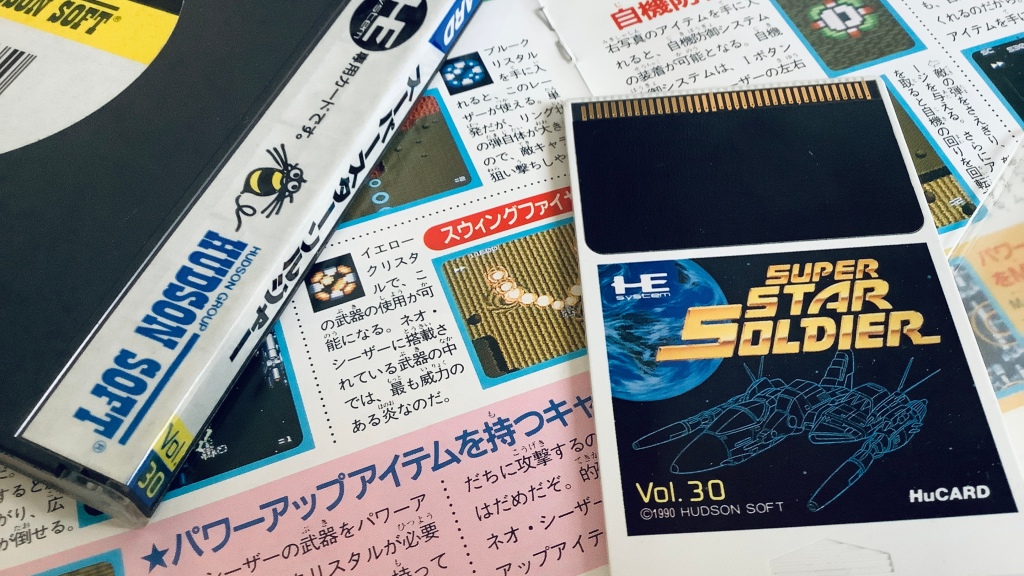 As someone who was introduced to the PC Engine via a string of Duos and vanilla PC Engines firmly attached to briefcase-like CD attachments (do have a quick look, they’re beautiful things) – a world of CD-stored speech, stunning cutscenes, and Nineties anime tie-ins – I always thought HuCards were a bit disappointing. They were the basic option to make do with before upgrading to the real thing in my ignorant eyes (a point of view that wasn’t exactly disproved by the system’s frankly massive CD based catalogue and comparatively thin selection of HuCards – imagine the Mega Drive/Mega CD libraries reversed), something to muck around with while I waited for Langrisser, Dracula X, or Galaxy Fraulein Yuna to drop through my letterbox.

It was Super Star Soldier, thankfully purchased early on in my PC Engine-ing, that made me realise just how wrong I was – that made me realise how much of the speed and spectacle found in all of the “better” games on their shiny platters I’d been fawning over had been down to the base console all along. Simply put: I love this shmup. It’s simple without being simplistic, a high-speed rush of a game within an older sort of shooting’s framework that never fails to feel bold and exciting – and while it’s not a shmup keen on constantly spraying bullets all over the screen it certainly doesn’t take any prisoners either. 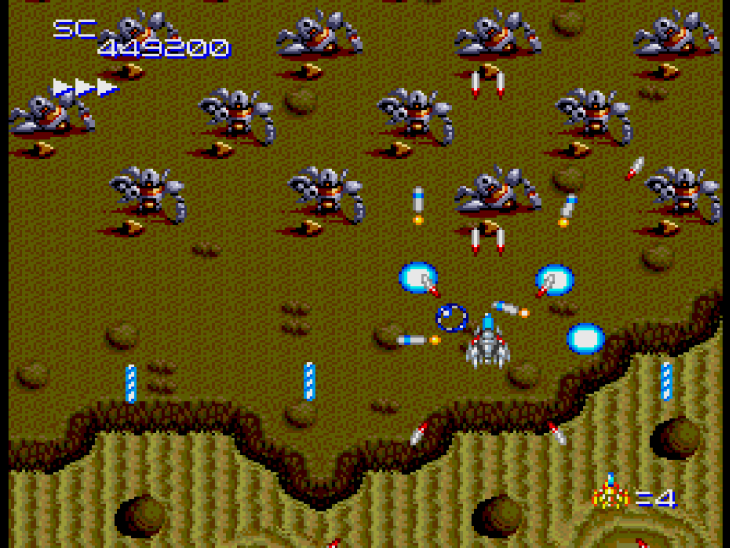 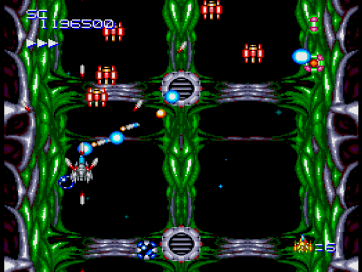 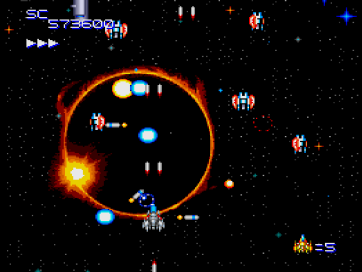 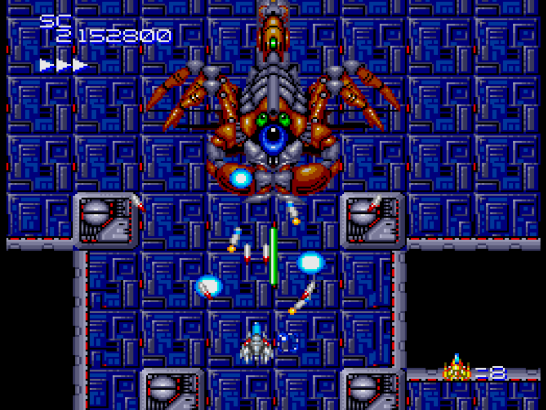 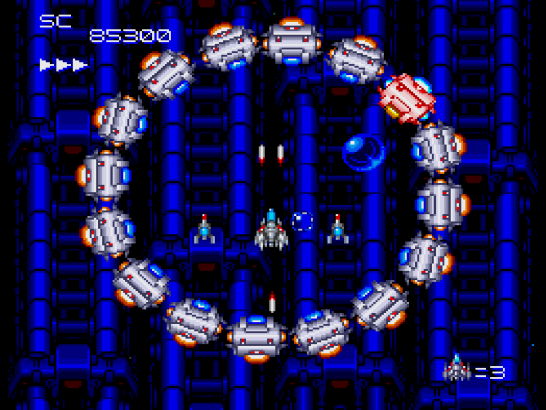 You become aware of this no-holds-barred attitude within seconds of starting the game, and it’s all thanks to the first object that lazily floats on screen – a small power-up carrying “helper” ship. It doesn’t look intimidating. It doesn’t shoot at you. It doesn’t really do much other than float downwards in a straight line. And then in that brief moment between you thinking “Oh, it was nice of them to start off with something harmless” and “I should probably shoot that” it suddenly gains a burst of speed and sweeps off the screen… and your starting position puts you right in its path, killing you both on contact if you haven’t yet got around to having a little wiggle or thought to move out of the way. A slightly cruel start from a developer that definitely knew better? Perhaps. But it’s also a cheeky statement of intent, leaving you in no doubt Super Star Soldier expects – and requires – nothing less than your full concentration from the instant you gain control of your ship to the closing staff roll.

Like all the very best old-style shmups Super Star Soldier starts off amongst the stars, goes vaguely Xevious-y for a few stages in the middle, and then heads back into orbit for the grand finale. This visual feast is an impressive sight even decades later, with each stage somehow packing a selection of unique enemies and environmental details (I’m especially fond of the fourth stage’s solar eclipse, shown in the screenshots on this page) into a mere 512KB of data, but what makes it truly spectacular are all the one-off segments tying these graphical flourishes into the gameplay; the times you have to dodge fiery arcs of debris-spewing lava as you zoom over a planet’s surface, weave through chunks of space-ice while shooting at beautiful dragon-like beings snaking across the screen, or take on a horde of abandoned and only semi-functional robots in a desert. It’s bloody hard to make stages feel distinct from one another in a genre that uses a fixed width auto-scrolling backdrop, but Super Star Soldier honestly manages to keep things fresh and interesting even for those with little love for bullet patterns and high scores.

This level of care and expertise carries straight through to the boss encounters too, each one looking and fighting very differently from the last (and best demonstrated in the traditional boss rush segment towards the end). The first mid-boss is a large rotating ring capable of firing at you from all angles with no way to escape or any safe zone to hide in, and then at the end of the stage you find yourself fighting a giant mass of metal and firepower trying its best to hem you in with two giant lasers, which then follows up its little “trap” by firing diagonally ricocheting shots and a straight-ahead attack down this “tunnel” it’s forced you into. The game always dares you to put yourself in danger and attack anything from a LASER SCORPION to a SPACE OCTOPUS-ish thing head-on, each one-on-one clash a genuine thrill and a real joy to play. Plenty of other shumps save that sort of intense action for later levels, but Super Star Soldier seems to say that if it’s only got eight stages to share every idea it has with you, then it may as well get to the most spectacular and challenging parts as quickly as possible. 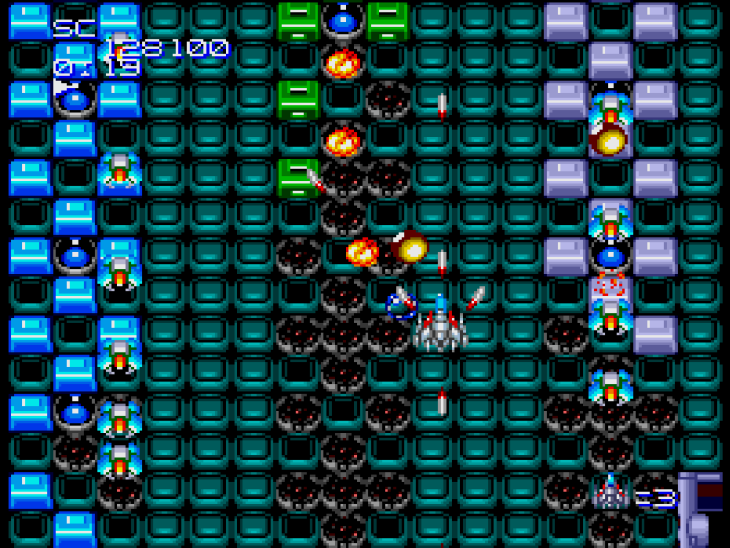 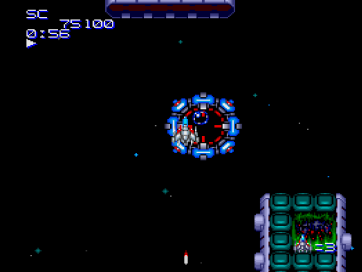 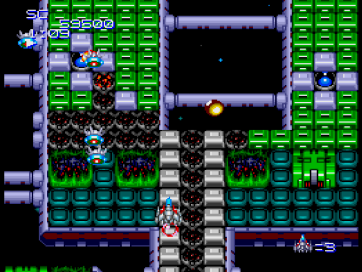 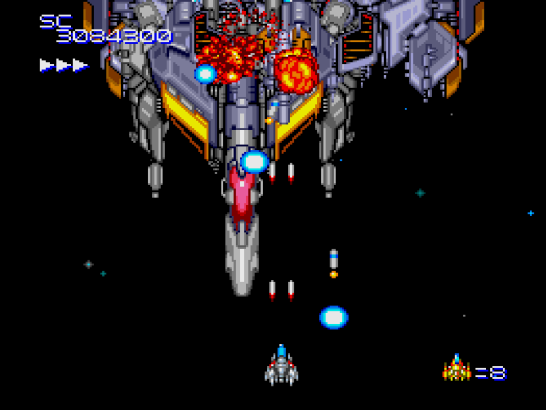 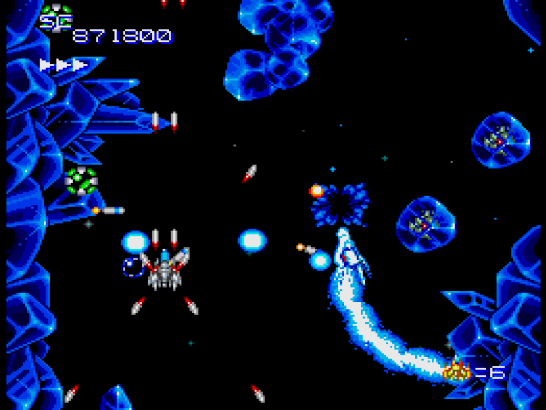 As great as all that is it’s the bonus Caravan mode I keep coming back to. For anyone who needs a quick refresher: “Caravan” was Hudson’s annual Japanese score attack championship (not to be confused with Naxat’s short run of similarly named Summer Carnival games: Recca, Alzadick, and Nexzr Special), with each year having a different official “Caravan soft”. Super Star Soldier was 1990’s, preceded by Gunhed and succeeded by Final Soldier. The competitions may be long gone (and I wouldn’t have won them anyway) but the modes that remain are still a heck of a lot of fun even today, each one offering short sharp bursts of supreme score-focussed shmupping on special points-laden stages designed specifically for this purpose. And if scoring’s not your thing (whether competitively or just for fun)? There’s still a relaxing sort of pleasure to be found in unleashing everything you’ve got on a steady stream of destructible tiles. And if scoring is your thing? Super Star Soldier has some very special, almost puzzle-like, little secret tricks up its sleeve you can trigger to boost your score (my personal favourite is the tiny enemy “ring” that gives a huge points bonus for daring to blow it up from the inside). To keep things fair and straightforward only one type of power up is present in Caravan mode – the red spread shot one – allowing the stage designer to place every last enemy with a purpose and precision not found even in the excellent main game, while also ensuring you’re always equipped with the right tool for the job. The two and five minute variations of this mode are both short enough to be treated as nothing more than a quick casual blast but also crafted so beautifully that with practise and skill it’s possible to double (or more) your final score on a good run – and if you don’t then it’s short enough to make it so easy to have just one more one more go… until you’ve somehow spent most of the day utterly consumed by what is technically just a few minutes of gameplay.

Super Star Soldier’s multitude of joys are immediate and obvious, with extended play only revealing more treasures hidden under the surface. It’s apparent simplicity – shooting in space is as old as the genre itself – reeks of confidence, a game that knows it’s already more than good enough exactly as it is.

[Ko-fi supporters read this a week ago! Why not join them – you get everything early and help me out too!]