You spend most of your time in the first two Sakura Wars games interacting with the adventure side of things: graphic window at the top, dialogue box at the bottom, and… that’s about all there is to the layout, really. The adventure – the story – that takes place on these deceptively simple screens is the heart of the series, the one thing it absolutely cannot do without. In the first two games you experience it all through the eyes of Ichiro Ogami, a Japanese Navy Ensign freshly assigned to the Grand Imperial Theatre and one of few men with the spiritual strength to operate a “koubu” – the most common name used for the group’s steam-powered mech-like demon bashing suits.

So what do you actually do in these adventures? How do they play out? 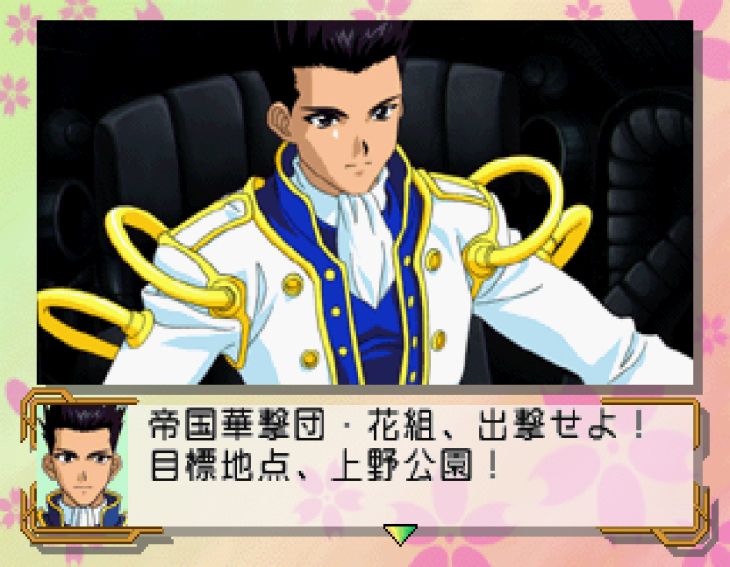 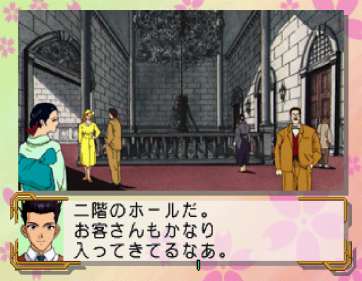 The structure of both games is highly regimented, the two of them setting you on a linear path through a specific set of chapters, each one further broken down – as detailed by the manuals – into a set flow of Adventure>Save>Adventure>Save>Battle>Boss>Epilogue>”Next time on Sakura Wars” capturing the spirit of an episodic TV show. When used within a game this simple structure helps to correct many of the pacing problems longer story-heavy games tend to face, as each chapter has to set up and then deal with a specific event or incident – someone joining or rejoining the group, putting on a stage show, enjoying the new year celebrations, or the theatre being overrun by armed military defectors trying to stage a coup and take over Japan (that last one’s as much of a shock to the cast as it is to you) – and whatever’s happened it has to be wrapped up by the chapter’s end. As with any good story there’s an overarching plot with its own twists and turns linking all of this together and subsequent chapters will build upon seemingly minor plot threads or reference previous events (Sakura Wars 2 also expects players to have at least a working knowledge of the previous game – not an unreasonable request considering the original’s runaway success), but there is almost always One Big Thing going on, and that One Big Thing will be introduced, explode in everyone’s faces, involve a fight, and then finally be sorted all in the space of a single chapter.

This usually begins with a few mandatory event scenes to set up the latest plot, with Ogami then given some free time to explore the theatre on his own using either a point and click interface (Saturn, Dreamcast, PC) or by directly walking an adorable tiny version of the Flower Division’s leader around the theatre (PlayStation 2). In the first game you’re usually given somewhere you need to be and going there instead of having a wander will more than likely immediately trigger the next major scene. However from Sakura Wars 2 onwards (as well as in the PlayStation 2 remake of the first game) you’re instead put on a sort of timer, Ogami being told for example “Go to the manager’s office at 10am“, with every optional event he triggers between now and then – even visiting an empty room – moving the clock on by precisely five minutes (this includes attempting to trigger the main event early, which usually results in “Come back later, I’m busy!” or similar). It’s free time to get to know the cast, to politely knock on bedroom doors and try to smooth over earlier upsets, to stand out on the terrace at night with someone and admire the view, to sit and eat with a friend, to find Iris’ precious lost teddy bear Jean-Paul so she can sleep soundly at night, to try and spend a little more time than you’ve officially been given with someone you like.

Many of the conversations you have during this time and elsewhere throughout the series utilise Sakura Wars’ unique “LIPS” – Live Interactive Picture System – dialogue prompt boxes, standard adventure game responses given a creative real-time twist that amongst many other things emphasise that the person standing before you is “really” there and awaiting a response right now, that the dire situation at hand can’t wait for you to scoot off to a FAQ.

Thanks to a combination of the above it’s literally impossible to see and do everything you want to (never mind everything everything) in a single playthrough of any Sakura Wars title – in fact it’s impossible to see and do everything even if you go to the trouble artificially playing through the game six (or eight, if playing Sakura Wars 2) times so you can focus exclusively on each member of the Flower Division in turn. There is simply too much to do and too many events that force you to choose between one of several options – even key events. This isn’t Baldur’s Gate style depth (and such an approach wouldn’t work here anyway) but every choice you are given – to wander over to the stage rather than the library, to buy a bromide at the theatre shop or not, to give a serious or goofy response to a question – is a genuine choice that will be acknowledged and responded to. And this means every time is your time with the Flower Division, which makes the games feel alive and organic, and also helps to preserve the illusion of the cast being characters rather than quickly exhausted response-o-bots. 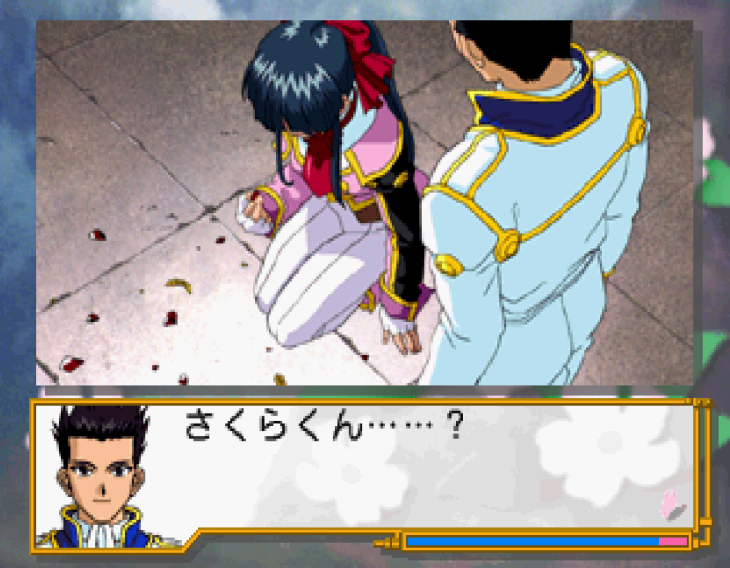 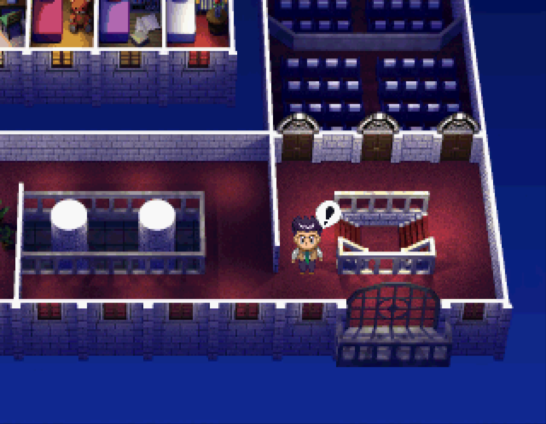 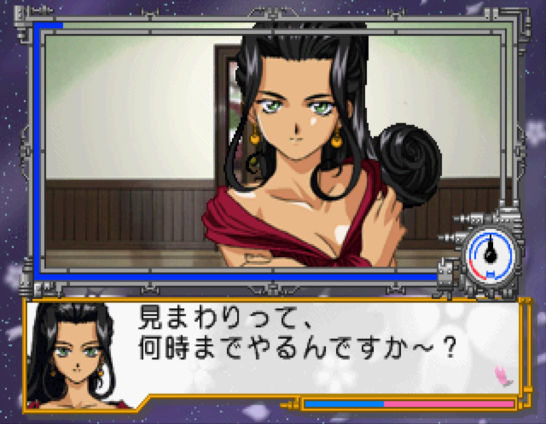 There is of course no point in having such a strong structure if you’re not going to break your own rules every now and again and neither mainline Sakura Wars title has issue with a chapter being markedly longer or shorter than the usual, or temporarily abandoning something is “should” have or including something it never has before if the experience would benefit from it. The first game features a spooky mansion for Ogami, Kanna, and Sumire to explore at length via your trusty cursor, the second has an entire chapter where just for once you done fight anyone, and both of them are happy to throw you into a series of all-or-nothing battles towards their respective climaxes rather than follow their own established tempo. There are even minigames to break up the mood (if you can find them at the right time), anything from hanafuda matches to helping Iris rush between busy stalls, as shown below.

Of course it’s all well and good to look at the technical side of things, but no matter how well considered they may be it’s the writing that really makes a story worthwhile. Yet there’s no escaping the fact these are games about one colour coded team and their marketable gadgets in a world where the power of friendship is something real. You’ve definitely seen something like this before.

Or at least you think you have. Sakura Wars puts just as much energy into subverting all the usual tropes as it does celebrating them and it all starts with Ogami, who eagerly and very seriously accepts the job as the Flower Division’s captain only to apparently find due to a combination of the group’s secretive nature and a pun involving the word “Teikokukagekidan“, which depending on how you write it can mean either “Imperial Assault Group” or “Imperial Opera Group” – leaves him not finding his feet in a glorious career move but performing menial tasks for a bunch of civilians. It’s an affront to him, to the navy, and as nice as this young women are they’re obviously not capable of protecting anyone – one of them’s a little French girl, for goodness’ sake! It’s an unusual start for a series that includes the lyrics to its own theme song in the manual, one that goes beyond the usual comedic “fish out of water” or “useless new guy” angles and instead makes it perfectly that he and you are not a singular hero who all will flock to but one part of a functional team – you’re here to help, not have your ego caressed by a troupe of blooming maidens. 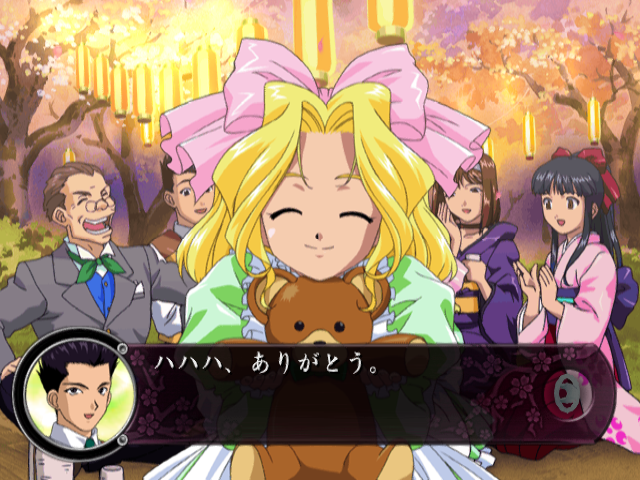 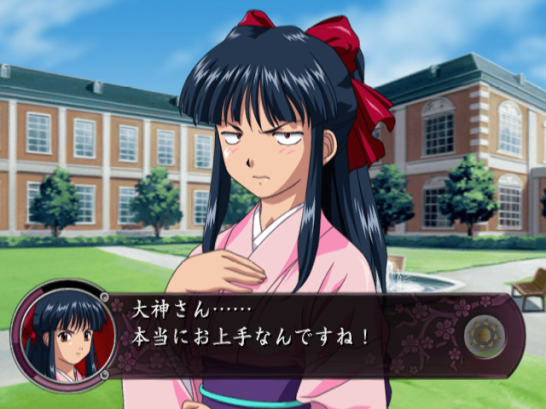 In fact the cast not being there purely for Ogami’s benefit is a core part of the series’ success. Everyone in the Flower Division exist as characters with their own dreams and interests outside of your personal desires, and it’s this “whole” approach to them that allows them to not only survive but thrive across multiple forms of media that don’t require your input or for their fearless leader to be present and emotionally available; something that both main games as well as the stories found in fan disc and elsewhere reinforce over and over again. And in turn this frees you up to play the part of Ogami, leader of the Flower Division, not Mr. Nothing counts if I don’t “win” a girl, your interactions with them not revolving around constantly pleasing everyone or clinging to them like a lovesick puppy.

So it’s all love and rainbows, right? Oh heck no. While both games comfortably remain within the bounds of the CERO 12 rating their later releases were given enemies will still talk about drowning the Flower Division in a sea of blood, Iris will break your heart as wonders about where heaven really is as the group flies high in the sky on their way to Sakura Wars 2’s climax, and when Aoi Satan is revived and then swiftly killed off the second game takes the time to not only show the Demon Lord’s blade piercing his torso but also his blood splattering in an arc across the cobbles once it’s been withdrawn. While friendship and teamwork may win the day neither story is afraid to present your game-long conflicts as anything other than dangerous work, and it’s this darkness that gives the light the contrast it needs to truly shine. The cast smile and laugh and sing in spite of the horrors they’ve faced, not because they know no better.

The Sequel To Success

Dating Games… Without The Dating?!

[I know I say this a lot but now more than ever this is true: This Sakura Wars Corner would not exist in any shape or form without the support I receive from the kind people who have donated/subscribed to my Ko-fi. Thank you everyone!]