I know I’ve definitely played Konami’s groundbreaking dating sim Tokimeki Memorial before, although that happened so long ago I honestly can’t tell you which version of the game that involved other than that it was definitely on a disc (I went through the Saturn port this time around). I can’t recall the details but I think it’s safe to say I didn’t understand what it was trying to do or really enjoy anything about it for all sorts of reasons. Since then I’ve had two more goes at Tokimeki’ing, both successful in different ways, even if neither of those personal wins were the sort the games – or I – were expecting. It’s safe to say a trip back to Kirameki High School has been long overdue now that I’m a little wiser, a lot older, and I’ve got a fresh attitude in tow: This is my time to shine. I’m going to dare to assume people will want to talk to me if I call them up, participate in every activity I come across, play the kind of character I want to be rather than fruitlessly chase after all-round perfection (which is itself the natural result of the game’s incredible melding of stats and story: Trying to be the best at everything is – and should be – an arduous and stressful task for both you and your schoolboy avatar), and embrace the inescapable TokiMemo-ness of it all with enthusiasm. Every birthday will be celebrated with a relevant gift for the girl in question, every date with everyone who asks agreed to. 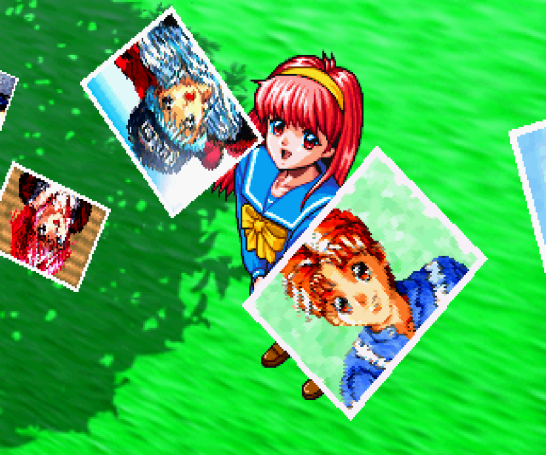 How well did this can-do “whatever happens, happens” approach work? Very well. In fact it worked so well I received multiple boxes of chocolate on every Valentine’s Day, I actually got a little worried towards the end that several other girls might try to outdo the chosen subject of my affections (Yuina Himoo, the blue-haired science nerd), and on more than one occasion Shiori Fujisaki, AKA: The Last Boss of Dating Sims, asked me out on a date. I was so shocked by how pleasant and stress-free the whole experience was I honestly wondered if I’d unwittingly done something to break the game. I hadn’t of course – all I’d done was take the game at face value, enjoying and engaging with what it was actually offering instead of crushing its breezy innocence under the weight of the emotional baggage I had previously brought to the table or treating the expected multi-girl dating aspect with unfounded suspicion due to the wider gaming industry’s famously backwards way of incorporating females into games, especially in romantic scenarios. In this context – a trip to the zoo being a trip to the zoo, a day out shopping nothing more than a day out shopping whether you end up looking at dresses or electronic components – choosing to do those things with more than one girl (more than four, five, or six girls too) isn’t leading anyone on, it’s just a nice time with someone you know. Isn’t that what normal, healthy, school aged friendships should be? Wasn’t two people being able to have fun – and only fun – together in a game where romance and forever-love is the ultimate goal something I praised when I felt amazed and relieved by its presence in Tokimeki Memorial 4?

It was, so finally realising – like a clod who’s taken years to understand a game that can be completed in hours – the same positive and rounded approach to personal interaction has been present since the series’ 1994 PC Engine debut was a joy.

The cast themselves have an incredible amount of depth to them, always defined by various traits – the art lover, the over the top scientist, the sporty one – but never forced to endlessly perform to type. Every one of them is written as someone with clear hopes and interests beyond That One Thing they really like, as people who don’t exist purely for your benefit (romantic or otherwise). Someone can be an attractive fashionista and still be a little nervous at the thought of asking you out on a date, the cute girl might love spending time in the local arcade, a girl who voluntarily buries herself in schoolwork will genuinely enjoy a day out in the fresh air. Even Shiori isn’t as demanding – as a friend – as her fearsome reputation within dating sim circles would have anyone believe, leading to all sorts of unplanned moments where she’s openly supportive, shy, sets you up with a friend of hers, or sings with you in a karaoke booth.

That’s spectacular enough on its own but the real magic is that all of the above also applies to you, the player, as much as it does anyone else attending the school – you can be exactly what you want to be and not suffer for it. I didn’t have to be all books, all the time, to hold avid reader Mio’s favour, and the beautiful Mira was happy to spend time doing things other than going shopping and looking stylish. Obviously you need to build up and then maintain some core similarities with a girl if you hope to see them waiting for you under the school’s legendary tree on that fateful final day, but on the whole TokiMemo deems it more important for yourself and a date to be in sync with each other, both finding a movie equally so-so or both thrilled by the amusement park’s ghost house, than it does artificially carting them off to the same “best” location every time or pigeonholing yourself in one box for all three in-game years. 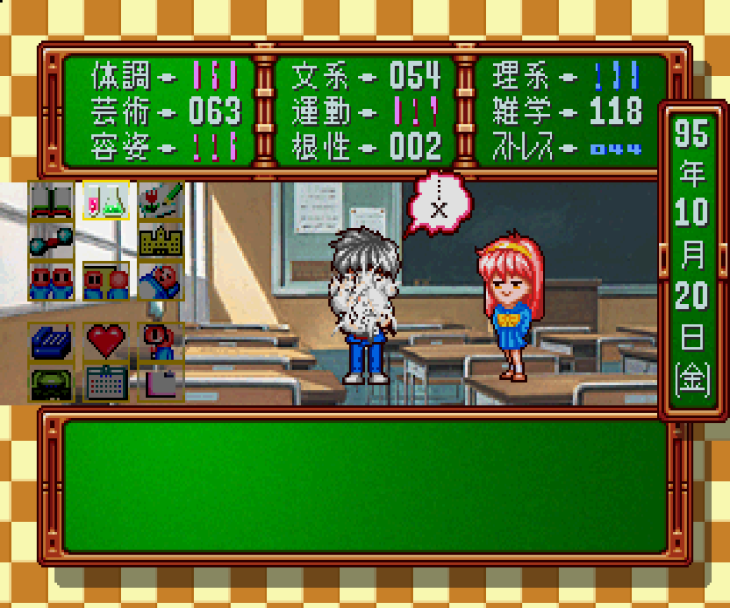 This flexibility helps to give you the space to not only pursue your own interests (which in my case involved lots of computer club and very little sport), to do things because you want to do them – and also to take good care of yourself too. If I needed to spend a week relaxing on my own because school is, well, school, or fancied repetitively combing my hair in a mirror or having science experiments blow up in my face then by and large I could, these choices not risky deviations away from the tireless pursuit of girls but positive, useful, ways to spend my time. Your classmates don’t fade from existence the moment you stop chasing after them, your time “away” still peppered with unexpected meetings in the school corridor, kind offers to walk home together whether you’re their most favourite person in the school or not, and happy pixel-art versions of them cheering you on as you practise whatever it is you’re trying to do. So relaxed and generous is TokiMemo that typical dating game rewards aren’t reserved solely for those who excel: One sports day’s three legged race began with a special scene accompanied by a unique piece of artwork and my inevitable abject failure at the event was noted as nothing more than coming last in the race, rather than seized upon by the game as the perfect time to have a friendship-destroying (and out of character, considering the girl involved) argument for drama’s sake.

And just in case you try to take it seriously anyway TokiMemo’s happy to put you in your place with a steady stream of RPG-like battles (complete with ridiculous “summons” if you do well enough), a playable Twinbee themed time attack mode and more, all of them a not-so-subtle reminder that what you’re doing is supposed to be fun. 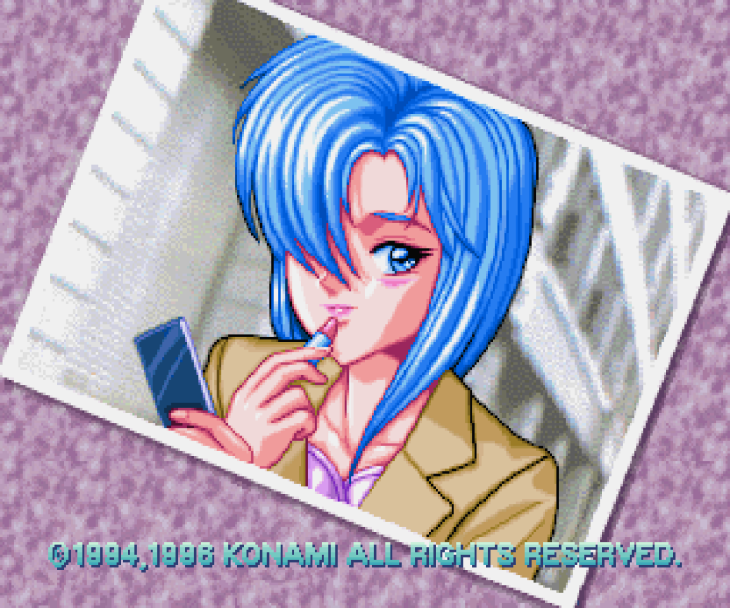 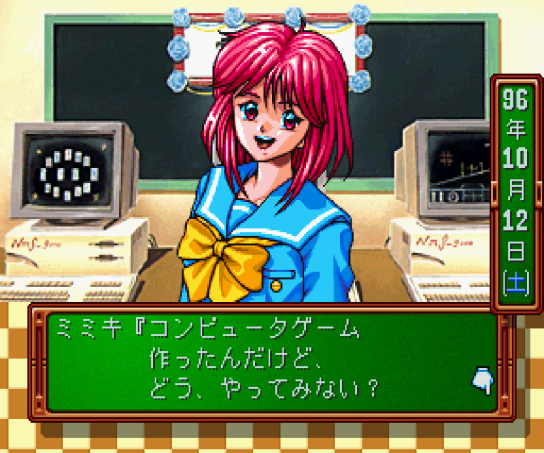 It’s easy to say that the game’s range of stats and simulation elements run underneath all of these scenes, but it’d be inaccurate to do so. In truth they’re as central to the TokiMemo experience as any character or important event; an abstracted record and reflection of your time spent mastering a skill, of how relaxing it is to chat with friends, of the natural rust that sets in when you haven’t practised something for a while (and then have to decide if you’re going to take it back up or spend your time elsewhere) – they’ve never been just numbers.

The simulation and time management aspects of TokiMemo are also a sneaky way of inviting you to trip yourself up too: Booking as many dates in advance over the phone sounds great but… what if someone surprises you with an offer to go bowling one day – do you really want to turn them down? What if you accidentally promise two dates on the same day? Or you carefully space them out and then… wait, was I supposed to go to the park today and the cinema next week, or was it the other way around? What about that girl you always meant to invite out somewhere but didn’t, and then tried to but she was busy on the day you suggested, and then forgot about, assuming you’d seen her more recently than you thought you had? She’s rightfully getting annoyed by your cold shoulder and she’s going to make sure everyone knows how badly she’s been treated, including any would-be girlfriends. Oh and don’t forget those school tests are coming up and you’re already worn out – you should really take a break… and somehow find the time to study too…

The game is right there, how you manage your statistics and how you choose to spend your deliberately limited time as much a part of the narrative as any day out or legendary tree.

Tokimeki Memorial’s just brilliant, and absolutely deserves its hallowed status as the dating sim. It’s brave: A romantic game where the ultimate reward is for a to girl admits she likes you? That’s really it? It’s surprising: A romantic game where the other characters might be too busy to spend time with you just because they have lives of their own? It’s clever: Just-so-happening to introduce new girls to upset your routine, girls with interests similar enough to a favourite’s they threaten to derail all your romantic planning so far yet can’t afford to ignore due to the game’s “bomb” system, their neglect eventually guaranteeing an avoidable falling out that will send shockwaves throughout your entire social circle. It’s full to bursting point with content: I “won” the girl I hoped to, spent loads of time with her, and still missed plenty of character specific events.

The passage of time as well as the game’s enduring popularity may have rendered TokiMemo familiar in an unremarkable way to many – it’s the Tetris of its genre, it’s just what dating sims are – but all it takes is a single run through to see just how forward-thinking and perfectly executed it was – and still is.

[Ko-fi supporters read this a whole week ago! Come on over!]