Pioneer’s 1995 “Active Real Time SRPG” Bounty Sword takes place in a world of steampunk-ish gritty fantasy, a place where the divide between the almighty power of forgotten ancient technology and true magic is barely the width of a fairy’s finger, where people from all walks of life take on whatever dangerous jobs turn up at the local drinking establishment in the hope of carving out a simple living for themselves as bounty hunters.

We experience this world through the eyes of a man named “Sword” (you can rename him if you wish), a man who at the advanced age of 31 is much older than the usual selection of teens often seen brandishing pointy weapons on the cover of games with a similar theme. He insists he’s a gruff “Whatever brings in the money” mercenary type, although his past as a noble paladin and the fearsome “Sword Master” is never quite as far behind him as he’d like. Barely a few hours in he discovers barely-teen Fyuris washed up on a beach, a pleasantly bolshy girl who’s actually a princess (real name Ophelia) and a key member of the organised resistance against her own father’s empire and… well, you can probably guess how much of the plot develops from there. 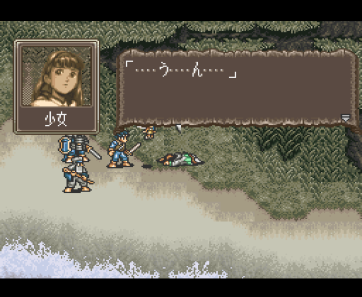 Bounty Sword’s a beautiful game, the willfully muted palette coating the land in a broad wash of industrial dilapidation and setting this world of swords and sorcery apart from the bright grassy plains of slimes the genre at times falls in to without thinking. As required of every SNES RPG the hardware’s unmistakable mastery (well, relatively speaking) of transparent colours has been used frequently and to great effect, everything from screen-filling spells to driving rain just that little bit more impressive than it had to be. The solid pixel art used for everything else is of equally high quality, every character from the world-changing to the generic displaying some charming animated flourishes when they celebrate a level up or pull back their bow, their designs always a little more unusual than knights and ninjas found elsewhere without being so strange they feel different for different’s sake. Detailed sepia portraits placed beside scroll-like dialogue boxes finish off the look, every new face worth lingering on even if only for a moment.

The story these gorgeous graphics are used to display is somewhat elastic, following one general thread but with some variation in how you get to wherever it is you need to go, what happens when you get there, and who’s with you once you arrive. The most straightforward example can be seen on the regional map: Generally you’ll have two or more areas flashing a lighter shade of beige, indicating important new places you need to visit. Which one you choose to investigate first is usually entirely up to you although there may be unexpected benefits to picking one over another (at its simplest this may involve recruiting a character who’s a perfect fit for the battle in the other, rather than fighting it out and recruiting the character afterwards), Bounty Sword always adjusting the episode numbers shown on the title cards to match the order you experienced these events, a visual acknowledgement of the impact your decisions have on the shape of the story. Unlike some of the more linear tactical RPGs available you’re not prevented from heading back to town to stock up on items and equipment unless the plot dictates otherwise, nor from heading back to cleared battlegrounds for a wander around in “Quest Mode” (read: traditional RPG walking and talking) – on some occasions this can even trigger new scenes. 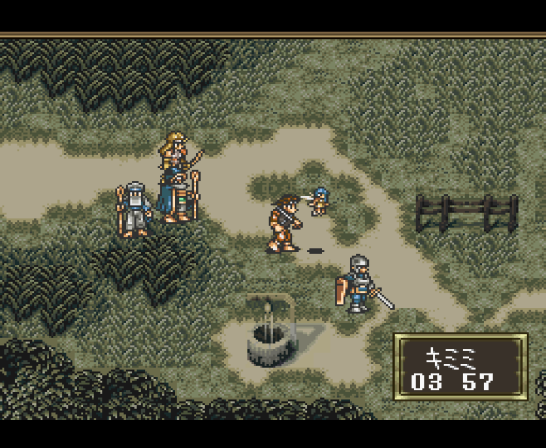 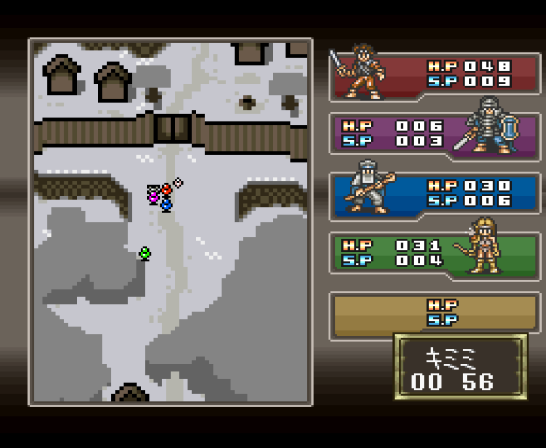 As lovely as all of that is there’s still one very important question we need to answer: “What the heck is an Active Real Time SRPG anyway?”

In some ways Bounty Sword’s as simple as it sounds – it’s an SRPG running in real-time – but the execution makes it feel more unique and exciting than the description. You and your enemies move around the map in real-time, clustering around the nearest opponent and trading blows as mages chant devastating spells or priests cast much-needed heals, with you dictating who goes where and when. Skirmishes are on the smaller side – more Shining Force than Langrisser – with a maximum of just five characters under your control at any time. Charmingly you issue orders using Sword’s loyal fairy companion, Tetis, rather than a cursor – herself as much of a character as anyone else – one of those little touches that don’t really matter but always raise a smile.

You wouldn’t think a system like this, one with lots of moving pieces engaged in nonstop life-or-death combat on potentially very different parts of the same map, would suit a console but in all honesty Bounty Sword’s about as smooth as you could ever hope a complex game relying on quick reactions carried out through a d-pad and a few buttons to be. A quick tap of L or R instantly snaps your cursor to the next party member and all orders can be given to individual units or the entire party with ease, the action helpfully pausing while you select your commands. Clicking on a piece of ground occupied by an enemy will bring up a prompt asking if you’d like your unit to move to that location or to target the enemy standing on it, and as telling someone to target an enemy is the same as telling them to attack once they’re in range nobody is ever left standing around inches away from an enemy’s nose doing nothing at all (not unless you order them to anyway – and you can if you’d like them to hold back and wait for the opposition to come to you). Don’t want anyone to use items without your say-so? There’s an option for that. Don’t want one specific character to use items without your say-so, or would you prefer it if they did but they saved those items for when they hit 50% or 30% of their total HP? There’s an option for that too – and the same goes for restorative magic as well. Your party will even update you on their current condition if they need to; letting you know if they’ve reached wherever you wanted them to go or asking if they should continue attacking when their health’s low (and they can’t restore it themselves) or if they should break off and defend.

There is however a huge problem with this Active Real Time SRPG system, and sadly it’s with the pathfinding logic. Your party’s self-determined routes to their target are often anything from questionable to outright broken even when there are no obvious barriers blocking their way. Luckily Bounty Sword’s general difficulty is on the easier side of things so you’re unlikely to lose a bout because of this nonsense, but it never stops being frustrating to find someone you ordered to attack an enemy a few feet to their left running off to the top-right corner of the map. Should this idiot wander into half a dozen ogres and die they’ll incur a post-fight treatment cost and have to sit the next battle out (unless they’re Sword – if he’s defeated you’re immediately sent back to the title screen), potentially leaving you your favourite team member short. It’s a well-balanced punishment, one that’s troublesome enough to make you want to protect your team as far as is reasonably possible without being such a huge headache any loss is virtually the same as a restart. To keep your numbers up and stop a map designed to be tricky for five becoming impossible for three you can usually recruit extra reserves at levels around your own from a nearby pub (they come pre-equipped with decent gear too), although the pool of available mercenaries is highly limited (maybe two) and pre-set, unlike Final Fantasy Tactics‘ revolving door of blank slates for hire. Bar rare exceptions everyone you meet is “stuck” in their predetermined class – a healer can’t be switched to or promoted to a knight – with only a few high-level exceptions off the default path appearing later on.

Bounty Sword’s real strength on the battlefield is the way it never forgets that these skirmishes are supposed to be exciting, and that’s why you’ll find archers and other sneakily enemies lying in wait under dense forest canopies, get ambushed by ninjas on a boat, discover ancient machinery, cut your way through a sudden zombie outbreak, and even play through flashback battles of “The Incident” that took place ten years ago (revealing that some of Sword’s current foes were once his friends) – you really do never know what’s coming next. Even relatively ordinary conflict is peppered with dialogue, enemy leaders keen on insulting you from the safety of the back half of the map when defeated they can be expected to react in some way, even if it’s only a case of “H-how could you possibly defeat me?!“. These small additions add some much-needed personality to a genre that can sometimes be a little too keen on pushing you from one fight to the next, even if the many of the lines (and the characters who speak them) aren’t especially memorable.

I hadn’t realised it but I’d developed a sort of weariness towards the SNES, a “I’ve played enough Nintendo-branded 16-bit RPGs to last me a lifetime already, let’s try something – anything – else” attitude: and Bounty Sword kicked me right out of it. RPGs, even ones found on arguably the RPG system, can still be surprising. Is this a perfect, unmissable, breathlessly inventive take on the genre? No, not really. But it was enough to make me realise the genre – and the hardware it so often came on back then – still has a heck of a lot to offer and I’m a fool for ever thinking otherwise.

[I was only able to write this because of the support I receive through Ko-fi! If you’ve enjoyed this or any other article here, please consider leaving a tip!]

3 thoughts on “Sword, swords, and strategy”