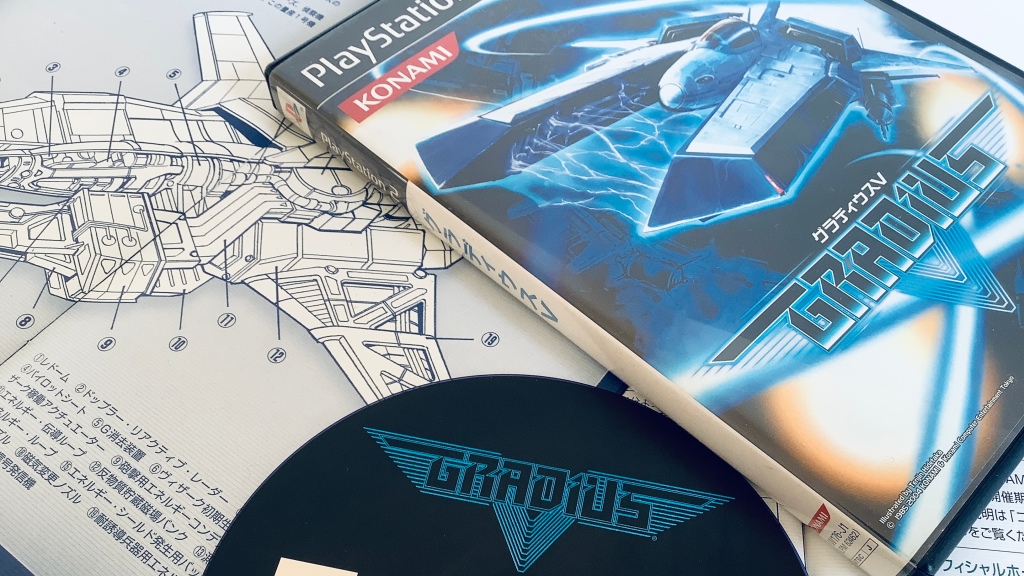 Gradius V‘s staff roll reads like a fan’s happy daydream, bringing Treasure, G.rev, and Konami (with none other than Hitoshi Sakimoto on soundtrack duties to boot) together to work on an all-new entry in the legendary shmup series. As far as the genre’s concerned this melting pot of talent is easily on a par with Sega’s sublime work on Nintendo’s F-Zero GX or Chrono Trigger‘s perfect mix of Square and Enix heavyweights, something instantly special simply for existing.

Unfortunately hiring the right people for the job is at best only half the battle, as these people then have to make the right game too. The right game for what was historically an arcade-first series inextricably intertwined with a genre that was inexorably sliding away into niche-dom; the right game for a modern market that couldn’t be relied on to know or care about Gradius’ fading importance. So, was this going to be a game designed for score-chasing experts, the sort of person who saw clearing a shmup without dying as the start of their time with the game? Was it going to be created for those who had increasingly vague yet always fond memories of a series they last played for more than five minutes almost two decades and several hardware generations ago? Or was it going to try and attract the millions of PlayStation 2 owners who had some spare money in their wallet and were looking for a new game – any new game – to buy?

Faced with a conflicting selection of equally valid potential audiences, the team decided to go with the one choice that was as theoretically sensible as it is usually impossible to pull off:

They made Gradius V a game for everyone. 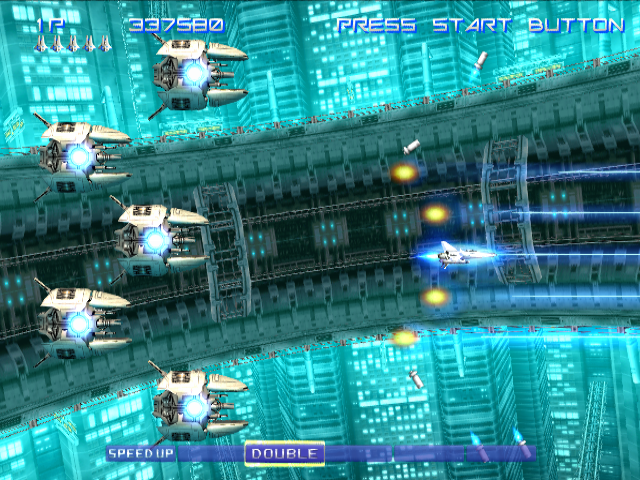 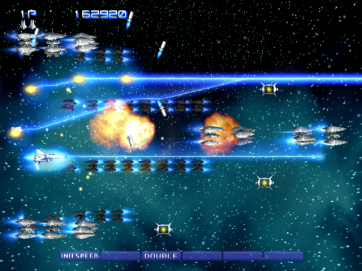 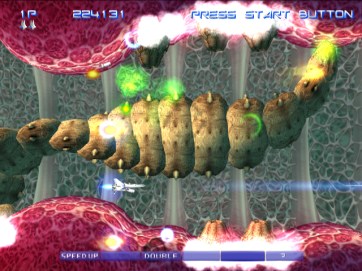 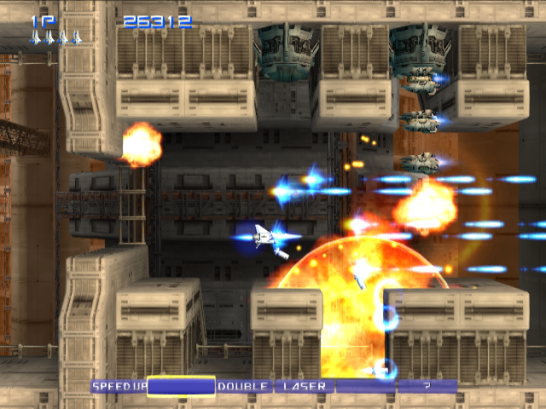 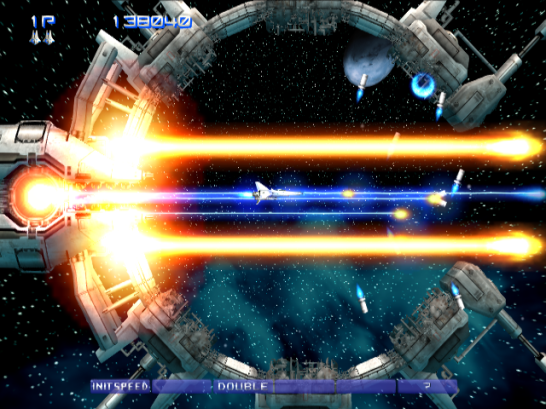 And so within moments of starting Gradius V – on any difficulty setting, and either on your own or with a friend – you’ll have shot your way out of your home base, dodged countless neon-blue lasers and been greeted by the beautiful sight of the planet Gradius surrounded by a sea of stars. This is a game keen on grabbing your attention at the earliest opportunity and then never letting go, your thrilling journey through time and space taking you from one extraordinary location to the next at breakneck speed. You’ll fly your way through the corridors of an enormous battleship to help out your future self (and later on play through that scene from your other point of view), experience quietly tense moments as you shoot your way through rapidly regenerating organic matter, and blast through waves of intimidating bosses, each one inventive and accomplished enough to make other shmups deeply envious of the casual destruction of foes they would have reserved for a stage’s climax.

What makes these scenes so magical is the way Gradius V weaves everything you can see and do into one remarkable whole, every awe-inspiring sight either a direct part of the action you’re playing through or the thrilling result of your own successes. Nothing feels quite as electrifying as the first time you position yourself just right so you can keep firing at the first stage’s final boss’ core as they hem you in with bright orange lasers, the entire battle a glorious example of good enemy design subtly guiding players to create an unforgettable moment all of their own. Later stages may scroll in unexpected ways or even twist around you: The translucent green goop found in just one section of the latter half of the game rapidly reimagined with creative abandon from one second to the next, the deadly substance spilling and deforming in a believable approximation of space physics as it’s compressed by moving barriers, tumbles over the edge of its containers, and pours at an alarming rate down the same tunnels you’re flying through. 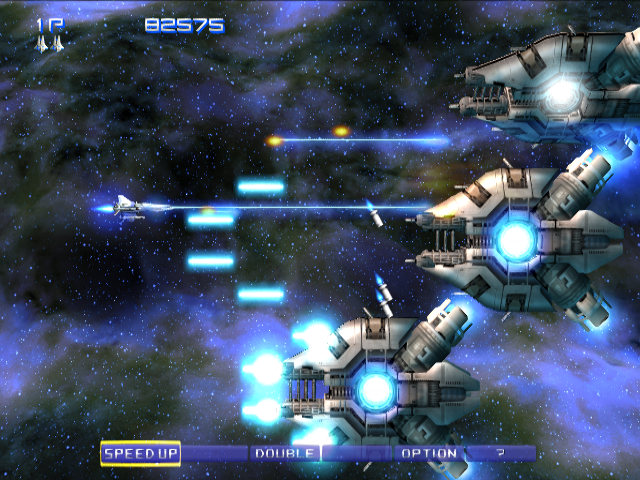 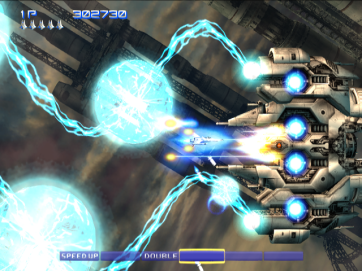 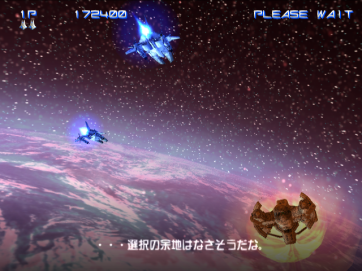 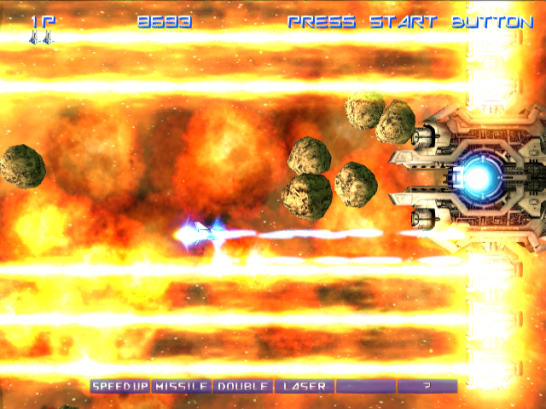 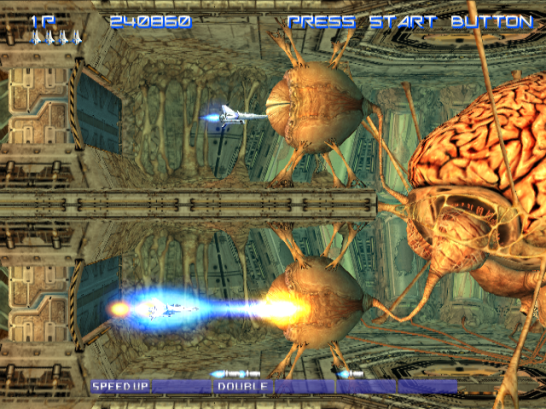 Gradius V holds on to its arcade roots by insisting on an inescapable level of challenge regardless of the difficulty; higher settings may increase the number of teeny-tiny grey bullets on the screen but everyone still has to learn how to handle hectic onslaughts of smaller enemies swarming the screen and flame-spewing outlets waiting on the walls. In spite of this deliberately unavoidable level of torment Gradius V still feels like a game made with a broad audience in mind, because it never forgets that flying between screen-length laser blasts to shoot at the tiniest opening in a boss’ defenses is more than hard; it’s an exciting event, and nobody wants to miss out on those. Gradius V argues that the enjoyable middle ground between between “easy” and “hard” is not a bland Goldilocks-like “just right”, the true middle ground is in giving these challenges a real reason to exist, giving them value and purpose beyond their ability to kill the player off – a narrative, if we dare say it – so everyone can understand that the game wouldn’t be less frustrating without them, it’d be less Gradius V.

To ensure fairness the visual information you receive on any difficulty level is always the same and it’s always everything you need to know, whether that’s the micro-story of tiny bipedal turrets slowly walking in to position from somewhere behind you before they stop, turn, and fire, or the way bosses display clear reactions to your own behaviour rather than blindly running from a script, perhaps only opening up to give your lasers access to their cores when you choose to put yourself in harm’s way. Every life-ending problem (and there are plenty of them) you face can be understood within seconds: You know should carefully pick your way through the dense asteroid field, you know getting caught behind a wall as the screen scrolls away is a terrible idea, you know you should aim for the one safe gap in a place where everything else is going to crush you. Every situation has been crafted as though it’s designed as a test of a particular shmupping skill, whether that’s something as straightforward as quickly harvesting neat lines of enemies for the power ups they drop before they fly away forever or handling enormous enemies that must be fought in a vertical environment with a ship designed exclusively for horizontal stages. Every hindrance you survive is a skill learned, a new string to your shmup bow – and a chance for Gradius V to throw something even more complex and dramatic your way later. 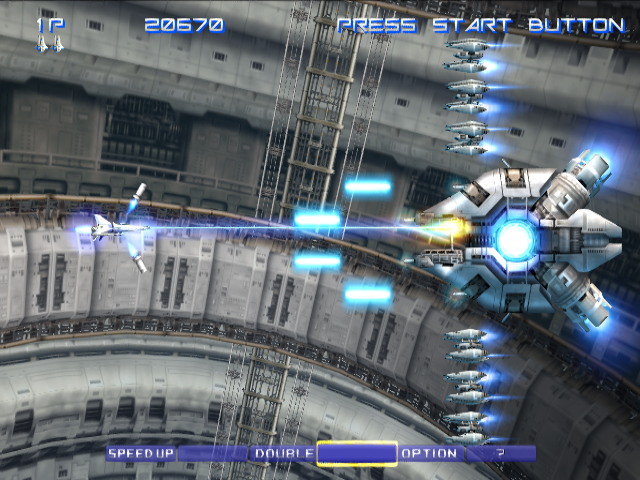 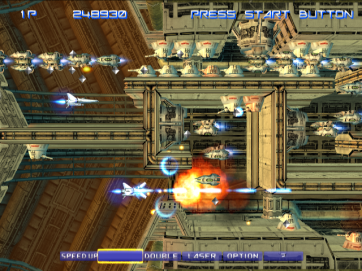 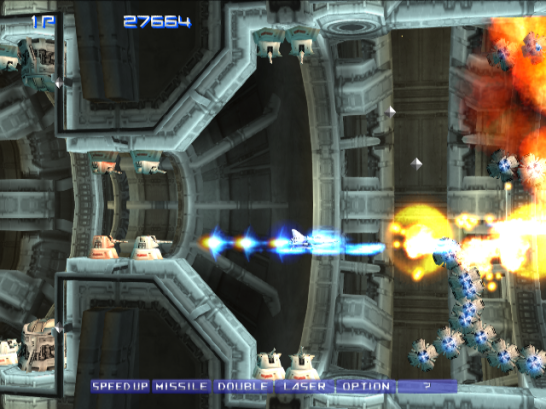 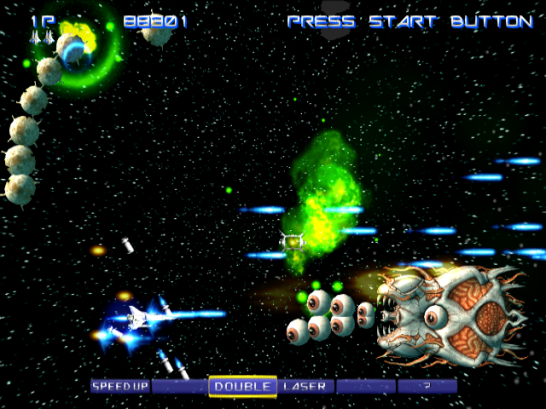 And all of this is the sort of spectacle you can enjoy even when the game’s repeatedly killing you off, the anguish of your constant deaths caused by everything from eyeball-spewing space monsters to simple walls softened by seamless restarts as well as the helpful ability to endlessly practise any section of any stage you’ve already reached straight from the main menu. Again Gradius V finds the balance between the need to offer an arcade classic’s level of adversity without pushing away those who simply wanted a fun shooty game to play at home through its limited but ever-expanding credit system. Everyone gets three continues to begin with, and more are unlocked over time at a rate that seems to equate to about one hour per credit – and that’s one hour playing, not idling on the title screen while you sleep so you can wake up to Free Play mode. This enforced engagement elevates everyone, seeing players go from being someone who couldn’t even see how to survive a particularly tough segment to someone who passes it with ease. Gradius V gives you the chance to surprise yourself, demonstrating skills you didn’t know you had, skills that wouldn’t have blossomed so quickly if the game hadn’t said “No, we know you can do this if you keep at it“.

And when you can do it all? Those seeking tougher challenges can spend their time mastering Score Attack mode (complete with defunct internet ranking) or honing their skills until they can survive every last one of Gradius V’s 256 loops filled with all the pixel-perfect dodges and explosive plumes of enemy fire anyone could ever hope for, the very highest levels spraying bullets everywhere in a manner that makes even the brief lulls looks like your favourite Cave game at its busiest moments. Gradius V is an impossible game, one that sees being all things to all people as a precious chance to be entertaining for many rather than a market-led descent into safe middle-of-the-road mush. It’s an incredible shmup whether your love for the genre wells up from the very bottom of your heart or you just happen to like to space-y ones with aliens in them, and a beautiful reminder that a game doesn’t have to let go of its past to find a place for its authentic self in the future.

[Ko-fi supporters read this a week ago! If you’d like to join them you’ll need to click this way!]

4 thoughts on “Shoot the core!”