Berwick Saga, Tear Ring Saga‘s 2005 PlayStation 2 follow-up, managed to annoy me before I’d even opened the box. The reason is down to the subtitle, “Lazberia Chronicle Chapter 174“, a rather grandiose label that at first blush appears to imply Shouzou Kaga, the game’s creative lead and strategy-loving force behind Nintendo’s Fire Emblem series, had 173 further “chapters” written up in a notebook somewhere – the unmistakeable sign of a visionary artiste who had finally disappeared up their own turn-based battle system.

Diving in – a little reluctantly under the circumstances – soon revealed the real reason for the overenthusiastic gap between Berwick Saga and everything that had gone before: It wasn’t a troubling indicator of a game moments away from drowning under the weight of its own imaginary timeline but in fact a (crude) attempt to establish how much has changed, how little connects this game to the past. There are no “Hey look that person’s just like…” spot-the-lawsuit-dodging-design games going on here, no lingering feeling you know how this all works before the first battle’s begun. Which doesn’t mean everything’s been changed for change’s sake either – characters still drop dead forever the instant their health reaches zero and weapons shatter into unusable pieces at the worst possible opportunity – but Berwick Saga feels like a game that feels comfortable with being itself, even when that means stepping into uncharted territory, one hex at a time. 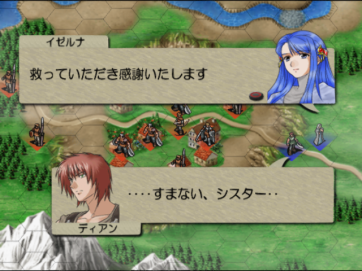 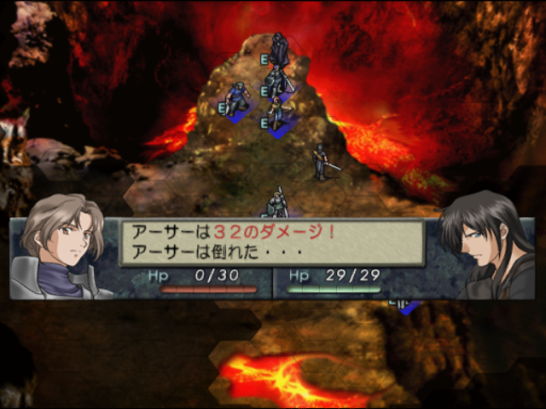 The decision to use six-sided shapes over the usual square grid is one of those deceptively small alterations to the standard formula that affects absolutely everything. It changes how battlefields are built and the way you move over them. You have to approach enemies differently, ever aware of how much more difficult it is to properly hem in a powerful foe when they have two additional avenues of escape. Even something as ordinary as defending a castle requires a new way of thinking, as positioning one person directly in front of the gate still leaves it completely exposed to attack from two other angles.

Another tactically fascinating shift is found in the mixed turn rule. Allied and enemy sides are no longer neatly split into distinct phases but instead mingle together in an uneven pattern, working through everyone alive on the battlefield until they’ve all had a go – with the larger force getting more turns more often. As lopsided as that sounds it’s a thrilling idea that opens up all sorts of possibilities, such as allowing you to (temporarily) safely place a weaker unit right next to enemies that have already moved or focus on wiping out units that are yet to take their go before they attack vulnerable party members/NPCs/escape. There’s a phenomenal amount of flexibility (and danger) in this system, as any unit who hasn’t moved can be activated when their side gets a turn, potentially resulting a directed assault against a hardy tank or enabling a sneaky thief to escape out of reach before the troops around them can do anything about it.

Berwick Saga’s just stuffed full of neat ideas, all of them adding a wonderful amount of depth and texture to its numerous conflicts. Enemies and allies can be injured and disarmed (this is all independent of the condition of their health bar), and when they’re in this dire state they’ll have to hobble away from the front lines defenceless to save them from getting captured alive by the opposing side – and if they are captured they can be released later in exchange for cold hard currency. Horses are now virtually units in their own right, each and every one bestowed with unique attributes as well as the ability to keel over in the middle of battle if they take too much damage, leaving their rider to fight the remainder of the skirmish (and every battle after, if you can’t afford a replacement) on foot.

Under these new and ever-changing circumstances Berwick Saga’s map design truly sings. Each fresh conflict is enhanced by a delicious amount of detail (every terrain tile takes ten different class types into account, to give just one example) and has been crafted with exciting strategic opportunities in mind, every new battlefield treated as a chance to surprise and delight. This is why a mere three fights in you’ll find your party crossing swords with an enemy leader capable of magically turning your own troops against their allies, and later on encounter enemies hiding in thick forest tiles, interrupting your unit with a surprise attack the instant they draw near. You’ll come across strong foes that you know you should leave well alone… and you’ll try to take them on anyway, thinking of the bounty you saw on their wanted poster back in the mercenary’s guild. There are battles where you must protect injured soldiers slowly escaping to safety or defend a castle against overwhelming forces, all of these desperate situations – situations you get to experience first hand – made in part to remind you that this is not a glorious war where you righteously sweep away a nigh-mythical darkness but a fight between kingdoms built with swords and stone, each with as much blood on their hands as the other. 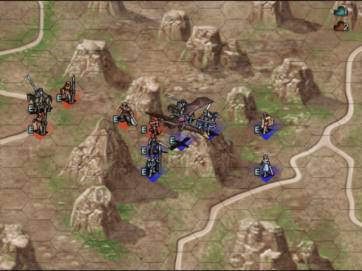 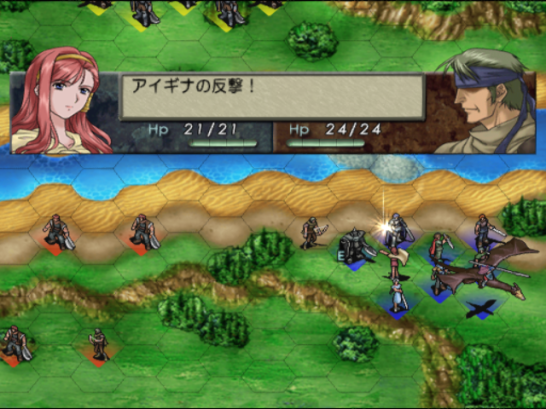 Other changes are more subtle. The big one for me is that this time around the RNG – the peskily opaque system that decides whether the attacker’s opponent is obliterated in a flurry of critical hits or left standing with a good chunk of their health remaining – just feels right. Not “mathematically accurate” or even “fair”, but “right“. Your mage, as physically weak as blossom in a thunderstorm, has a realistic chance of dodging every heavy swing that comes their way and even surviving the one unlucky hit that gets through too (just the one, mind you). Counters and counter counters have a reliable unpredictability about them, thrilling duels where you can reasonably hope to come out on top but are never sure enough of victory to relax nor automatically resigned to reloading an earlier save the instant the enemy manages to land a single retaliatory blow. Stat gains on level up are almost comically low (like, “one single stat gains one point” low), but on the other hand everyone always gains something – an instant and obvious improvement over Berwick Saga’s predecessor which would frequently level up allies in name only, the character gaining literally nothing from the process.

These understated shifts in behaviour come together to create a game that always punishes mistakes, but always makes you believe you can strategise the way you want to, without having to obsessively protect fragile units or requiring prophetic knowledge of a mid-battle twist to succeed. You never know what’s going to happen, but you always know you have the tools to cope with whatever hand Berwick Saga deals you. 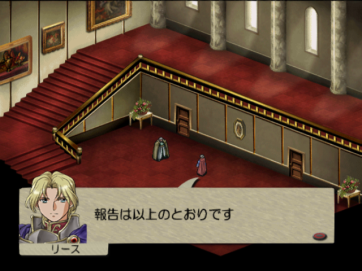 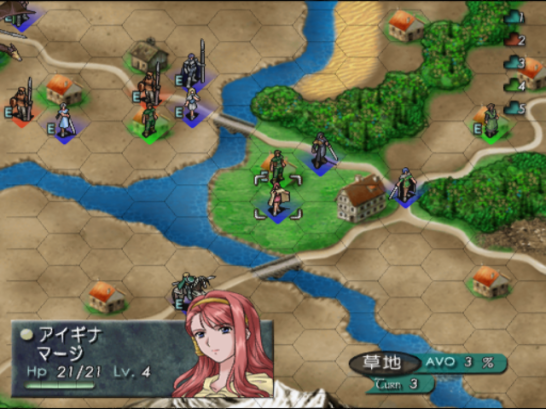 Outside of battle you’re given the run of Narvia, both the town and the castle. This is navigated by selecting the general location you want to visit from the list on the left of the map and then clicking on whatever hot spots or people are present in wherever it is you’ve chosen to go. By this point it will probably come as no surprise to learn that this area’s as meticulously detailed as everywhere else: You can rearrange the look and content of your private quarters, read long letters on your desk, check out the tavern, visit the library, and even stare mournfully the graves of your fallen allies, every examinable headstone bearing some words for the deceased. There are mercenaries waiting to be hired – some extraordinarily powerful, all useful – scattered all over the place, some preferring to stand in the guild while others spend their time in places better suited to their personalities (such as the healer in the monastery, for one).

This sprawling location does however present some significant irritations. Berwick Saga trips over its own intricacies by offering four major shops, one for swords and shields, one for spears and axes, another for bows and arrows (arrows in this game are a finite and separate resource), and one final one for spells and potions. To add insult to injury each one is staffed by two shopkeepers and each of which will only sell you one specific item type, doubling the amount of work you need to do just to ensure something as ordinary as your archer having a new crossbow and enough bolts to go with it. With how many troops you have at your disposal and how frequently their equipment needs replacing this setup only creates a lot of tedious back and forth that could have been avoided – or at least drastically reduced by having a single armourer.

A better idea is found in the limited availability of certain pieces of equipment. If you see a powerful weapon for sale it’s always a good idea to think very carefully about who you’re going to give it to (assuming they’re strong enough to equip it in the first place), because if it’s anything fancier than a basic longsword then it’s probably the only one in stock. This scarcity helps to prevent monied players – those who didn’t have to spend their cash hiring every mercenary they could find just to make it through the last chapter or who methodically set about capturing every high value target they ran in to – from accelerating away from Berwick Saga’s carefully planned difficulty curve, as the size of your glittering stockpile has little to do with how well you can equip your troops. 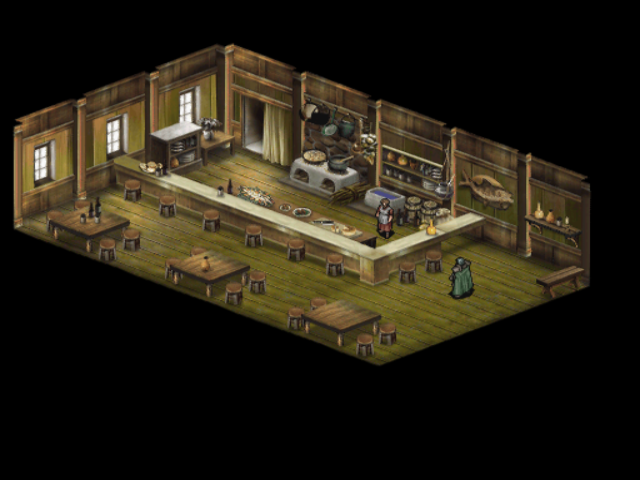 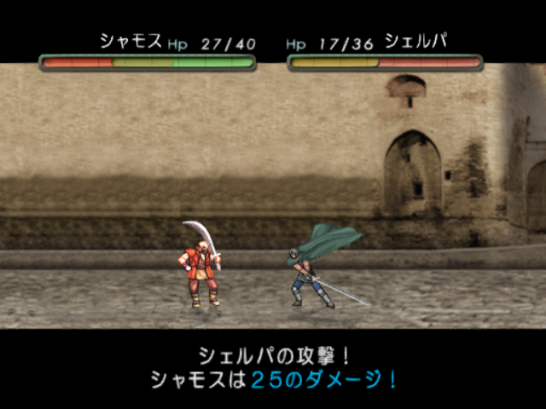 Regardless of the fanciness of your weaponry Berwick Saga’s a very difficult, but – and I’m as surprised I’m saying this as anyone – not a frustrating game. Reinforcements still appear at all those moments you really wish they wouldn’t but I never believed any stage was becoming flooded with enemy troops “just because”, especially as the new turn system makes it much easier to prioritise active targets and keep people safe. Even though I spent chapter after chapter with a scraped-together and sometimes under-filled team due to the early deaths of some useful characters it honestly always felt like I had a rounded, capable, party who stood a fair chance of succeeding. It wasn’t going to be pretty or easy to do so, but I never found myself in a position where with a little thought and a dash of luck I couldn’t clear the main mission objective and bring the vast majority of my units back home alive. Every new battlefield brought some intriguing new ideas to the table, and even when faced with stiff challenges, limited fields of vision, and a gaggle of easily killed villagers to shoo to safety it was my tactical thinking, my choices, that decided if were were going to emerge victorious or slink back with a few less team members to our name.

This might just be my new favourite Fire Embl- no, that’s not fair. Berwick Saga doesn’t stand in Fire Emblem’s – or by extension, Tear Ring Saga’s – shadow. This is an excellent and highly refined strategy game that is more than capable of succeeding entirely on its own merits and deserves to be thought of entirely as “Berwick Saga”, and nothing else. More strategy games should be like this, and more strategy game fans should play it.

One thought on “New tricks”