Eldorado Gate‘s second volume is so keen on getting started Bantross, our suspiciously inscrutable combination of host, party leader, and know-it-all rolled into one, can’t even make it through his introductory speech without getting interrupted; the game content to cut him short and throw a single line’s worth of description for each of the first disc’s three heroes our way before plunging straight into the fourth scenario.

Getting to this point after clearing the first volume couldn’t be simpler: Hitting “Continue” on the main menu with my previous save file present on the VMU was all it took to carry on like I’d never been away. The rest of the game is equally welcoming, using exactly the same layout and controls as before – even the magic stone combinations I’d created last time carried over without a hitch. The transition really is as seamless as it could possibly be, returning players made to feel like they’re settling in for the next chapter of a continuing story.

But what about those who picked up Volume 2 on a whim, had to delete their previous save data to make room for something else, or didn’t get around to this second installment as quickly as they wanted to? Players in any of those situations will find starting the game here just as painless. The manual takes the time to point out that although this may be a continuation of the first game these adventures can also be enjoyed as a series of short stories – and if you would like to know more the “Extra” option on the main menu grants immediate access to a thorough encyclopedia covering the story so far, with everything divided up nicely so you can either quickly refresh your memory on one particular person or go into as much detail as you wish. 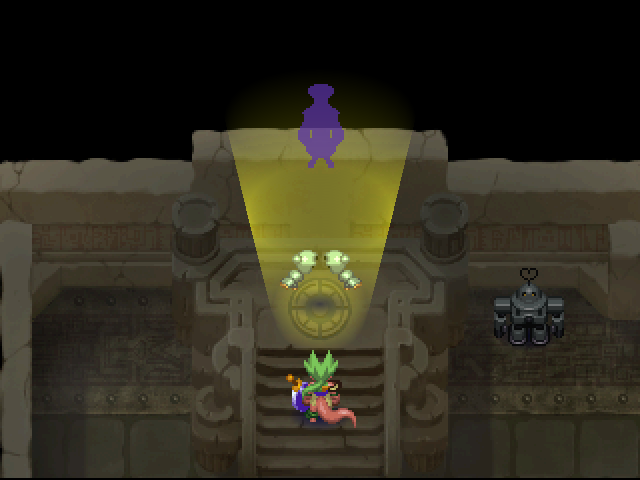 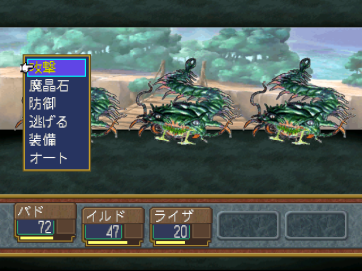 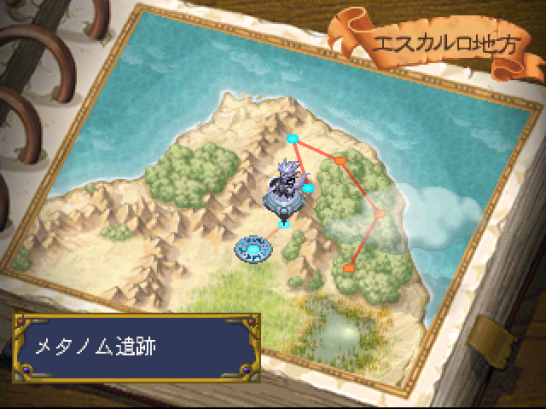 The second disc takes place in an entirely different continent from the first, filled with all the new people, places, and monsters you’d hope it would. Every last one of them’s as deliciously Amano as always, a riot of bold colours, charming brushwork, and dreamlike design. It’s all still clearly been made with a tight budget in mind (and as I said before that is exactly what you’d want to see in a bi-monthly RPG series) but even so everything still looks fresh and visually interesting, rather than constructed from a small and already familiar pool of preexisting parts. As we’re dealing with new characters walking around new places the enemies they encounter follow the same starter-to-slightly-tougher trajectory the random battles in the first volume did (Gomez retains whatever he was wearing from the previous game, and anything else you already had has been stored in the Land of Destiny’s warehouse), although I did notice enemies inflicting status effects more often this time around, including ones I didn’t see while playing through the first three scenarios. The good news is you can also make them suffer in the same way, as you too gain access to a range of stat-effecting magic stones that seem to stack where applicable and also – and this doesn’t happen half as often as it should in RPGs – work just as effectively on powerful bosses as they do random minions.

I’m happy to say those charming moments of traditional role playing that worked so well in the first volume are still present here: There’s one boss that can only be killed for good if they’re struck down with a silver knife, and during another event you learn the location of a particular town you need to travel to which causes its little marker to pop up on the overworld map… but it’s a long way away and you don’t actually know how to get there, so you have to head back into town and ask around for further information. It’s these mild inconveniences that help to make Eldorado Gate’s world feel rich and alive, the development team always finding new ways to play with their own game’s rules.

Scenario 4 stars Bud, a young beastman whose life quickly goes from bad to worse as his people are captured or killed by some wilfully ignorant beastpeople-hunting humans, he and his critically injured sister Liza forced to go on the run just to survive. As if things couldn’t get any desperate for the pair they eventually find themselves trapped between bloodthirsty humans and a large dragon – and it’s at this point the story switches back to Bantross and the first game’s heroes, who have been watching these tragic events (except Kanan for obvious reasons) unfold through the Land of Destiny’s magical viewer/transporter mirror. Gomez begs to be transported there to help, thrusting you unprepa-

Oh wait no, what actually happens is you gain full control of everybody’s favourite “Hit things with a hammer first, ask questions later” party member before he leaps into the fray, Eldorado Gate Volume 2 giving you unfettered access the Land of Destiny’s array of warehouses and shops so you can make sure he’s set for success (or at the very least, set up exactly the way you want him set up). But how will you know which elemental weapon and armour to pick? Easy. You’ve already seen what you’re up against: A giant green dragon with flowers, leaves, and grass growing out of its back – that’s not going to be a fire or ice based monster, is it? 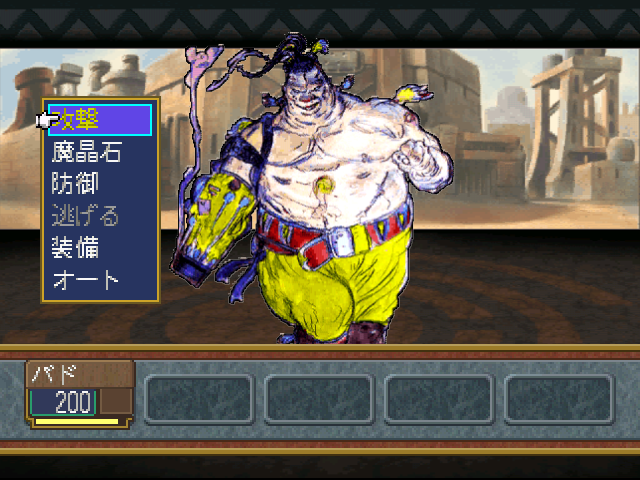 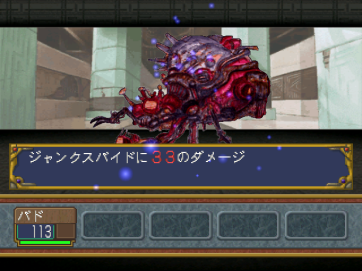 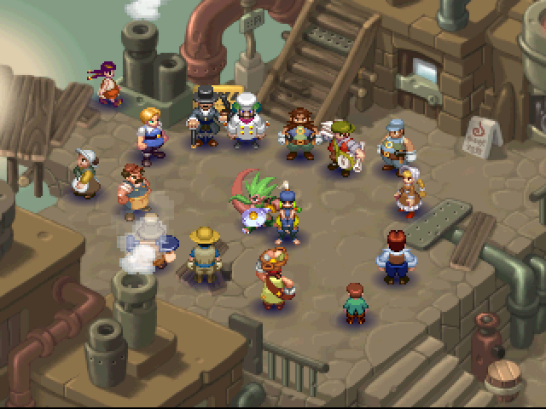 There is of course no happy ending to be had in a tale simply titled “Beastman Bud’s Grief“, and Liza predictably dies from her hunter-inflicted injuries. With little left to lose, Bud ventures into the Metanom ruins and collects three metal body parts waiting within, each one accompanied by an increasingly clear warning that their assembled power comes at the high cost of the wearer’s sense of self and their precious memories. Bud takes them anyway and goes on to easily kill every hunter that crosses his path in a blind rage – including the leader who organised the attack on his village – before crashing into a wall and releasing the few surviving beastpeople almost by accident.

And then he finally loses himself completely, in exactly the way he was warned about.

It’s an especially painful little scene, as this poor boy calls out confused in his newly robotic voice “wHO… i…? DOn’t uNDerSTan…” only to get whisked away by unknown forces before Bantross can swoop in and pick him up. Scenario 4 closes with Bantross calling out to Bud; the story’s conspicuously knowledgeable anchor unsure where he’s gone, the ex-beastman’s fate left for another disc. It’s a melancholy tale and it’s supposed to be, but Eldorado Gate’s brisk pace prevents it from descending into unpalatable self-pity. 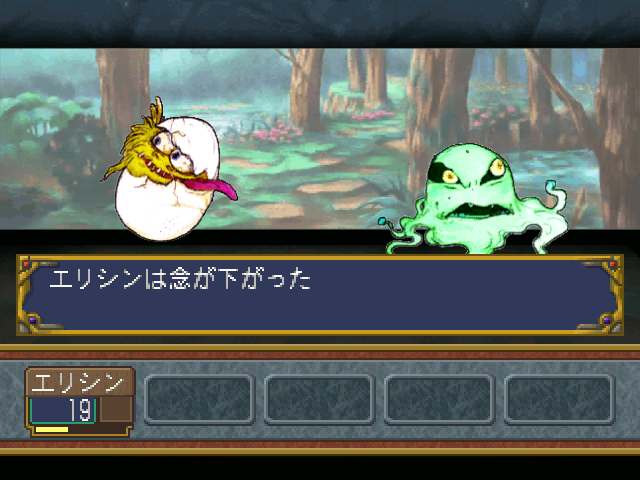 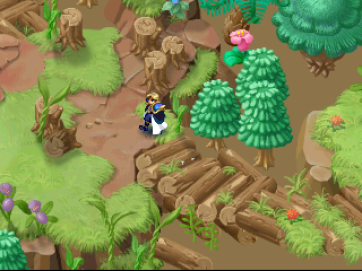 The fifth scenario introduces us to Elishin, arguably the first lead character in all of Eldorado Gate to tick all of the typical RPG hero boxes. He’s a beautiful swordsman whose long hair cascades down the back of his flowing cape, a man desired by everyone he meets – and he knows it too. In keeping with this more traditional angle his story is also more straightforward than the other leads revealed so far: A beautiful young woman is kidnapped by an amorous and well armed (literally – he’s got six of them) man and it’s Elishin’s job to rescue her, her father promising our hero her hand in marriage if he does. This all plays out largely as expected however an encounter with the previous scenario’s hunters proves to be his romantic undoing, as the girl’s father refuses to allow his daughter to marry someone who would defend those beastly “savages”.

Elishin’s tale may be a relatively ordinary one when compared to the others that have gone before him, but it’s been written with a clear purpose in mind. The lighter tone helps to maintain a sense of balance after the unrelenting tragedy of Bud’s scenario, and the relative simplicity of the plot allows us to concentrate on the quirkier battle mechanics introduced here – the knife-related trickery and the new magic types I mentioned earlier – without them being distracting.

Just as Eldorado Gate appears to have settled into a predictable RPG rut the disc’s final scenario shows up and upends everything we thought we knew as Bantross suddenly falls ill. This unexpected development leaves Gomez doing a lot of running around after the Gabri (Eldorado Gate’s colourful Moogle-esque creatures) in the hopes of making him better, eventually crossing paths with this scenario’s android protagonist, Ein.

Ein is the collective name given to a group of mass produced androids, and much of his scenario involves using a procession of identical units to save Gomez’ life as he makes his way through an ancient tower filled with deathtraps. This repetition, each Ein killed off in darkly comedic ways forcing Gomez to traipse back down to the entrance to get another (it’s worth mentioning that each floor – and there are only about five of them – takes seconds to walk through), is used to reinforce their replaceable nature: “Did your new friend just die a painful death? Best go grab another one then“. The absurdity of the situation is pushed to the point of generating real belly laughs – a later Ein warns a door might be a little dangerous, causing Gomez to turn away in shame and await the inevitable while you preemptively wince  after seeing previous Eins fried to a crisp and rolled out flat like an old Tom and Jerry sketch… only for the door to open just fine. This Ein even manages to successfully push back the giant laser beam in the next corridor – and then after a perfectly timed beat, spectacularly burst into flames before collapsing to the floor.

After becoming increasingly distraught at these impossible situations – Gomez really would have died if these Eins hadn’t stepped in to save him – our be-hammered hero finally snaps and refuses to let another Ein throw their life away just because it’s more convenient for someone else to view them as expendable machinery. But what does a saved, free, Ein unit without a “master”, one who could go anywhere at all they like, do? They help Gomez, that’s what they do. Eins are just that nice – and if Eldorado Gate’s quietly smart writing has anything to say about it, they probably have a little more learning to do in the future too. 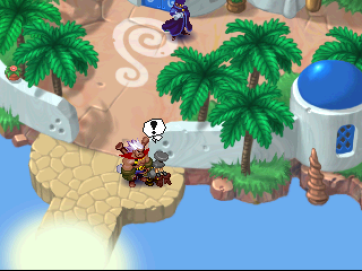 And Bantross? Oh he’s fine. Funny how he recovered the instant Gomez had helped the Gabri and met Ein, isn’t it (much to the frustration of a concerned Radia and Elishin)?

Eldorado Gate Volume 2’s an extraordinary game: It knows what it wants to do and just gets on with doing it. The lack of filler is almost scary; there’s no pause for breath, no sense anyone’s saying “Hey, we’ve got five more discs to go – maybe we should be careful in case we run out of content“, no rule or routine is so precious it’s considered untouchable. In fact Bantross is already teasing us with the promise of something slightly different next time, and I can’t wait to find out what that is.

[Ko-fi support made this article, every other Eldorado Gate article, and many others on this site a reality. Thank you to everyone who’s helped out!]