Most of your time with Capcom/Inti Creates DS game Kabu Trader Shun is spent in thrilling stock battles, using a cool head combined with gut instinct and a little luck to anticipate market fluctuations, buying and selling shares with perfect timing until you defeat your opponent in the merciless field of trader warfare.

Victory comes in many forms: Some traders want to see who can earn a set amount of money within a certain period of time first, others require the winner to have spent a specific quantity of cash and financially come out on top, and a few don’t care about the money won or lost at all, preferring to pile on the psychological pressure until their opponent has to bow out due to stress. A few even impose play restrictions, such as only allowing stocks to be sold first and then bought back afterward (short selling – the idea being you sell high and then buy back low), or forbidding you from buying and selling more than one company’s stock for the duration of the battle.

These intense one-on-one battles begin and end within the space of just a few minutes. To keep your best battle tactic from always being “Buy low then sit on the shares until the perfect moment” each player has to worry about their willpower gauge depleting as the tension ramps up or whenever their opponent makes a profit – if yours empties you’ll be unable to trade for a short period of time while you frantically scrub a stylus back and forth across the screen to replenish the gauge (this is definitely not a game to play without a good screen protector on), trying to get back into the fight as quickly as possible for fear of holding on to expensive shares during a big crash or having to watch prices soar and be unable to profit off of this favourable turn of events.

You usually have three different stocks running at the same time during these bouts (you often get to choose some or all of them from your own portfolio), adding another tactical layer to proceedings. Do you spread the financial risk out, cushioning yourself against a volatile stock’s deep plunges in value but never really making a significant profit? Or do you put all your money into one you’re sure is about to go sky-high, knowing one wrong decision could hand your adversary an easy win? Lightning reflexes are required to capitalise on those early bonus percentages, outside meddling through Trading Arts (equippable skills available to both sides) is something you should always keep in mind, and then there’s the sudden jolt of major events to take into account too. Kabu Trader Shun makes stock trading on the DS feel dynamic and exciting. 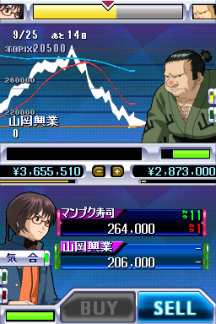 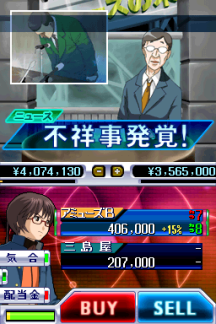 To inject major events with some added drama (and give you a little warning too), they’re always preceded by the price line gradually turning from its usual white into an alarming red and accompanied by an increasingly violent screen shake effect: Nobody knows what’s going to happen, but it’ll definitely be big, either sending prices jumping beyond any previous high or crashing through the floor. The tension here is almost unbearable: do you hold on to your current stock and pray whatever’s coming will make it jump in value? Or do you dump it quick, choosing to make a small profit (or a small loss) rather than risk the battle-losing disaster that could be on the way?

Then the in-game news bulletin flashes on-screen, and you finally know which way this is going to go. Sometimes you’ll see headlines mentioning sudden booms in a particular industry or a hit new product driving a company’s share value through the roof… and sometimes you’ll learn of resignation-inducing scandals and natural disasters, both of which (and more) send prices plummeting.

And that’s when I realised that for all the game-like aspects Kabu Trader Shun has brought to the setting – the trader shop where you buy new skills, the cute little overworld map, the trader rank screen echoing Pokémon‘s trainer ID card – neither it nor you can ever quite get away from the fact you’re supposed to be taking pleasure in playing with large sums of money, you’re supposed to see (generic) environmental disasters come up on the news and think “Great! This is the perfect time to buy back my short stock for a massive profit!“. Your success and progress largely come from being good at having and then spending more money than other people – of course it would, this is officially a “Stock Trade Adventure” – but for all the dialogue in between every confrontation boils down to a bitchy slap-fight between two people with too much money and not enough hobbies to spend it on, the tales of loss and revenge woven through it in an attempt to humanise their actions generally revolving around people making irresponsible decisions with life-changing sums of money for pride’s sake, or getting involved in sinister underhanded deals. Shun’s own decision to become a stock trader after a childhood filled with memories of his dad always being the last parent to pick his child up from the park, of sitting by the front door waiting and waiting for him to return only to receive a letter saying dad is leaving forever in shame after losing an unrecoverable sum of money in a stock market battle, is baffling. I can’t see why he wants to go down this path after all the misery being a trader heaped upon his dad and his family – I can’t see why I should help him go down this path at all. 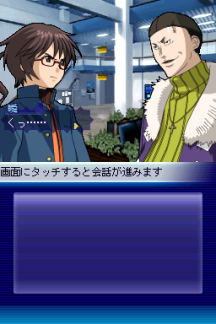 It’s about now my reflexive urge to insist Kabu Trader Shun’s really just another narrow slice of reality expanded upon in an exaggerated anime-like fashion – the same as so many other games – kicks in, and to read anything more into it is ridiculous. But the game gets too deep too often into the real-world tangle of stock trading terminology to be a simple tale of hot-blooded characters shouting at each other during graph-based battles. It doesn’t gamify its subject matter in the way Ace Attorney – a game Kabu Trader Shun deliberately invites comparison to via the bold statement on the front of the box (Roughly “A turnabout is impossible. This is extreme trading.“) – does. If Ace Attorney took Kabu Trader Shun’s tone you wouldn’t be working hard to see justice done, you’d be picking only the wealthiest clients regardless of their innocence and then making sure you billed them for every last second of your time for maximum profit. There’s just no getting around the fact you’re using other people’s livelihoods, their successes and failures, purely to out-money another unrelated person in a willy-waving contest, buying percentages of companies you have no interest in beyond hoping they can make your numbers bigger than your opponent’s.

It’s a good game inextricably tied to a bad setting.

I didn’t need or want the game to pause for a moment just so its titular trader could turn to camera and say “By the way, capitalism is evil.” but Kabu Trader Shun did need to be consciously sillier and more distanced from the real thing if it wanted its otherwise enjoyable fights to not feel, well, morally icky. Even just calling the vast quantities of money used in its white-collar tussles zenny, Capcom’s oft-reused fictional currency, would’ve helped a little (a little). As it stands it really doesn’t matter how much fun the mechanics may be – and there’s no denying that in the moment they’re an odd sort of pleasantly stressful experience – I just don’t want to spend any time with a character who thinks risking millions of yen to potentially profit from a crisis is a fun way to pass the time.

[Ko-fi support made this article a reality! Please consider donating if you can – anything at all makes covering unusual and untranslated games like this much easier!]

One thought on “Fighting over money”