Eldorado Gate Vol. 5 opens with a scenario titled “Monster Hunter Sophie”, accidentally naming Capcom’s wyvern-bopping series over two years before its Japanese PlayStation 2 debut. Unlike the characters in that eventual multi-million selling showstopper, Sophie’s monster hunting manifests as a capturing/summoning system that will no doubt bring Game Freak’s Pokémon series to mind, but in practise bears only superficial similarities to everyone’s favourite Pikachu ’em up.

As you may expect, if she wants a monster on her team she must first weaken it in battle before attempting to capture it (this is done using a magical web-like skill rather than any sort of pocketable ball), but once she’s snagged her prize Eldorado Gate takes this over-familiar idea in a fresh direction. The key difference is these beasts aren’t new best friends to train and play with but untamed monsters temporarily under her command, powerful animals to be summoned to fight alongside her as an AI-controlled unit for the duration of that battle only or consumed as part of her single-hit “Monster Shot” ability, effectively turning them into powerful elemental ammo. To prevent her from blithely hoovering up all the local wildlife there’s a strict limit on the number of monsters she can carry at a time – just five – with no backup storage system. Captured enemies can also be sold for cash, with more powerful examples fetching higher prices and premiums paid for named rare monsters found only in very specific areas too (the local hunter dishes out hints to help narrow down the search and the areas you find them in are small, so searching for them is more fun than frustrating). It’s a brilliant way to inject some new energy to a familiar battle system without throwing everything you’ve learned so far out the window, and as this system’s made for Sophie alone once this chapter’s out of the way exactly how much to you spend viewing dangerous monsters as potential allies is entirely up to you – this is an optional addition, not a forced upheaval of the existing format. 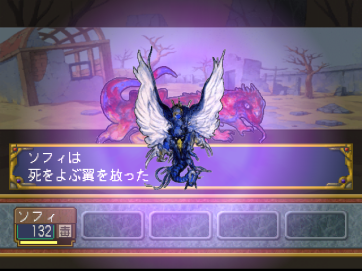 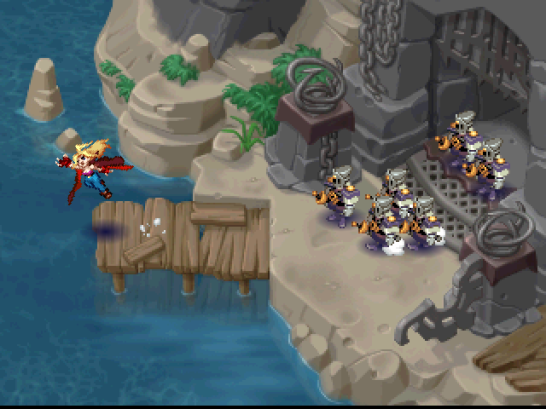 Being able to sell captured creatures for cold, hard, zenny is especially useful as Sophie’s scenario finds her caught up in the business of a tightly-controlled town where money is everything and those that don’t have enough of it are whisked away by what is technically the local law enforcement, sent to toil away in the nearby mines to dig up magic stones in the futile hope of clearing the ridiculously large fines required to set them free. The reason for Sophie’s presence here is down to a promise she made to a doomed mother during her opening sequence – Sophie must deliver a letter to the mother’s beloved son Hans, a young man (and now prisoner) who didn’t even know his only parent had ever left home, never mind was slowly dying in a prison cell somewhere, due to human-impersonating monster shenanigans.

As with the eyewatering sum of zenny you could potentially pay for the circus ticket in the previous volume, you only have to earn a very small portion of the incredible amount of money required to clear Hans “debt”, much of it coming from “capturing” the playable cast and then setting them to work as cooks, waiters, and dancers in the local bar and the remainder easily cleared after selling a few pieces of spare equipment at the vastly inflated prices paid by the town’s weapon shop (to avoid any potential game-breaking abuse, you are prevented from accessing the Land of Destiny’s warehouse all scenario long and all of the remaining money Sophie has on her is taken away forever just before the final boss).

It’s a fun and slightly freeform patch of RPG’ing, and it’s great to see Eldorado Gate take steps to create a true capsule scenario so far into the series, denying players all the useful equipment they’ve casually amassed so far and making them rely entirely on what they can cobble together in a strange new place. The icing on the cake is getting to see tiny Mimi high-kicking on wooden stilts alongside the taller members of the cast, followed later on by the boss monster receiving a cartoonishly exaggerated uppercut from his equally monstrous mother before the pair helpfully leave town forever – I imagine creating an entire series of games at this speed and level of quality must’ve been an absolute nightmare, but as an outsider it only looks like the development team still had the time and the energy to include minor one-off details, even five discs in. 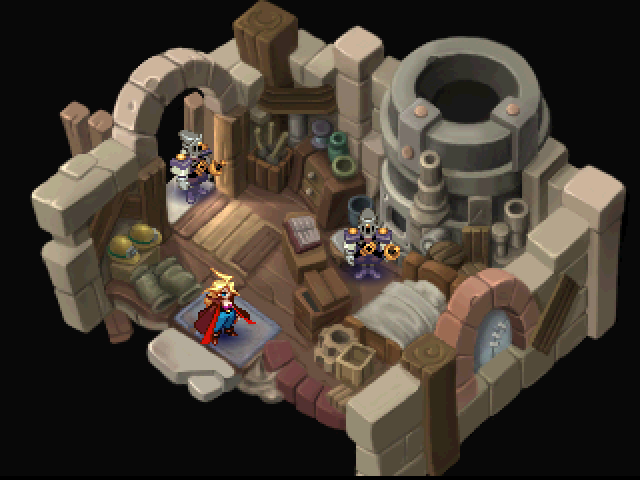 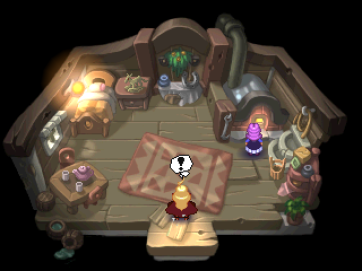 The thirteenth chapter brings us back to Bud and his continuing confused, tearful, rage fuelled by his sister’s traumatic death and the nigh-total subsuming of his spirit by the cursed robo-armour he put on towards the end of the fourth scenario. It all plays out in a pretty predictable fashion, with him finally getting to meet his sister’s spirit after defeating the Soul Eater that wa- I’m sure you can figure out what a Soul Eater was trying to do to a ghost – before she departs peacefully for the afterlife aboard a train filled with other friendly souls.

It should have been the satisfying conclusion to a major unfinished plot thread, but instead Bud remains inconsolably sad – to the point where even now the only sounds he can vocalise are fragments of his sister’s name and a mournful moan – and slumped on the floor of the Land of Destiny.

It makes the ending of this scenario feel a bit flat. It’s not that his ongoing sadness is unjustified, but in an RPG series that thinks nothing of squirrelling away comedy cameos from sentient hardware, Capcom staff, and Dejiko, or just a few hours earlier put some of the main characters in frilly dresses largely because it was a fun thing to do, its begun to feel a little strained to continue down this unchanged path after reaching what seemed to be a natural resolution – especially as this is a plot thread that started three discs ago now (or about six months earlier, if you were buying and playing through these as they came out). 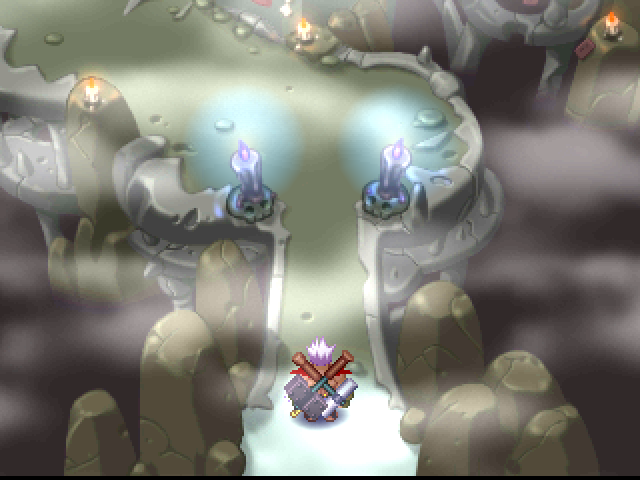 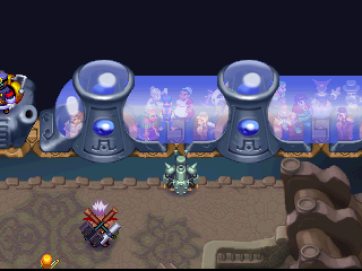 The disc concludes with a scenario that serves as both a Bud follow-up to the Bud follow-up we’ve just had as well as the introduction for another new playable character, Rado. This sword-carrying hot-head accidentally ends up in charge of a band of sky pirates – sadly not the effortlessly cool kind but the “Let’s beat people up and steal their stuff ” sort – and their moveable floating island. This leads to you having to play through several scenes where Rado doesn’t officially condone their “If I can see it, it’s mine” attitude to property or their willingness to rough up any human or monster who dares get in their way (and like true bullies – only so long as their current boss is strong enough to beat up anyone they can’t), but at the same time he doesn’t lift a finger to curb their enthusiasm either, even if at a few points he can be seen quietly hanging his head in shame.

This continues until the sky pirates end up killing a woman, ransacking her stores of magic stones and then disrespectfully reading her diary aloud afterwards and laughing about it as they go – it’s only then that Rado realises he stood by as they murdered the mother of a friendly little boy from the town we met him in, and after some blunt questioning from a recurring supernatural source – is he really going to keep going with the flow instead of walking his own path? – he, with Bud in tow, sets about atoning for his previous inaction.

Rado’s silent transition from the well-liked leader of a cute little local “gang” (the sort with matching shirts and trademark silly pose) to the sort of person who’ll silently watch one of his own underlings laugh after murdering someone is a nice enough idea that doesn’t work in practise. His swift downwards spiral felt at odds with the amusing bravado he displayed in his introduction, and his penance didn’t seem to match the severity of his crimes. 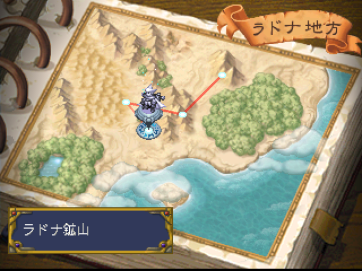 At least Bud’s on hand to keep us from dwelling too long on any of that. At the very end of his opening scenario so many discs ago he was inexplicably whisked away after picking up a baby beast-boy – long story short, it turns out that child, their spirit now awakened, is one of the twelve people Bantross has been studiously gathering together, not Bud. Bud however is asked to care for the baby (who is conveniently more of a glowy, um, baby-thing, that spiritually sits within Bud than a normal baby in need of fresh underwear and bottle feeding), so he remains the one we see and the one add to our party when needed.

As with Sophie’s monster catching, this plot point brings exciting changes to the standard battle system. Bud is uncontrollable in a fight – he’s still barely holding it together even if he is now aware enough to realise who he’s supposed to be fighting – but makes up for it by hitting like a truck full of anvils, but sometimes the baby, named Kobud, cries out instead, causing a battle-wide attack that hurts our party as much as it does the enemy, or rarely unleashes magic more powerful than anything seen so far. It’s this willingness to play around with its own base mechanics, to try and better integrate them into the story it’s trying to tell and let you directly experience what’s going on, that makes the best bits of Eldorado Gate so good.

This final segment of this volume’s trio of tales wraps up with a dramatic appearance from Gigi, the conflicted “holy” knight introduced a disc ago. She and her troops came to the sky pirates little floating island to kill them all off, taking the time to execute individual pirates by hand before using their airship’s divine might to utterly obliterate the floating island, the main cast escaping via hot air balloon in the nick of time.

As with Volume 4, everything in here – from the details so small you might never notice them to Amano’s apparently endless supply of beautiful illustrations – is as good as anything found in any previous disc in the series. Volume 5’s a great RPG that, in a capsule, is a lot of fun, introduces some neat ideas, and doesn’t overstay its welcome. But again I’m really not sure what to make of it now I’ve cleared it. If the final two discs wrap up everything beautifully then this will have been an enjoyable experience on the path to a fantastic climax, in much the same way Falcom’s Trails of… series tends to build up and up and up until the story finally explodes and the preceding two-dozen hours feel less like a lengthy lull and more like the unbearable tension before a huge thunderstorm. But that’s currently a big if. The actual number of hours spent between Eldorado Gate’s numerous title screens and the end credit sequences may be relatively slight compared to other examples of the genre (this disc, as with all the others so far, takes single-digit hours to clear even if you choose to take your time with it), but this volume could have done with giving its players a clear sign that its unusual (and expensive) release format was on the verge of unleashing one heck of a climax.

[I literally couldn’t have written this article without the financial support I receive through Ko-fi! If you’d like to see more otherwise-unfeasibly long dives into niche series like this, please consider donating!]