I am a lowly level one archer standing in the green fields just outside Prontera, whacking Porings and Rockers as I go while catching brief fragments of other people’s conversations – so far, so Ragnarok Online. Only I’m not doing this within the scraggly remains of the official English service, nor a private server, but somewhere else entirely – this is all happening through French Bread‘s PC exclusive (and officially licensed) doujin title Ragnarok Battle Offline.

This is an MMO reimagined as a side-scrolling beat ’em up, taking an impressive number of familiar classes in their male and female forms (with slightly altered movelists depending on the chosen gender) out of their usual home and into the world of single plane 2D combat. 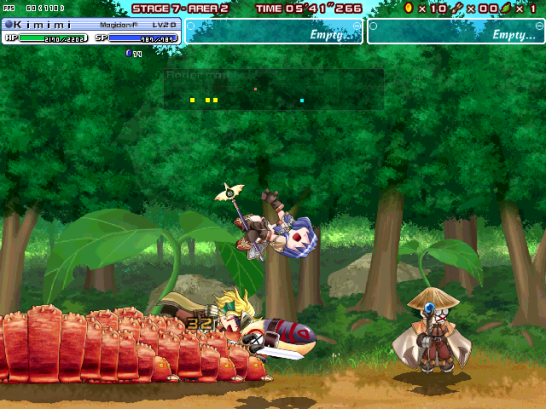 In spite of the dramatic change in genre there’s still plenty in here that will feel immediately familiar to fans of the wildly popular Korean-made MMO. Every monster and location has been plucked directly from the original game, and the restorative items often dropped by defeated enemies are easily recognised as the various herbs, pumpkins, apples, and other common consumables found in the online game. Even your life counter fits the theme, appropriately represented as it is by Ragnarok Online’s Yggdrasil Leaf and helpfully auto-reviving you on the spot if you die. You get three of these leaves per stage, and they’re always free and always fully replenished at the start of each new run – although it’s still best to play carefully and avoid using them if you can, as any left over leaves turn into big XP bonuses when you clear a stage.

Yep, experience points. Just like the game that spawned it and far too many beat ’em ups that came after it, Ragnarok Battle Offline contains an XP/level/skill unlock system. On top of the handy life bonus mentioned above there’s also additional XP awarded based on how quickly you clear a stage as well as how much damage you dished out (hopefully lots), and how much damage you received (hopefully very little). It’s a great way to keep you actively participating in battle even during (entirely optional) repeat runs through old locations, as you always know the extra effort you’ve put into creating a hugely damaging combo will not only be noticed but also bring tangible rewards – in my experience, successfully clearing the most recently unlocked stage always awarded enough XP to instantly level up. And if you exhaust all of your lives before the end? No problem, as dying still awards a smaller amount of XP based entirely on the amount of damage you dealt up to that point. It’s not much, but it’s enough to view the experience as a temporary setback rather than a wasted effort, especially as grinding is truly optional: new areas are balanced around natural progression, rather than repeating earlier quests until you’ve gained [X] amount of levels.

Each level up brings with it a precious clutch of stat and skill points to spend, with certain allocations having an impact on not only a character’s general speed and power but also the special abilities they can use in battle too. The on-disc manual (the paper one inside the case is basically a “How to install the game” sheet) does explain the basics of this system, including exactly what each stat does – even that frequently unexplained stat, luck – but there’s no skill tree to check up on and many of the intricacies of the system are deliberately opaque and left to fan-made FAQs to cover.

As all stat allocations are unsettlingly permanent this lack of guidance is more than a little daunting at first: yes a bit of VIT will help you take a few more hits, but is that really the best use of a point when you’re playing the glass cannon that is the Magician? Should a Swordman really pour everything into STR just because it feels obvious? In spite of – or possibly because of – the potential pitfalls of this freeform spending Ragnarok Battle Offline does feel like a rare case of you personalising your character instead of being nudged towards a common safe build or sent scurrying up a predefined skill tree. In keeping with this belief in true customisation, the concept of “mistakes” is largely relative as every stat brings something useful to every class. INT, for example, boosts a character’s magical defence as well as an Acolyte or Magician’s spell power – so while it’s not something you’d want a Thief to invest masses of points in if they’re struggling to do damage, it would still help them out in another way. 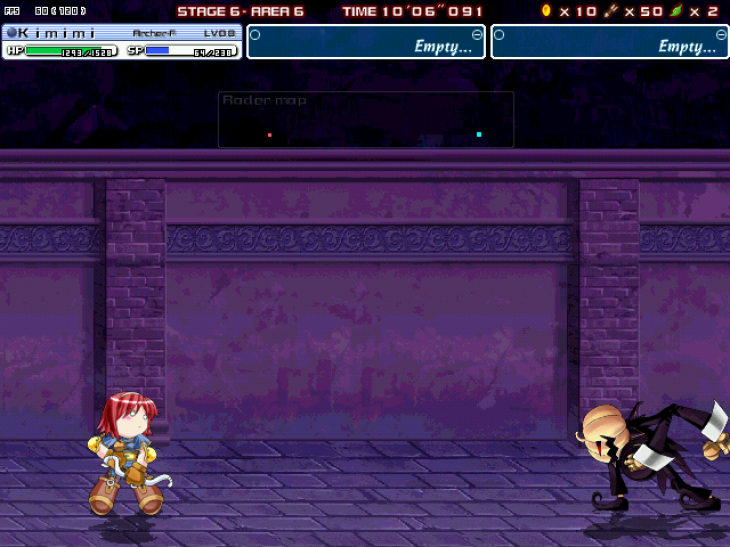 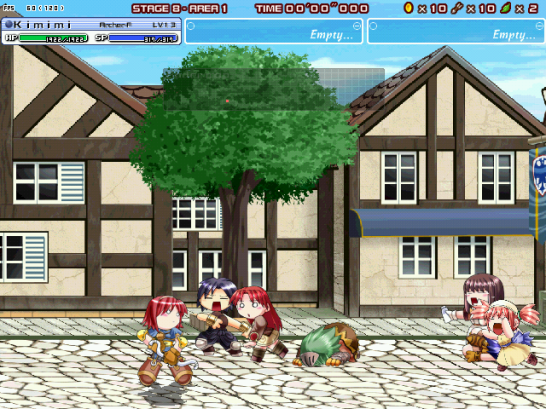 As great as all that is, what if you don’t know or even care what the difference is between a Pecopeco and a Baphomet Junior, and just hoped to play a good beat ’em up? What is Ragnarok Battle Offline beyond a clever use of the source material?

It’s a game that’s more than capable of standing shoulder to shoulder with the likes of Mad Stalker or any other excellent single-plane entry in the genre you can think of. It all comes down to the way fights feel. They’re tactile and energetic, always making you move around, always pushing you to make the best use of your vast range of offensive and defensive options. You can launch enemies skyward and then catch them with mid-jump attacks before they fall, duck under incoming projectiles (height/size permitting) or even knock them out of the air – and if you do get hit a quick tap of the attack button will usually see you recover before you land, keeping you on the offensive or giving you the time to hold down the dedicated guard button before a devastating multi-hit blast hits its mark.

The amount of detail in here is just incredible. There are anti-air attacks waiting to be unleashed at the right moment, protective buffs to apply to yourself or other players (up to three people can play together), and powerful blows capable of knocking back even the biggest and beefiest orcs. Even crouching has another purpose, as sitting for a while recovers your HP and SP for free – so long as you can stand the bonus XP loss caused by taking longer to clear the stage. Everything you can do has a purpose, every enemy you face can be dealt with calmly and intelligently. 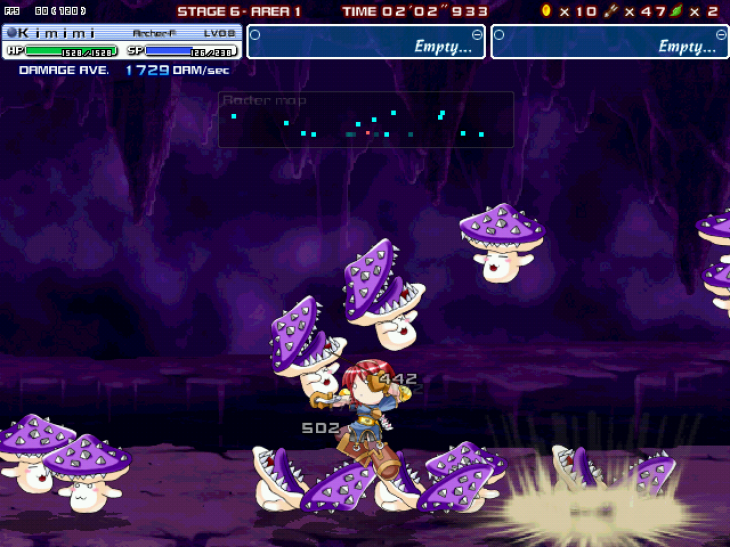 Ragnarok Battle Offline’s stages are equally imaginative. Every location seems to bring something new, from dark caves that reduce your field of vision to a claustrophobic circle to foreground details deliberately hiding small enemies – you always believe you’re fighting in a place, rather than on top of a scrolling picture. The sort of enemies you face can differ greatly from one group to the very next too, each and every one asking you to tailor your strategy to match. There are some monsters that can only be damaged if you hit a specific spot, zippy ones that like to charge straight for you, weak ones that try to overwhelm you with sheer numbers, and some are even capable of temporarily trapping or poisoning you too. There’s a nigh-ridiculous number of mid-bosses in there as well – the first stage alone has five.

Exactly how you deal with all this depends on the class – even the gender of the class – you’ve chosen to play, with high DPS (tracked by a handy on-screen display) relying on anything from skilful air dashing to perfectly timed magic casting to tactical resource management. Part of what makes the game so much fun to play is that learning how these abilities work and how best to use them matters. Assuming there’s not a ridiculous gap between the two, a weak character in the hands of an experienced player will definitely last longer and do more damage than a stronger one controlled by a beginner, your own input is always far more important than the number of skill points spent. 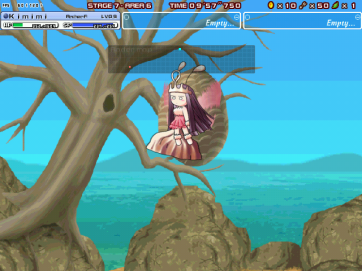 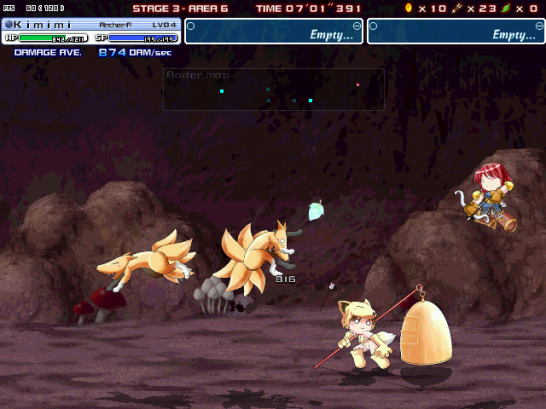 Ragnarok Battle Offline even finds the time to add a little humour into the action. There’s a two-part battle against a mermaid that first sees her challenge you on land with predictably rubbish results, only to return later for a true fight after the stage has been flooded. There’s a baby Picky with an attitude problem serving as a silly one-hit KO “boss”. Even background “player” characters sometimes get in on the act: There’s a great little scene where another player dies while fighting a swarm of enemies, prompting an easily-missed bit of chatter from them along the lines of:

The game is bursting with love for every facet of Ragnarok Online: the relaxed chatter, the idling players, the vast crowds milling about in popular areas, the slight anarchy of other real people doing and saying whatever they like within this colourful fantasy world. You’ll find bots farming enemies and characters pulling “aggro trains” of local mobs – if you’ve ever played an MMO from that era you’ll no doubt end up nostalgically smiling at these universal antics. But it’s also a game that still takes great care to ensure offline Ragnarok is fun in its own right, that it has something meaningful and entertaining to offer those who don’t want to play Remembering Things: The Game.

The hobby would be a better place if more spinoffs balanced their references with their borrowed genres as thoughtfully as Ragnarok Battle Offline does.

[Ko-fi supporters read this a week ago!]