How could I possibly resist a Shin Megami Tensei themed SRPG, the happy combination of two of my favourite things – tiny people waiting to be ordered around a large map and demon-infested 90’s cyberpunk? And oh, that soundtrack! Hidehito Aoki‘s work on Majin Tensei‘s soundtrack is just superb, a sort of dark industrial goth rock via the SNES’ soft-sounding S-SMP chip, a memorable mix of frenzied church organ and deep growling undertones. It reminded me of Devil Crash‘s masterpiece of a main tune in places, it’s just that good.

As I’m sure you’ll see from the screenshots below the in-battle artwork is beyond amazing, each and every imaginative demon using a vast amount of screen space to display some of the best pixel art on the entire system. They’re slightly animated too – a flapping of wings, a wagging jaw, a strand of hair moving in the breeze… a few pixels worth of eyes flickering in an underwhelming way in some demon’s head – and sadly that’s the beginning of the end for anything positive I can say about this game.

The uncomfortable truth is those tokenistic animations I mentioned above are easily outdone in terms of quantity of frames used and the motions expressed by any standard enemy attack found within 1987’s Master System hit, Phantasy Star, and totally outclassed by every battle scene in the original Famicom Fire Emblem. Majin Tensei has no character movements, no quick dodges, no one raising an arm aloft before a freezing Bufu rains down – the view doesn’t even shift between attacker and attacked. As single pieces of art I absolutely cannot fault the images themselves, but they completely fail to communicate any sense of violent energy or supernatural danger.

And all that space used on gorgeous images seems to have impacted the amount of room left for precious kanji, the game using a kana-only font with utterly hideous spacing that leaves every line spoken the Japanese equivalent of TALKINGLIKETHISALLTHETIMENONOPUNCTUATIONFORYOUORANYBODYEVER. It’s like someone found a way to write the way nails down a chalkboard feels, and I genuinely found the dialogue difficult to read because of it. 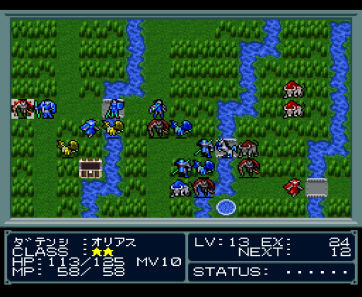 These questionable chinks in the presentation’s armour could be brushed aside if the actual SRPG-ing was good fun, but again Majin Tensei stumbles. A lot of what’s in here exists because it was in Shin Megami Tensei, and not because it actually improves this particular game in any way. Take talking to demons, for example: It’s a defining part of the MegaTen experience so it’s no surprise to learn it’s present here and operates in a very similar fashion to any other game in the series, as you beg and barter with the occult to try and win their loyalty. The big difference is that this is now happening in a turn based SRPG with an auto counterattack system, meaning if the person being attacked survives an assault, they always instantly retaliate with a full-power blow of their own. In many other games in the genre this feature is something of a time-saver as your troops finish off weakened foes without you having to do anything at all, but here it’s actually quite irritating as it’s far too easy to counter an enemy you were hoping to strike up a conversation with on your next turn into oblivion, their potential help lost forever through no fault of your own.

Any demons that do survive long enough to be persuaded to join your cause can be merged together to create new and hopefully more powerful beings at the usual candlelit services found on the world map – or smushed together out on the battlefield (just move one unit into the same space as another ally). The trouble is there’s no good reason why you should. They’re not stronger for being fused in the heat of battle and there’s no tactical advantage to taking two and permanently making them one in the middle of a fight, it’s just something you can do – and it’s more hassle to summon and then move units together than picking them off the traditional list and finding a pairing you really want to create.

Moon phases are back, advancing by 1/8th each turn, and as you’d expect they affect demon strength as well as the menagerie of greater and lesser deities willingness to listen to your mid-battle recruitment pitches. Again it’s a nice idea but in practise the differences in damage given and received is so mild as to be virtually irrelevant. I should’ve feared mighty dragons standing close by during a full moon, worried if my own demonic troops would still obey my orders when this lunar interference was at its peak, or felt it was worth rushing in for the kill on moonless night when these monsters were at their weakest, but it simply doesn’t matter enough to be worth considering. 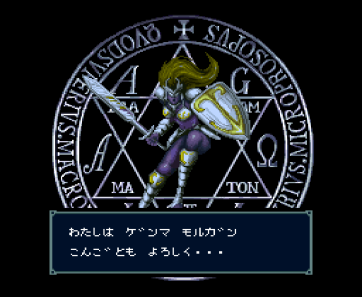 None of this is helped by the fact that the game’s MegaTen roots have created an SRPG that’s virtually impossible to balance because who you recruit, who you fuse together, when you fuse them together, who you bring out to fight, and where you invest your hero and heroine’s stat points will vary greatly from one player to the next.

You can feel this uncertainty in every battlefield, casting doubt over every difficulty you face. Is this scenario hard because my strategy needs some work, or is it hard because I fused together demons B and E instead of B and D? Did that chest I left behind two battles ago contain some armour that’d really help me out right now, or another shiny amethyst? Should I have spent one more turn trying to get that demon on the previous map to join me, or wouldn’t they have made a difference? Because it’s hard to pinpoint any particular failing it’s hard to know what corrective action to take, and the defeats you do encounter weigh heavily on your patience rather than inflame your gaming soul. The only real solution with guaranteed results is of course to take a trip back to one of the repeatable battles on the overworld map and grind out a few levels for the renamable hero and heroine, eventually turning them into unstoppable forces in their own right and largely bypassing the whole demon summoning bit of the game. It’s a practical if disappointing solution to a game gives the impression it wants you to think tactically. 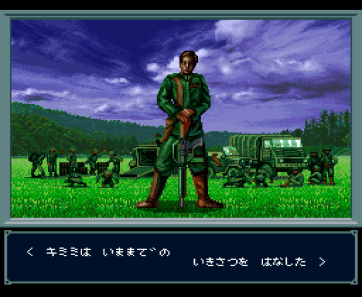 Majin Tensei feels like a game forced into existence, a publicly playable experiment trying to work out if Shin Megami Tensei’s template could be applied to an SRPGIt’s definitely a fascinating idea and one I wanted to praise, but with the SNES library easily proving that imaginative takes on 16-bit strategy were more than possible on the hardware it’s clear there’s just no need for Majin Tensei to be as resoundingly underwhelming as it is. rather than the natural conclusion of a great idea. The terrain feels decorative and disconnected, often bearing little resemblance to anything on the overworld map around it and having little strategic interest even when it does. Enemy placement has no synergy to it –  the demons are such a mush of differing types with overlapping abilities the only real strategy is “Take out anything that can heal first” (and there are so many anythings capable of fully healing their hostile friends). There are no archer-types sniping from high hills, no sneaky thieves stealing treasure and unlocking doors before you, no half-hidden side entrances to the boss’ enclave to exploit.

It’s definitely a fascinating idea and one I wanted to praise because it could have been brilliant, but with the SNES library repeatedly proving that imaginative takes on 16-bit strategy were more than possible on the hardware (not to mention Tactics Ogre, Fire Emblem, and all the rest) it’s clear there’s just no need for Majin Tensei to be as resoundingly underwhelming as it is.

[Ko-fi support keeps this site going! If you like what I do and like the idea of making my writing life a little easier, please consider supporting me!]

One thought on “HUGE art… and really tiny scraps of strategy”