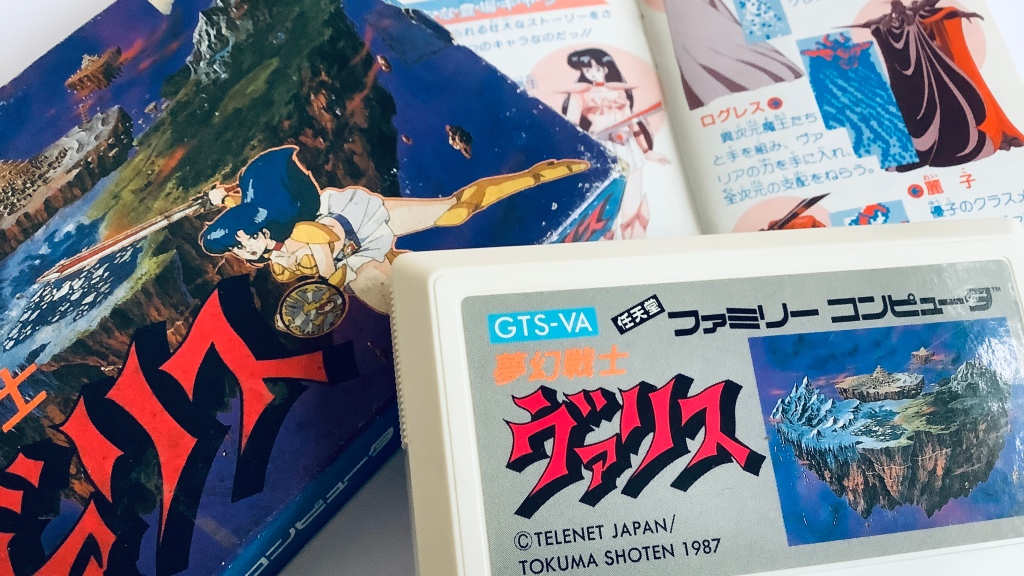 This Famicom port of Mugen Senshi Valis is a picture-perfect example of how fast and loose early ports could treat their subject matter, a pre-existing brand seen as a list of ideas more than it was a list of unbreakable rules. Released in 1987, a year after the PC-88, FM-7, and PC-98 versions of the first Valis and a good long while before either of the Mega Drive and PC Engine remakes, this extensive reimagining of Yuko’s debut adventure presents players with a spirited mash of ambitious ideas rather than the mostly linear action stages found elsewhere.

These once acceptable game development attitudes see Valis transformed into a free-roaming action adventure, broadly speaking along the same lines as Castlevania II: Simon’s Quest and Zelda II: The Adventure of Link (interestingly enough, both of them released the same year as Famicom Valis). There are NPCs waiting to be spoken to, permanent weapon upgrades to find, new pieces of equipment to acquire, and bosses to track down and fight.

It often feels like you’re walking through history, every feature you encounter an attempt to provide an answer to an enthusiastic line of questioning made in a planning meeting decades ago. What sort of heroine can only walk from left to right? If the star character’s walking down a city street, why shouldn’t she be able to walk down the unblocked road in the background? Why can’t she just walk back to a previous area to collect anything she missed? If regular maps don’t have big arrows on them showing exactly where you need to go, why should ours – exploring strange new places is fun, right? Wouldn’t it be great if the buildings we put in the background were more than just decoration? Imagine they had people in them who could talk to you, and even give you items! Oh, and what if sometimes there were monsters lurking inside these homes who sapped your health instead? Wouldn’t that be a great surprise? 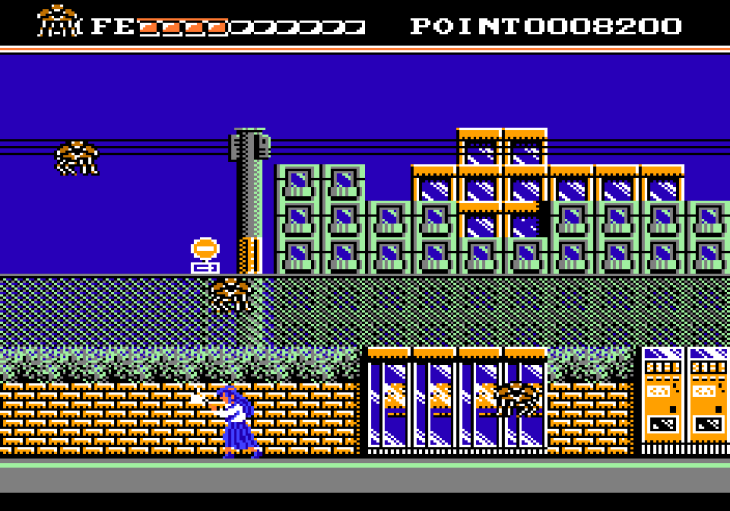 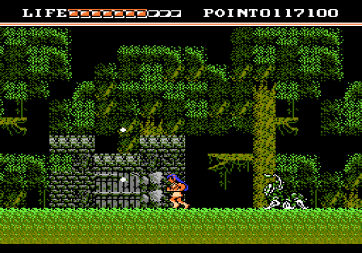 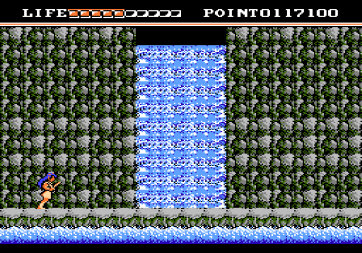 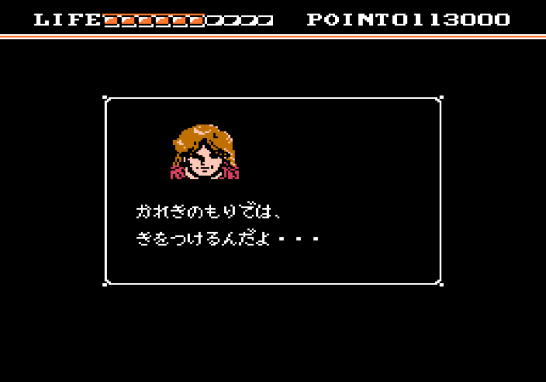 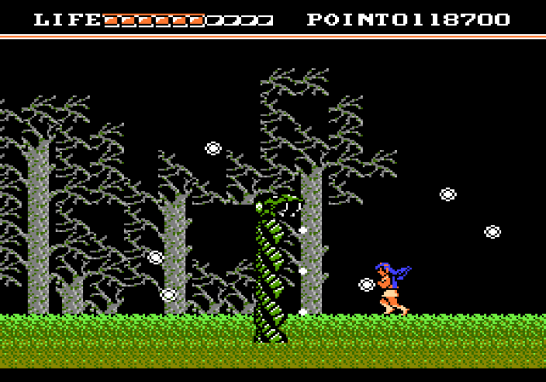 Do any of these grandiose ideas work after making the leap from design sheet to game? Oh no. Hell no. From the very first stage it’s clear the game’s an utter mess: It’s loose structure directionless rather than liberating, the contents of Valis’ nondescript dwellings anything from completely frivolous to utterly indispensable to actively harmful. The map you can pull up (once you’ve found it) to help get your bearings is an almost cruel waste of everyone’s time, the “you are here” marker jumping around like a grasshopper on energy drinks, it’s movement neither reflecting the distance you’ve travelled nor the paths you’ve taken. Death comes swiftly and often until you find the shield silently waiting in the jungle stage (about the halfway point of the game), and once you’ve grabbed that helpful item you realise keeping Yuko alive for longer only means you end up spending even more time playing Famicom Valis, and that isn’t the big win you thought it’d be.

But as often as the game unquestionably fails there’s never any doubt it’s always working in earnest to be something special, something more, something expansive and different and interactive and brave. Valis is an honest attempt to represent something game design language hadn’t quite worked out how to express yet, and didn’t have the technical power to pull off as an action adventure anyway.

Having said that, there are times when this desire for the game to be more than just monoscrolling strips of action really shines through, Valis genuinely surprising you in the process. As I was exploring the second area I found a conspicuous gaping chasm on one screen, something the game had never presented me with before. I leapt down partly because I thought it looked interesting – and partly because even if the hole did instantly kill me off the outcome really wouldn’t be all that different from the infinitely respawning enemies everywhere else doing the same thing, so I had nothing to lose either way. Something magical happened after I fell off the bottom of the screen: I ended up in a strange dark level filled with what looked like dirt and vines (and more infinitely respawning enemies). It felt dangerous and claustrophobic, as though I was truly the first person to ever set foot in this place – as though I was creating a wild story all of my own about the level hidden beneath the level – and I blindly roamed this astonishing underworld for a short while before stumbling upon an exit that spat me back out at the top of a well in a different part of the level I’d leapt down from. The execution may be way, way, off but the idea, of descending below and actually, visually, being underneath, and then logically using that to have Yuko come “up” elsewhere, somewhere new and out of a specific background prop – I couldn’t find fault with the concept even if I wanted to. 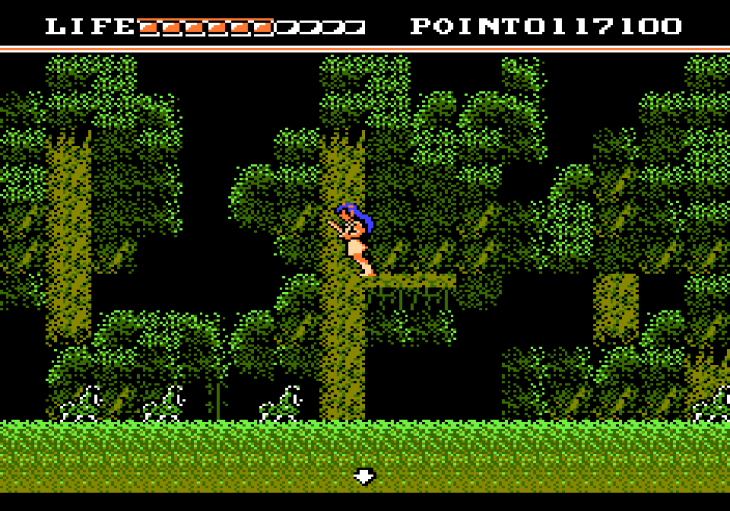 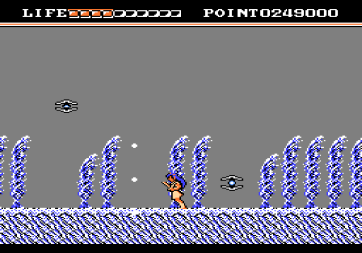 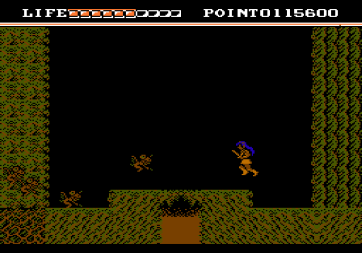 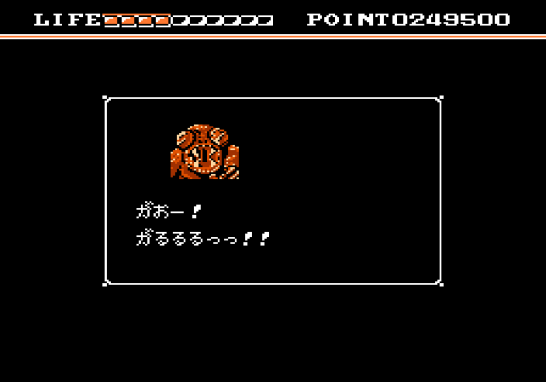 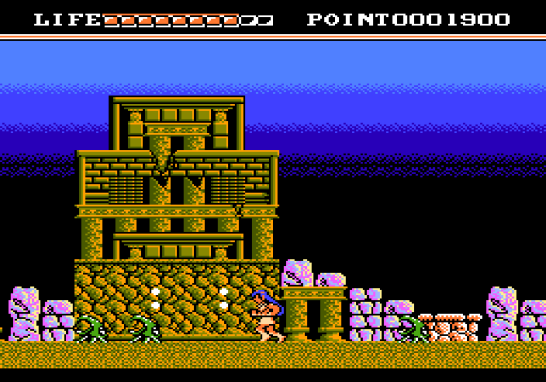 Less praiseworthy are the completely unmarked exits leading into the background (the omission made all the more baffling by the fact all foreground exits are marked by an arrow), or the way most areas fail to visually connect with each other in any shape or form. There’s every chance exiting one screen right will probably leave you standing in front of a black rectangle with new exits leading off to the right and the left, or two foreground arrows placed pixels apart on the ground will see you emerge in completely disconnected screens a million miles apart if your map is to be believed.

At least when you die (and this is one of those games where death is a case of when, not if) you get to restart as many times as you like with any key items you’ve discovered along the way still in your possession. This sounds great… until you realise how Valis is structured.

Each stage is a distinct area – ruins, snowy mountains, jungle, and so on – with its own boss and its own unique (and sometimes essential) items to discover. The thing is most of these place are interconnected in some way – you reach the snowy area from the jungle area, and you can only get to the jungle area via the ruins. It’s another impressive idea – this is happening only around a year after Metroid‘s Famicom Disk System debut after all – that doesn’t work. In an attempt to present the ruins area as a “hub” of sorts, that’s generally the place you return to if you die: and it’s one of the most utterly miserable mazes I’ve ever had the displeasure of playing through. Successfully trekking through those nonsense squiggles once is an achievement in itself, so knowing later on it may be one of several whole stages you have to muddle through to reach the location you died in (and Yuko only has one life to lose in the first place), and there’s also little to stop you from dying again on the way there, washes away any pleasure you may have derived from your earlier hard-won progress.

So it’s not a lot of fun, but even so you still might want to experience anyway. This is a tantalising glimpse at an almost game, at something clearly eager to prove it can do so much more than merely retread the same path the computer games that came before it already walked. It’s not enjoyable, but the Famicom’s reimagining of Valis is definitely fascinating.

[Ko-fi supporters made this article a reality – and they got to read it a week early too! Why not click on over and join in?]