Dempa’s X68000 remake of Falcom’s eternally popular Ys: Ancient Ys Vanished opens with a superb digitised recreation of the sumptuous Yoshitaka Amano illustration found on the front of the game’s box. As first impressions go, this would have been about as perfect as anyone could’ve hoped for… if only any care at all had been taken to ensure the image actually filled the 4:3 screen, or if someone had made the effort to mask the painfully obvious empty space on either side with an ornate border or even just switched out the thick black bars with a complimentary colour. I initially assumed this was a setting or emulation issue, an honest mistake from an idiot with a fondness for floppies and a little space on the internet to call her own. Sadly, it’s not. The “Ys” text overlay touches both edges of the screen – the screen, not the displayed artwork – as it zooms into view, and the manual helpfully shows a photograph of the same image looking exactly as it does to me (and to you in one of the screenshots below), confirming this is intentional and I’m seeing the exact same thing the developer’s saw. 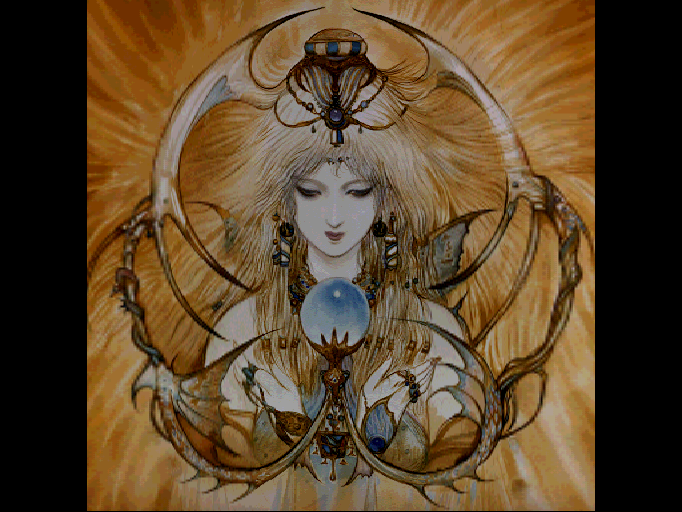 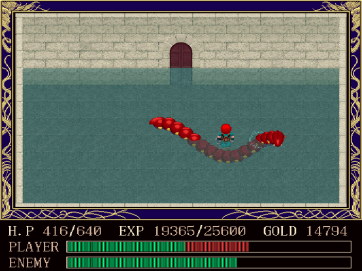 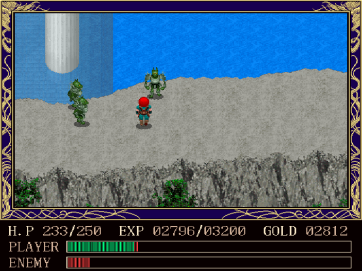 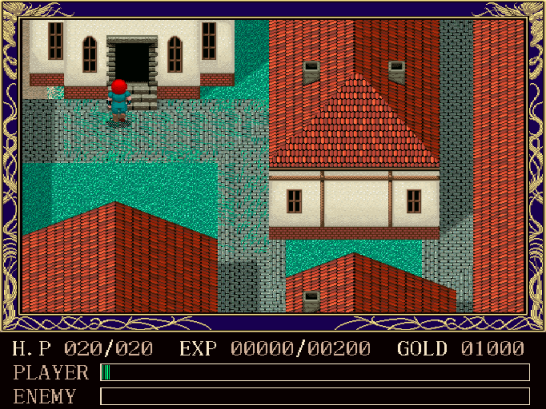 This bizarre conflict between something obviously beautiful and its questionable implementation is a recurring problem for the X68000 port: It’s very pretty, all new, technically impressive… and also consistently wrong enough in some obviously avoidable way to spoil its own good ideas.

Of course this isn’t the first time an unrelated third party has put their own spin on this classic RPG, and over the years Adol’s debut adventure has been remade and reimagined with varying degrees of success on, amongst other formats, the DS, Master System, and PC Engine. But this X68000 remake should have been one of the very best of the bunch, at least leaving every non-CD version of the game in its hi-tech dust. It wasn’t a remake bundled up as part of a general Falcom retro compilation generations later the way the Saturn version was, and it wasn’t a quick port to weaker hardware the way the Famicom release was either. It should’ve been Ys: Deluxe, a premium-quality title made exclusively for hardware more than capable of producing nigh-perfect ports of contemporary arcade games, but instead it’s Ys: I Guess? , a painfully passable take on a game that always feels dynamic and exceptional in its creator’s hands.

Even the game’s packaging manages to underwhelm, a collective shrug bound in plastic and paper. On other, earlier, computer formats Ys came with a hardback manual bursting with stunning artwork and page after page of lore as standard, and it’s disc sleeves resembled lavish leather bound tomes, matching the box’s equally ornate design. This in contrast comes in a small squarish box with a thin monochrome pamphlet for company, and the most interesting thing about the entire set is the fold-out brochure asking people to apply to work at Falcom on their (then-unnamed) upcoming game, Brandish. This matters because the lack of paperwork throws out a huge chunk of world building – world building the game simply doesn’t have without it – and it gives the impression that doesn’t matter. In an RPG. An RPG that, for the time, was trying to be epic and mind-blowing and thrilling. There’s no question Ys is special because it’s a good game, but it’s extra special because it’s always bought into its own self-appointed status as an “event”, as something no player should miss out on. 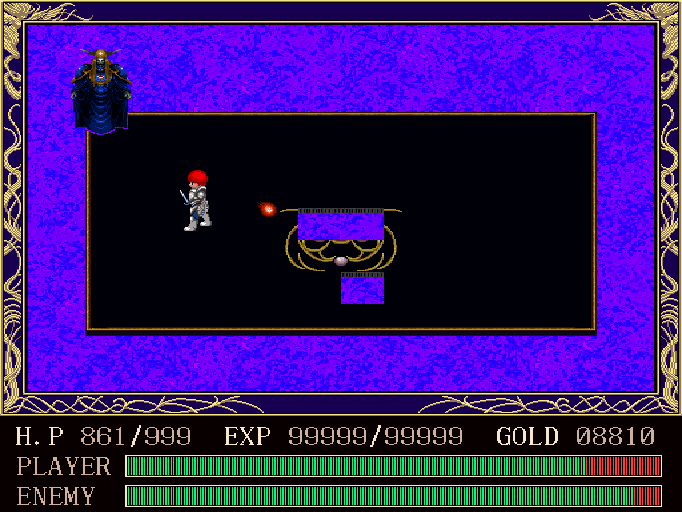 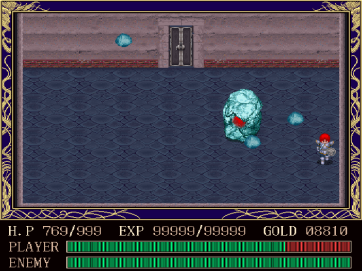 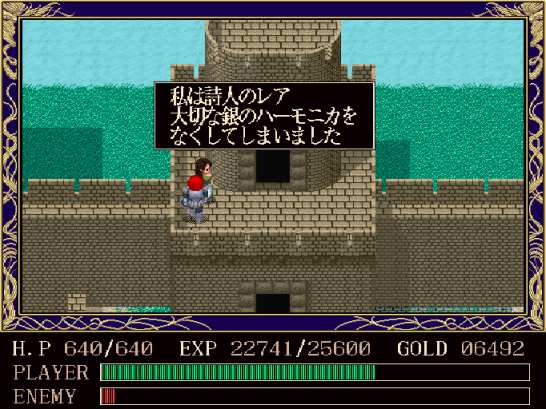 Let’s try to back up my general frustrations by highlighting a few specific examples.

The north wall in the first boss room is inexplicably missing its distinctive mural, and it doesn’t slide apart after the flappy-clothed necromance-ish chap’s been defeated to reveal the entrance to the rest of the shrine either. It’s just a rectangular room in a game that is not short of rectangular rooms, rather than the secret entrance to a mysterious location. That’s disappointing enough but to make matters worse the flames that shoot out of either side of this arena – basically the only danger on screen all fight long – don’t come out of little dragon statues placed in neat rows any more but just appear out of thin air. Why? It used to look like Adol had triggered an ancient trap, and now it’s just something that happens because it’s supposed to. Venture further in and you’ll discover the shrine’s final battle isn’t against a stone carving that’s magically come to life, it’s against a segmented red snake in (new) waist-high water. In spite of their limitations Falcom’s originals were a window into Adol’s adventures, whereas the presentation here brings the experience closer to “Boss A in Room 12”.

This lack of personality also extends to the X68000 port’s character portraits, every one redrawn in a quasi-realistic style that once again sacrifices Falcom’s artistic flair in a misguided attempt to wow players with “better” detail. The faces seen here clearly look more traditionally human than the heavily dithered and often yellow-skinned people found on more basic hardware, but they’re also so much plainer than their “lesser” counterparts too, making this tale of ancient towers, twin goddesses, and a brave wanderer willing to run head-first into hordes of monsters feel, well, ordinary.

Over and over again X68000 Ys presents its players with something that technically looks better than the original – everything is clearly running at a higher resolution and using more colours than the PC-88, MSX, or PC-98 could ever dream of throwing onto the screen at once (some details are even prerendered CG) – but it never feels special. 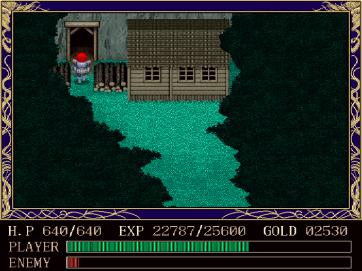 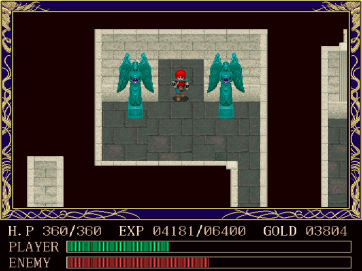 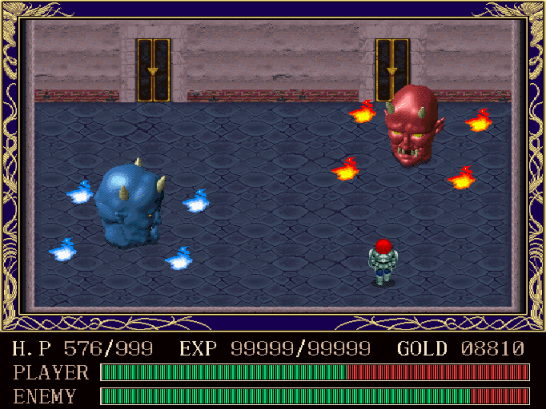 Starting this feature off on a negative point and then swiftly moving on to mention several others encountered along the way is in some ways unfair: This is still Ys, Ys is fundamentally a good game, and this still hews close enough to the original’s magic formula for it to generally feel fun and sharp and familiar. Some of the changes in here are entirely positive in my eyes – especially the way Adol’s sprite accurately reflects the equipment he’s currently wearing, right down to the intricate design shown on his shield. The CG art used on a few bosses actually looks pretty good – not enough to make me wish they’d recreated everything using that technique, but enough for them to feel different, rather than ruined. I even like the significant alterations to some of the early maps, transforming a few mazes into enjoyably short and straightforward areas that make backtracking into town after a few careful level ups for another vital piece of equipment not only possible, but actually a great idea.

But as not awful as it objectively is, knowing it could’ve been the showstopping computer version of the game and yet somehow definitely isn’t ultimately taints the experience. It’s outshone on its own format by the X68000’s excellent port of Ys III as well as original titles along broadly similar lines like Étoile Princesse. It had all the tricky design business sorted out before anyone responsible for this port set fingers to keyboard and it exclusively targeted relatively powerful hardware that left the developer with virtually no excuses for omitting visual details already present on older machines.

[This article wouldn’t have been possible without the support I receive through Ko-fi!]

One thought on “Ancient style vanished”