Barely a minute into Super Wing Commander and I’ve already hit a big and on reflection very obvious problem: How the heck am I supposed to control this 3DO (and Mac) remake of Origin’s sci-fi flight sim classic using the console’s five button controller? On DOS PCs (and in the game’s other computer ports too) this was the sort of game where every key on a keyboard seemed to do something important, from altering flight speed to changing the view, so what the heck am I supposed to do here?

There just aren’t enough inputs to go around – a simple fact that’s swiftly confirmed by the instruction manual, which devotes a few pages to the various multi-button combinations you need to remember to handle everything from bringing up the comms menu to switching missile types. It should be a disaster (and it is a bit like playing Twister with your fingers at times) but honestly? After a few missions I was fine with it. It’s not great, but I’d be lying if I said I wasn’t able to do what I needed to do when I needed to do it – and I this was still true even when I was dogfighting in a literal minefield (in space!).

The all-new voice acting though… wow, as Maniac memorably mangles in the video above. (and was the inspiration for this article’s unhelpful title). It’s… it’s… Well, you can hear it for yourself – if you dare.

In all seriousness I do try to be charitable when this sort of aural torment shows up, as in these CD-enhanced early days a voice actor’s recording session could be little more than a case of plonking a quick printout of the script and whatever microphone someone had lying around in front of a vaguely willing colleague/relative/friend and hoping for the best. Having said that, there’s no use pretending the quality of the dialogue here – made for what was at the time a premium-priced entertainment standard hoping to usher in a brave multimedia future – matches the slick sci-fi shenanigans Wing Commander aims for. Line delivery is stilted and uneven across the board, which gives the unfortunate impression everyone’s first and only take made it into the final game (and if that were the case, that’d more likely be a budget/planning issue rather than a case of lack of acting talent). The mission debriefing segments should be praised for attempting to cover the wide range of potential outcomes with actual spoken dialogue (these are the parts where Colonel Halcyon comments on the number of kills you and your wingman racked up, as well as other notable events) – it’s just a shame the end result sounds like a badly spliced together customer service phone menu:

“You killed… THREE… furballs [pause] and Angel got… ONE… Dismissed.”

At least the script conveyed via this risible audio is largely the same as it ever was and if you can tolerate the awful accents Wing Commander’s dialogue is not only interesting but often genuinely useful, as best shown in the optional conversations you can have with other pilots in the bar. Stick around to tilt a glass with Paladin or chat to Spirit and you’ll pick up juicy rumours on prototype fighters, hear about the devious tactics used by notable enemy pilots, and learn important quirks in the way certain classes of Kilrathi ships fly. You’ll also learn which pilots like to embellish their own tales, prefer to rely on hard data rather than their gut instinct, or readily interject in a friend’s conversation too. It’s a warm and entertaining way to impart additional information, and remains a high point of not only Wing Commander but gaming in general.

Of mild interest to some will be the way speech is handled in the Japanese copy I bought (purely out of habit – as far as I know there’s no reason to avoid any other version of the game): Combat and a few cutscenes use Japanese dubs, while everything else retains the original English voiceover work, accompanied by some rather bland subtitles that choose to pretend accents and more colourful turns of phrase don’t exist rather than try to reinterpret them. It’s in some ways a sensible approach, assuming time or budget concerns prevented a full dub – glancing at some subtitles in the middle of a dogfight would get most people killed – but the constant switching between two languages never stops feeling jarring and unnatural. 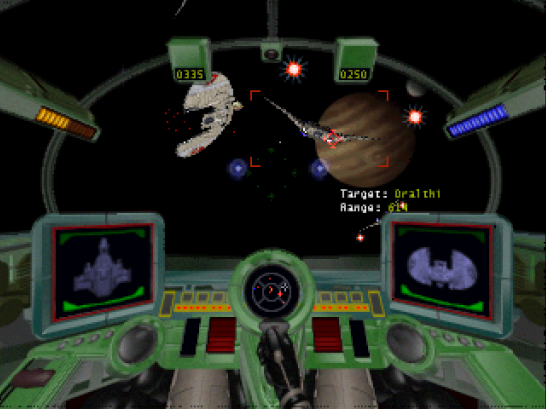 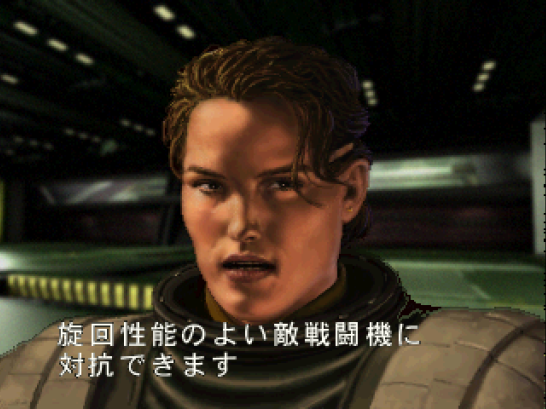 Underneath the reworked presentation this is all largely the same Wing Commander it’s always been, and that’s a brilliant space adventure that’s just “movie” enough to feel epic while still being “sim” enough for you to feel in complete control of a ship that could suddenly have any number of life-threatening problems.

I adore Wing Commander’s damage system. The wide range of potential faults with your ship make your interaction with it feel so much more detailed than the relatively straightforward shot, shield, and speed control features actually are, and all the ways an easy battle can go suddenly very wrong – one bad hit potentially shattering your radar or damaging your ejector system – turn every single encounter into an ever-changing game of hunter and hunted. Best of all is the way you just have to deal with whatever state a fight leaves you in for the rest of the mission, even when only one gun sort-of works and the comm screen’s playing constant static. Nothing is quite as exciting as seeing your shield generator sustain heavy damage as a feared Kilrathi pilot appears on the radar, or having to fight with unpredictable speed control through an asteroid field after taking a hit to the accelerator.

The world outside your cockpit is just as volatile, the scripted “surprise” enemy squadrons near a nav point your were told should be clear just the predictable tip of an enormous and astonishingly malleable iceberg. For example: a hot-headed wingman may not obey orders in the heat of the moment, not even when being ordered to fly back to base could literally save their lives. What makes Wing Commander so special is what happens after this, the way you’re forced make do with the consequences of your own and other people’s actions. If another pilot dies you don’t automatically fail the mission, you attend their funeral and carry on without them instead. And if you do fail a mission? Well, that’s just war, isn’t it? Keep on failing and you’ll miss out on promotions, get passed over when the chance to fly fancy experimental space fighters comes up, and you and everyone else will have to deal with than Terran Confederation being on the back foot and losing ground to the alien catpeople, the missions and systems you visit completely different (and appropriately more difficult) from those you go to if you succeed a “chapter” (read: star system), thanks to the game’s branching route system. You don’t need to believe your actions have consequences here, because it’s so obvious every major thing you do or don’t do has a measurable and lasting impact on the entire campaign.

That’s only true for the main storyline though, and the “Secret Missions” that come afterwards are simplified to the point they pretty much draw a straight line from one sortie to the next. In its original DOS form as separately sold “further adventures” style expansion packs this made some sense, but Super Wing Commander unfortunately mushes the original game and the extended scenarios all together into one long experience with no real breaks or any attempt to explain the sudden change. This fudging also rather spoils the ending of the original game, as the storyline builds towards a dramatic climax and then… “OK so here’s your next assignment” [paraphrased], as if everything you’ve just done, including pushing the Kilrathi out of the Vega system (and probably killing a bunch of their finest pilots while you were at it), wasn’t all that big of a deal. It needed some sort of proper break – an extended medal ceremony, a knees-up at the bar, even just plain recognition you’d as a player had cleared a distinct segment of the game – but instead all you get is a brief cutscene of a few ships flying by.

I stopped playing shortly after that point, even though Super Wing Commander apparently has some truly new content tucked away (even) further in. Nothing feels quite as deflating as doing a hero’s job and having the only reward be even more work. Wing Commander is great. The Secret Missions are great. But without a discernible gap between the two it feels like too much of the same all at once. 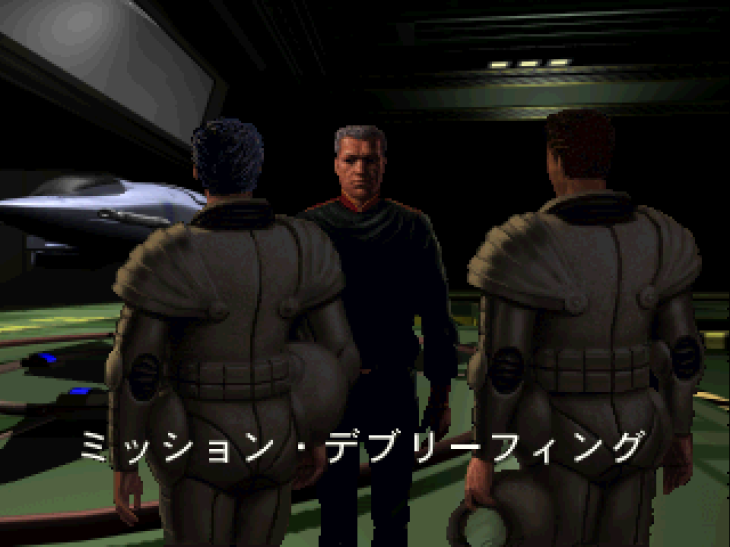 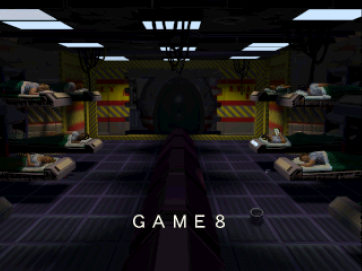 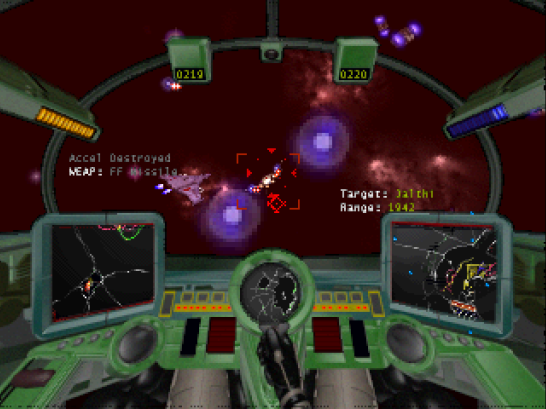 It’s a bit of an awkward update; one that on the whole isn’t different enough to be worth hunting down, and when it is different it’s with mixed success: The redesigned ships for example range from the odd case of “Why would you ever mess with a classic?” (the Tiger’s Claw) to a more general “It’s not bad but it’s not better either“. The setting keeps telling us this we’re at the sharp end of a long-running conflict between two warring species – a bit bit Top Gun, a bit Star Wars rebel alliance – and under these circumstances you’d expect the ships to look a bit bashed and worn (like they used to), but instead they all look factory-fresh and CG-smooth.

It isn’t however a bad port, in spite of my grumblings. Super Wing Commander’s changes are generally misguided or flubbed, but most of the time the game’s just plain old Wing Commander given a fresh lick of paint and running on a console that can handle its memorable mix of 3D space represented by 2D sprites without resorting to slideshow-like screen updates or slow response times – and plain old Wing Commander, even under these conditions, is always a heck of a lot of fun.

[Ko-fi supporters made this happen! Please consider joining them – and getting every article a week early – if you can!]